"This will limit the GBP’s ability to recover (to near 1.58 at most) and support the outlook for more GBP losses towards 1.55 and possibly the 2013 low around 1.52," - Juan Manuel Herrera, Scotiabank.

The Canadian Dollar kept Pound Sterling pinned down near to a 10-year low in the penultimate session of the week, illustrating along the way what some analysts say is an increasingly bearish picture for GBP/CAD on the charts ahead of important jobs data due out from the UK and Canada.

Canada’s Dollar was a middle of the road performer among major currencies on Thursday but it continued to comfortably hold onto pole position in the rankings for the year to date and had little trouble keeping the Pound pinned down near to its lowest level since before the 2016 Brexit referendum.

The Pound to Canadian Dollar exchange rate had fallen to 1.5684 and its lowest since June 2013 during the Tuesday session and remained close to the round number of 1.57 on Thursday, although some analysts have suggested it could be at risk of deeper declines during the weeks ahead.

“Weekly price signals are bearish while short, medium and long-term trend momentum signals are also aligned bearishly against the GBP at this point. This will limit the GBP’s ability to recover (to near 1.58 at most) and support the outlook for more GBP losses towards 1.55 and possibly the 2013 low around 1.52,” says Juan Manuel Herrera, a strategist at Scotiabank. 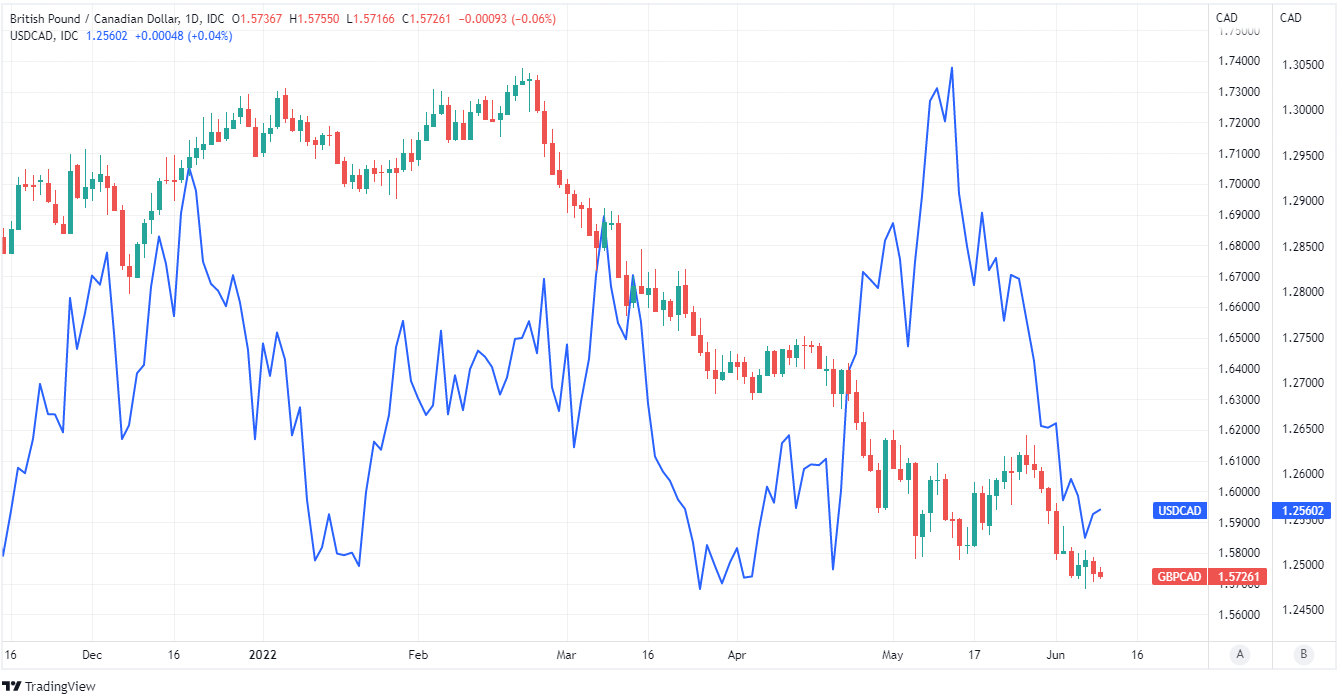 Above: GBP/CAD shown at daily intervals alongside USD/CAD. Click image for closer inspection.

Canada’s Dollar has strengthened against many major counterparts during the week to Thursday simply by better resisting the recovery seen in U.S. Dollar exchange rates that have corrected lower in the last month from some of its strongest levels since at least the onset of the pandemic.

“Yesterday’s narrower trade surplus chipped away a little more at Canada’s growth momentum moving into Q2 but the broader undertone for the economy remains relatively positive and the Bank of Canada’s focus is squarely on inflation,” says Shaun Osborne, chief FX strategist at Scotiabank. 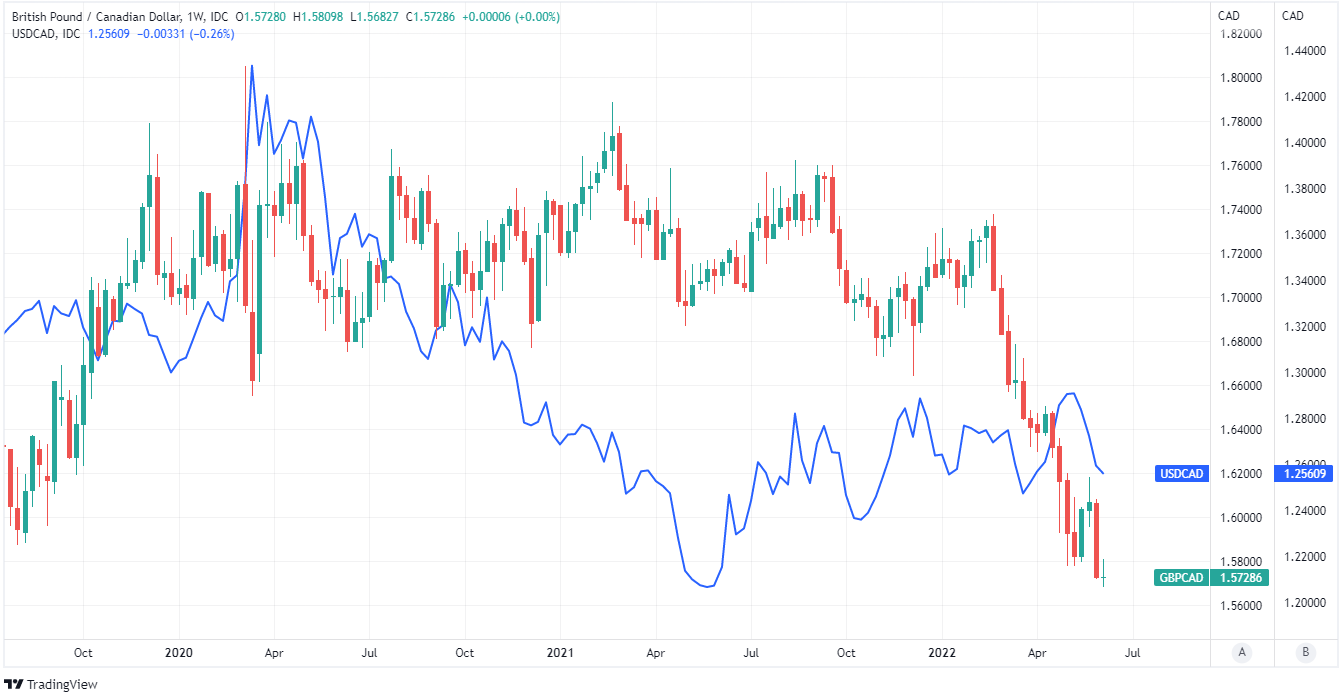 Above: GBP/CAD shown at weekly intervals alongside USD/CAD. Click image for closer inspection.

The Canadian Dollar has edged higher against the U.S. Dollar rose further against many other currencies including Sterling during the last week after the Bank of Canada lifted its cash rate from 1% to 1.5% and warned that it would act “more forcefully” if inflation or expectations for inflation rise sufficiently enough to make that necessary.

Meanwhile, Deputy Governor Paul Beudry suggested in a speech to the Gatineau Chamber of Commerce last Friday that containing inflation expectations could ultimately see the BoC lifting its cash rate by as much as 0.75% in a single meeting during the months ahead, although some strategists see this as something of a poisoned chalice for the Canadian Dollar and due in part to the deteriorating global economic outlook.

“The repricing in the direction of faster and larger rate hikes by both the BoC and the RBA in 2022 has taken place largely at the expense later rate hikes (see Figure 7 and Figure 8), with the inversion point in both implied rate curves inching slightly closer,” says Alvise Marino, a strategist at Credit Suisse.

“This front-loading of policy tightening expectations is in our view reflective of the increasingly loud drum beat of global recession fears and suggests that rate support for AUD and CAD might remain constrained unless markets see clear evidence pointing in the direction of a more benign global growth scenario,” Marino and colleagues wrote in a Wednesday research briefing.

The Pound to Canadian Dollar rate has fallen sharply in recent weeks but the Credit Suisse team suspects the Loonie would be stronger if financial markets were not growing concerned about the outlook for economic growth in Canada, the UK and elsewhere around the world. 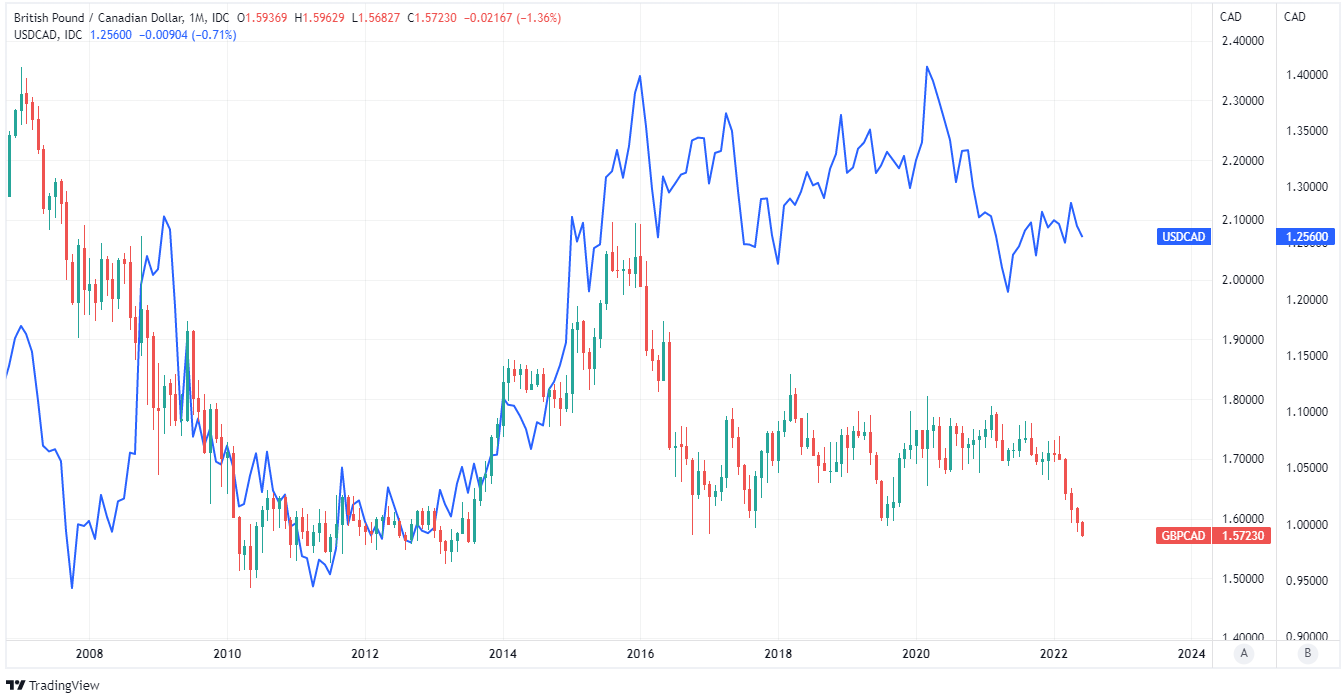 Above: GBP/CAD shown at monthly intervals alongside USD/CAD. Click image for closer inspection.

All of this helps to explain why Friday’s release of employment figures for the month of May is important for the Canadian Dollar outlook, and likewise with next Tuesday’s data from the UK and Pound Sterling, each of which could yet improve the prospects of the Pound to Canadian Dollar rate.

“Our economists have argued that Canada’s less tight labour market, compared to the US, reduces the need for BoC policy tightening vis-à-vis the Fed,” Marino said on Wednesday.

“While so far this argument has been drowned by concerns for rising inflation expectations, we suspect that it might suddenly become more prominent if the data were to show limited upside in hourly compensation (3.4%yoy in April) amid otherwise strong employment metrics,” he added.

Many will be looking on Friday to see if Canadian wage growth is rising with sufficient pace to merit central bankers’ fears of second round effects that could either lift inflation further down the line, or otherwise serve to entrench it at levels that are above the 2% target of the BoC.

The same is true of the UK’s latest employment figures, which are due out next Tuesday and just two days ahead of the June 16 Bank of England (BoE) interest rate decision, which could potentially be influenced by the data.