The Canadian Dollar climbed over and above all major currency counterparts barring the U.S. Dollar while clobbering Pound Sterling in the mid-week session after the Bank of Canada (BoC) announced a second large increase to its cash rate and said it could act “more forcefully” if needed.

The BoC warned on Wednesday that local inflation pressures are broadening with almost three quarters of items in the consumer price basket rising at rates of three percent or more, higher than the two percent target.

“The risk of elevated inflation becoming entrenched has risen. The Bank will use its monetary policy tools to return inflation to target and keep inflation expectations well anchored,” the BoC said in its statement, after warning that further increases in inflation are likely ahead.

“The pace of further increases in the policy rate will be guided by the Bank’s ongoing assessment of the economy and inflation, and the Governing Council is prepared to act more forcefully if needed,” the bank said in what was new guidance about the outlook for borrowing costs. 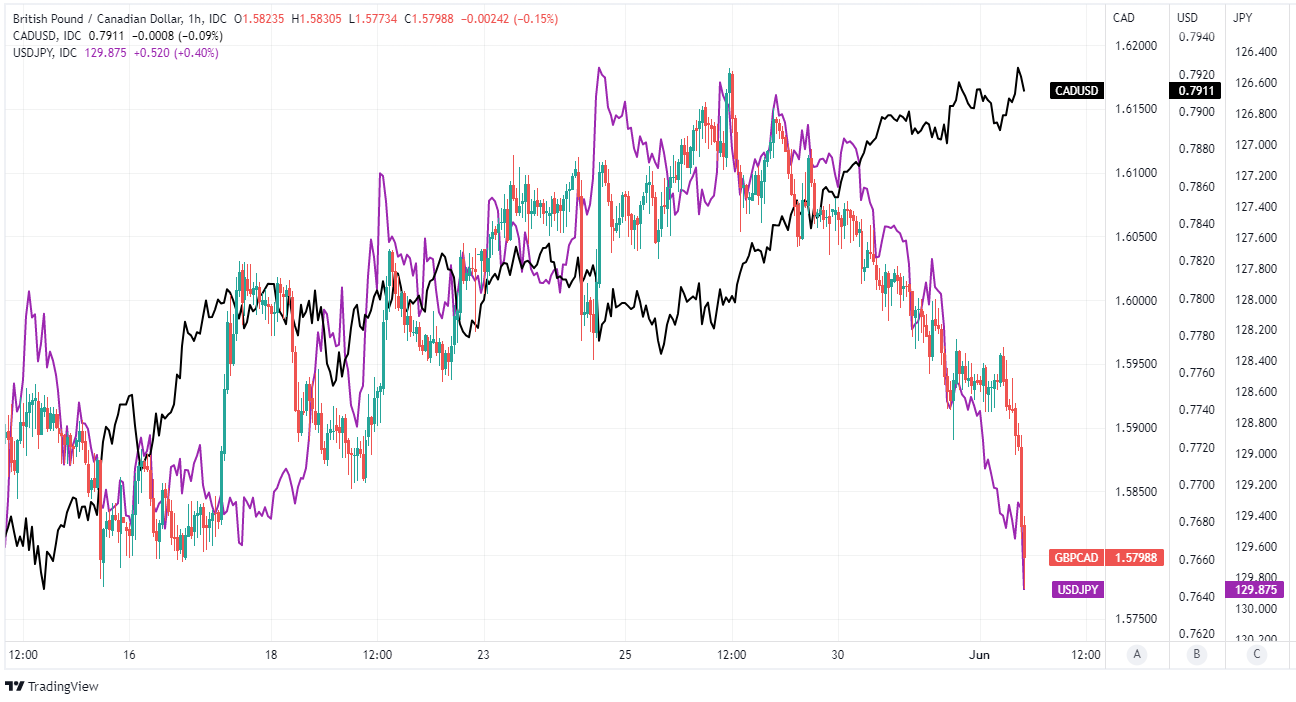 Above: Pound to Canadian Dollar rate shown at hourly intervals alongside CAD/USD and upside down or inverted USD/JPY. Click image for closer inspection.

The statement shows the BoC’s monetary policy stance is, if anything, becoming more ‘hawkish’ and not less.

This potentially explains how the Loonie was able to resist a fresh and further onslaught from the U.S. Dollar while riding roughshod over Sterling.

“The hawkish policy statement has helped CAD on the crosses but has done little to impact USDCAD. The ISM beat is pushing rates higher, weighing on risk sentiment,” says Mark McCormick, global head of FX strategy at TD Securities.

“We're cautious on chasing the move lower in USDCAD, given [high-frequency-fair-value] sits near 1.28 and CAD sits as one of the most overbought pairs on our dashboard. As a result, we think the knee-jerk spike here will offer nice levels to fade CAD, where we remain short versus NOK. We also like scaling into CAD shorts versus AUD and NZD, where it looks pretty rich,” he added. 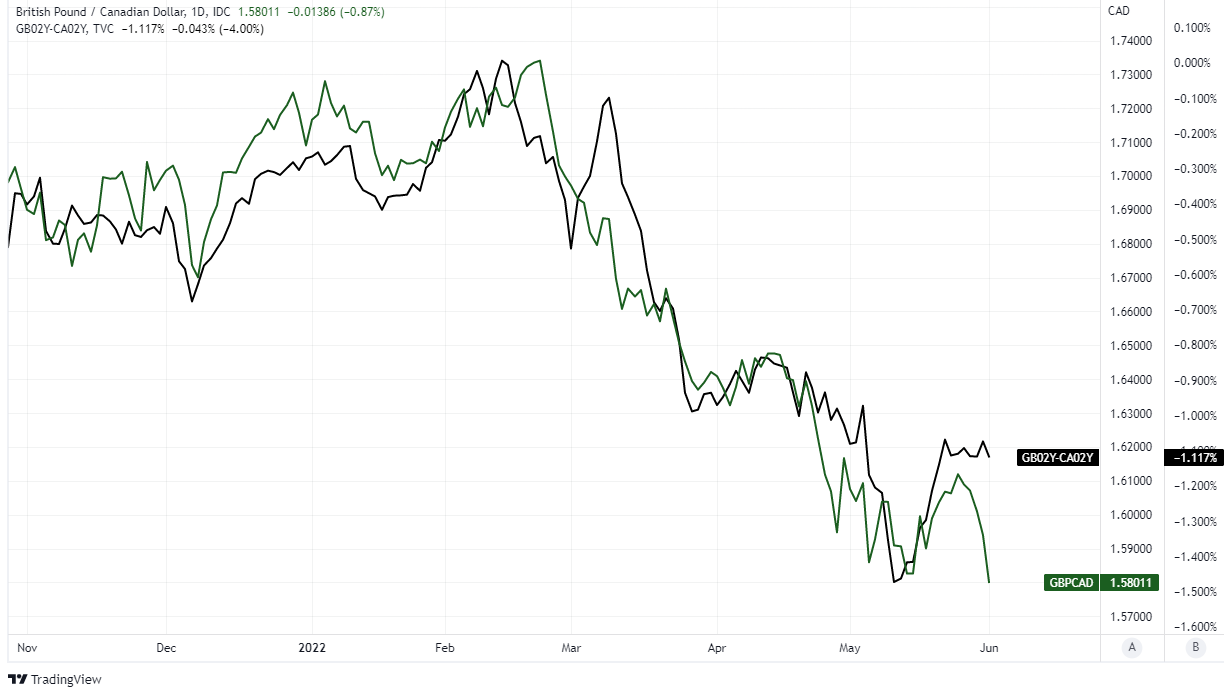 GBP/CAD losses extended to new 2022 lows as the Loonie held a gain of more than one percent gain over the U.S. Dollar for the week to Wednesday.

The decision came with various measures of inflation in Canada ranging from between 3.2% and 6.8% and marks an almost complete withdrawal of the large interest rate cuts that were announced by the BoC during the earliest days of the coronavirus crisis when the cash rate was chopped from 1.75%.

“Our call for another 50 basis point hike in July would fit the definition for the forceful measures it has talked about. There was, however, a threat to act “more forcefully if needed”, and no counterbalancing hint of a potential need to slow the pace,” says Avery Shenfeld, chief economist at CIBC Capital Markets.

“That runs counter to our forecast that we’ll see signs of a growth deceleration by early fall, allowing the BoC to slow to a 25 bp hike in September, and then a pause before a final quarter point to 2.5% in early 2023,” Shenfeld added. 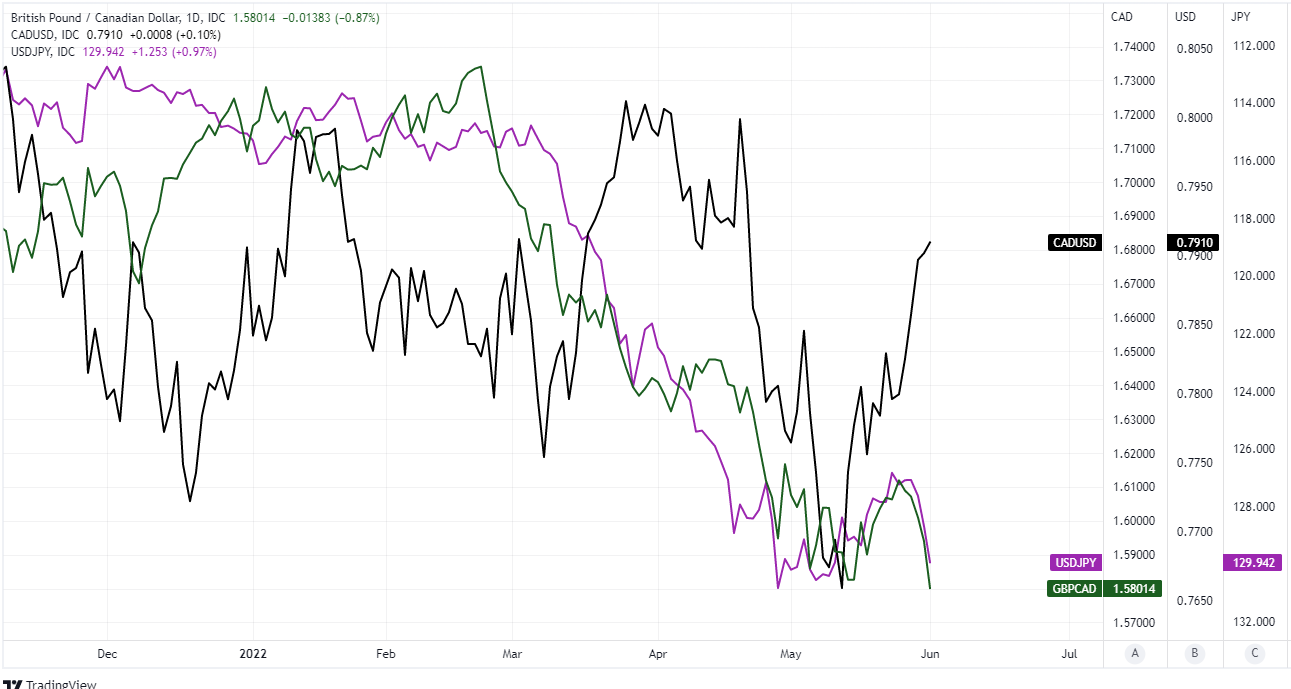 Above: GBP/CAD alongside CAD/USD and upside down or inverted USD/JPY. Click image for closer inspection.