The Pound to Canadian Dollar exchange rate has shown signs of stabilising but its scope for recovery is being limited by resilient Loonie and the market’s increasingly hawkish expectations for the Bank of Canada, expectations that could potentially build further in the week ahead.

Sterling found support just above the 1.6700 level against the Loonie following last Wednesday’s losses but was unable to get back to 1.69 ahead of the weekend, and had twice previously been unable to overcome the level during the opening stages of the week.

This has left the Pound-to-Canadian Dollar rate trading in a 200 point consolidation range following its steady decline from 1.76 in early September, which could continue to define price action over the coming days.

That’s unless either Sterling or the Loonie can find cause for a breakout in the raft of key economic figures due from both Canada and the UK this week, which includes October’s readings for inflation and retail sales on the Canadian Dollar side.

“The inflation data will be scarier than October’s Halloween costumes, but markets should be braced for that after looking at the US report for the same month,” warns Avery Shenfeld, chief economist at CIBC Capital Markets.

With external factors like the trajectory of commodity prices and the U.S. Dollar aside, Wednesday’s inflation data is the main source of upside potential for the Loonie and downside risk for the Pound-to-Canadian Dollar rate. 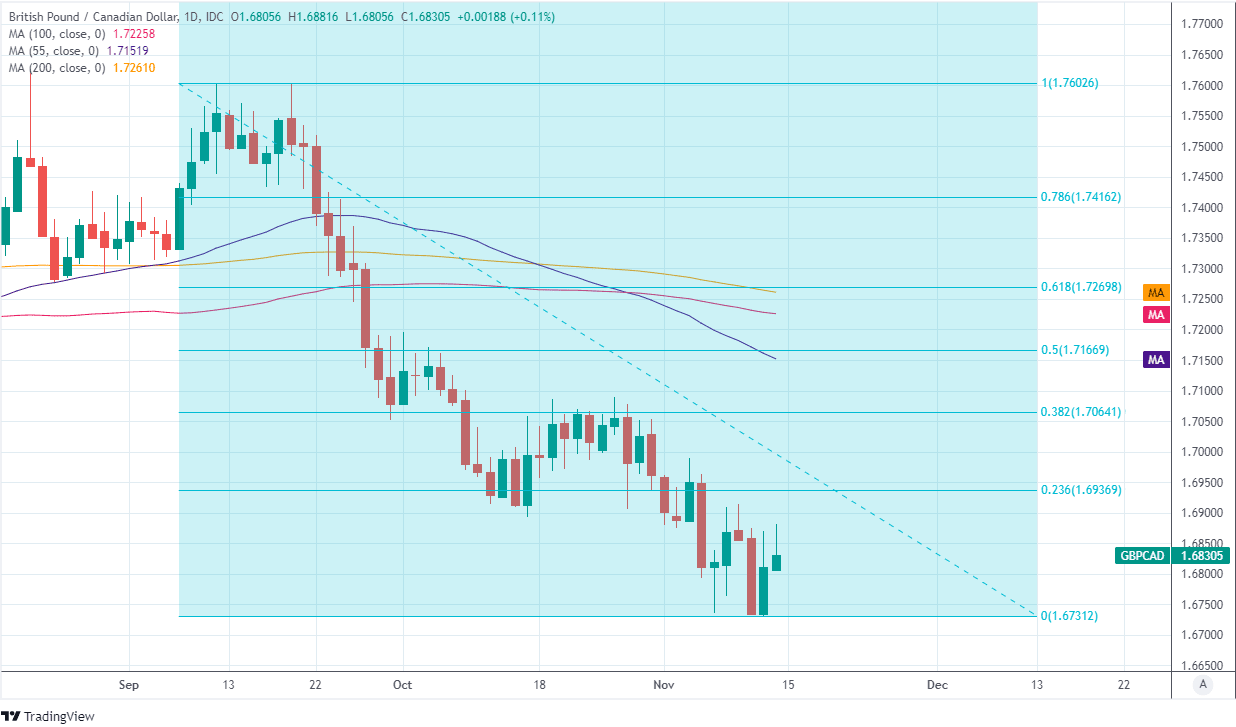 CIBC’s Shenfeld and colleagues looks for October’s inflation to come in at an annualised 4.7%, up from 4.4% previously, which could potentially boost the Loonie if it leads the market to remain confident in wagers that the Bank of Canada could be likely to lift its interest rate from its latest crisis-inspired low of 0.25% as soon as April 2022.

Should the data or any other factor pull the main Canadian exchange rate USD/CAD lower from its opening level of 1.2548 over the coming days as some analysts suggest may be likely, then the closely connected Pound-to-Canadian Dollar rate would also likely come under pressure too.

Before then however, Sterling will have to navigate a volley of key economic figures as well as the appearance before parliament’s Treasury Select Committee of Bank of England Governor Andrew Bailey and colleagues from the Monetary Policy Report, who’re due to give evidence at 14:00 on Monday about the BoE’s latest outlook for monetary policy and related topics like inflation and the economy.

“While the BoE will carefully consider today’s growth data ahead of its 16 December meeting, we think employment prints next week (16 November) and next month (14 December) will be more important. Our working assumption is that these prints point to a minimal impact on unemployment following the conclusion of the furlough scheme at the end of September,” says Christopher Graham, a UK economist at Standard Chartered.

“We still think the BoE will be ready to hike the base rate by 15bps at the December meeting, but we stress that it will be a very close call,” Graham wrote in a research note last Friday. 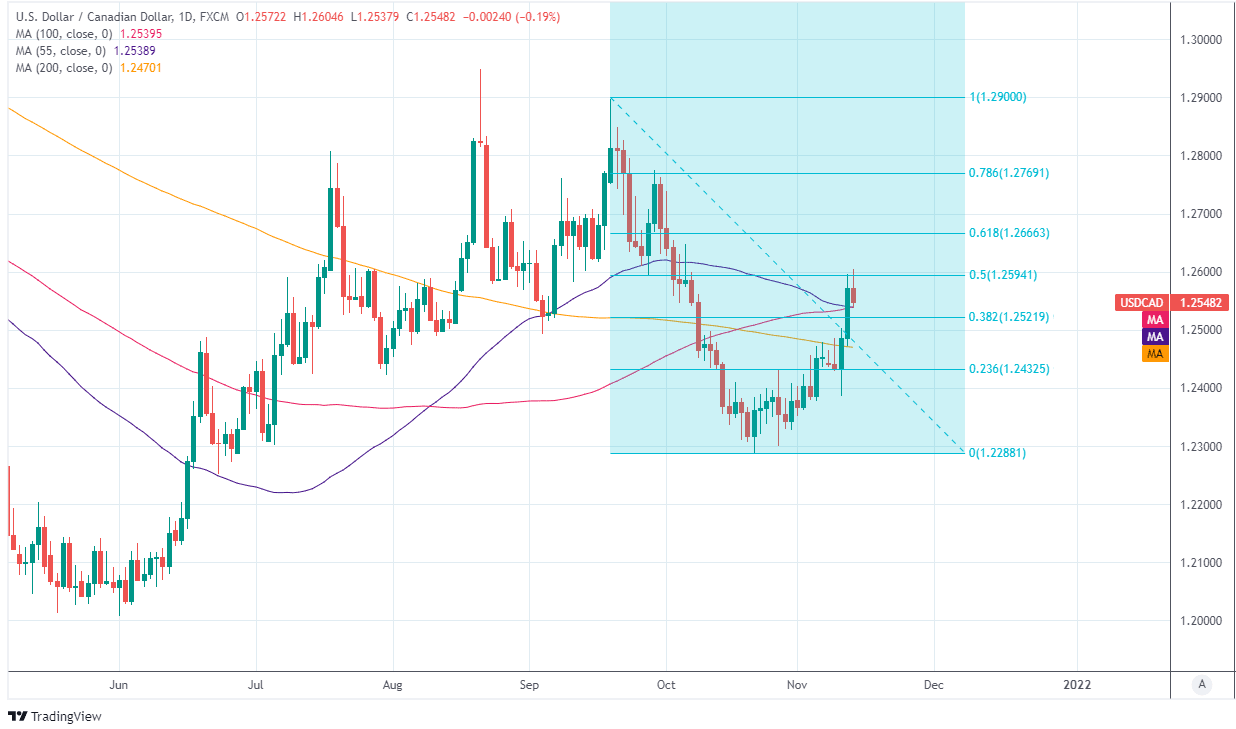 Monday’s hearing could potentially provide the market with insight into whether it’s likely to be December, February or after that the BoE begins to reverse its coronavirus-inspired cuts to interest rates, which could potentially be a supportive development for Sterling and GBP/CAD.

But the hearing is followed on Tuesday by the latest round of unemployment statistics, which are by far the most important of likely influences on when the BoE might be willing to lift interest rates given the Bank has made clarity about the impact that September’s end of HM Treasury’s furlough scheme had on employment a prerequisite for lifting Bank Rate.

Both events are followed on Friday by retail sales statistics from both the UK and Canada, although an equally important factor for the Pound-to-Canadian Dollar rate once beyond mid-week will be the trajectory of the overall U.S. Dollar following last week’s surge of inflation for October and extended rally in U.S. exchange rates.

The Pound to Canadian Dollar exchange rate tends to closely reflect an amalgamation of GBP/USD and USD/CAD, while it can often appear to follow the latter U.S. Dollar exchange rate so Sterling would likely be sensitive to whether or not USD/CAD continues higher or reverses lower this week.

“Spot is progressing through resistance defined by the recent lows (1.6895) which adds a little more credence to the notion of a short-term (at least) rebound. Daily and weekly trend oscillators are, however, resolutely bearish for the pound, which rather suggests the rebound may struggle to gain significant traction. Resistance is 1.7085,” warns Juan Manuel Herrera, a strategist at Scotiabank, in a recent research note. 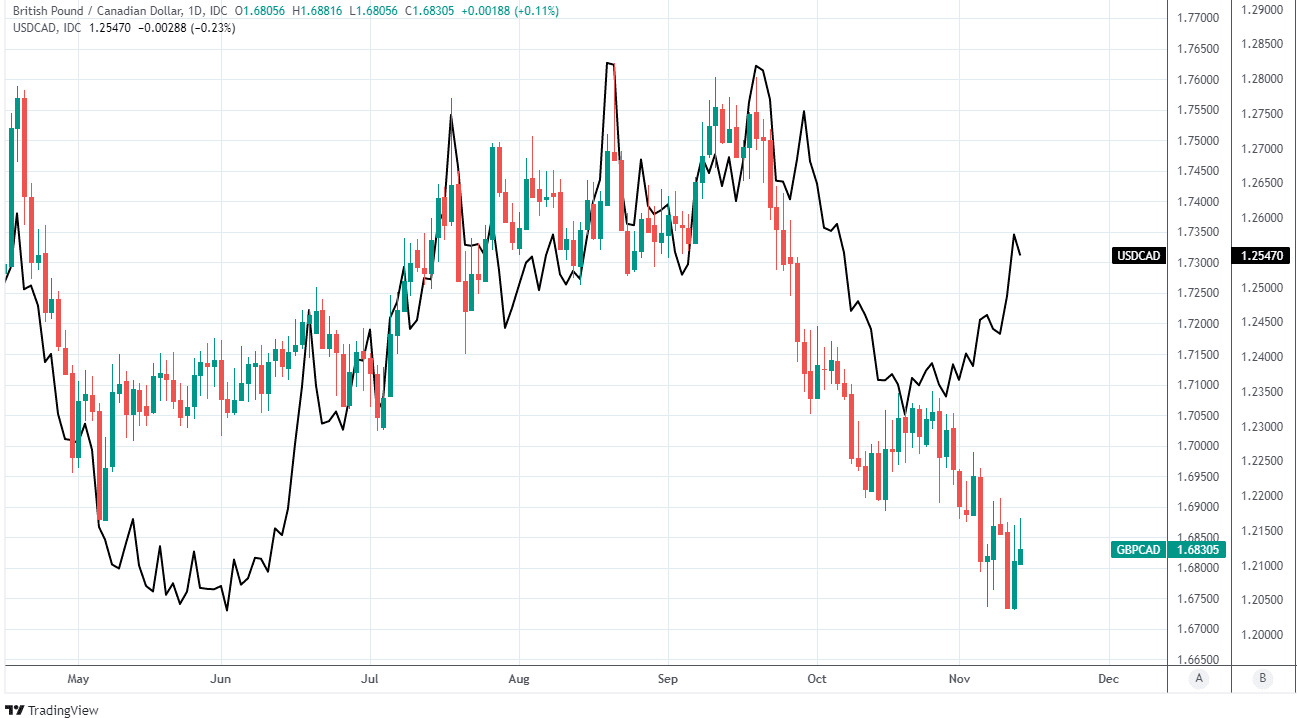 Above: Above: Pound-to-Canadian Dollar exchange rate shown at daily intervals alongside USD/CAD.