The Canadian Dollar plumbed the bottom of the major currency barrel ahead of the weekend and was on course for its worst week since March 2020 as a gloomy market of risk-averse traders overlooked signs of a robust pending recovery for Canada's economy.

Statistics Canada data showed Canadian retail sales rose by 4.2% at the end of the second quarter this Friday, slightly less than the 4.4% anticipated by consensus among economists, although core retail sales increased by 4.7% and somewhat ahead of the 4.5% anticipated by the market.

The core measure of retailers’ income ignores sales of large ticket items like cars and gasoline, with its volatile prices, for the distorting impact they have on underlying trends and often tends to garner more attention from the market.

“Even with that slight retreat, retail sales were still well above their pre-Covid level in July. Moreover, the greatest gains were likely seen in many retail services,” says Royce Mendes, an economist at CIBC Capital Markets.

“The general rebound following lockdowns shows the willingness of Canadians to spend and, more broadly, how quickly the economy can bounce back when Covid cases are low,” Mendes 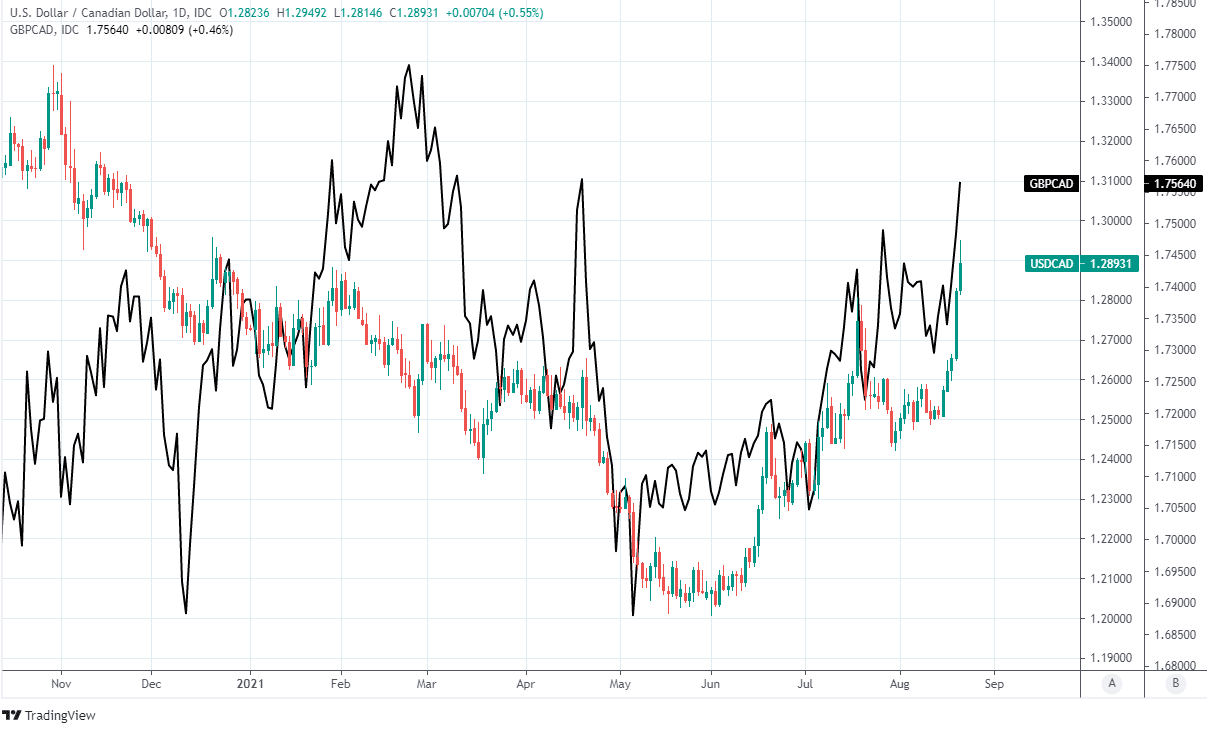 Above: USD/CAD shown at hourly intervals with GBP/CAD.

Canada’s Dollar edged lower following the data, continuing its Friday underperformance and leaving it close to the bottom of the major currency league table for the week overall.

Commodity currencies like the Loonie, Australian and New Zealand Dollars have been the most eminent casualties of the U.S. Dollar rally seen this week, although it was the Norwegian Krone that has claimed the bottom spot within the G10 contingent.

“Why is this happening? Put simply, expectations for the recovery in global demand are moderating. This may be a function of the rise in Delta variant cases and associated lockdowns/restrictions, but the fact is that sentiment in global services has stalled over the past few months,” says Bipan Rai, CIBC’s North American head of FX strategy. “For USD/CAD, we’re settling into a new range (1.26-1.30) in the coming weeks.”

Canada’s Dollar reached its lowest level against the U.S. dollar since December last year this week in price action that lifted the Pound-to-Canadian Dollar rate by 1.5% to 1.7625 on Friday and its highest level since the opening quarter of the year.

Concerns about the global economic outlook have been prevalent in analyst commentary this week given earlier signs that key sectors of European economies are softening, Asia Pacific economies remain besieged by the coronavirus and measures used to contain it, while others which had previously kept out the disease such as Australia and New Zealand are increasingly succumbing to it.

Meanwhile, the newest incarnation of the virus is spreading with increasing rapidity across the globe and the Federal Reserve (Fed) has signalled clearly that U.S. economic conditions are close to being sufficient for necessitating a tapering of its quantitative easing programme, which has also lifted the U.S. Dollar and put pressure on other currencies including the oil-sensitive Canadian Dollar.

The Pound-to-Canadian Dollar rate tends to benefit when the USD/CAD rate is rising and the latter was on course Friday to post its largest one-week increase since March 2020, the point when it first dawned on financial markets that much of the global economy would ultimately grind to a standstill as a result of the coronavirus, although some analysts view the exchange rate as being close to levels that could elicit a stabilising bid from the market.

This could be pertinent insight because for the time being at least, it remains the case that the Canadian, UK, U.S. and European economies are on course for recovery, even if momentum has ebbed slightly in recent months.

“The Canadian dollar is finally playing some catch-up with the weakness in commodity currencies elsewhere since yesterday as it has received a real jolt on the latest slide in crude oil prices and on the FOMC minutes encouraging the USD higher,” says John Hardy, head of FX strategy at Saxo Bank.

“The next critical level is the 1.3000 area, an important level on the way down not only post pandemic outbreak, but also prior to that period in 2019. We’re probably working into solid value territory above that level for pondering CAD longs again,” Hardy writes in a Friday note. 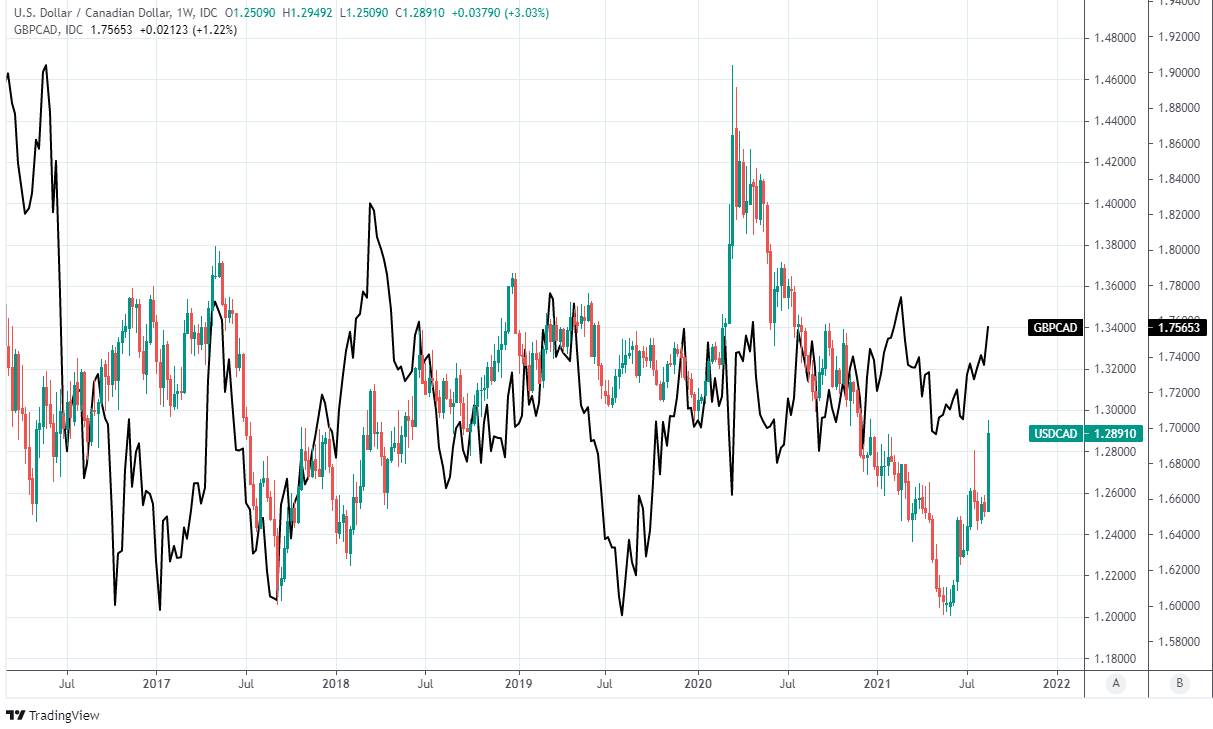 Above: USD/CAD shown at weekly intervals with GBP/CAD.