- GBP/CAD could struggle for traction as UK data risk looms
- Supported at 1.7350 but momentum may ebb near to 1.75
- Economy eyed after BoE’s stance, USD trend aids GBP/CAD
- CAD seen beating retreat from USD in quiet week for CA

The Pound-to-Canadian Dollar rate entered the new week above 1.74 and with support at nearby levels but Sterling could struggle for momentum before Thursday’s GDP report reveals the extent to which the UK’s recovery met bullish market expectations last quarter.

The Pound-to-Canadian Dollar rate has been lifted above 1.74 amid a further advance in U.S. exchange rates that has elevated USD/CAD and weighed on the Loonie more than Sterling, which has also been supported by the Bank of England's (BoE) formal acknowledgement that a “modest tightening” of monetary policy is likely to be necessary in order to bring inflation back to its 2% target over the coming years.

But GBP/CAD has thus far been unable to get past 1.75 and the BoE's outlook for Bank Rate to reach 0.5% in late 2023 is hinged in no small part on the expectation of a strong performance from the economy, which is an assumption that will be put to its first test Thursday by second quarter GDP data.

The data is out at 07:00 and could potentially stifle the upturn in the Pound-to-Canadian Dollar rate unless it meets heightened economist expectations, which envisage an expansion of 4.8% that would be a touch below the BoE’s forecast of 5%.

“We expect growth in Q2 to have been driven largely by consumption (forecast: 4.8% q/q) given the reopenings and making up for weakness in Q1,” says Fabrice Montagne, an economist at Barclays.

“Market rate expectations steepened somewhat in the wake of the BoE communication with a first 15bp hike now priced in by mid next year as opposed to early 2023 previously, but thereafter, expectations hardly changed with the next hike still not expected before 2024,” Montagne says. 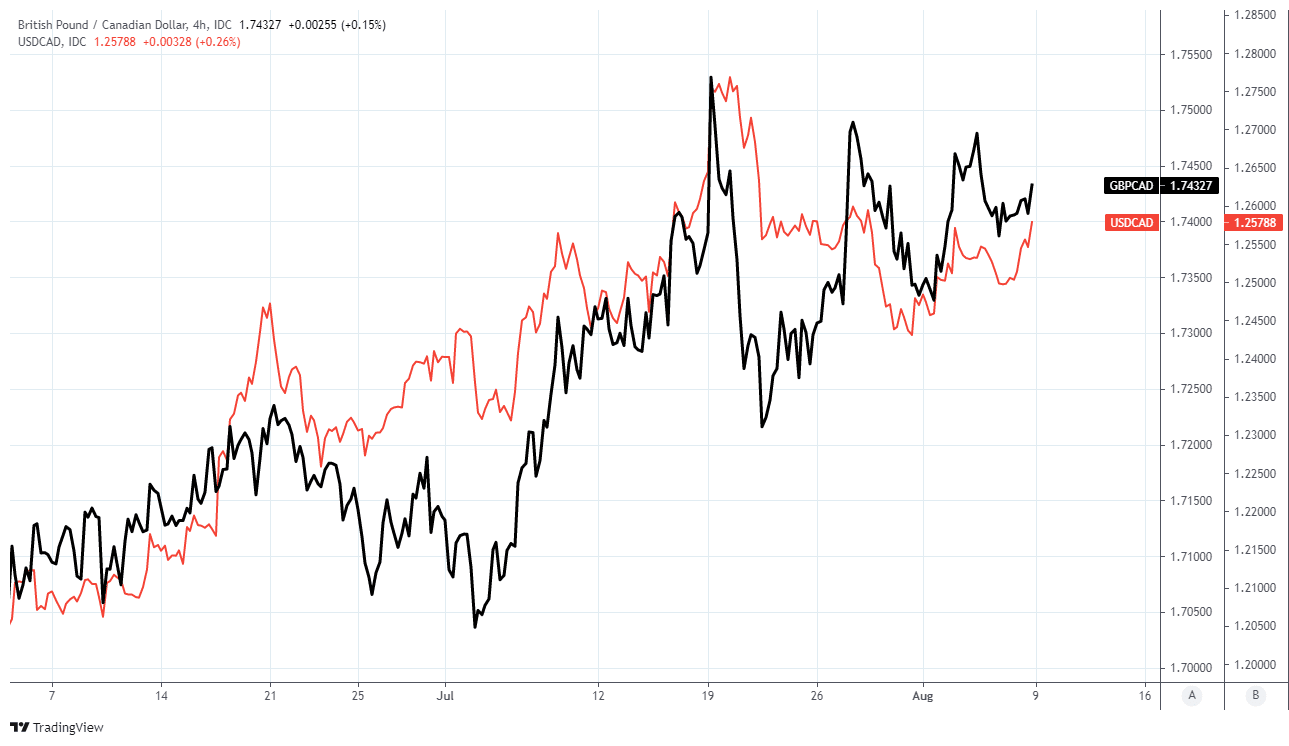 Above: Pound-to-Canadian Dollar rate shown at 4-hour intervals alongside USD/CAD.

The consensus implies that the UK was the fast growing economy in the developed world last quarter but the BoE’s more ambitious forecast potentially sets a higher bar for Sterling to benefit from Thursday’s data.

“Markets are likely to remain extremely data dependent. This is because it will be the key driver for how quickly the OIS curve can price policy rates to reach 50bp,” says Ned Rumpeltin, European head of FX strategy at TD Securities.

“Solid support remains in place around 1.3875, with the 1.3835/1.3845 zone as the next attractor to the downside,” Rumpeltin says, referring to the main Sterling exchange rate GBP/USD.

Any Thursday disappointment that eats away at the market-perceived probability of a BoE rate rise next year could weigh on GBP/CAD and potentially pull it back below 1.74, although losses would likely be limited however, if the greenback remains on its front foot and keeps USD/CAD pointed higher.

There’s reason for why it could too after Canada’s Dollar was undermined by last Friday’s July employment report that saw the overall number of jobs created underperforming economist expectations, though it didn’t help that the data came alongside details of another blockbuster U.S. payrolls report.

“Full time positions (+83k) made up the bulk of overall job gains and wages advanced 0.6% M/M. These were quality jobs, even if the quantity fell a bit short of expectations” says Shaun Osborne, chief FX strategist at Scotiabank. “The broader reopening of the Canadian economy should give a bit more lift to the tone of data reports moving forward and these jobs data alone will not deflect the BoC from its current tapering trajectory.”

The U.S. economy created close to one million jobs in July for a second consecutive month in a labour market outcome that has been seen by analysts as all-but sealing a deal for a September announcement by the Federal Reserve (Fed) of plans for a tapering of its quantitative easing programme.

That has lifted the U.S. Dollar generally as well as the USD/CAD exchange rate, which the Pound-to-Canadian Dollar rate tends to have a positive correlation with, and could remain supportive of GBP/CAD during the week ahead.

The Pound-to-Canadian Dollar rate would trade as high as 1.7461 this week if losses by the main Sterling pair GBP/USD are limited to the 1.3835 level referenced by TD Securities’ Rumpeltin and if, at the same time, USD/CAD finds its way back up to the 1.2620 are eyed by Scotiabank’s Osborne.

“The problem for the CAD over the week ahead is that, with the domestic calendar bereft of any data releases, markets are more likely to focus on the solid US jobs report and how that reinforces the Fed taper narrative. We expect the USD to remain broadly better supported in the coming week, putting a little more focus on the topside of our estimated 1.2440/1.2620 range,” Osborne says in a Friday note. 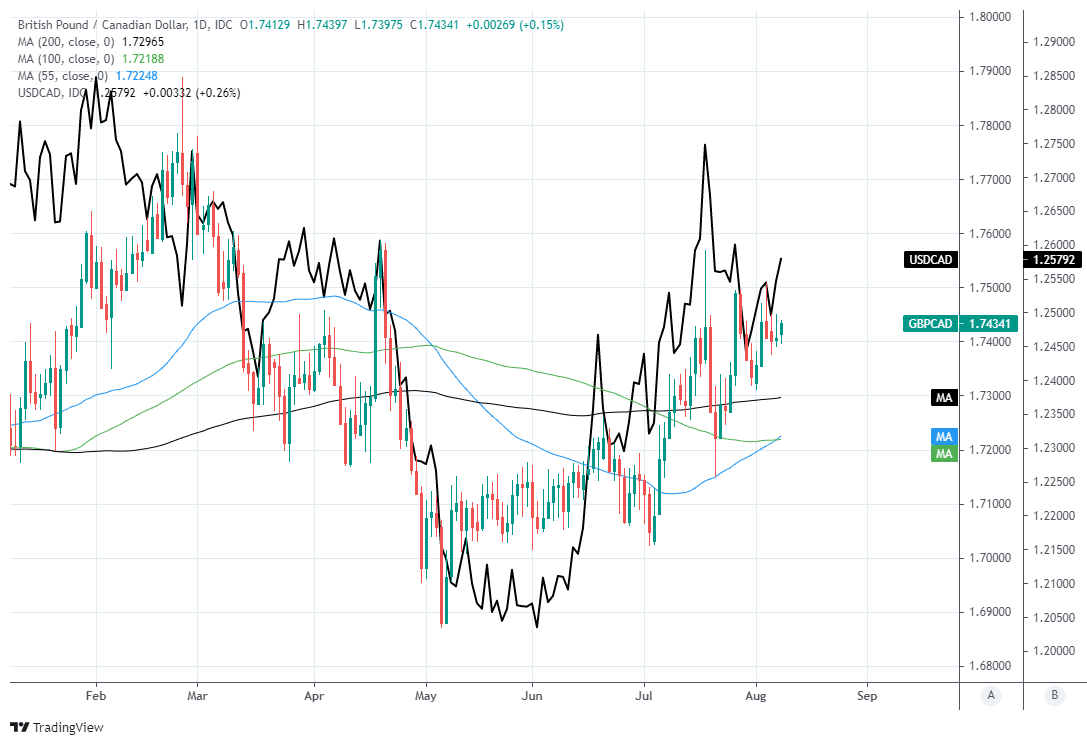