The Pound was biding time near to 2021 lows against the Canadian Dollar on Wednesday ahead of the latest Bank of England policy decision although last week’s losses have seen the technical backdrop turn tentatively bearish on the charts, according to Scotiabank, posing a risk to the outlook for Sterling.

Pound Sterling lagged commodity and emerging market currencies in the mid-week session, which saw the Pound-to-Canadian Dollar exchange rate (GBP/CAD) slip by a fraction to 1.7080 on an intraday basis while taking its one-week decline to -0.5% and its 2021 loss to -1.79%.

Canadian and U.S. Dollars were meanwhile the outperformers over a one-week look back thanks in part to the lingering upside impetus of American bond yields and upbeat growth prospects, both of which played a role in sinking GBP/CAD over the last week.

GBP/CAD has fallen through an earlier range floor around 1.72 in the last week to trade as low as 1.6950 ahead of the holiday weekend in losses that some technical analysts see as having tipped a previously neutral technical picture in favour of further declines for Sterling.

“Trend signals are shifting towards signalling a broader, bearish tone for the cross. All things considered, the scope for GBP gains from here looks limited (high 1.71s) and we think the broader CAD strength tends to support the idea of a retest of the late 2020 GBP low at 1.6775,” says Juan Manuel Herrera, a strategist at Scotiabank.

GBP/CAD losses have been driven by more than last week’s fire sale of European and other risk currencies as the Canadian Dollar has itself climbed to its strongest level against the U.S. Dollar for more than three years and has shown few if any signs of tiring in its ascent. 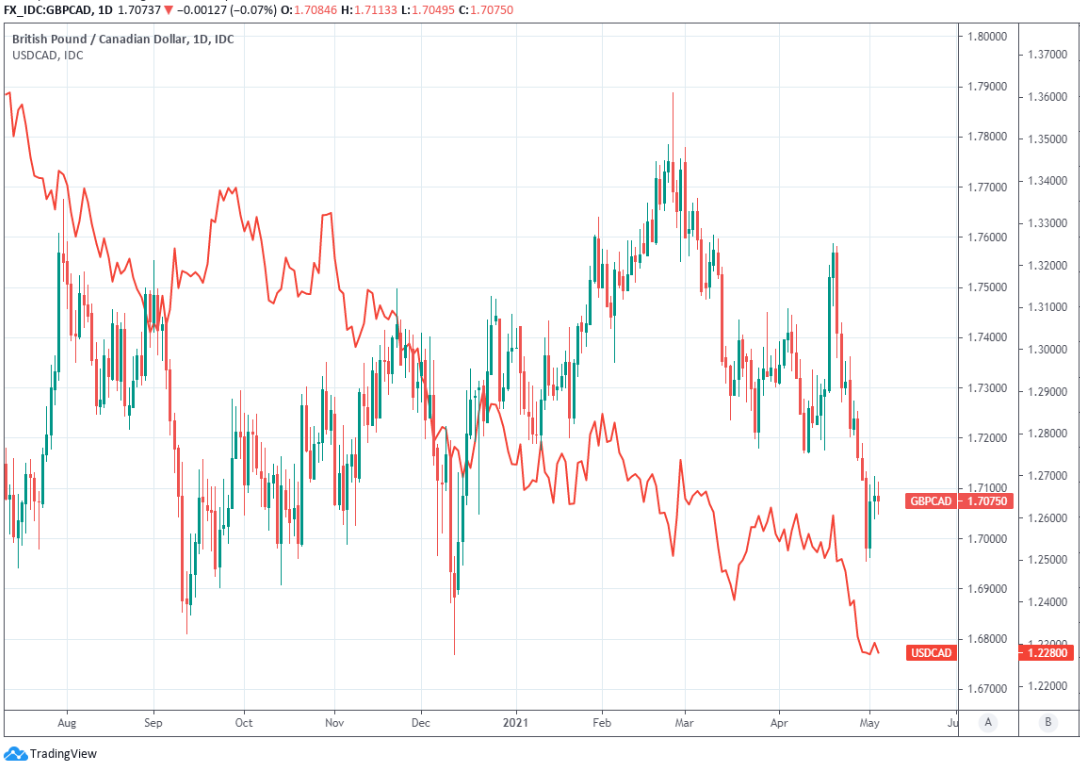 USD/CAD is an inverted version of Canada’s main exchange rate and so, alongside its UK counterpart GBP/USD, is one of two mechanical components that has substantial influence on GBP/CAD.

"We spot strong resistance in the mid/upper 1.23s but the scope for USD strength is perhaps even more restricted than that - to the low/mid 1.23s. Support is 1.2250, the early 2018 low, but the real objective for this move remains 1.2065, the 2017 low point. Look to fade minor USD rallies," Herrera says of the outlook for USD/CAD.

Scotiabank’s bearish outlook for USD/CAD is suggestive of ongoing headwinds that leave the Pound at risk of further losses unless the main Sterling exchange rate GBP/USD is able to accelerate sharply in the interim.

There’s reason for thinking it might because markets are anticipating that the Bank of England (BoE) will be one of the slower central banks to lift interest rates over the coming years, with pricing in the overnight index swap market placing it only marginally ahead of the European Central Bank (ECB), which may be a perilous assumption for investors to be making ahead of Thursday’s policy update.

GBP/USD and GBP/CAD could gain a new lease of life if either economic forecasts, guidance for interest rates or actions in relation to its crisis-inspired quantitative easing programme lead investors to second guess their assumptions about the BoE’s policy outlook this Thursday.

”If the BoE pushes back against current rate market pricing, by reflecting below-target inflation under the market rates profile, this could also spur some adjustment in front-end GBP rates,” says Parisha Saimbi, a G10 FX strategist at BNP Paribas, who says Sterling would be “vulnerable” under the aforementioned scenario.

There are doubts in many parts of the market about whether anything the BoE says or does on Thursday could really do much to lift Sterling beyond current levels, due in part to its already-strong performance against many currencies this year and the BoE’s earlier recognition of the UK’s improving economic outlook.

However, the bank’s new forecasts for GDP growth and inflation could yet crystalise upside risks to Sterling and GBP/CAD, especially if the inflation projections show the consumer price index rising above the 2% target within or even at the tail-end of the forecast horizon. 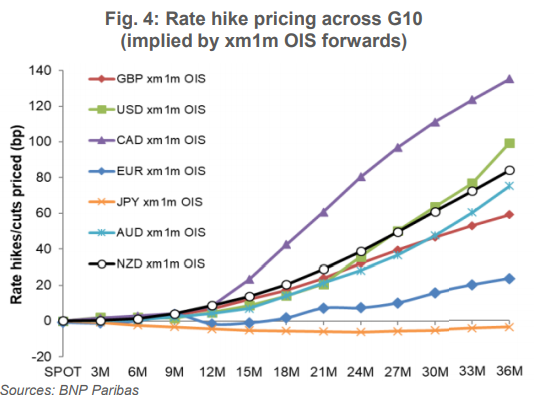 Higher inflation forecasts would clearly indicate that lurking on the path ahead is at least a risk of the BoE surprising sceptical financial markets by raising Bank Rate earlier than has recently been anticipated, which could be a non-negligible risk this week and not least because of the UK’s seemingly enhanced susceptibility to inflation.

The UK economy is a contender to lead the major developed world economies in recovery this year while BoE itself noted when lifting Bank Rate to 0.50% back in November 2017 that “Brexit-related constraints on investment and labour supply” had reduced the pace “at which the economy can grow without generating inflationary pressures.”

“With a lot of positive news already in the price, we think risks to the GBP are skewed to the downside going into this meeting. We would view any GBP weakness in response to the event as an opportunity to buy GBP, as we remain bullish over the medium-term,” Saimbi says.

Any ‘hawkish’ inflation forecasts, when combined with market expectations for Bank Rate to remain unchanged in the coming years and for this week’s announcement to pass without event, could put wind back in the sails of the Pound and GBP/CAD on Thursday and into the weekend.

This is a risk to the bearish picture emerging on the GBP/CAD rate charts.

In terms of the BoE’s main policy instruments, economists and analysts are unanimous in expecting Bank Rate to be left unchanged at 0.10%, although there is divergence between them on what the bank might say or do in relation to its quantitative easing programme.

The latter could be of limited consequence for Sterling however, seeing as when BoE allocated an additional £150bn of newly created bank reserves to its quantitative easing programme back in November it announced at the same time that this new envelope would be drawn down in full between January 2021 and year-end.

It’s not clear that Sterling would necessarily benefit from the bank making a more formal light of that.