Month-end and quarter-end flows will be in focus today and will be offered up by foreign exchange analysts and commentators as a default explanation for any notable and unexpected exchange rate moves.

The mechanics behind such moves are however not clear and predicting which currencies will move is difficult, but researchers at RBC Capital Markets have identified the Canadian Dollar and British Pound as being two currencies that can tend to display dependable month-end patterns in certain situations.

RBC Capital research shows that the USD/CAD exchange rate is particularly prone to month-end flows, and predicting the moves depends largely on the performance of U.S. stock markets during the month past. 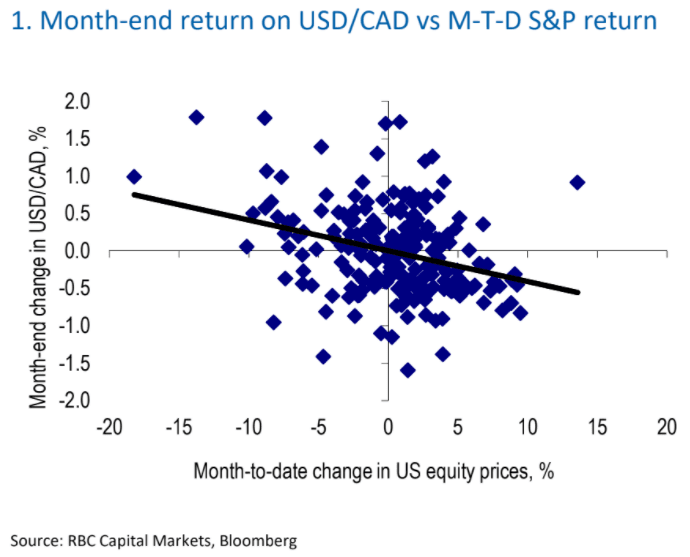 Cole explains that the horizontal axis in the above shows the month‐to‐date change in U.S. equity prices for the penultimate day of every month for the last decade.

The vertical axis shows the change in USD/CAD for the final day of the same month.

"There is a clear tendency for USD/CAD to fall on the last day of months where equity returns are positive and vice versa, particularly so when the change in equity prices is large. The rationale for this is that rising prices raise the value of foreign investors’ US equity holdings leaving a requirement to sell USD forward for the proportion of portfolios that is hedged," says Cole.

RBC Capital do however find no evidence that this relationship holds in reverse, i.e. there is no systematic link between relative equity price movements and end‐month FX returns.

"It seems that either equity managers in the U.S. leave their foreign holdings largely unhedged or foreign holdings simply aren’t big enough to matter, unlike overseas managers whose portfolios are likely to be highly weighted in US stocks. So, the effect of month‐end hedging is restricted to USD, is unidirectional and only US equity returns matter," says Cole.

It is noted too that not all G10 currencies show such consistent bias as is clear for the Canadian Dollar.

But, the British Pound is another candidate for month-end flow movements.

RBC Capital research shows a consistently profitable trading results for GBP/USD – "perhaps not surprising given the large stock of pension assets in particular in the UK, and likely biases toward both equity investing and U.S. holdings," says Cole.

Researchers have created a "ladder" of month-end trades: