The Canadian Dollar recoiled in the face of a resurgent U.S. Dollar and Pound on Thursday but could face a reckoning with the Bank of Canada (BoC) and fresh losses later in January if USD/CAD is unable to sustain its newfound upward trajectory, according to some analysts.

Canada's main exchange rate USD/CAD was nearly half a percent higher and above 1.27 again on Thursday, with U.S. Dollar strength also pulling GBP/CAD higher with it as earlier underperformers turned into outperformers on the currency market and vice versa.

With the greenback and Sterling the exceptions, Canada's Dollar advanced on all major currencies for the session, with price action coming after the Republican Party lost control of the U.S. Senate in Georgia state's runoff election this week and as investors reappraised the outlook for the U.S. and global economies.

"The market is very short of USDs and long EURs. It would appear likely that the news flow regarding the likelihood of US fiscal expansion, growth and interest rates has brought sufficient uncertainty to trigger some profit-taking," says Jane Foley, a senior FX strategist at Rabobank.

There's uncertainty about whether the U.S. Dollar rebound can be sustained, although if it can't then the risk of an interest rate cut at the Bank of Canada could grow later in January, especially if USD/CAD falls below a nearby but nonetheless important level of support on the charts. 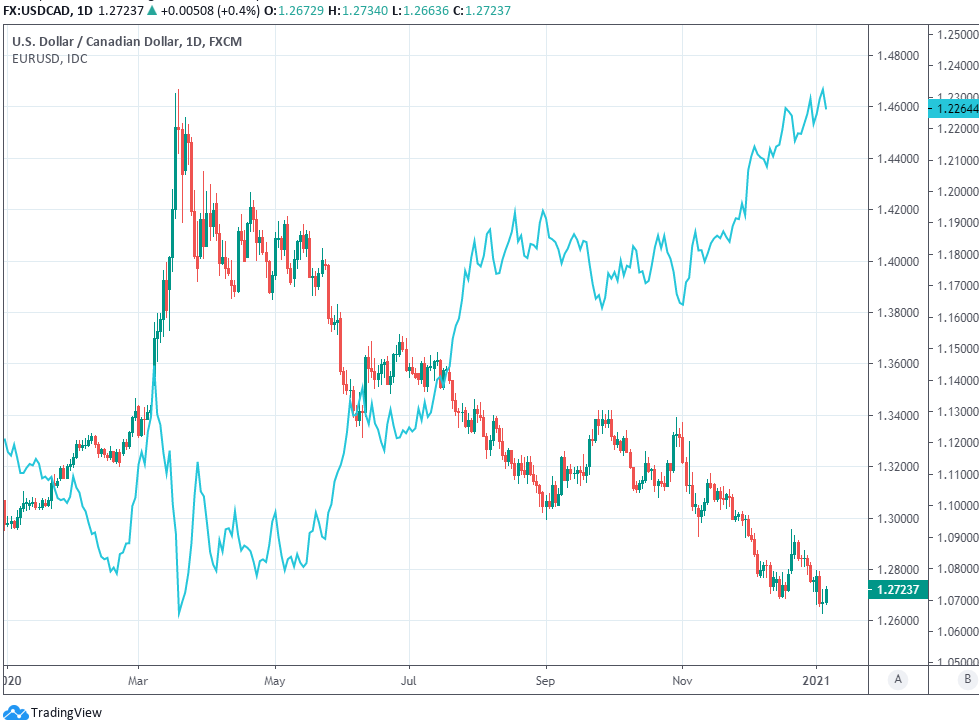 Above: USD/CAD shown at daily intervals with EUR/USD (blue).

USD/CAD had slipped beneath 1.27 in the prior session as the U.S. Dollar weakened and the Loonie rose by default, although it wasn't able to achieve a daily New York close beneath 1.2677, which coincides with the 76.4% retracement of USD/CAD's 2017-2020 advance.

This has been flagged as the last technical impediment to a further USD/CAD decline all the way to 1.2528, which would be its lowest since early 2018 but also a potential trigger for a surprise BoC decision to cut Canada's cash rate from 0.25% to 0.10% on January 20.

Governor Tiff Macklem made the BoC's disapproval of a stronger Loonie plain for all to hear on December 15, when he said in an address to the Vancouver Board of Trade that resilience in exchange rates has prevented the export sector from finding a new equilibrium that's more conducive to improvements in Canadian competitiveness.

"We think that 1.2500 in USDCAD (which equals 0.8000 in loonie notation) is likely to provide stiff support," says Greg Anderson, global head of FX strategy at BMO Capital Markets. "We suspect that either a move above 1.2500 in EURUSD or/and a move above $40 in spot WCS crude would be necessary for USDCAD to get below 1.2500 prior to the 20-Jan BoC rate decision. There continues to be chatter that the BoC could cut its base rate target from 25bps to 10bps at that meeting. We don't think the BoC wants to expend that bit of precious ammunition on a situation where risk appetite is so robust, but we admit that 1.25=0.80 may be something that causes that to occur." 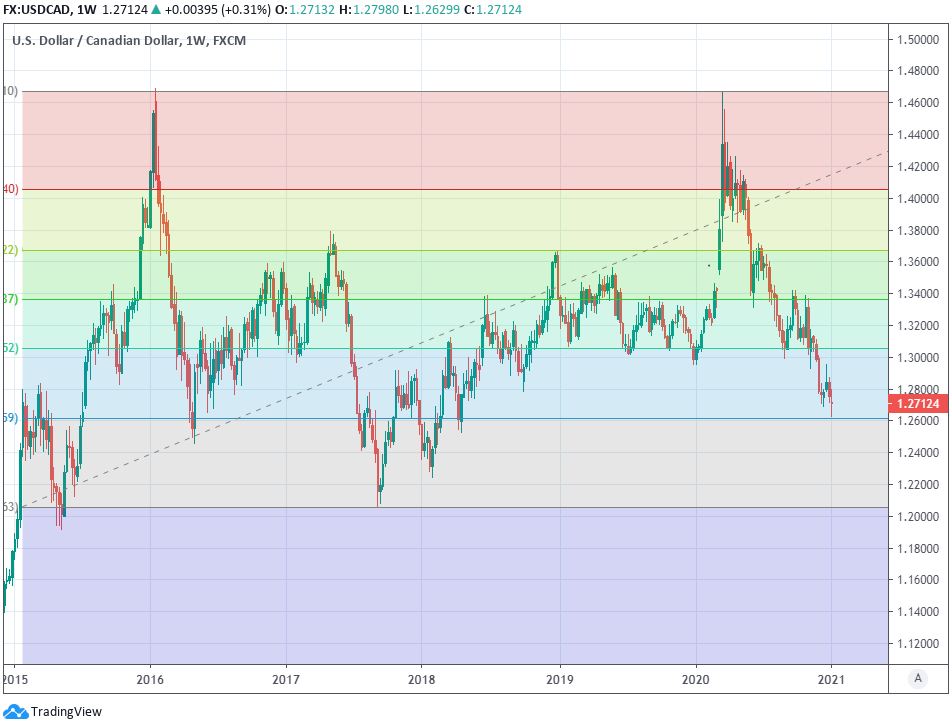 Above: USD/CAD shown at weekly intervals with Fibonacci retracements of 2017-to-2020 uptrend.

Canada's economy-enhancing exports have steadily been overtaken by GDP-eating imports in a sustained way during the decade since the financial crisis, prompting a pre-crisis trade in goods surplus to morph into an ever-growing trade deficits which is a direct subtraction in the calculation of GDP.

Although a variety of other factors have also been at play, the BoC and independent economists have identified Canadian Dollar resilience as an important driver of impairments to the competitive appeal of the country's exports on international markets and resulting shift from surplus to deficit in the trade accounts.

When not impairing a trade balance currency strength tends to make imported goods cheaper and in the process sap the inflation pressures that monetary authorities are charged with fostering at steady and sustainable levels.

As a result, central banks rarely tend to welcome appreciating domestic currencies although the BoC has even further cause for concern because Canadians have the highest household debt-to-GDP levels among major industrialised economies, which means the country can no longer rely on debt-funded consumer spending for growth.

"Overall 7 of 11 export categories actually declined," says Royce Mendes, an economist at CIBC Capital Markets, referring to November's trade balance figures released by Statistics Canada on Thursday. "The recent strength of the Canadian dollar will support a narrower trade balance in the near term by making imports cheaper. But the Bank of Canada will be concerned with how much of a headwind the loonie's appreciation is to the competitiveness."

Rising household indebtednes, especially at the hands of the coronavirus, has left the manufacturing industry with a larger than usual role to play in the forthcoming recovery and one that's more critical to the economy's longer-term prospects than at any point in the past. 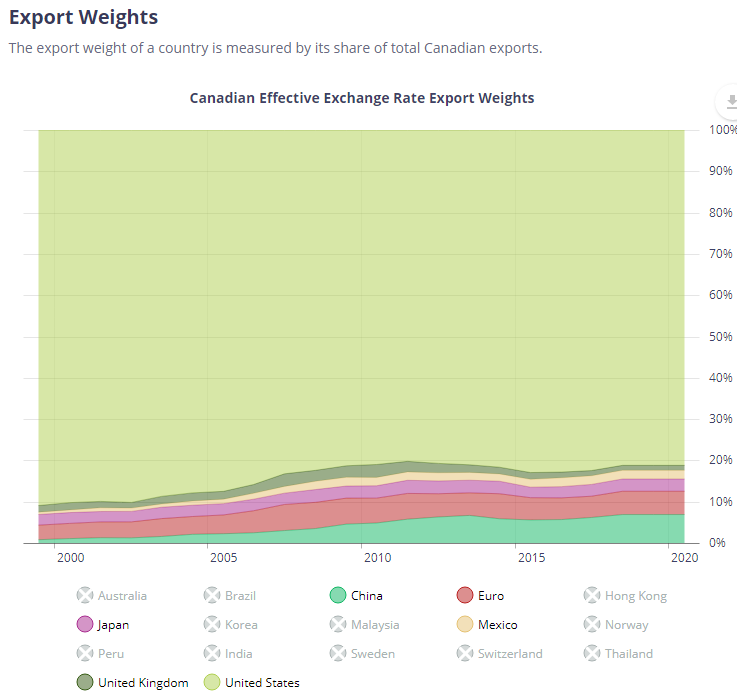 It could be likely that further currency strength is met by a BoC response, although it's not clear if  this would be an interest rate cut or other action.

What is certain however, is that investors and the Loonie are ill prepared for any move that further reduces the cash returns paid to investors in Canadian bonds. In other words, the Loonie could be troubled at least for a period if the bank cuts rates or expands its quantitative easing programme.

Pricing in the overnight-index-swap market implied this week that a cash rate of 0.18% is likely to for Canada come March 12, the date of the BoC's second 2021 decision, which is a fraction below its current 0.25% and almost an equal distance above the 0.10% that might prevail following any cut.

This is partly because the BoC had indicated earlier that it's unlikely to cut the main borrowing benchmark further from current levels, although any move down to 1.25 in USD/CAD would put further upward pressure on the trade-weighted Loonie exchange rate and could be what forces the bank into action.

"This morning the model has fair value at 1.2686, so with spot circa 1.2650, it looks likely to remain on the sidelines (but with a bias to be sell rallies)," Anderson says Wednesday, of BMO's financial model which values as well as trades in USD/CAD. "Our human view on the pair is that it looks reasonably likely to make a run down to 1.2550 over the next few days, but that is where we suspect it is likely to get stuck." 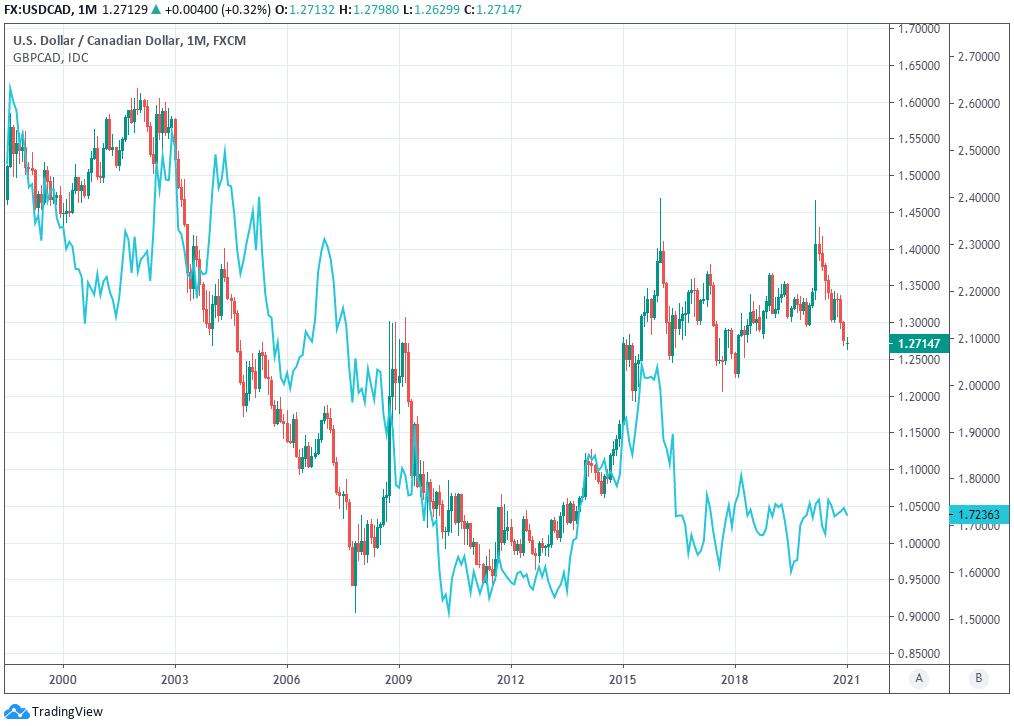