The Pound-to-Canadian Dollar exchange rate could move higher over the medium-term and build on a multi-week uptrend, according to strategists at Canadian lender Scotiabank who've noted a technical backdrop that's turned bullish alongside market expectations for a Brexit breakthrough.

Pound Sterling remains one of the better performing major currencies with gains over the past 24 hours coming agaisnt a Canadian Dollar that appeared hamstrung by a pullback in North American stock markets.

The latest price action followed explosive gains at the opening of the week which took GBP/CAD above a key resistance level on the charts, while opening a door to the prospect of further gains over the coming days and weeks.

"The GBP has made more definitive progress beyond recent ranges and through consolidation resistance in the upper 1.72s," says Juan Manuel Herrera, a strategist at Scotiabank. "GBPCAD is trying to break higher."

The Pound-to-Canadian Dollar rate was trading above 1.74 again Wednesday and has maintained a steady uptrend since falling from near 1.76 to below 1.70 in the early days of September: 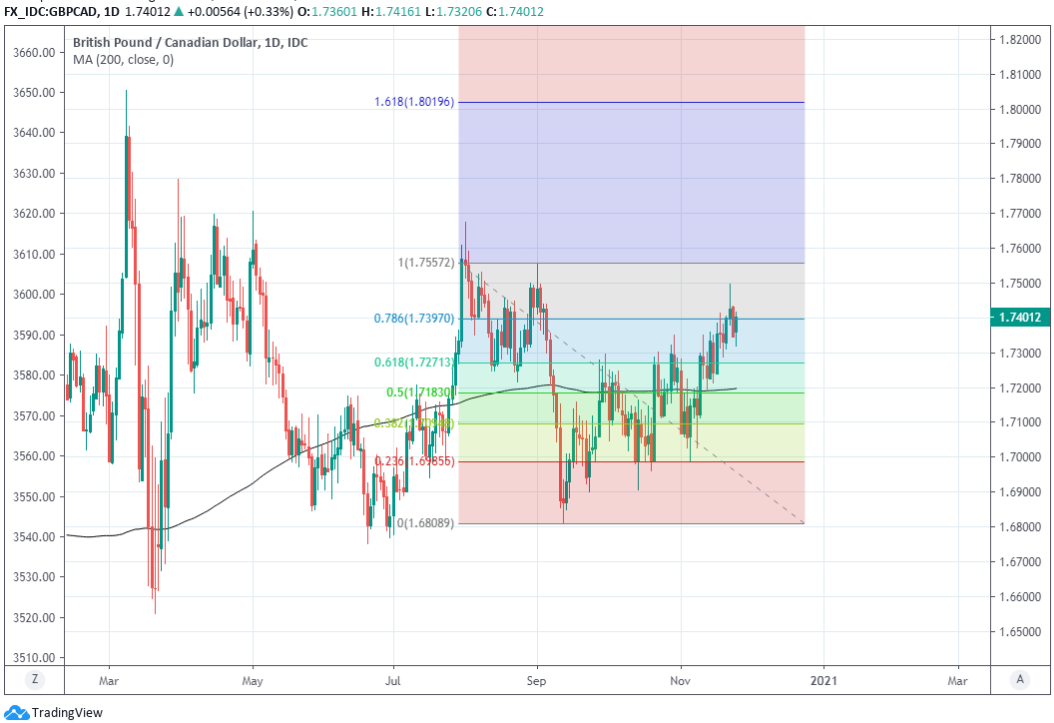 Sterling had retraced almost 80% of its September loss by Wednesday but it's been long slog for the British currency to get back above 1.74, with both that level as well as the earlier 1.7271 threshold having mounted a formidable resistance along the way.

Nonetheless, the Pound has also been increasingly resistant to attempts at knocking back toward September's levels, resulting in a series of higher lows for prices that have been accompanied by a matching series of higher-highs, leaving the appearance of at least a corrective uptrend on the charts.

"Trend signals are aligned bullishly—but still relatively weakly—across the short, medium and longer term timeframes. Longer run charts highlight the solid support the GBP has found on weakness in the past three months. We think the cross should remain wellsupported on minor dips (to the upper 1.73s) now and look for gains to progress towards 1.7600/50," Herrera says.  "USDCAD is little changed on the week as the market continues to press support in the low 1.30s....Initial resistance is 1.3100, with the USD possibly picking up a bit more support above here for a push to the 1.3170/75."

Herrera and the Scotiabank team look for Sterling to continue higher against the Loonie, potentially reaching the 1.76 threshold last seen in late August and early September.  Meanwhile, Canada's Dollar is expected to soften a touch against the greenback, which is also significant for Sterling's outlook.

The Pound-to-Canadian Dollar rate would trade just above the 1.75 threshold if USD/CAD crept higher toward 1.31 while the main Sterling exchange rate GBP/USD retested the top of the range anticipated for it this week by Scotiabank, given GBP/CAD always closely reflects relative price action in those other two exchange rates.

Sterling would rise above 1.76 if GBP/USD advanced back to it own early September high over the coming days or weeks, although as ever, whether it does or not could depend greatly on the outcome of the Brexit process. 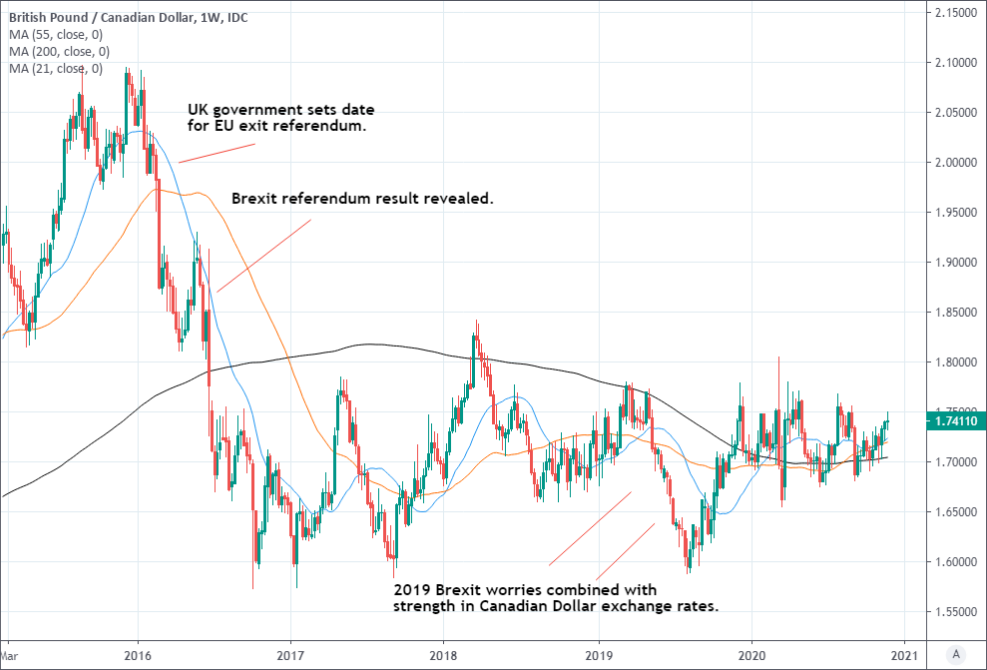 Above: Pound-to-Canadian Dollar rate at weekly intervals with 21 (blue), 55 (orange) and 200-week moving-averages.

In that regard, European Commission chief Ursula von der Leyen said Wednesday that "genuine progress" had been achieved in the Brexit negotiations but that the risk of failure remained. When the EU has asked for, or simply spoken of "progress" over recent years, it's almost always been in reference to compromises on the part of the UK.

EU sources say there’s no point carrying on ‘pointless negotiations’ which is why Mr Barnier’s travel plans have not been confirmed BUT his expected travel to London hasn’t officially been cancelled, either. Interesting to see if UK chief negotiator David Frost makes statement /3

Meanwhile, Prime Minister Boris Johnson told parliament that "our position on fish hasn't changed. We'll only be able to make progress on if the EU accepts the reality that we must be able to control access to our waters," while saying nothing in relation to other contentious European demands including the for so-called level playing field terms around state aid, environmental regulation and taxes as well as other non-environmental taxes.

Von der Leyen implied when addressing the EU parliament that there's been progress in relation to these issues too, saying "In the discussions about state aid, we still have serious issues, for instance when it comes to enforcement."

The EU has demanded from the get-go that Britain remain bound by all of its rules in the above areas while the political declaration accompanying the EU withdrawal agreement, when combined with new powers afforded to Brussels by the EU27 in July, implies scope for the EU to pursue new powers over the UK including in relation to tax matters where it never had competence during the country's period of official membership.

PM Johnson has so-far resisted all of those demands, while British negotiator David Frost said in his last official remarks; "We are working to get a deal, but the only one that's possible is one that is compatible with our sovereignty and takes back control of our laws, our trade, and our waters. That has been our consistent position from the start and I will not be changing it," without ruling out a possibly pending change of position by PM Johnson.