New research from TD Securities shows that the next few weeks will see a retreat in the value of the Canadian Dollar, based on the observation that technical and fundamental drivers are turning less supportive.

"One of the significant concerns we see in the month ahead is that the loonie trades with too much optimism relative to fundamentals and techncials," says Mark McCormick, Global Head of FX Strategy at TD Securities.

Expectations amongst analysts at TD Securities are that the next month offers more of a retreat than an extension of the current wave of optimism, which could leave the Canadian Dollar "quite vulnerable".

They express this view by going 'long' on the U.S. Dollar-Canadian Dollar exchange rate in anticipation of appreciation from levels around 1.31.

The spot USD/CAD exchange rate is currently quoted at 1.3032.

Weakness in the Canadian Dollar against the U.S. Dollar could meanwhile present further support to the Pound-Canadian Dollar exchange rate, which is already in a multi-week uptrend and is quoted at 1.7404.

The call for near-term weakness in the Canadian Dollar rests to a great extent on modelling conducted by TD Securities that suggests investor optimism relative to the reality posed by an ongoing covid-19 crisis is somewhat misplaced.

The Canadian Dollar has a 'high beta' to investor risk sentiment i.e. it is positively aligned with sentiment as expressed by the U.S. S&P 500 index.

As such, it is vulnerable to any setback in sentiment.

"A wide gap has opened up where the recent pullback in mobility implies a move towards 0.74 (1.35 in USDCAD)," says McCormick. "Most of our top-down models imply that most risk assets across the board are mispriced to the mobility factor. CAD's simply an element of this trading theme that looks like to sour ahead of yearend." 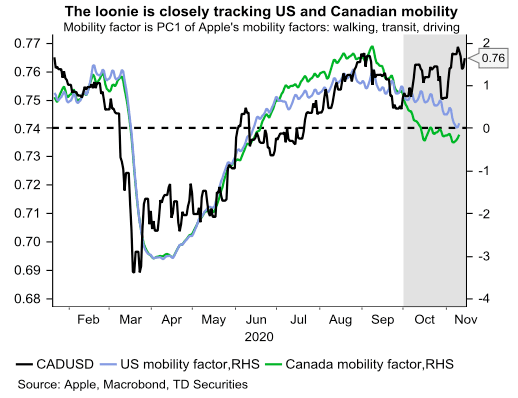 "We also think the U.S. election outcome is overhyped a bit for CAD. Less US stimulus means less Canadian growth than a Blue Wave would have produced, while Biden's unlikely to do the pipeline projects any favours," says McCormick, adding: "Our positioning framework (PIT) also implies a higher level in USDCAD. That means market signals are looking for a move towards 1.33 rather than a break below 1.30 in the weeks ahead."

But the longer-term picture into 2021 appears to be more supportive of the Canadian unit.

The boost to global economic growth in 2021 should benefit the Canadian Dollar according to analysts at investment bank Goldman Sachs, who have told clients buying the currency forms one of their top trades for the year ahead.

In a forecast note detailing their currency views for 2021, Goldman Sachs strategists say they prefer expressing a pro-growth view via buying the Canadian and Australian Dollars, "these currencies should see positive returns over the next 12 months as the global economy reopens and central banks across the globe maintain accommodative policy," says Zach Pandl, an economist with Goldman Sachs.

The reopening of the global economy following the coronacrisis of 2020 should meanwhile disadvantage the U.S. Dollar according to analysts, who say the U.S. economy's period of outperformance will diminish as the rest of the world plays catch up.

Furthermore, the Dollar's 'safe haven' status - which served it particularly well in early 2020 when the covid crisis first mounted - will be of less use in the 'risk on' environment of the coming year.

Expectations for a boost to global economic growth in 2021 have been aided in November by news that three different covid-19 vaccine candidates have proven their efficacy in preventing the transmission of covid-19 in phase three trials.

The rollout of the first vaccines could start in some countries by as early as December, with the U.S., UK and Germany indicating they have programmes in place.

However, Canada and Australia are believed by Goldman Sachs to have economies that are in stronger shape than many of their peers, owing to their response to the pandemic. This should allow an outperformance advantage in 2021 that could benefit their currencies.

"Both Canada and Australia are handling COVID fairly well and their central banks should be done cutting rates," says Pandl.

Analysts at Goldman Sachs are forecasting global commodity prices to rally as the global economy grows over coming months, a trend that will likely benefit 'commodity currencies' such as the Canadian and Australian Dollars.

"The Australian Dollar and the Canadian Dollar should see the best returns in a commodity price rally," says Pandl.

In fact, a new 'bull cycle' for the commodities sector is being predicted: "Our outlook should be particularly supportive of the commodity complex on boosts to demand and structural underinvestment (especially in non-energy commodity producing sectors), paving the way for a new bull cycle to emerge in 2021."

The investment bank expects both oil and copper to perform particularly well in the near-term, which should, respectively, benefit the Canadian and Australian Dollars the most in G10.

Putting their view into action, Goldman Sachs are, "going long a basket of these two currencies is one of our top trades going into 2021," says Pandl.

Goldman Sachs forecasts show expectations for the USD/CAD exchange rate to be at 1.28 in six months and 1.25 in 12 months.