-GBP/CAD supported at 1.6990, may rise with Brexit optimism.
-May reclaim 1.76 if Brexit deal reached and CAD holds steady.
-BoC, August GDP in focus for CAD in quiet week for GBP data.

The Pound-to-Canadian Dollar exchange rate has strong support at nearby levels and could have scope to recover further in the coming days as Brexit trade talks again promise progress.

But the Canadian Dollar was also one of the underperformers for the session, which helped to limit GBP/CAD's intraday decline to 0.60% and still left it with a half a percent gain over its Canadian counterpart for the week.

"Trend resistance off the September high and bearish-leaning, short-term DMI oscillators suggest some downside risk for the GBP from current levels, as does the GBP’s slide below the mid-point of the broader range (and the 200-day MA) since the start of the month," says Juan Manuel Herrera, a strategist at Scotiabank. "We note, however, the strong GBP rebound (outside range reversal) from the 1.69 zone last week which leaves this point as the key level for the GBP to hold if it is to avoid a retest of the mid-1.67 range base. We are inclined to look for a little more GBP softness from here while 1.7135 resistance holds."

Neither Friday nor Thursday's losses were enough to fully unwind the rally that lifted Sterling on Wednesday from 1.6990, to 1.7265 by the New York close of the evening.

Wednesday marked the fourth time in October that GBP/CAD declined an invitation from the market to close below 1.6990, indicating solid support that might require either standout strength in the Loonie, or extreme and isolated weakness in Pound in order for the exchange rate to get below it. 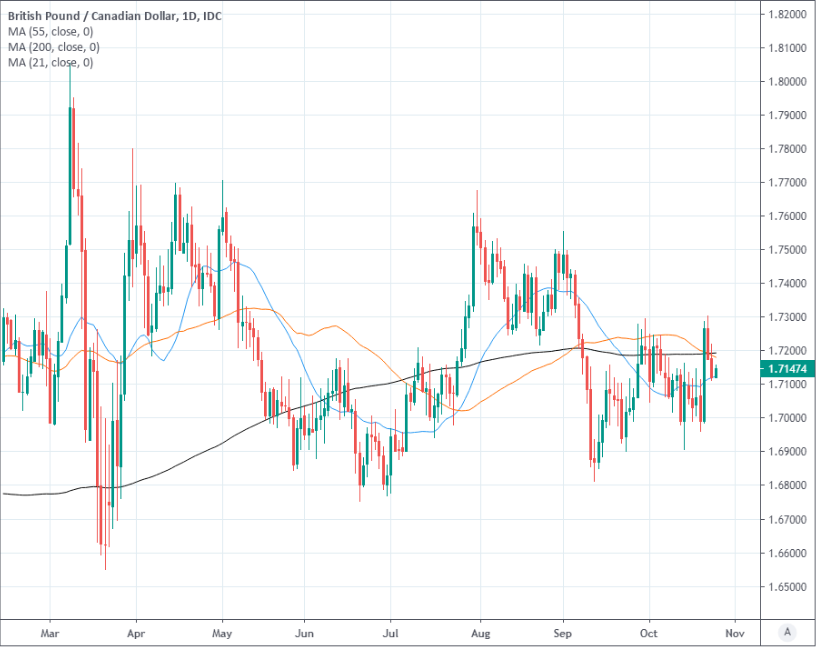 Weakness in Sterling might be unlikely if the Brexit talks remain on track, the market remains oblivious to tightening coronavirus restrictions and analysts are right about this leading GBP/USD back toward 1.32, en route to 1.35.

Such an outlook for the main Sterling exchange rate is bullish for the Pound-to-Canadian Dollar, which would rise back to 1.7680 if GBP/USD traded at 1.35 at the same time as USD/CAD remained around Friday's 1.31. (For the latest institutional GBP/CAD forecasts, including submissions from JP Morgan, Morgan Stanley, Citi, Barclays and Lloyds, please see the latest download document available from our partners at Global Reach).

Brexit risks may have shifted enough for there to now be at least a 50/50 chance of a deal being struck by the deadline of mid-November, which might mean Sterling is misplaced in the lower half of the range it's traded in since early September when it fell from 1.75 to a low of 1.68. 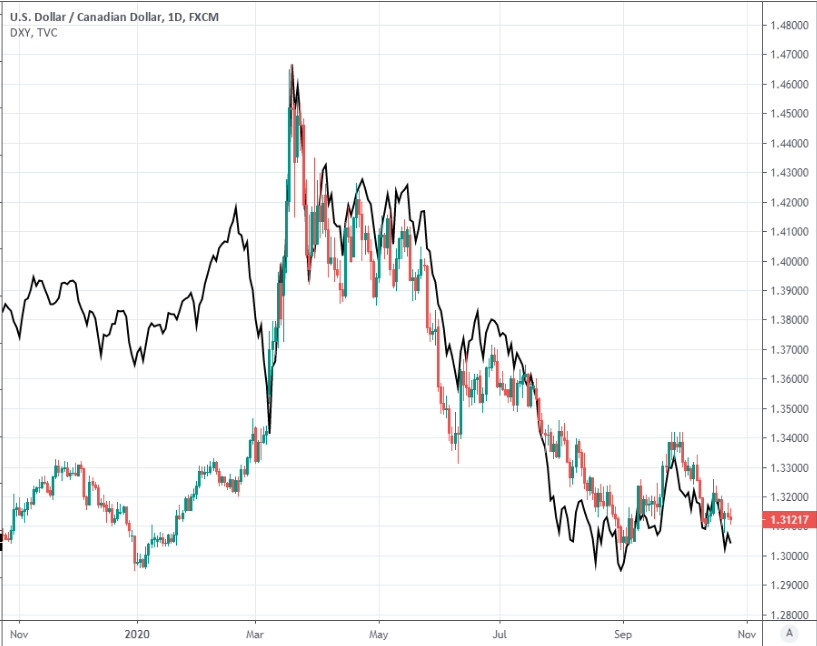 Above: USD/CAD rate shown at daily intervals alongside U.S. Dollar Index (black line, left axis). Automatically secure your ideal exchange rate when it is reached, find out how, here.

The Loonie is expected to remain around recent levels against the greenback through Wednesday's Bank of Canada (BoC) meeting, posing little threat to Sterling. Brexit, government efforts to contain the coronavirus and investor risk appetite will be the main focus of the Pound in a week that is devoid of meaningful economic data for the UK, although the same cannot be said for the Canadian Dollar.

"Focus will fall mainly on the risk environment and how political developments (or the lack of them) affect sentiment. The Bank of Canada policy meeting and MPR will provide Governor Macklem an opportunity to provide some colour on prospects but we doubt he will be too explicit, given prevailing uncertainties. There is no expectation of a rate cut and little sign of a desire to formally lift the pace of asset purchases," says Shaun Osborne, chief FX strategist at Scotiabank. "Our week-ahead model again tips the USD for modest gains towards 1.32 within a wide 1.30/1.3385 range.

The Loonie is the most sensitive of major currencies to movements in the S&P 500 so will be vulnerable if stock markets continue last week's declines, although it will also navigate an monetary policy decision from the BoC and August GDP data that's due out on Friday. 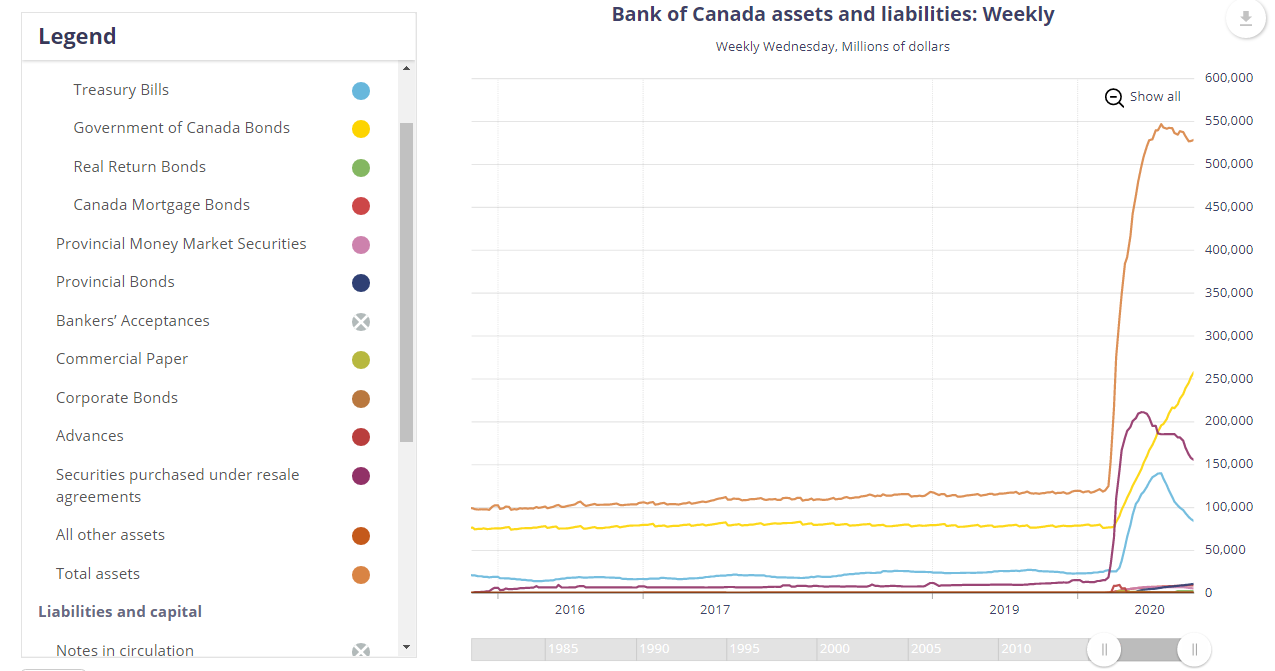 The BoC will announce its latest policy decision at 14:00 London time on Wednesday and consensus looks for its overnight rate to remain at 0.25%. The bank has pledged to leave rates at 0.25% until “economic slack has been absorbed so that the 2 percent inflation target is sustainably achieved," and to continue buying "at least $5 billion per week of," government bonds per week, reducing the 'risk free rate' that gets baked into all interest rates charged across the economy.

"Yields aren’t so low that the Bank of Canada would risk an outright downsizing of the whole QE program next week. The optics around pulling back stimulus just as newly announced provincial lockdowns take effect — alongside rising case loads — would be interpreted as being a bit ‘odd’, to put it mildly," says Avery Shenfeld, chief economist at CIBC Capital Markets. "We view the Bank’s QE calibration as a multi-quarter exercise, and one that will be entirely consistent with the ebb-and-flow with the virus."

The BoC, which had rarely dabbled in the market for government bonds before the pandemic, has grown its holdings of the domestic government bond market so that they now rival those of central banks which have been buying their own government bonds for the last decade. The speed with which the BoC has reached a 30% share of the market is testament to the level of support it's sought to provide, but if it doesn't reduce the quantitative easing programme soon it will own half of the market before year-end. 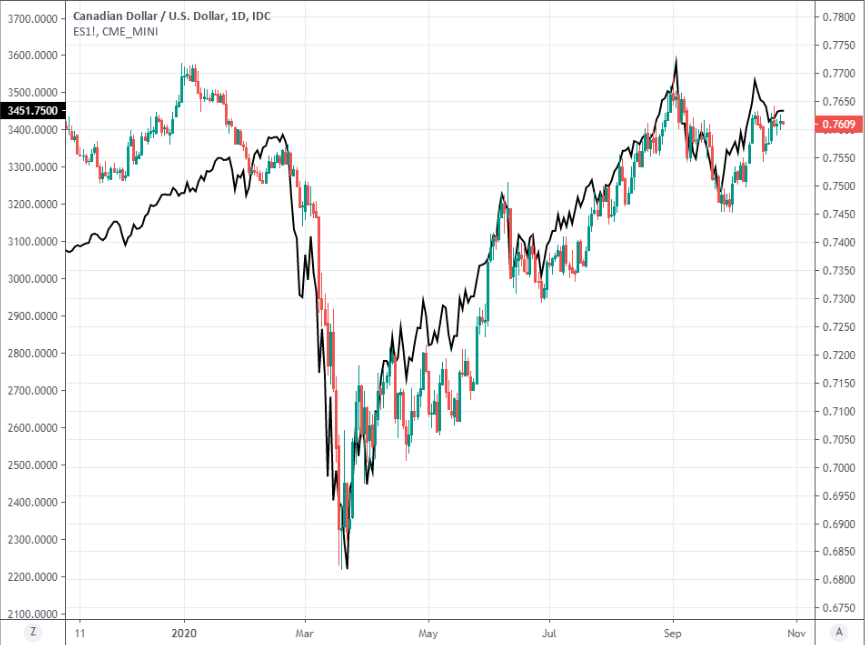 "CAD keeps showing good resilience to periods of weak risk appetite but struggles to keep the pace of other pro-cyclicals as risk assets rally. Still, USD/CAD is finding consolidation around the 1.31/1.32 level, which could be where we will see the pair trade in the run-up to the US elections," says Francesco Pesole, a strategist at ING.

Shenfeld and the CIBC team look for the BoC to reduce the number of securities it buys under it various programmes this week, but to keep the total value of its purchases unchanged for now. Although eventually, potentially early in the New Year, they see the BoC reducing its weekly purchases from C$5.0bn to C$3.0bn, before going on to "Yield Curve Control (YCC) aimed at the 5yr sector to keep borrowing rates low."

"These aren’t new narratives for the CAD market to take away this coming Wednesday, and a ‘rubber stamp’ should do little for price action in the here and now," says Bipan Rai, North American head of FX strategy at CIBC Capital Markets. "We expect that price action should remain contained within the 1.30-1.34 area over the coming months. On the crosses, the Bank’s shift should continue to promote CAD strength."

Once beyond Wednesday the Canadian Dollar will turn its attention to Friday's August GDP data, although there was no consensus available at the time of publication. CIBC looks for a 0.8% monthly increase to follow July's 3% gain. However, the bank says it'll be Statistics Canada's flash estimate for September that garners most of the market's attention, given that it'll provide an early indication of how the quarter ended and so, how the economy coped as the coronavirus began to spread again. 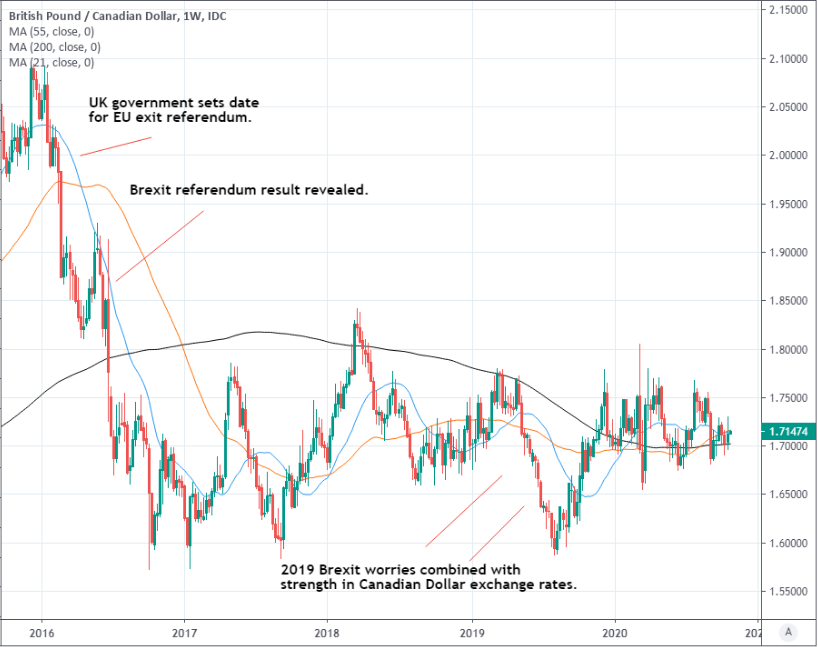