The Pound-to-Canadian Dollar rate clung to much of this week’s gain even as it softened on Thursday as investors continued to wager that a Brexit trade deal is in the pipeline after all, although Sterling’s recovery risks being crimped by the Loonie’s response to the outcome of the U.S. election.

Pound Sterling has been boosted by revived hope that a trade agreement will be reached with the EU following a UK government u-turn on its earlier decision to cancel talks with Brussels, bolstering already-resilient expectations for a ‘no deal’ exit from the transition period to be averted.

Negotiators are thought to have until mid-November after which national and supranational authorities would likely not have enough time to ratify a new treaty in law before the December 31 end of the transition. This means the talks will likely be in their final legs, if not concluding soon after Americans cast their election ballots in person.

The incumbent President Donald Trump has been credited with little prospect of an election victory, while opposition candidate Joe Biden of the Democractic Party remains the favourite for many pollsters with less than a fortnight to go before the November 03 vote.

This matters for all currencies, but especially the U.S. and Canadian Dollars as well as by implication, the Pound-to-Canadian Dollar rate.

“Day-to-day movements in risk (using the S&P as a somewhat and admittedly crude measure of risk appetite) are the predominant driver of DM FX at the moment. The chart on the right shows that this is a relatively recent phenomenon,” says John Velis, an FX and macro strategist at BNY Mellon. “It’s interesting that the correlation of the loonie with the US equity market is the highest in the G10 and its USD beta is almost exactly 1. This underscores the view that what happens to the USD is what happens to CAD.”

Stock markets might be likely to rise in response to a decisive victory by either of the candidates at least in the short-term, but onerous climate and tax policies of opposition candidate Joe Biden could mean the S&P rally is stronger in the event of a wild card win by the incumbent, meaning a Trump victory could be an outright bearish outcome for Sterling even in the event a Brexit deal is agreed.

On the other hand, an outcome that leads to S&P 500 declines could weigh on the Loonie and lift the Pound-to-Canadian Dollar rate. More so if this takes place at the same time or shortly after a Brexit-inspired rally in Sterling. 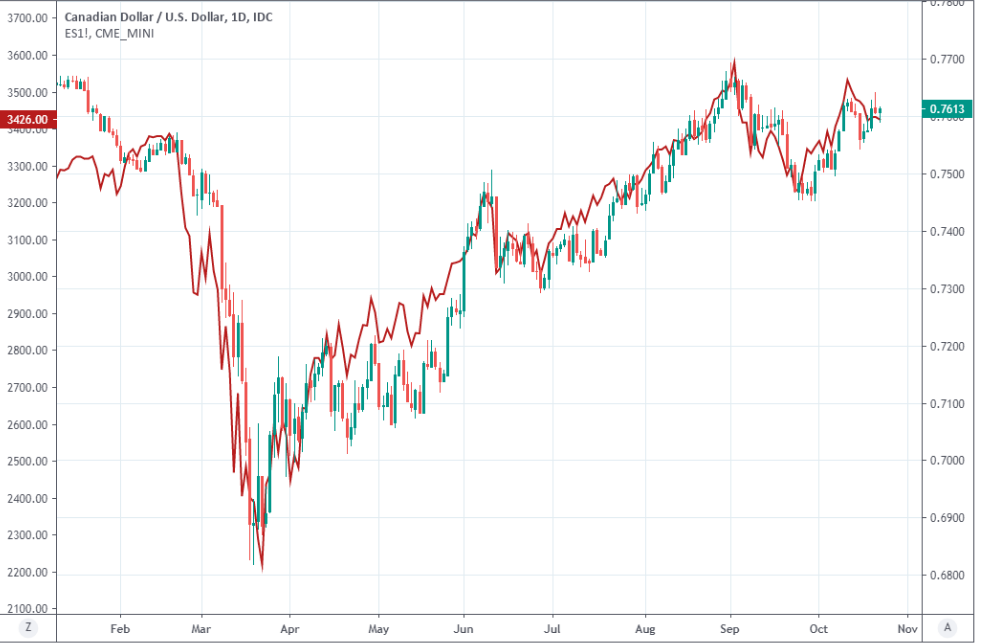 Above: CAD/USD shown at daily intervals and alongside S&P 500 (red line, left axis).

The most negative outcome for the S&P 500 could be one that sees the result contested in the courts, leading to months of even further uncertainty for the U.S and global economies, although many analysts consider this a likelihood only in the event of a narrow loss by President Trump.

In this election a higher proportion of votes are expected to be cast by mail than is normal, at least partly as a result of the pandemic, which has led the incumbent to allege foul play by opposition activists.

A contested election and any resulting declines in the S&P 500 could lift GBP/CAD even further in the event that a Brexit deal is agreed next month.

“The EU’s negotiating team will be welcomed back to London later this week,” says Eric Bregar, head of FX strategy at Exchange Bank of Canada. “We think GBPUSD buyers need to show they can hold chart support in the 1.3060-70s before this market can make a meaningful step towards a new uptrend.” 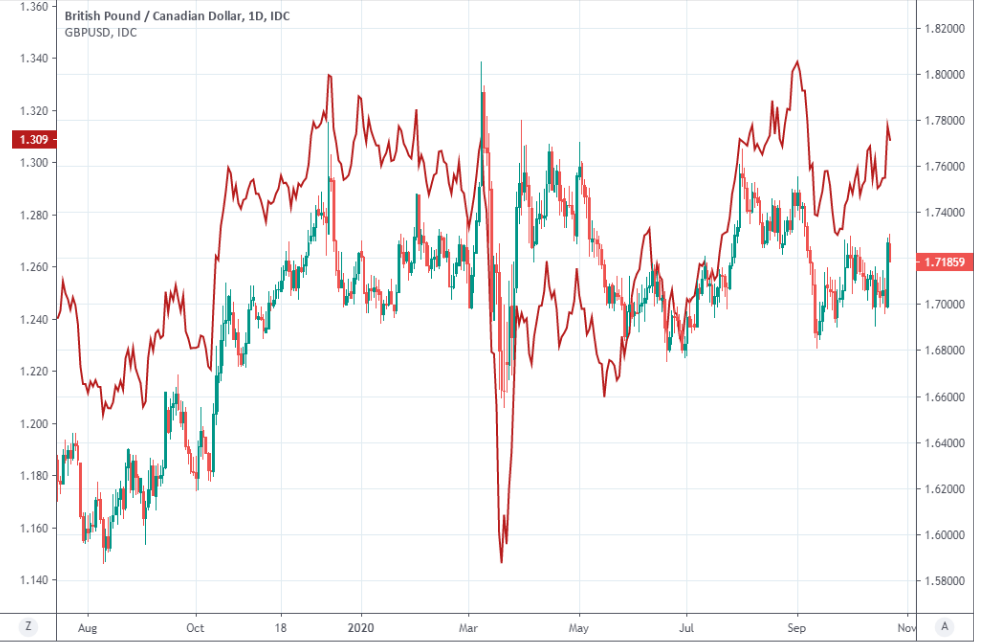