The Pound-to-Canadian Dollar exchange rate is tied to the 21-day moving average on the daily chart pending a Brexit-inspired breakout, which could come in the latter half of this week following an eagerly-anticipated European Council summit that will see both sides take stock of progress in the trade talks thus far.

Few if any expect a trade deal to be announced this week although investors are hoping as a minimum that Thursday’s October 15 UK deadline for progress to be made will pass without Prime Minister Boris Johnson walking away from the table as he’s previously threatened to do.

The danger is that, even if compromises are likely to lead to a political agreement on trade terms sooner or later, domestic political considerations could necessitate theatrics and a somewhat cynical political pantomime beforehand, which might risk pulling the rug out from under the Pound.

"The market continues to price sterling as if a breakthrough is more likely than not this week, but the situation will almost inevitably produce significant volatility in either direction depending on the outcomes around the Thursday deadline," says John Hardy, head of FX strategy at Saxo Bank. 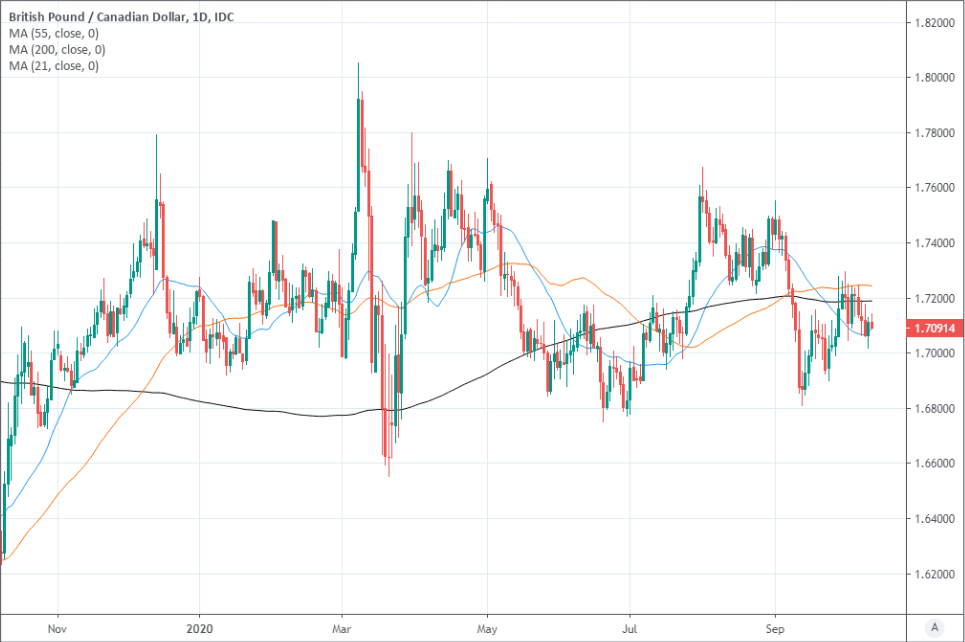 “We think that a deal will come before the 'hard deadline' in late November and remain constructive on the GBP in the long-term. That said, the GBP may have to endure a bout of politics-induced volatility next week,” says Manuel Oliveri, a strategist at Credit Agricole CIB.

If Sterling fell back toward 1.27 against the U.S. Dollar as the Loonie oscillated around 1.32 against the Dollar, as some local firms say it should, the Pound-to-Canadian Dollar rate could potentially fall as far as 1.6765.

However, any positive progress in the talks could enable GBP/USD to close in on 1.32, which would lift GBP/CAD sharply and as far as 1.7425 in a world where USD/CAD is still knocking around 1.32.

The outcome of this week's chapter in the Brexit saga could be the difference between whether the Pound-to-Canadian Dollar rate charts a course for sub-1.70 levels or breaks back in the direction of its early August highs. But much also depends on investor appetite for the U.S. Dollar. 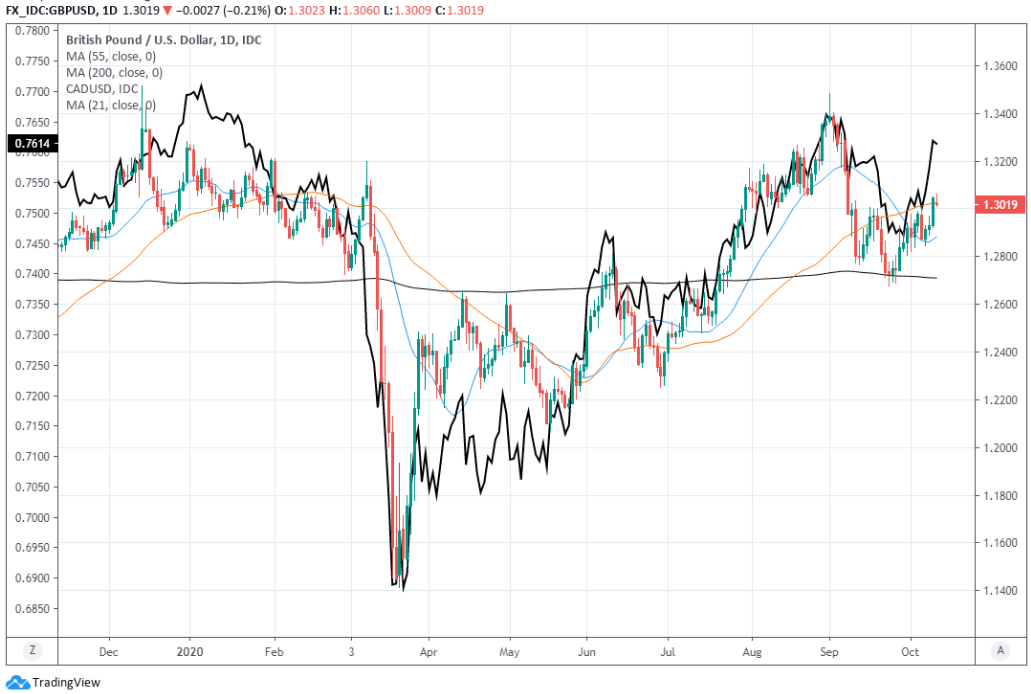 For the Canadian Dollar, broader market trends are likely to be the key driver.

“CAD has the tightest, positive correlation with US equities among the major currencies while the USD, as measured by the DXY’s performance, has the strongest, inverse correlation with risk. The focus on risk appetite has overshadowed usual seasonal patterns which are (usually) more supportive for the USD moving into Q4; risk appetite will remain a key driver of USDCAD movement in the coming week at least,” says Shaun Osborne, chief FX strategist at Scotiabank. “Our week-ahead model tilts somewhat higher for USDCAD towards 1.32, around a broad, 1.3000/1.34 range.”

Key to investor sentiment over the coming days are U.S. election opinion polls as well as the impact that corporate earnings have on indices like the S&P 500, which Canada’s Dollar has a strong positive correlation with.

Among the reporting companies are J.P. Morgan, Citigroup, Bank of America, Goldman Sachs and Morgan Stanley.

Earnings disappointments would weigh on the Canadian Dollar alongside the S&P 500 and could lift GBP/CAD this week, and vice versa. So too with any polling shift in favour of the incumbent President Donald Trump after odds favouring opposition candidate Joe Biden reached new extremes last week.

“Politics is driving the price action in FX markets at present, with the recent advance of Joe Biden and the Democrats in the polls before the elections (as well as persistent fiscal stimulus hopes in the US) propping up FX investors’ risk appetite and weighing on the USD. If there is a ‘blue wave’ in which Democrats gain control over the US presidency and congress, it could mean less assertive trade protectionism but more aggressive fiscal spending (good for risk) as well as a tougher crackdown on the Covid-19 pandemic (less supportive for the economy) in our view. In turn, this could continue to weigh on the USD vs risk-correlated currencies,” says Credit Agricole’s Oliveri.

The Canadian economic data calendar is quiet this week after last Friday brought with it another solid labour market report for September, although the Pound may take direction from any further moves by the UK government to flex its ministerial muscles with new coronavirus restrictions. 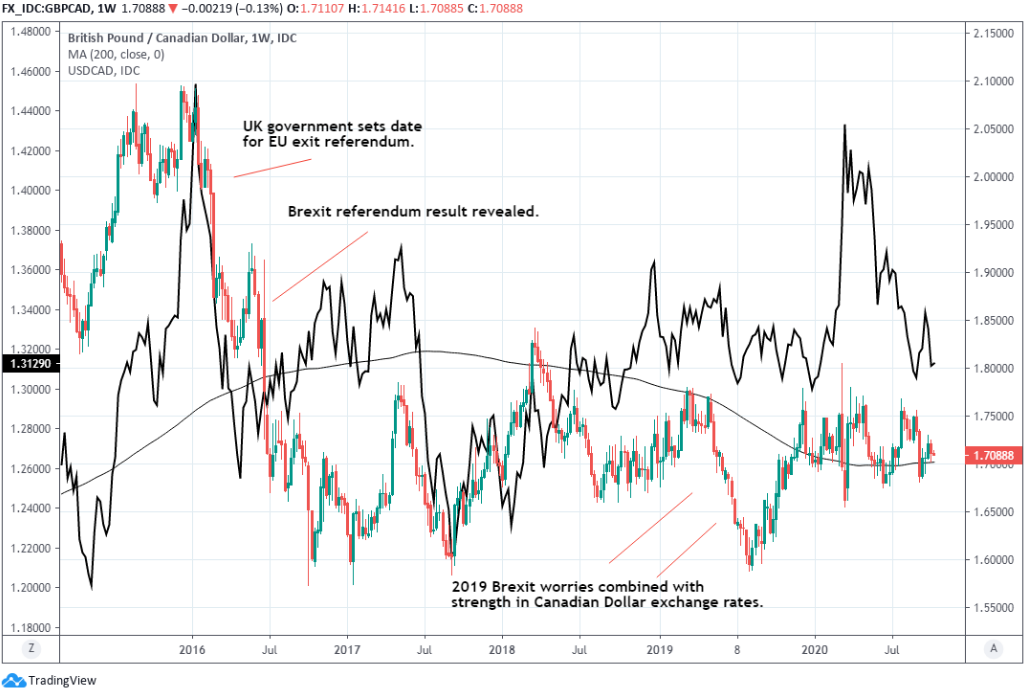 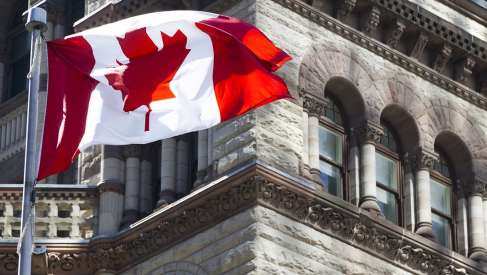 GBP/CAD’s November lows may mark end of the sell-off and a recovery to 1.7080 is likely in the short-term.

Currency tacticians at HSBC are looking for the Canadian Dollar to underperform the U.S. Dollar into year end, although it could be in for gains against the Euro says JP Morgan.