The Pound-to-Canadian Dollar rate has fallen to two-month lows amid an ongoing row over Brexit that still threatens the British currency, although Sterling’s plight could grow further if the Canadian Loonie resumes its August outperformance in line with forecasts from Credit Suisse.

Pound Sterling fell more than a full percent to 1.69 and its lowest since late July as investors expressed concern over the new Internal Market Bill which in the government's own words, will "breach international law," but is intended as “a legal safety net designed to protect our country against extreme or irrational interpretations” of the EU Withdrawal Agreement.

The controversial bill was introduced into parliament on Wednesday but has weighed on the Pound-to-Canadian Dollar rate all week given that it could prompt the most acrimonious form of 'no deal' Brexit possible, although losses were tempered on Thursday by weakness in the Canadian Dollar, which softened in response to a speech by Bank of Canada (BoC) governor Tiff Macklem.

But the Loonie is expected to benefit in the coming weeks from bullish market expectations for bond yields and interest rates in Canada, which is forecast to push USD/CAD back to late 2019 lows in moves that will have further implications for other exchange rates including GBP/CAD and EUR/CAD. Simultaneous falls in USD/CAD and GBP/USD are a recipe for a Pound-to-Canadian Dollar rate that drops like a stone.

“Forward OIS rates have now for many months priced in a policy differential that widens steadily in favour of a more hawkish BoC, compared to the Fed. The fact that BoC rhetoric has been devoid of any consideration on this topic despite its lasting presence signals in our view that the issue does not sit high in the list of urgent BoC priorities, and reduces the potential for dovish surprises from next week’s meeting,” says Shahab Jalinoos, head of FX strategy at Credit Suisse. 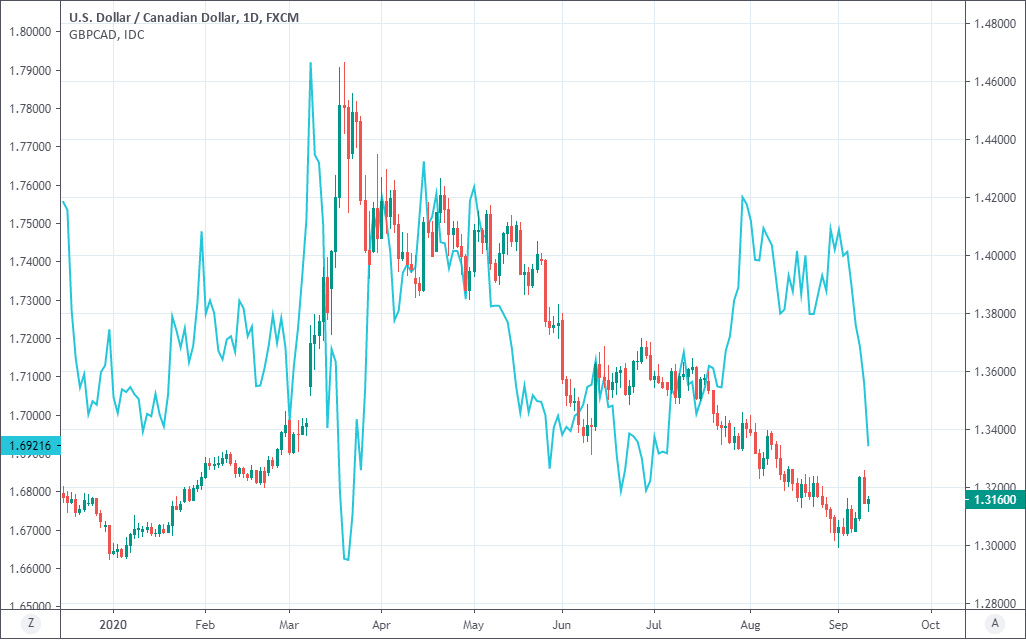 This was before Bank of Canada (BoC) said on Wednesday that Canadian and global economies are recovering in line with expectations while noting the neighbouring U.S. economy had picked up faster than expected. The BoC did caution however, that this will be followed by a “more protracted and uneven recuperation” phase that’s heavily reliant on BoC support.

The bank left its cash rate unchanged at the “effective lower bound” of 0.25% and committed to continue buying “at least” $5bn in Government of Canada bonds each week “ until the recovery is well underway,” although most notable in among all of this was a possible step in the direction of Japan.

There was contemplation among analysts of whether the BoC would follow in the footsteps of the Federal Reserve across the border by at least hinting about a possible shift to a so-called average inflation targeting regime, which promised even lower ‘real yields’ for the greenback and undermined the U.S. currency when announced.

“Last week we did a deep dive on CAD and revised our target lower from 1.3150 to 1.2900," Jalinoos says. "The key rationale behind the forecast revision is that the events of the past two weeks, namely the speeches by BoC officials and the change of guard at the Finance Ministry failed to provide markets with strong enough reasons to fight the USD currently."

The BoC said its ongoing government bond buying programme will now be “calibrated to provide the monetary policy stimulus needed to support the recovery and achieve the inflation objective,” where before it had said only that it would provide further monetary stimulus as needed. 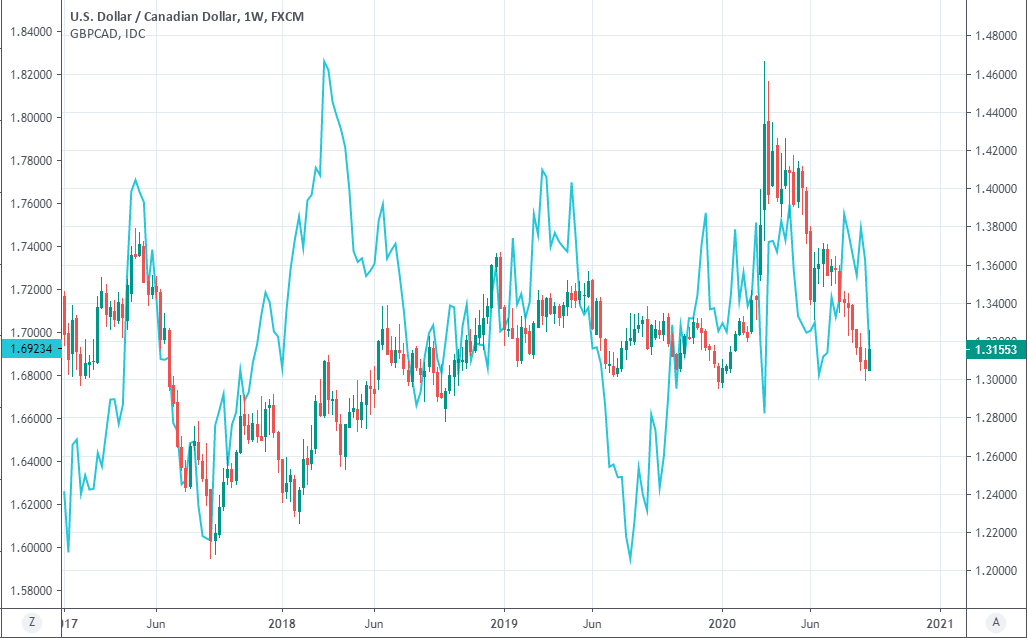 This could already amount to, or be a precursor for a form of ‘yield curve control’ like that used by the Bank of Japan where it sets bond yield targets and carries out transactions in the market in order to achieve those targets, all of which is supposed to support the economy and help deliver the 2% inflation target.

BoC Governor Tiff Macklem did say on Thursday however, that the bank will take the level of the Canadian Dollar into account when deciding how much support the economy needs over the coming months, in an apparent reference to the Loonie's earlier period of outperformance through August and into September.

USD/CAD rose as a result, just not by enough to save the GBP/CAD exchange rate or Pound Sterling more broadly, the worst performing major currency on Thursday.

“A low weekly close for the GBP this week will form the third leg of a weekly “evening star” signal, indicating a medium term peak developed around the recent test of 1.35. Note that this is also where Cable peaked in late 2019, prior to the drop back to the mid-1.25s (and the sharp fall to 1.14 in March),” says Juan Manuel Herrera, a strategist at Scotiabank, of the GBP/USD rate.

The main Sterling exchange rate, GBP/USD, fell one percent Thursday and while not all are bearish in their outlook for Sterling some are looking to see the British currency hit lows that last prevailed in early July. Much like Sterling has already done against the ‘high beta’ Canadian Dollar.

"It looked like the markets no longer cared about Brexit! But that didn’t last and the pound has now weakened to $1.29 and €1.09," says Paul Dales, chief UK economist at Capital Economics. "The financial markets have woken up with a bang to the possibility that the Brexit transition period ends on 31st December without a deal. That could set back the UK’s economic recovery from the coronavirus recession and prompt the pound to weaken from $1.30 now to around $1.15." 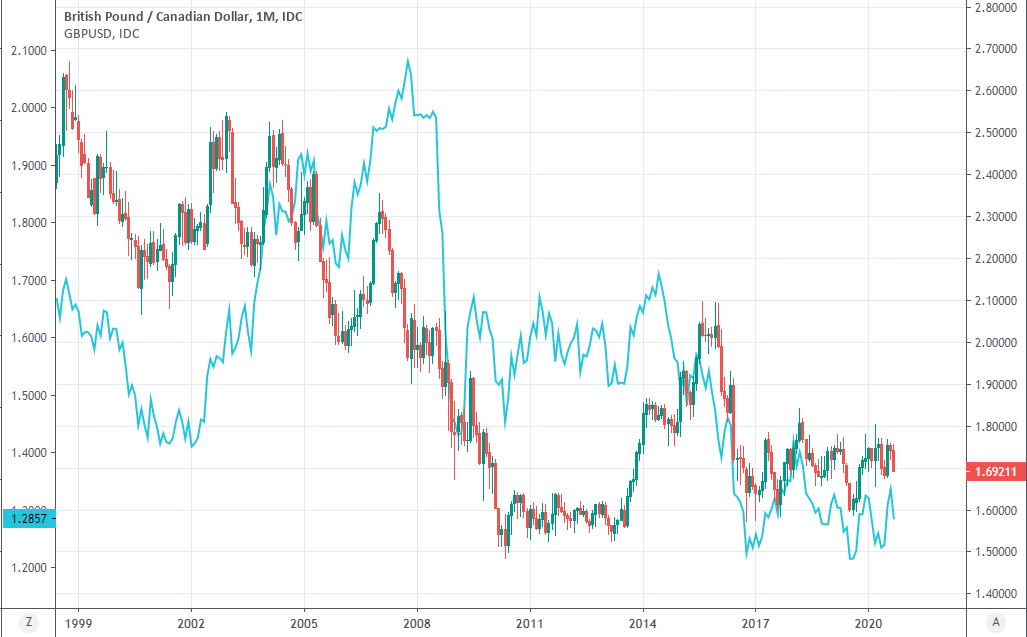 European Commission Vice President Maros Sefcovic described the government’s new Internal Market Bill as a “clear and substantive” breach of the EU Withdrawal Agreement on Thursday, referring to the United Nations registered treaty governing the Brexit process that is binding in domestic and international law.

The EU has threatened legal action, an end to the UK-EU trade negotiations and a possible ‘trade war’ if Prime Minister Boris Johnson’s bill makes it unreformed onto the UK statute book.

Meanwhile, some analysts are looking for GBP/USD to fall back to around 1.2670 which, when combined with Jalinoos’ USD/CAD target, implies a GBP/CAD fall back to 1.6346, a level not see since October 2019.

However, the downside risks would grow with losses in GBP/USD, which analysts have previously suggested could fall as low as 1.10 in response to a ‘no deal’ Brexit. With USD/CAD trading at 1.29, a GBP/USD rate of 1.10 would push the Pound-to-Canadian Dollar rate to a record low of 1.4191.

"The sharp turnaround lower in GBP over the past week is a stark reminder of the vulnerabilities the currency faces. We continue to expect sterling weakness and see GBP-USD falling to 1.20," says the FX strategy team at HSBC.