Pound Sterling had led major currencies higher in the prior session as investors favoured the British unit in another move out of the U.S. Dollar but it was paring those gains in the noon session Wednesday after Chancellor Rishi Sunak's mini budget did little to dispel the dire outlook for the economy. However, modest Pound-to-Canadian Dollar losses were also aided by a recovery in the loonie, which advanced on the U.S. Dollar and many other rivals Wednesday.

"£10 off your lunch in August (only Mon-Wed) does not speak to much global ambition," says Mark Wilson, chief market analyst at Markets.com. "It was heavy on some old classics – goose the property market, plug some vague job-trainee-youth type scheme, cut VAT for a bit. But it had something new too: the eat out to help out scheme has the air of the kind of bag-of-fag-packet policy idea dreamt up on the hoof by Ollie Reeder in The Thick of It. I almost expected to hear the chancellor announce more quiet carriages on intercity trains."

Sunak told parliament employers will receive a £1,000 (C$1,700) bonus for every employee they return to their jobs through January and announced a 'kickstart scheme' that will provide grants to those who hire young people as apprentices and trainees. But the furlough scheme will be wound down in October with the economy likely still encumbered by regulations and the virus.

"No one can accuse the Chancellor of penny-pinching. Indeed, once you add in the adverse effects on the public finances from the weak economy, the result could be that the Chancellor ends up borrowing a whopping £360bn (18.5% of GDP) in 2020/21. That could push up the debt ratio from 80% in 2018/19 to 106%," says Paul Dales, chief UK economist at Capital Economics. "Perhaps most striking was that the Chancellor hardly touched on phase 3 at all, which is “putting the public finances back on a sustainable footing” by ensuring that in the future the debt ratio declines. That’s unlikely to get any airtime until the Budget-proper late this year at the earliest."

Property purchase taxes known as stamp duties will be waived until March for those with a value of less than £500k while the value-added-tax rate will be cut from 20% to 5% for hospitality and tourism businesses. But rising housing demand does little for the vast majority of the population while even a significant reduction in VAT fails to compensate businesses whose operating capacities have been cut substantially, if-not life threateningly by government regulations.

"Overall this wasn’t a massive fiscal package, with other countries like Germany announcing much larger fiscal packages, and the Chancellor is likely keeping his powder dry until the autumn," says Jing Teow, senior economist at PwC. “All this largesse doesn’t come cheap and at some point in the future there may need to be a period of fiscal consolidation through higher taxes or lower spending - but clearly we aren’t at that point yet.” 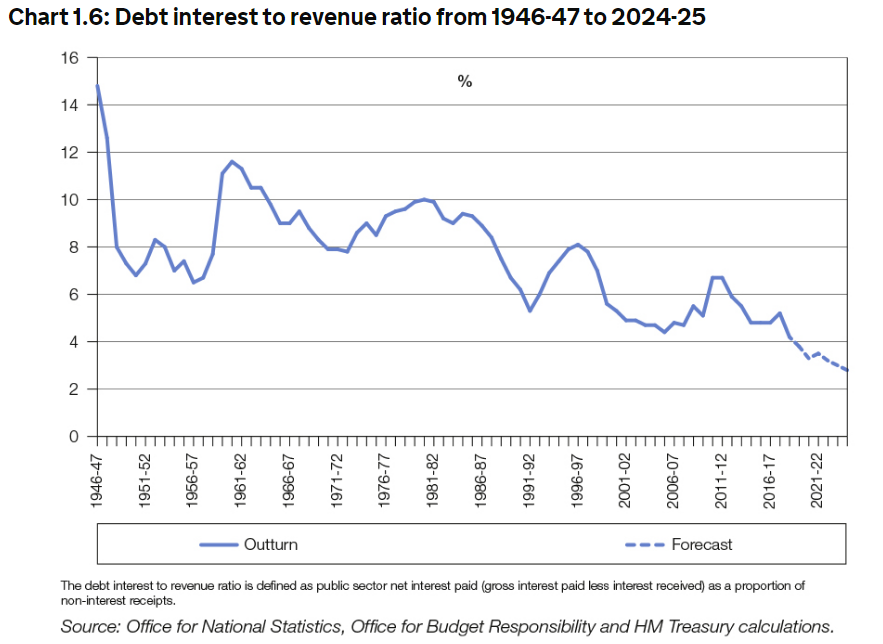 There had been speculation suggesting the government would support the high street by providing vouchers to households to lift spending in a sector of the services dominated economy that has been bedevilled by greater than 50% reductions in footfall across some parts. But no such measures were forthcoming. Instead, the Chancellor rounded off his address to MPs with a hint that either tax rises or austerity could be on the way in Autumn, the last thing anybody except perhaps debt holders will have wanted to hear.

"The Government’s strategy is premised on businesses remaining solvent, but hundreds of thousands of small business owners employing millions of people have received zero support and are on the verge of collapse. For them, the Chancellor’s silence was deafening," says Gina Broadhurst, co-founder of the #ForgottenLtd, a campaign for small limited company directors. "Small businesses have been abandoned by this Government. They have been locked out of Government support. The #ForgottenLtd are not multi-millionaires, they are your local hairdressers, electricians, plumbers and gardeners. They do not have resources to sustain their businesses indefinitely."

Chancellor Sunak said the public finances must be put back onto a sustainable footing and that the debt-to-service ratio should remain below 6%, which means the amount spent on interest cannot rise much past 6% of annual tax revenues that are set to fall sharply amid the pandemic. The UK frequently spends more than £50 billion per year on gross debt interest while Treasury estimated in March that its debt-to-service ratio was around 4% and falling, before saying "if the debt interest to revenue ratio is forecast to remain over 6% for a sustained period, the government will take action to ensure the debt-to-GDP ratio is falling." 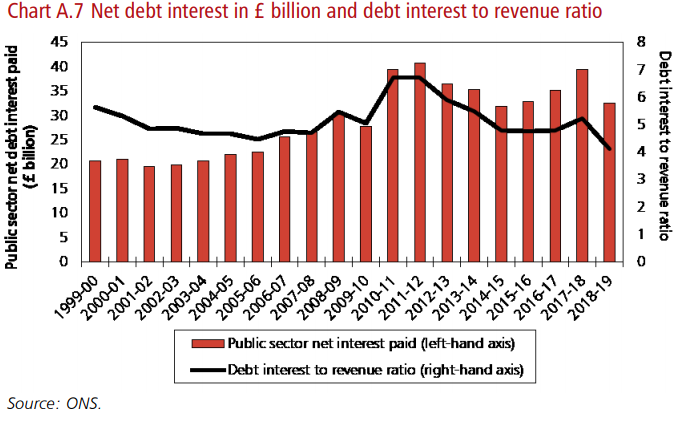 “The cut in VAT for the hospitality and tourism industries were deeper than initially briefed, and provides a template for other sectors should more support be needed in the quarters ahead. The government is gambling on the public to head out and spend, spend, spend in one of the hardest hit sectors to get the economic cycle rebooted. It remains to be seen if businesses will pocket the difference or pass-on the saving to patrons," says Hinesh Patel, a portfolio manager at Quilter Investors. “Sunak also implied tough decisions will come in the Autumn in the form of a spending review."

The UK economy shrank more sharply than many major counterparts are known to have suffered in April amid a comparatively worse virus outbreak that claimed a disproportionate number of lives, which could explain why Sterling was hardly enamoured by HM Treasury's thin gruel on Wednesday. But Sterling hardly suffered either, even after German Chancellor Angela Merkel's repeated assertion the EU must be ready for a 'no deal' Brexit in 2021, underlining the extent to which existing levels may already reflect a generous dose of bad news.

"The pound's reaction to Chancellor Sunak’s fiscal announcement was fairly muted, given that sterling had already front-run the event yesterday (in terms of gains)," says Petr Krpata, chief EMEA strategist for currencies and bonds at ING. "While the size of the stimulus announced is modestly larger than expected, in our view it is not significant enough to prompt further GBP gains. The announced measures today do not significantly alter our UK growth outlook, and with the overriding GBP driver (UK-EU trade negotiations) still looking fairly uncertain, more gains in GBP are unlikely." 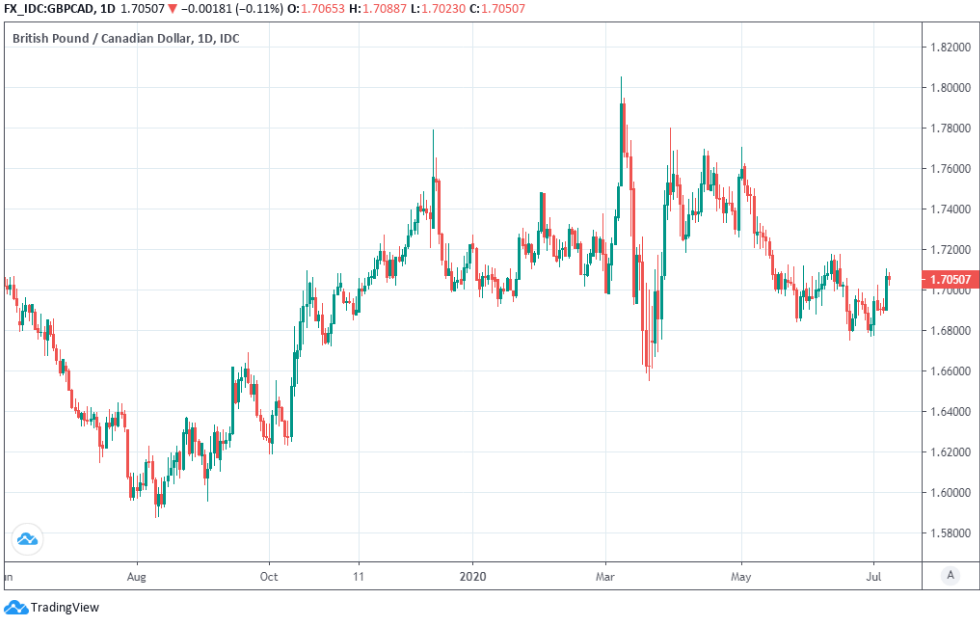 "Reports on this week’s round of Brexit negotiations will continue to drive GBP action from a domestic perspective; PM Johnson reportedly told Merkel that the UK is ready to part ways with the EU without a trade deal lest the latter softens its demands," says Shaun Osborne, chief FX strategist at Scotiabank.

Sterling has repeatedly ignored rhetoric suggesting a default to trading under World Trade Organization terms is nigh in the last week, for which the Pound-to-Canadian Dollar rate has actually risen, indicating the British currency might be forming a base after months of heavy selling. Scotiabank said Monday that more range-trading is likely but that downside risks appear to be lessening.

"While the late June range trade looks set to continue, with trend signals weakening significantly, the GBP managed to close out last week in somewhat bullish manner (outside range higher). We still rather think the GBP has a lot of work to do in order to improve, however, with the 200-day MA at 1.7120 the obvious benchmark test above last week’s high at 1.7025. A higher close on the week last week overall may have eased downside pressure on the GBP in the short run but we look for range trading to persist for now," says Juan Manuel Herrera, a strategist at Scotiabank, in a Monday note. 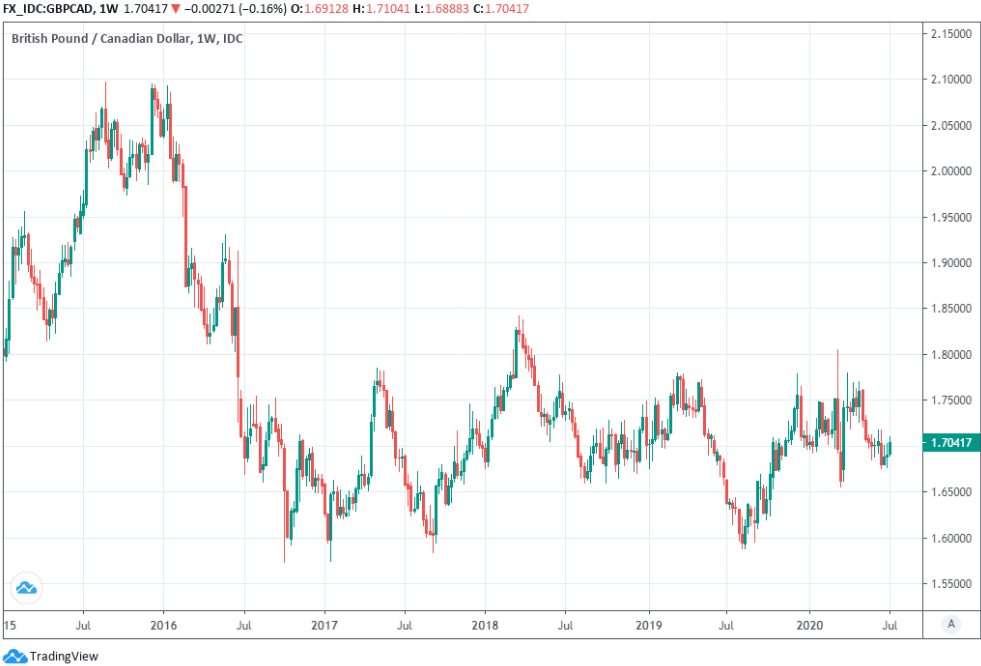