-GBP/CAD inches higher amid relief over extension of Brexit talks.
-Offsetting CAD strength resulting from employment surge in May.
-CA economy added +289.6k jobs Vs expected -500k fall in May.
-Heralds start of job recovery but road ahead is long says RBC.

Pound Sterling was higher against all major currencies ahead of the weekend after UK and EU negotiators agreed to continue trade talks through this month in the hope of making still-absent progress on a range of contentious issues.

Prime Minister Boris Johnson had indicated that he might walk away from the table in June if it seemed unlikely a deal would be ready before year-end so the extension was a modest relief for the Pound, although talks were delayed for a period amid the initial coronavirus outbreak.

Trade talks are still deadlocked however, and remain a live risk to Sterling as the EU continues its pursuit of a neo-colonialist relationship that would not only preserve its influence and control in a range of areas at a time when the British government seeks to end it, but also give it 'competence' in areas like tax where it never had a voice even when the country was an official member. The EU cites the withdrawal agreement and political declaration that was approved by the British parliament in January 2020.

That's the price demanded by Brussels for a free trade agreement equivalent to the one it struck with Canada and a price that was agreed to by now-former Prime Minister Theresa May, who's so-called withdrawal agreement forms the vast body of the document held up by Prime Minister Boris Johnson as a deal of his own in late 2019. Johnson's team said Friday; "the fundamentals of being an independent nation are not a negotiating position."

The Pound-to-Canadian Dollar rate was quoted 0.12% at 1.7035 higher in the noon session but gains were limited by a show-stopping Canadian jobs report that hit the wires at the same time as the American non-farm payrolls report. Canada's economy added back some 289.6k jobs in May when markets were looking for -500k loss. 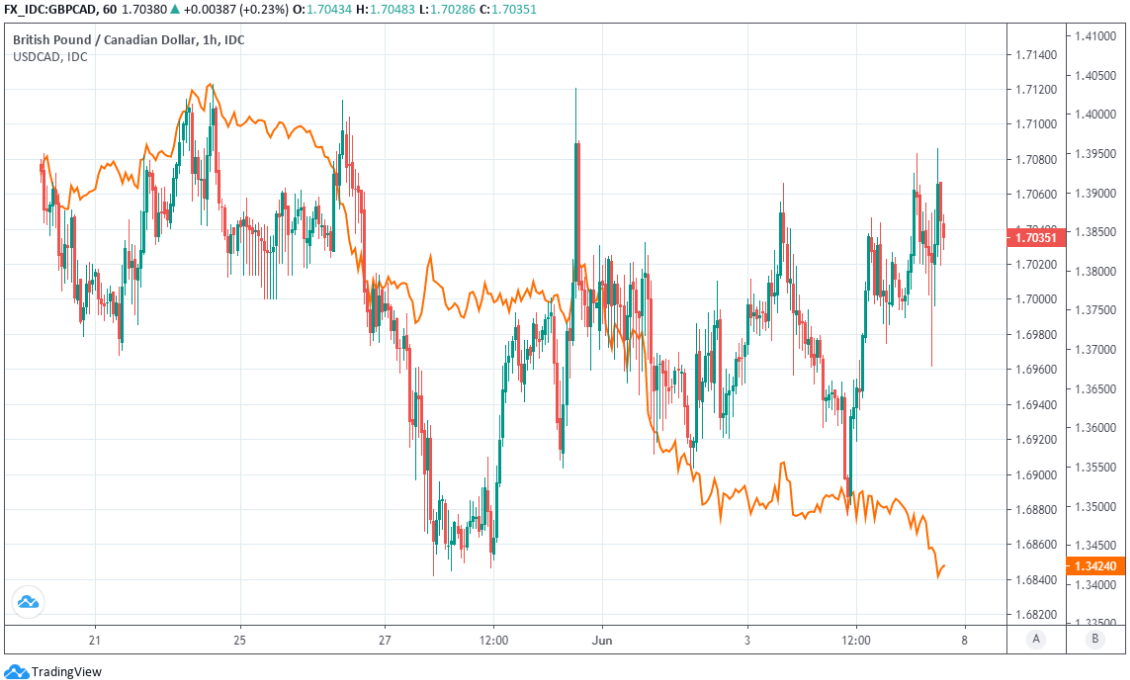 "The gain in employment in May was the largest one-month increase going back to at least the 1960s, but still only retraces about 10% of jobs lost," says Nathan Janzen, a senior economist at RBC Capital Markets. "To be clear, labour markets were still exceptionally soft in May. Employment is still down 2.7 million from February. Those job losses have still been heavily concentrated in lower wage positions (employment for those making an average of $1,200 per week or more was actually up about 300k in May from a year ago). Hours worked are down 23% over the last three months despite a 6% tick higher in May."

Canadian unemployment ticked higher to 13.7% last month, from 13% previously but undershot the consensus expectation for a jobless rate of 15%, which came amid an increase in participation from 59.8% to 61.4%. However, overall job market participation remains below the pre-coronavirus level of 65.5% seen in February and so could rise further in the months ahead, which could mean the jobless number has not yet topped out.

Rising participation means increased numbers of the jobless are telling Statistics Canada that they're unemployed but looking for work, which lifted the official measure of unemployment from artificially low levels in May. Nonetheless, last month marked the beginning of Canada's labour market and economic recovery, even if there is still a long way to go before the economy and job market get back to where they were. If they get back to where they were.

"USDCAD retains a soft technical undertone but USD losses have slowed through the latter part of the week as the market digests the sharp decline in spot seen on Monday. We note that some technical signals are showing signs of stretch—the USD is looking somewhat oversold—but we also note that the underlying bear trend is strongly entrenched on the short/medium term oscillators and the weekly study is poised to tilt more negative for the USD; we think scope for USD rebounds under these circumstances is limited, especially with the market yet to show any clear signs of reversing higher," says Juan Manuel Herrera, a strategist at Scotiabank.

Canada's Dollar has risen against half its major rivals this week although mostly lower-yielders, though Sterling was an exception on Friday after having notched up a modest 0.15% gain over the Loonie. The Pound had suffered four weeks of back-to-back losses against the Canadian Dollar as markets priced in an increasingly noxious cocktail of domestic risks that's since been diluted somewhat by the extension of Brexit trade negotiations.

But Brexit remains a risk and Sterling will also be tested by the Bank of England in June, which is expected to increase its quantitative easing programme but could also reveal more about its newfound interest in negative rates as a policy tool. That could constrain appetite for the British currency and limit any gains for the Pound-to-Canadian Dollar rate. Scotiabank tips 1.78 for the end of June and 1.77 by year-end while other forecasters look for Sterling to hit 1.71 this month ahead of a fall to 1.65 by year-end