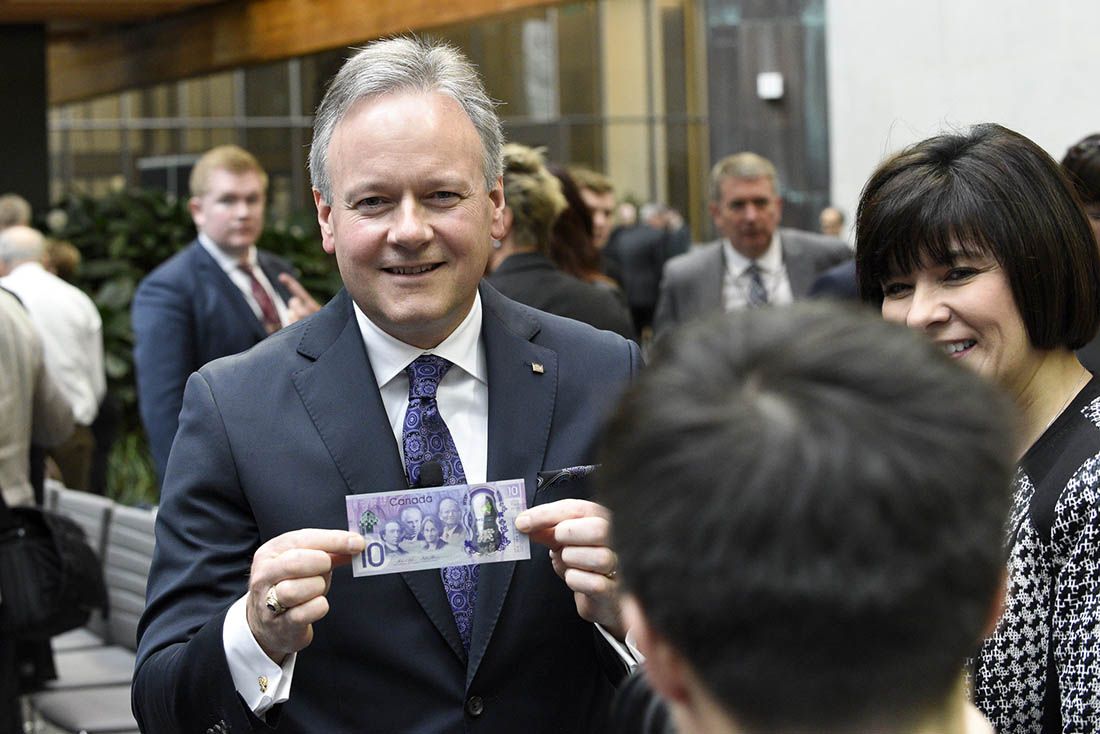 The Canadian Dollar appeared to be unravelling Thursday as it extended an earlier retreat from the U.S. Dollar and Pound after Governor Stephen Poloz said the Bank of Canada (BoC) will cut interest rates again if needed, a day after describing coronavirus a “material negative shock” to the economic outlook.

Governor Stephen Poloz told an audience at a Women in Capital Markets event that downside risks stemming from the spread of coronavirus outweigh risks to financial stability that might stem from lower interest rates, before assuring that the BoC is ready to cut its cash rate further if necessary to support growth and keep inflation on target. The BoC cut its cash rate for the first time since July 2015 on Thursday, taking it down from 1.75% to 1.25%.

The governor also said that negative interest rates "are considered as part of the bank's toolkit" but that they would be an extreme response.

“He did note that "risk management" demands a prompt and sizeable response to larger shocks, which would support our view that we are likely to see a further 50 basis points in total (perhaps in 25 bp increments) as we get evidence of Canadian transmission of the virus. Thereafter, we admit to being in the same degree of uncertainty, as we also "don't know" whether that will persist through the latter half,” says Avery Shenfeld, chief economist at CIBC Capital Markets. 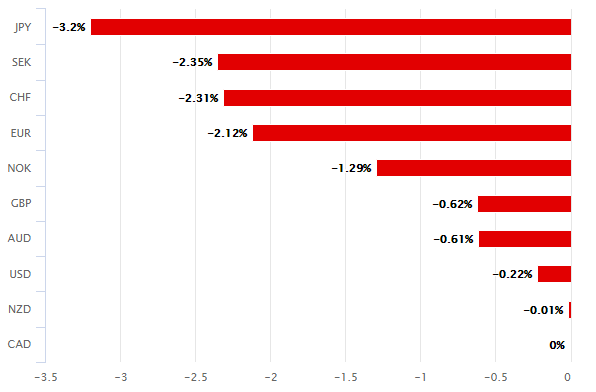 Canada’s Dollar has retreated further from the Pound and U.S. greenback in the wake of the cut, although cratering oil and stock markets had been weighing heavily on the Loonie going into the decision. The Pound-to-Canadian Dollar rate has reclaimed the 1.73 handle after Sterling was boosted by suggestions from the Bank of England (BoE) that it could wait a while before slashing Bank Rate. Strength in USD/CAD and resilience in GBP/USD has conspired to lift the Pound-to-Canadian Dollar rate this week.

"Central banks have been known to sugar-coat bad economic data, on the premise that overt pessimism might hurt confidence. The 4 March Bank of Canada (BoC) Statement following its 50bps policy rate cut made no such effort," says Christopher Graham, an economist at Standard Chartered. "Given the intensity of its concern, we now think the BoC will cut the policy rate at least 50bps in the coming months, most likely via two 25bps cuts at the 15 April and 3 June meetings. Previously, we expected the BoC to cut once in Q1- 2020 and be on hold thereafter. We now see the policy rate at 0.75% at yearend 2020 (1.50% prior). Economic headwinds were already developing in late 2019."

The Canadian Dollar drew significant support in 2019 from a 1.75% cash rate that was rivalled only by that of the Federal Reserve but severe losses for risk assets like oil as well as a steep and ongoing downgrade to global growth forecasts have weighed heavily on the Loonie of late. And although the BoC’s cash rate is still among the highest of the developed world, analysts see it as unlikely to offer much support in a market that’s fretting about a possible coronavirus-induced crunch in the global economy.

“This is a Bank that does not want the CAD to take flight,” says Bipan Rai, North American head of FX strategy at CIBC in a research note sent to clients before Poloz’s speech. “Currently, the market is expecting a 70% chance of a cut at the April meeting. Rate cuts in Canada are not priced in as aggressively as the Fed. This will cause the relationship between front end spreads and USD/CAD to break down further in the near term. If the Fed continues to cut, we suspect the BoC will follow, limiting downside moves in USD/CAD.” 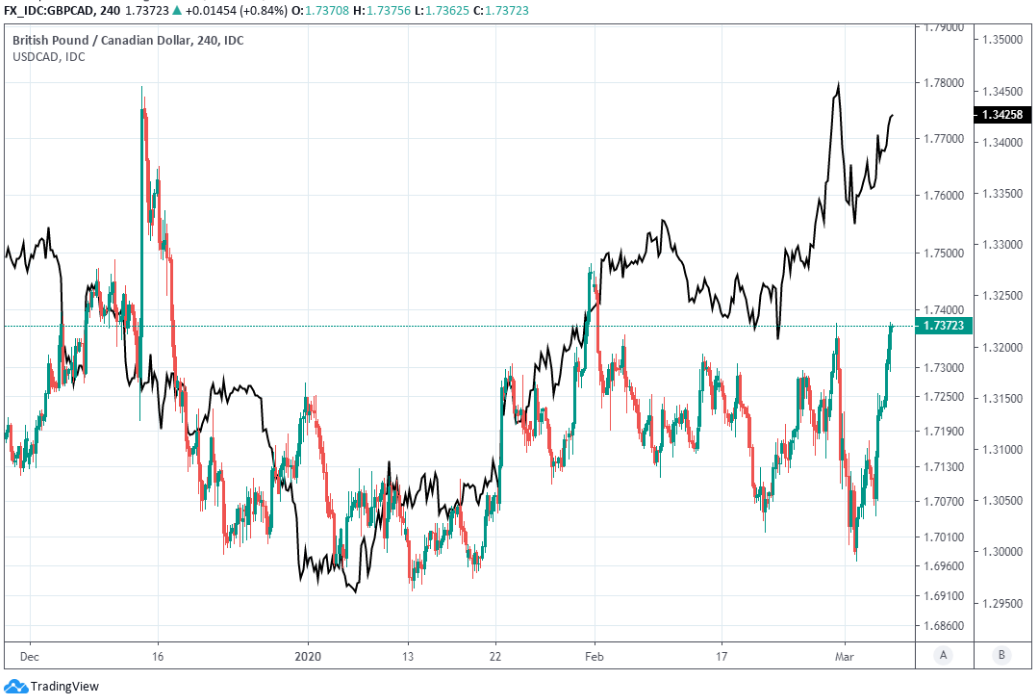 Coronavirus is now spreading in more than 70 countries including the world’s most developed economies and hubs of finance, as well as the world’s poorest and least developed countries.With the epidemic said by governments to be only at its beginning and the prospect of public panic and self-isolation on the rise, the threat to the global economy is growing larger by the day.

That could be bad news for a Canadian Dollar that has a positive relationship with other assets that are effectively proxies for global growth. Three U.S. states had declared states of emergency as of Thursday as the number of domestic coronavirus cases hit 162, with both California and New York states impacted by the viral pneumonia outbreak. The UK, EU neighbours and more than 70 countries in total were also scrambling to contain outbreaks of the virus Thursday. And Canada had 35 cases.

“Markets remain very nervous. Despite the rally in US stocks yesterday, volatility measures remained elevated—suggesting a degree of mistrust about the sustainability of the rebound. Overnight price action has confirmed that caution to some extent, with the mood turning more risk averse,” says Shaun Osborne, chief FX strategist at Scotiabank. “The CAD is soft on the session, leading losses in the G10 space but generally following its other commodity peers.” 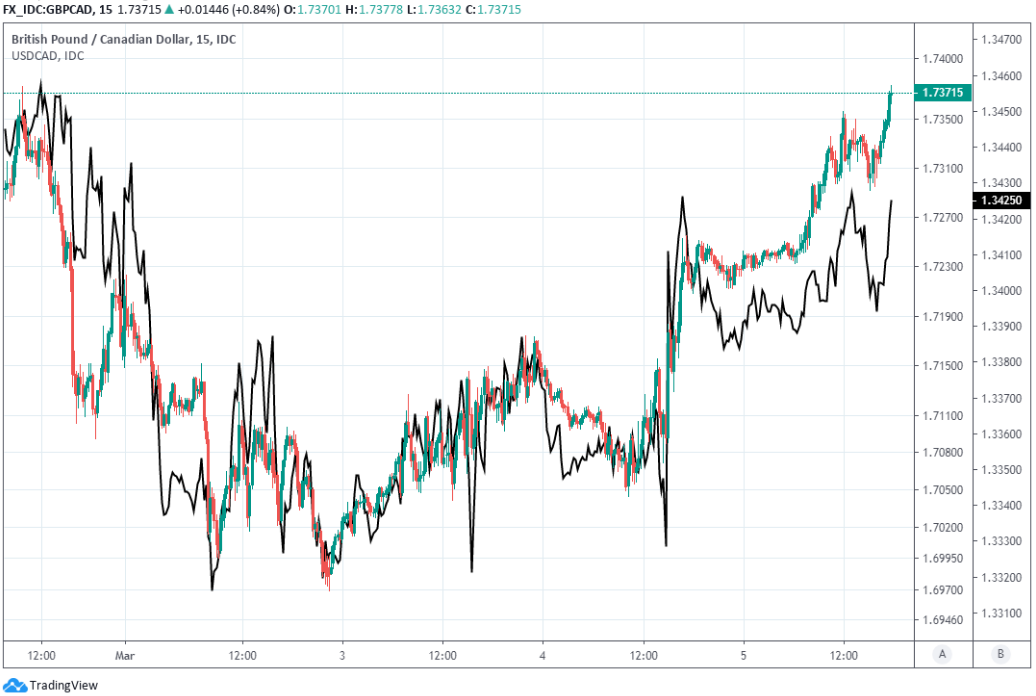 New confirmed coronavirus cases grew faster outside of the four major outbreak centres on Wednesday than they did inside, indicating that the epidemic may be broadening. There were 552 new cases outside of China, South Korea, Italy and Iran on Wednesday, more than double the previous day's 258, according to Pantheon Macroeconomics analysis of data based on government disclosures.

Towns and cities emptied across vast swathes of China when the deadly viral pneumonia disease first took hold of Wuhan, an industrial city in the province of Hubei and a similar scenario can no longer be deemed far-fetched for some of the world's major economies.

"Short-term, we should retest the recent highs in USDCAD, but expect things to settle down around 1.35. CAD still scores cheap on HFFV and sits atop the leader board on our factor-based Macro Ranking Scorecard tool. Risk-off won't help in the short-run, but it's likely to participate in a deeper correction of the broad USD over the coming months," says Mark McCormick, global head of FX strategy at TD Securities.

The Pound-to-Australian Dollar: Melbourne Covid Outbreak no Gamechanger for AUD …