The Pound-to-Canadian Dollar exchange rate retains an upside bias, according to technical analysts, but fresh losses are forecast to blight the British unit before long as investors give it a wide berth again ahead of the next Brexit deadline.

Sterling has held above the technically important 1.71 level this week despite a resilient performance from the Canadian Dollar and for the short-term at least, the GBP/CAD rate is seen retaining an upside bias.

"GBPCAD should gain modestly at least, if today’s performance can be sustained through the close of trade,"says Juan Manuel Herrera, a strategist at Scotiabank in a Monday note to clients.

The pair recovered from support around the 1.7015 level in early Monday trading to reclaim the 1.72 handle and remain close to it through the overnight session and into Tuesday, suggesting the six-month uptrend in the exchange rate remains intact.

Tuesday's price action is just the latest evolution of a week-long consolidation that followed a retreat from 2020's high at 1.6468, which was set in the last days of January when the Candian Dollar weakened notably as markets fixated on the possible risks posed by the coronavirus that's spreading in China. 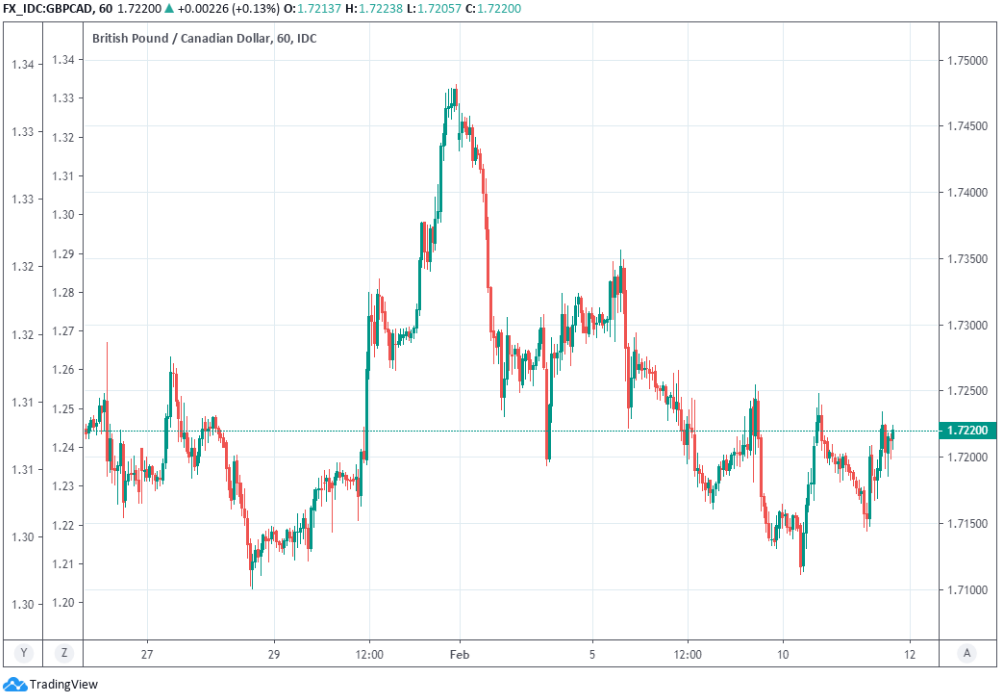 Sterling is expected to continue attempting to retest its 2020 high over the coming days but Scotiabank has warned that "a relapse back under 1.7115 would trigger renewed weakness" that could ultimately take it back to 1.66, a level that's not been seen since early October when a 'no deal' Brexit was still very much an imminent risk.

"Directional impulses are fairly weak, with the GBP trapped in a range around 1.73 while the DMI oscillators are trending towards neutral on the intraday and daily measures. However, the GBP has pushed higher from support defined by the 40-day MA (1.7131 at writing) and we think the low 1.71 zone (1.7115/30) now figures as key support for the pound. A high close today should see gains extend to 1.7400/50," Herrera says.

The Pound has been struggling for weeks to sustain a technical uptrend that was born in summer 2019 when 'no deal' Brexit fears reached fever pitch and the Canadian Dollar was cresting after a months-long rally of its own.

This is after the downward correction from December's post-election highs extended into January and threatened to see the bullish set-up on the charts unravel, until fears over the global economic impact of the coronavirus hurt the Loonie and extended the Pound-to-Canadian Dollar rate a lifeline.

But some forecasters say it's only a matter of time before Sterling exchange rates succumb to fresh Brexit-related losses. 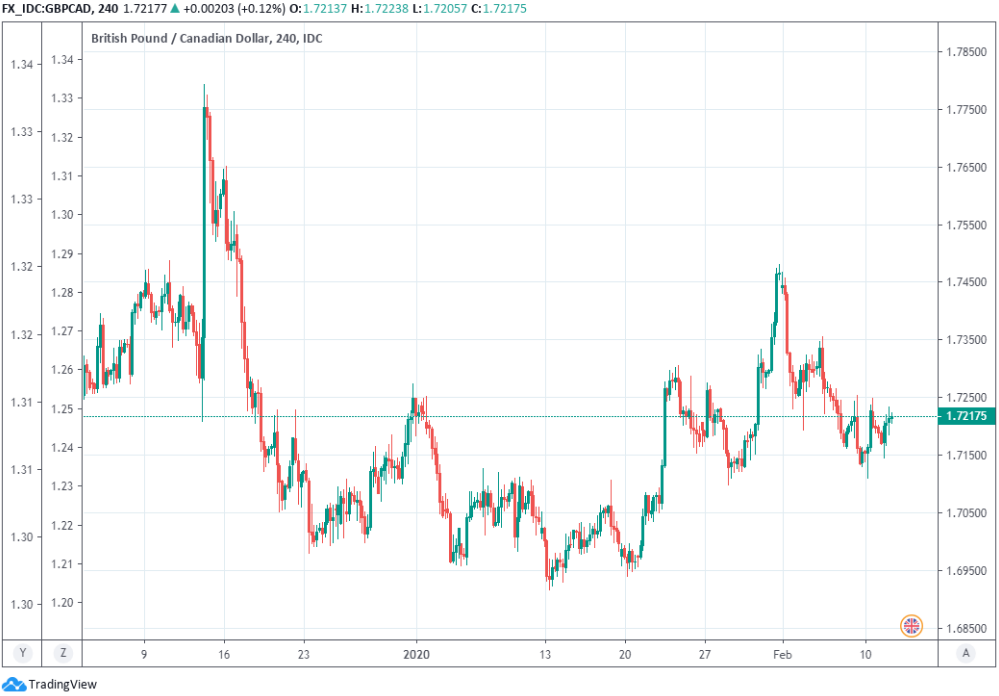 Scotiabank forecasts the Pound-to-Canadian Dollar rate will fall to just 1.70 before the end of March and that it'll average that level through the rest of the year, although others have a more bearish view.

"For the coming three months, the ongoing question will be whether the rebound in demand after the election is strong enough to stop the BoE easing at the May meeting," says Adam Cole, chief FX strategist at RBC Capital Markets. "The next date to focus on is June 30 – the deadline for the UK requesting a transition period extension. Despite the government’s intransigence, there is still some expectation that extension beyond Dec 31 is likely and if that proves not to be the case, expect GBP to react badly."

RBC forecasts the Pound-to-Canadian Dollar rate will fall to 1.69 by the end of March before declining to 1.63 in June and 1.60 in September, which implies losses of up to 7% for an exchange rate that was quoted at 1.72 on Tuesday.

Those forecasts are partly due to uncertainty over the outlook for the economy and Bank of England (BoE) interest rates, but also the result of expectations that a 'no deal' Brexit risk premium will again weigh on the currency as negotiations over the future relationship with the EU get going from March.

Official data revealed faster than expected growth in the UK for the month of December on Tuesday but it remains to be seen if the widely-anticipated post-election 'Boris Bounce' will materialise in the months ahead and prevent the BoE from cutting its cash rate from 0.75% to 0.50%. 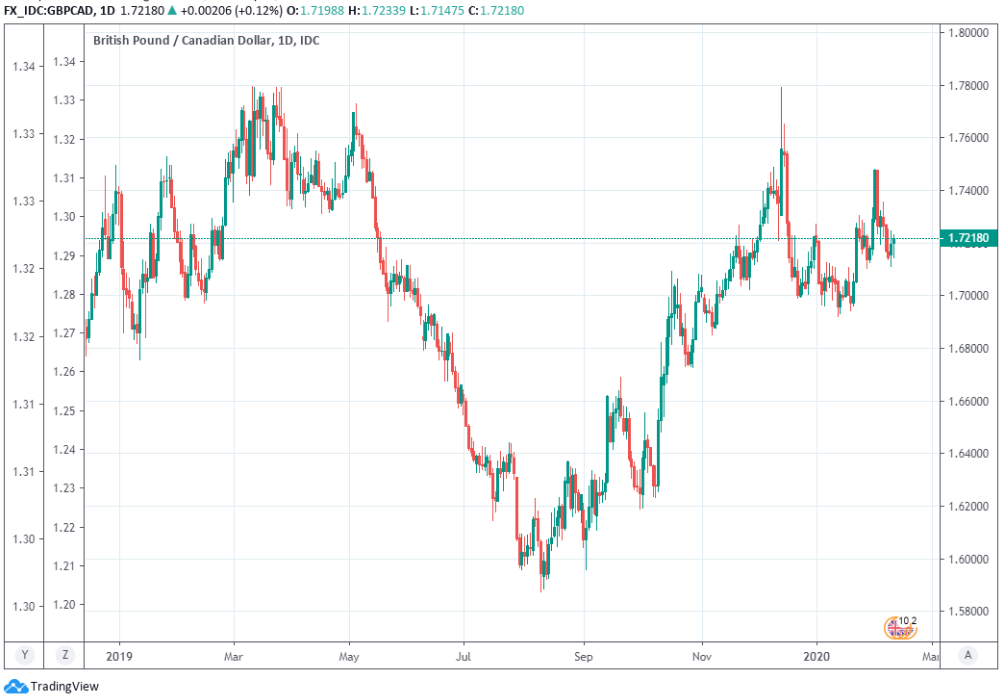 RBC forecasts the Pound will escape a painful interest rate cut this year but that conflicting demands of the two parties to the Brexit negotiations will lead to prolonged uncertainty about a possible 'no deal' Brexit, which was recently termed an 'Australia deal Brexit' by Prime Minister Boris Johnson.

"We have this month revised the whole profile for GBP lower, with the trough against USD and EUR in the autumn of this year. Even the gentle recovery penciled in thereafter leaves forecasts below current spot," Cole says.

The UK left the EU on January 31 but is now in a 'transition period' during which it forfeits representation in the EU institutions in return for a de facto form of membership that lasts either until the end of 2020 or the point when the future relationship is agreed - whichever is sooner.

However, the rub for Sterling is the EU has already stated that it doubts there's enough time for trade arrangements to be agreed ahead of year-end and that it wants an extension of the 'transition period' before any talks have even begun.

And if the British government doesn't request such an extension before an end-June deadline, then the markets would again begin to fear that a 'no deal' exit is becoming likely, which would be sure to see Sterling punished again.

Both sides have already set out their opening positions for the negotiations, beginning with red lines and incompatible demands on each side of the English Channel, which could be problematic for the Pound if concessions are not made by one side or another ahead of year-end. 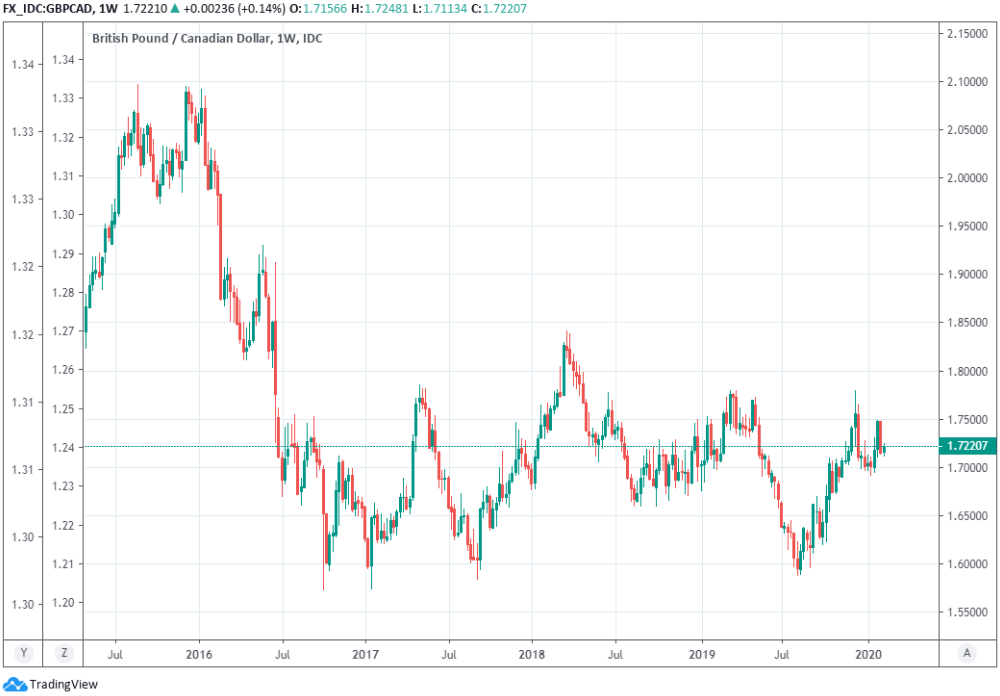