- Oil prices not providing the support they once did

Analysis from Swiss investment bank Credit Suisse shows that the Canadian Dollar is unlikely to receive the support from rising oil prices that might have been the case in the past, and the currency will likely face a dovish correction in the near future.

In a briefing to clients, analyst Shahab Jalinoos says he suspects the Canadian Dollar's performance could prove underwhelming to those expecting appreciation as a result of rising oil prices driven by ongoing tensions in the Middle East.

The focus on the Canadian Dollar's relationship with the oil price has grown over recent days, courtesy to the volatility seen in oil prices stemming from the skirmishes between the U.S. and Iran in the Middle East.

Indeed, "the resurgence in geopolitical pressures in the Middle East has cast the market’s eye on the Canadian loonie as a tradable FX proxy for rising oil prices," says Jalinoos.

"Canadian oil prices have not followed Brent and WTI higher in recent months, in large part due to the transportation bottlenecks that continue to curtail Canada’s access to the global oil market. This leaves us doubtful about CAD’s actual viability as a reliable oil FX proxy, even though we suspect that the market will continue to view it as one regardless," adds Jalinoos. 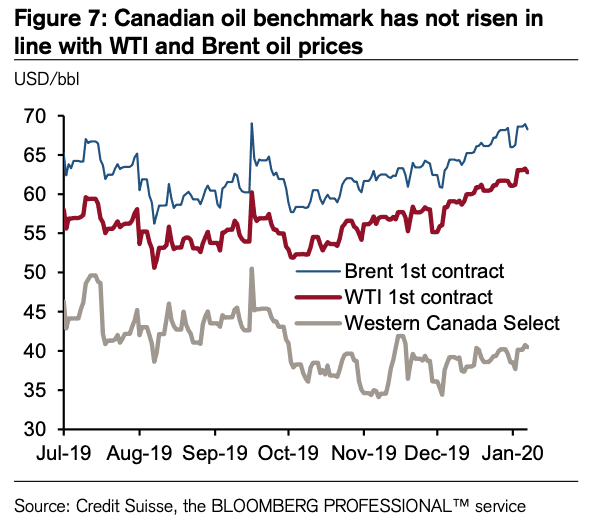 A failing correlation between the Canadian Dollar and oil prices will probably not come as a shock to readers of Pound Sterling Live; back in September 2019 we carried a brief piece detailing research from National Bank of Canada (NBC) suggesting the correlation was breaking down.

The report detailed the Canadian Dollar's response to oil price moves following a drone attack on Saudi Arabian oil facilities and found that the currency is not as highly correlated to the commodity as some had thought, particularly when oil price spikes are driven by geopolitical shocks.

Before the Saudi attack, the last comparable event to the drone attack on Saudi oil fields over the weekend was the invasion of Kuwait by Iraq in 1990, when Iraq subsequently took Kuwait oil production offline.

On that occasion oil prices "doubled over two months," says Sandra Kagango a foreign exchange analyst with NBC's Financial Markets unit; noting that in response the Canadian Dollar appreciated +1.4% in the following 20 days.

But the CAD then depreciated thereafter on the 'risk off' tone adopted by investors as tensions escalated before eventual U.S. intervention in mid-October.

"Production cuts might not be outright bullish for the Loonie, especially if tensions remain high,” says Sandra Kagango a foreign exchange analyst with NBC Financial Markets.

Credit Suisse are to maintain a coy stance on the Canadian Dollar owing to expectations of an economic slowdown in the country.

Jalinoos notes indicators released in the month of December "have shown unequivocal signs of a broad slowdown in Canadian economic activity in late Q4 2019."

Credit Suisse is now on the lookout for the Bank of Canada to signal caution with regards to future monetary policy, and if the BoC turns more 'dovish' in its assessment on the outlook the Canadian Dollar could come under pressure. The broad rule in currency markets is that a curreny will tend to fall when their central bank enters into a rate cut cycle, or hints that that a rate cutting cycle could be coming on the horizon.

"We would look for some corrective strength in USD/CAD from a tactical standpoint, and see potential for a return above 1.31 in the very near-term. Beyond that, we think the uncertainty around the timing of geopolitical tension that we mention in the macro overview limits the potential for large moves in USD/CAD," says Jalinoos.

Time to move your money? Global Reach's best exchange rate guarantee offers you competitive rates and maximises your currency transfer. They offer great rates, tailored transfers, and market insight to help you choose the best times for you to trade. Speaking to a currency specialist helps you to capitalise on positive market shifts and make the most of your money. Find out more here.