- But it's running out of road against the USD, says Scotiabank.

- CAD aided by weak USD and U.S.-China deal into year-end.

- After being lifted by resilient BoC interest rates through 2019.

The Canadian Dollar put in a chequered performance against major rivals in the final session of 2019 Tuesday but remained the best performing major currency of the year, although analysts at Scotiabank say it's now running out of road.

Canada's Dollar was higher against its U.S. rival during the morning session Tuesday but lower against Pound Sterling, although it's risen against both for 2019. The Loonie has gained more than 3% against all major rivals other than Sterling for 2019, against which it has risen 1.49%.

An outperforming economy and a stable 1.75% cash rate at the Bank of Canada (BoC) saw investors flock to the Canadian Dollar this year as other central banks across the globe cut their own benchmarks for borrowing costs in response to a slowdown in the global economy.

USD/CAD has fallen nearly 5% since the start of the year and more than 2% in December amid broad weakness in U.S. Dollar exchange rates, although some analysts say the Loonie will struggle to build further upon this advance.

"CAD remains on solid footing with few signals of a push above 1.31 rebuilding. USDCAD sits around a two month low ahead of what will likely be another quiet trading week until Friday, when Dec US ISM manufacturing figures are released and Fed policymakers return to the speaking circuit," says Shaun Osborne, chief FX strategist at Scotiabank. "USD’s decline may be running out of steam as the currency inches close to its lower Bollinger band (1.3061 currently)." 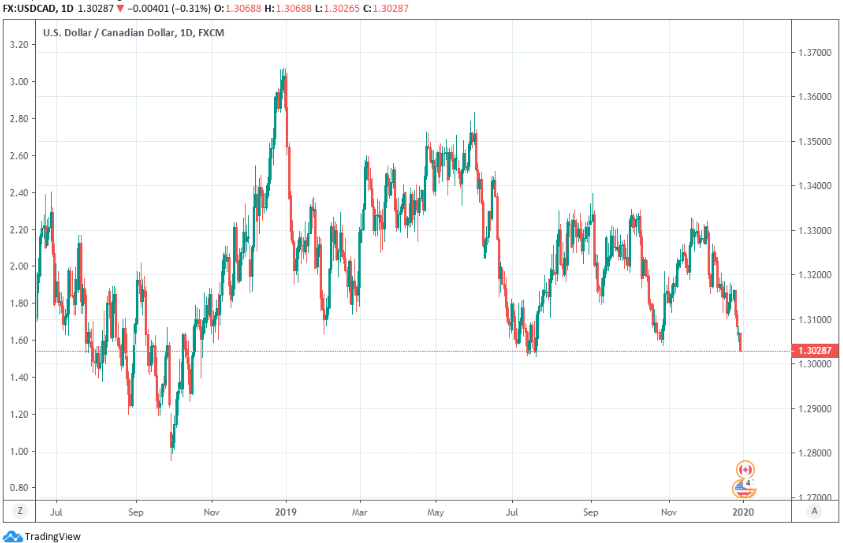 Domestic economic resilience in the face of a global slowdown, and BoC interest rates, have been key to the Loonie's 2019 performance although much of December's gains have come from weakness in the greenback that's resulted from an improvement in the global backdrop.

Vice Premier Lui He will travel to Washington this Saturday to sign the 'phase one deal' agreed between China and the U.S. in October, according to multiple reports attributed to The South China Morning Post. Those reports follow comments from White House trade adviser Peter Navarro on Monday that suggested Washington expects the pact to be signed in the next week, which would be a major win for the global economy as well as Canada's commodity and growth sensitive Dollar.

President Donald Trump first announed the 'phase one deal' on October 11, which has facilitated the final quarter's Canadian Dollar gains. The pact has already averted another volley of U.S. tariffs that were due to hit Chinese exports and the global economy in December although it's also expected to see some earlier punitive levies rolled back too.

"The US dollar has extended its recent slide against the Canadian dollar.  It punched through CAD1.3100 last week and is being pushed below CAD1.3050 today.  The year's low was set in July near CAD1.3015.  The greenback's broad weakness and higher oil/commodity prices may be being exaggerated in these thin markets," says Marc Chandler, chief market analyst at Bannockburn Global Forex. "The Dollar Index is trading heavily today, for the seventh consecutive session. This year's gains have been pared to about 0.4%." 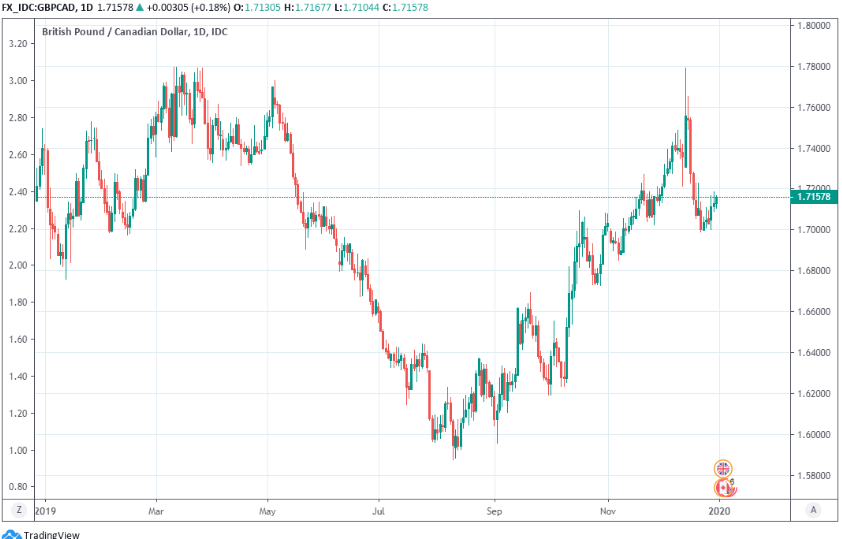 The Canadian Dollar dominated the major currency space this year but has received significant pushback in recent months from Pound Sterling, which reversed earlier losses in Autumn after Prime Minister Boris Johnson agreed terms of the UK's exit from the EU with Brussels and then secured a landslide parliamentary majority in the December election which has all-but guaranteed that his withdrawal agreement will be ratified in January 2020.

However, appetite for the British currency will be tested in the New Year by the next stage of the Brexit negotiations. Prime Minister Boris Johnson has, after all, used the Withdrawal Agreeement Bill to create a new 'no deal' Brexit 'cliff edge' ahead of trade talks with the EU that are expected to begin in February.

The UK is on course to exit the EU on paper at the end of January when it will enter a standstill 'transition period'. The PM will have until the end of June to decide whether or not to extend that period beyond the end of 2020.

European Commission chief Ursula Von der Leyen told French and German press this week that an extension is likely to be necessary, and agreement would be required around mid-year. If that's the EU's opening gambit in the negotiations over the furture relationship then markets might soon fret about a renewed prospect of a 'no deal' Brexit at the end of 2020.

"We have been surprised by how quick the markets have been to readily assume that a sizeable majority would allow the Prime Minister to soften the edges of his Brexit plans. If anything, since the election, the PM has been keen to emphasise that the commitment to leave the transition phase by end-2020 is a manifesto pledge that he intends to adhere to," says Kamal Sharma, a strategist at BofA Global Research. "We are sceptical that GBP is as undervalued as many observers believe."