- Manufacturing slowdown in U.S. to spread

- CAD to weaken against most of the majors in 2020

Analysts at Canadian Imperial Bank of Commerce (CIBC) say they are forecasting a weaker Canadian Dollar in 2020 as U.S. economic growth slows and the Bank of Canada engages in an interest rate cut early in the year.

The Toronto-based lender says "CAD bulls should worry" in 2020, as the U.S. economy's outperformance of the past two years finally comes to end.

Indeed, the Canadian Dollar's story in 2020 will remain one that is linked to the fortunes of the U.S., as has been the case over the past two years which has ultimately driven CAD outperformance. 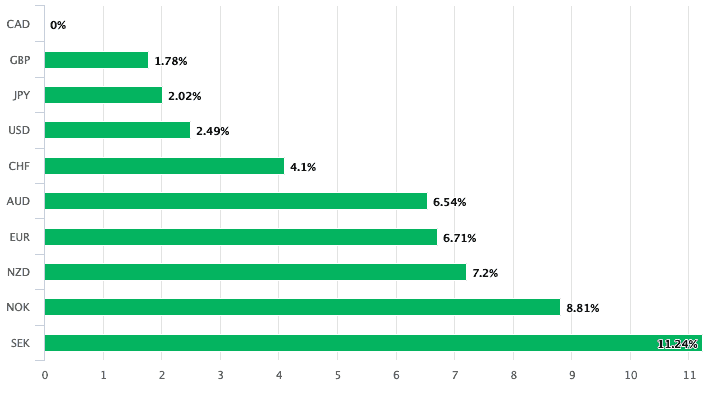 The Canadian Dollar is the best-performing G10 currency of 2019, with CIBC saying the outperformance has largely come courtesy of the strength of the U.S. consumer. President Donald Trump’s tax cuts from 2018 has been identified as having brought growth trends forward via increased consumption, which meant that the CAD benefitted from an improvement in its trade position with the U.S.

But, "it’s going to get a lot tougher for North American currencies," says Jeremy Stretch, an analyst with CIBC.

CIBC see two factors that will likely weigh on the U.S. in 2020, which will in turn have impacts for Canada and Mexico: 1) the slowdown in the U.S. manufacturing sector is lagging the move globally. 2) there are subtle signals that concerns in the manufacturing sector could extend into other important sectors of the U.S. economy including the consumer and service sectors.

"CAD bulls should worry about the first and second reasons highlighted above," says Stretch. "Historically, growth in Canada has been highly correlated to optimism in the U.S. manufacturing sector but this could result in a higher beta if the malaise spreads to the U.S. consumer."

Stretch says the uncertainty with respect to global trade and production matters for CAD sentiment. "Much like the Fed, the Bank of Canada is concerned with respect to the health of the domestic consumer but the degree is a bit higher in Canada given the level of leverage in
the household sector."

CIBC have the Bank of Canada penciled in for a rate cut early next year which is not priced into the market to an appropriate degree.

"That should result in the CAD weakening vs the USD and on the crosses vs most majors," says Stretch.