- Canadian Dollar to be moved by jobs data and oil

The Pound-to-Canadian Dollar exchange rate is trading steady at around 1.6998 at the start of the new week, after rising 1.51% in the week before. Studies of the charts show the pair to be in an established short-term uptrend which has run into tough resistance but will probably overcome it in time and eventually continue rising.

The 4 hour chart - used to determine the short-term outlook, which includes the coming week - shows the pair recovering back up to the October 17 high and into a tough resistance zone standing in the way of further gains. 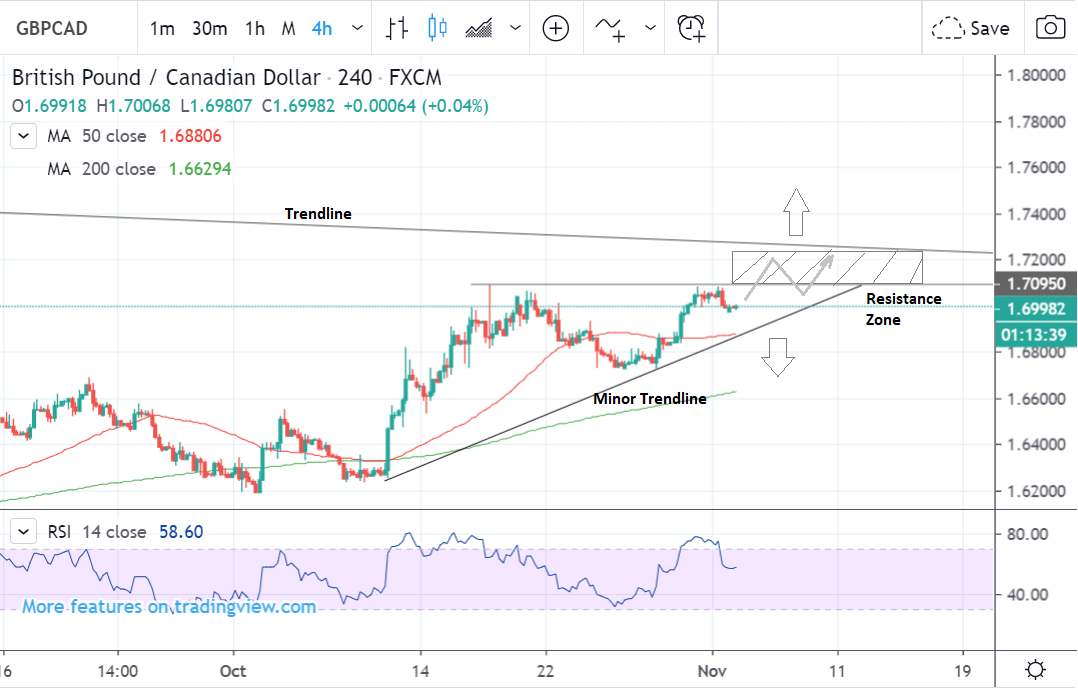 The lack of bullish momentum during the recent recovery suggests the pair may struggle to break higher - the long-term trendline at just below 1.73 and the resistance zone between 1.71-72 are both likely to cap gains.

It is possible the pair may meander sideways at the current level over the short-term before eventually breaking higher.

A move above 1.7300 would provide confirmation of a break above resistance and green-light a bullish continuation into open space.

Alternatively, a break below the minor trendline at 1.6850 would probably turn the tables of the bull trend and signal a reversal lower.

The daily chart shows how the pair has been rising since the August lows but has now reached a major trendline. 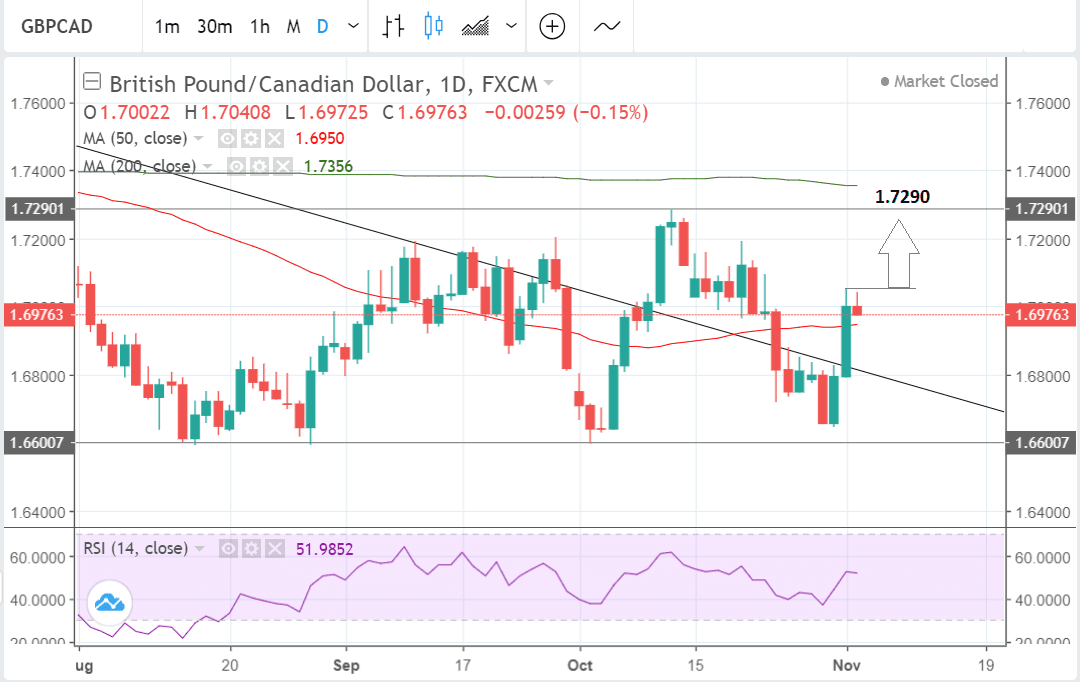 This probably represents a ‘make or break’ moment for the pair. If it can break above the trendline then the way is clear for a continuation higher, if not, then it is at risk of falling back down to the 1.60s again.

The strength of the uptrend as well as the ‘look and feel’ of the charts, in our view, biases the outlook to more upside and an eventual break above the resistance currently sitting directly above price.

A move above 1.7300 would provide confirmation for a continuation up to a target at 1.7400, over the medium-term - possibly even higher.

The weekly chart shows how the pair has risen quite strongly since the August 2019 lows and more recently has encountered resistance from a large moving average (MA) in the 1.69s, which appears to have coincided with the recent pull-back. 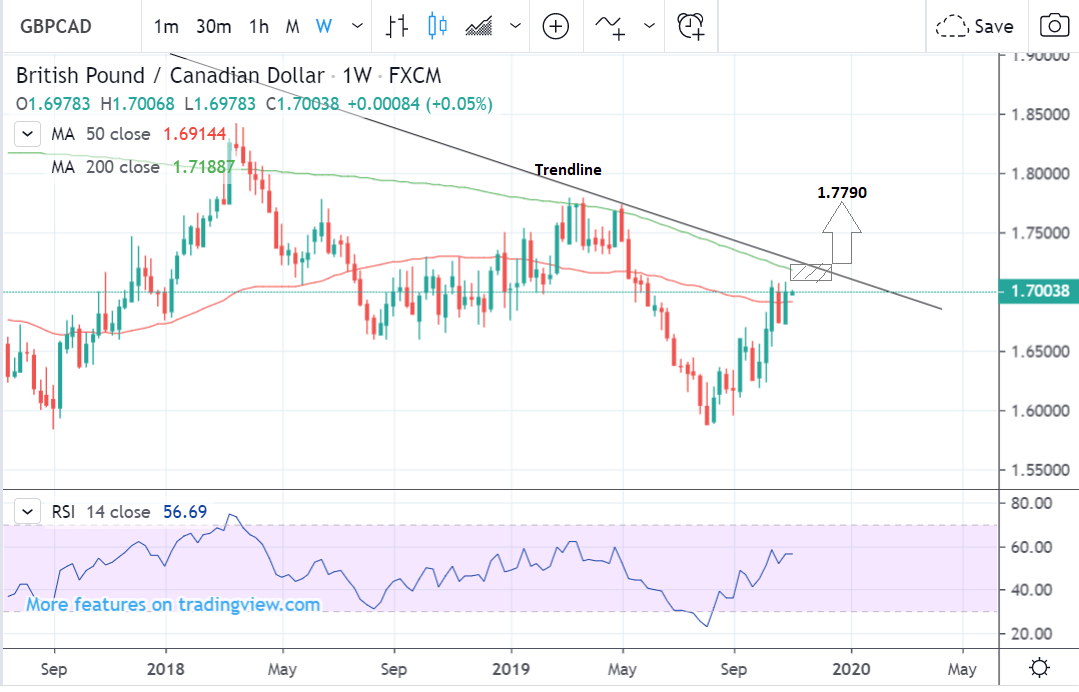 A further impediment lies directly above the exchange rate in the form of the 200-week MA, which is also likely to act as an obstacle to further gains.

A clear break above, and above the trendline, however, would give the uptrend a new lease of life and probably see a continuation evolve higher, to a target at 1.7790.

The main drivers of the Canadian Dollar in the near-term are likely to be jobs data out on Friday and the price of oil, Canada’s primary export.

The Canadian economy is expected to have added 15.9k jobs in October when data is released at 13.30 on Friday.

Expectations for the jobs report are generally positive as many analysts see the data reflecting the boost from employment for the administration of the October general election.

“In Canada, however, following two months of strong job growth, election-related hiring could still support October job gains. Wages should continue to rise at a strong +4% pace,” says Citibank in a briefing to clients.

"TD looks for the labour market to continue its hot streak with the creation of another 25k jobs in October, which should allow the unemployment rate to slip back to the post-crisis low of 5.4%,” says TD Securities, who also forecast average earnings to have risen by 4.4%,” says the bank in a preview note.

Employment data is significant because it is a sign of the health of the Canadian consumer which has become more important since the global slowdown in heavy industry.

The resilience of the consumer has supported growth in the country offsetting any slowdown from the sluggish manufacturing or industrial sector. As long as consumers are spending economic risks are lower.

Yet despite this, the Bank of Canada (BoC) tilted pessimistic in their October meeting statement saying they would be keeping a close watch of consumer-related data, therefore, if employment starts to decline the BoC may make a preemptive interest rate cut to stave off an expected slowdown.

“The BoC expects the resilience of the Canadian economy to be “increasingly tested” by these challenges, and plans to pay close attention to indicators of consumer spending and housing activity for signs that weakness is spreading to the broader economy,” says TD Securities.

Lower interest rates are negative for currency as they reduce foreign capital inflows which lower demand for the local currency. This is because investors prefer higher interest returns on their capital.

The other key driver of the CAD is the price of crude oil because oil is Canada’s largest export.

There is a positive correlation between CAD and Oil prices so when oil goes up or down CAD also often follows.

U.S. crude oil inventories may be critical in this regard when they are released at 15.30 on Wednesday, as well as API weekly crude oil stock is out at 21.30 on Tuesday.

These are both gauges of inventory levels of US crude oil, gasoline and distillates stocks. The figure shows how much oil and product is available in storage. The indicator gives an overview of US petroleum demand.

The overall price of oil may be a little high as it does not reflect the real geopolitical risks which exist, according to Ben Van Beurden, the CEO of Shell, suggesting the price could be at risk of declining.

“The market is a little bit anaesthetised to trade wars and the glut of shale and everything else to the point where it has become blasé about geopolitical risk and I think that it is not representative of the real picture,” says Van Beurden in an interview with Bloomberg News.