- Uptrend since August biased to extend

- Canadian Dollar to me moved by election and retail sales

The Pound-to-Canadian Dollar rate is trading at around 1.7014 at the start of the new week after rising 2.07% in the week before. The pair is now looking to be rising within an established uptrend and the bias is for further advances, but some hefty resistance must first be overcome.

The 4 hour chart - used to determine the short-term outlook, which includes the coming week - shows how the pair has been rising since the start of October. 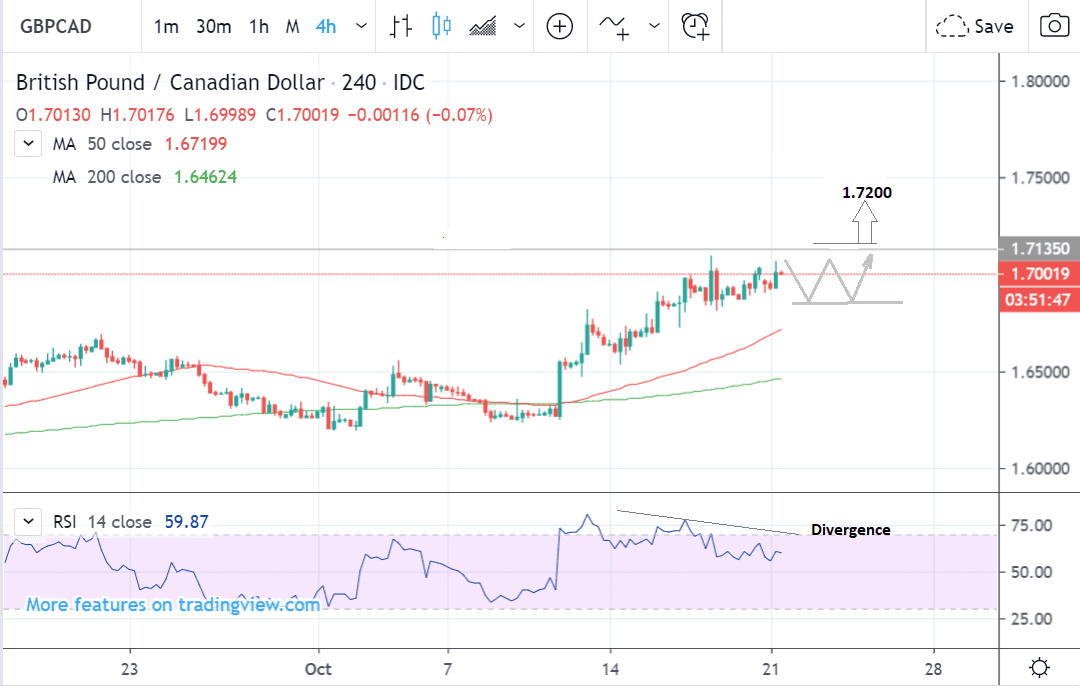 The trend is strong and probably biased to continue but it has now reached some key highs which have slowed its ascent.

The RSI momentum indicator is diverging with price - which means it is falling whilst price is rising - and this is a bearish sign which indicates a risk of a pull-back.

At the same time, if the pair can successfully break to new highs or above the 1.7140 level it will provide confirmation for a continuation of the uptrend to the next target at 1.7200.

The daily chart shows the bigger picture and how the uptrend which started at the August lows is evolving. 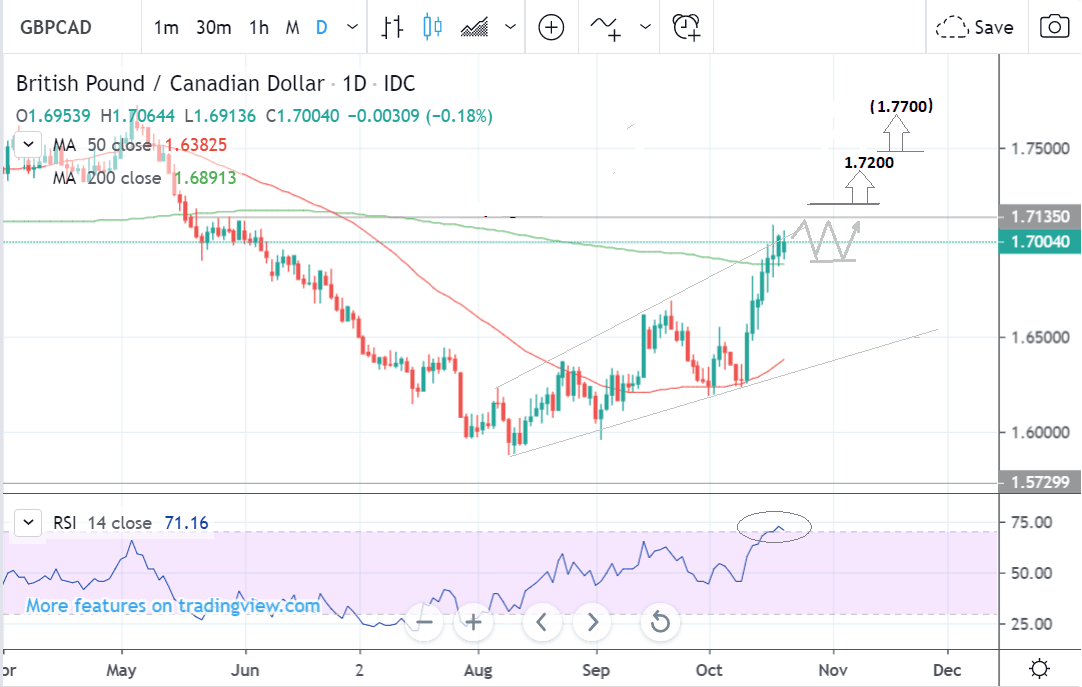 This bull trend has successfully broken above the 200-day moving average (MA) which is a bullish sign and more recently has tipped some key highs at 1.7135 and stalled.

Momentum, as measured by RSI, is in the overbought zone above 70, heightening the risk of a pullback and sideways trend evolving, with corrections probably finding a solid floor at circa 1.6900.

At the same time, the strong uptrend is biased to extending and a break above 1.7275 would see the next stage of the uptrend evolve up to a possible target at 1.7700.

The weekly chart shows how the relatively new uptrend from the August lows broke above the 50-week moving average (MA) and is now moving up towards the 200-week MA. 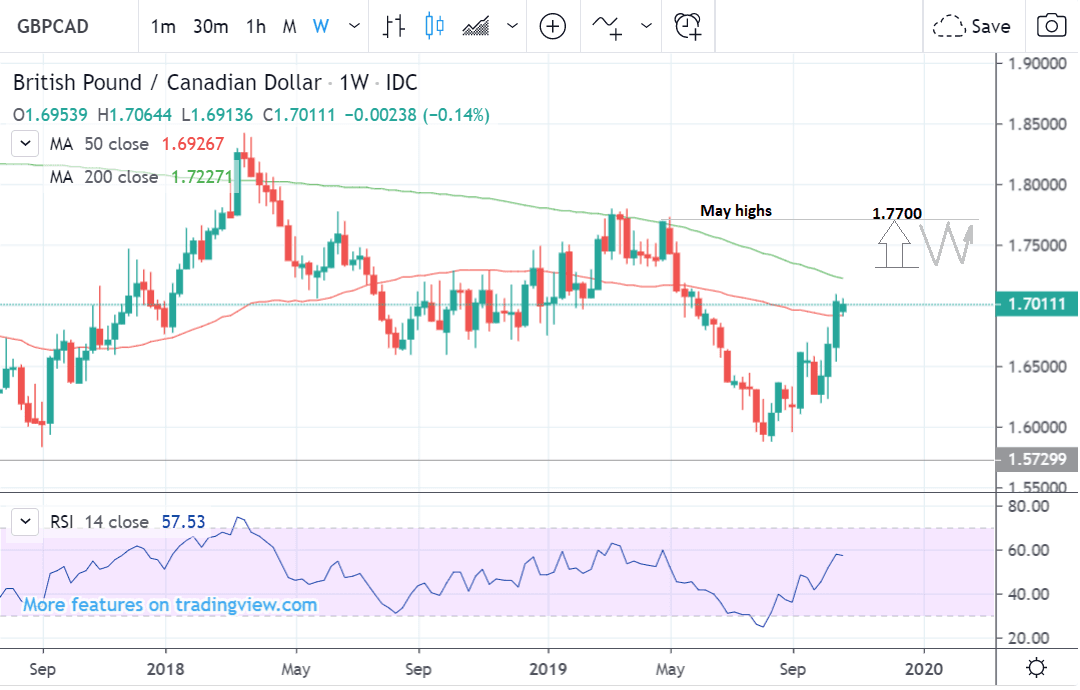 The 200-week at 1.7235 is likely to present a tough ceiling capping further upside and the uptrend may struggle to climb much higher.

The pair will probably eventually break above the 200-day and then move up to the 1.7700 target if the bull trend continues.

At that level, it is likely to pause since it is a key high. There is a risk it could then enter a sideways trend for a while at around, or just below, the 1.7700 level.

The main drivers of the Canadian Dollar in the near-term are election risk tonight (Monday) and this week’s big release, retail sales on Tuesday.

Election risk may be limiting Canadian Dollar upside because investors may be holding back until after the election to make their allocations.

There is arguably actually a risk that CAD could appreciate once the election results are in, regardless of the result, since it will lift uncertainty, the real bugbear for CAD.

Both the two leading parties - Justin Trudeau’s Liberals and the Conservatives - are market-friendly, so there is no big premium attached to one or other winning.

Trudeau’s record on the economy since taking office in 2015 is pretty much faultless, with exceptional above-peer and trend growth recorded since then.

Neither of the two leading parties is likely to have an all-out majority so how the coalition politics unfolds could affect markets.

There is a potential for this to reignite uncertainty again depending on the outcome as it could lead to market unfriendly policies from coalition parties being thrown into the mix.

Retail sales are likely to rise on Tuesday because of strong car sales, which is a positive sign for the economy, since it is often auto-sales which are one of the first sectors hit during a protracted slowdown.

“Retail sales are forecast to rise by 0.6% in August on another sizeable pickup in motor vehicle sales, leaving the ex-auto figure little changed for a second consecutive month,” says TD Securities, a Canadian-based investment bank.

Assuming a figure in line with 0.6% expectations or higher CAD should remain supported or even perhaps rise.

The overall backdrop for the Canadian Dollar remains positive as the economy shows resilience in the face of the global slowdown.

Manufacturing remains elevated and relatively robust compared to most other developed countries but some analysts are sceptical this will last and see dark clouds on the horizon.

“Despite improved (manufacturing) sales, the fly in the ointment in the report was a still-elevated inventory/sales ratio at 1.54. Without an acceleration in sales growth, this presents downside risk to future production growth,” says TD Securities. 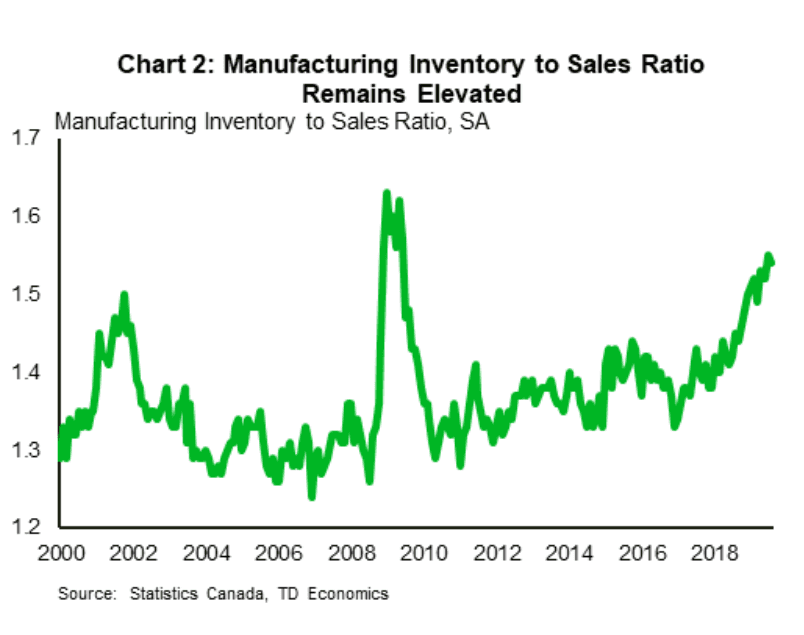 On point inflation data has added to the supportive backdrop. It means the Bank of Canada (BOC) is even less likely to cut interest rates in order to help stimulate the economy than it was before. If this is the case it will stand out from the rest of G10 central banks as one of the few which have not had to ease in 2019.

This is benign for CAD since lower relative interest rates tend to weigh on a currency because they reduce foreign capital inflows due to investors preferring jurisdictions offering better returns.

Some, however, are questioning how long the run of BOC exceptionalism will last. 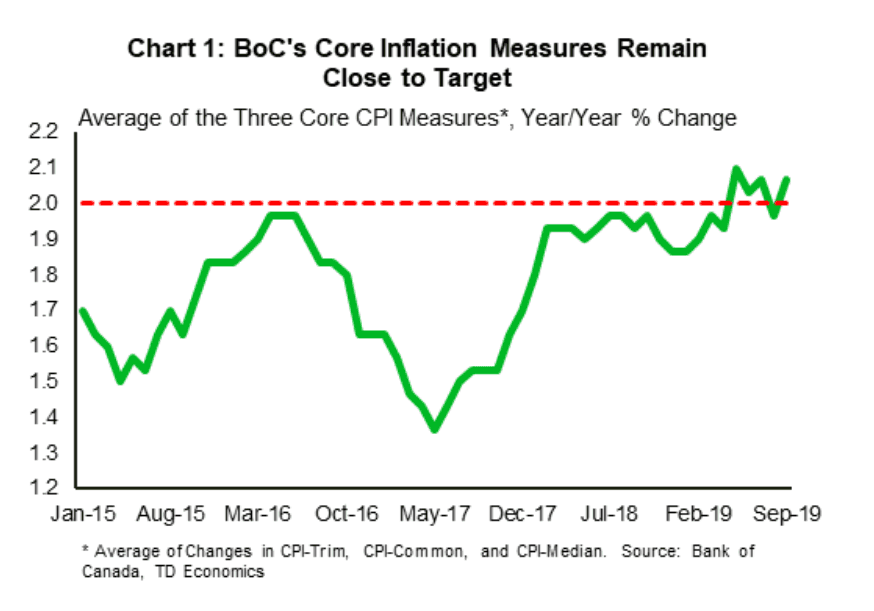 “The stability of inflation measures and persistent strength in labour markets are likely to keep the central bank on the sidelines in its meeting later this month,” says TD Securities. “However, trade tensions and the ongoing global manufacturing downturn cloud the outlook for exports and business investment, likely to result in future insurance cuts.”