- Canadian Dollar to me moved by inflation data

The Pound-to-Canadian Dollar exchange rate is trading at around 1.6695 at the start of the new week after rising 1.67% in the week before. The pair is now looking to be in an established uptrend which could extend if it can successfully break through tough resistance situated not far above the current market level.

The Pound is expected to remain volatile this week as Brexit negotiations with the EU reach their day of reckoning; by Thursday we will know if the EU and UK are able to strike a revised deal. This deal should then be put before the House of Commons on Saturday.

If the deal should fail at either of these two stages Sterling will be at risk of declines against the Canadian Dollar. However, the successful passing of a deal opens up Sterling to further gains, which will likely reinforce GBP/CAD's technical uptrend.

The 4 hour chart - used to determine the short-term outlook, which includes the coming week or next 5 days - shows how the pair based and then rose significantly higher on October 10 and 11. 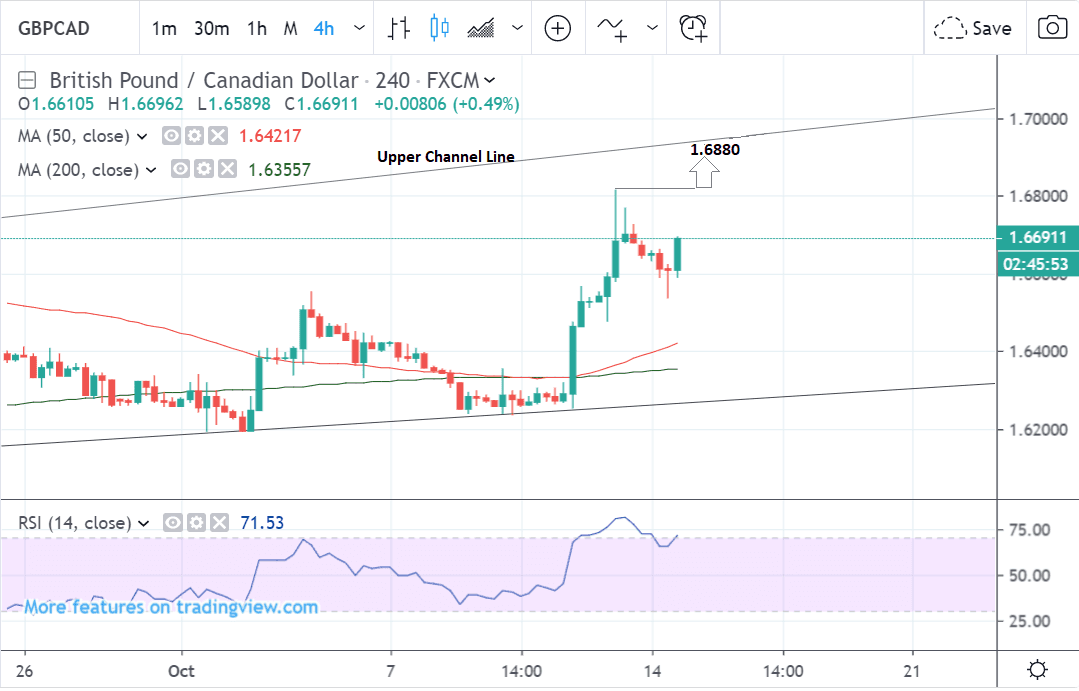 The strong move higher suggests the short-term uptrend has resumed. Given ‘the trend is your friend’ it could continue up to the upper channel line at around 1.6880.

A break above the 1.6820 October 11 highs would provide added confirmation of a continuation higher.

The daily chart clearly shows the evolution of the new short-term uptrend which began at the August lows. 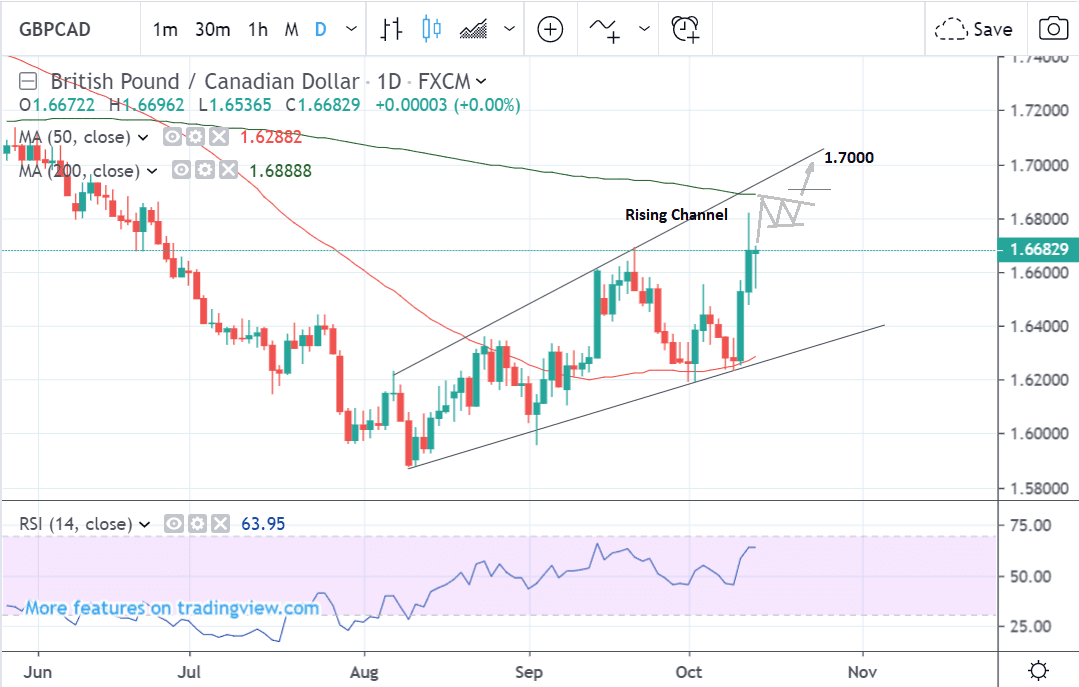 Such a move, however, would be dependent on a clear break above the 200-day MA confirmed by a move above 1.6920.

The weekly chart shows the young uptrend from the August lows is reaching resistance from the 50 and 200 week moving averages (MA) between 1.69 and 1.72 respectively. 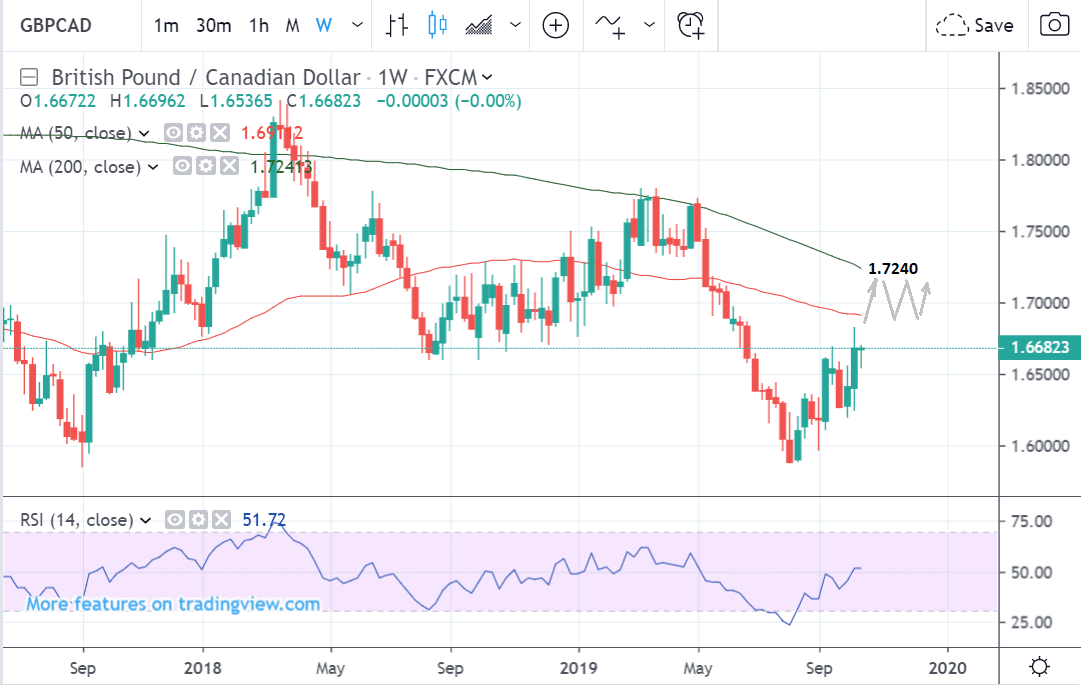 These MAs are likely to present a tough ceiling capping further upside and the uptrend may struggle to climb much higher.

That said, the pair should probably reach the 200-day at 1.7240 over the long-term, yet after that, it may well pull-back and go sideways either before or after touching that level.

The main drivers of the Canadian Dollar in the week ahead are inflation data, manufacturing sales, and Chinese growth data.

The result continues to underscore the characteristic robustness of the Canadian economy - a strength which has underpinned the currency well versus its G10 counterparts over the last year.

The trend may well continue in the week ahead when Canadian inflation data is released on Wednesday at 13.30 and forecast to show a 2.1% rise in September, after showing a 1.9% rise in August.

Both results are at around the target rate of 2.0% and suggest an economy puttering along fairly well. It also means the central bank will probably not be in any hurry to cut interest rates - unlike in most other countries.

Relatively higher interest rates are a major driver of the currency strength so CAD is on course to outperform other FX if its CPI is in line with or better than estimates.

Manufacturing sales are forecast to show a 0.6% uptick in August when the figures are released at 13.30 on Thursday, easily beating the -1.3% of the previous month.

Canadian manufacturing has remained relatively immune to the broad-based decline suffered by the sector since the start of the U.S -China trade war.

It has only recently started to show softer prints and manufacturing sales will provide further insight on how the sector is holding up amidst the global hammering it is taking: a better-than-expected result would be surprising and might support CAD.

Chinese GDP data at the end of the week could impact the Canadian Dollar as it is so pivotal to the global growth and the price of oil which is another factor for CAD, as a whole.

Chinese Q3 GDP is forecast to show a rise of 6.1% year-on-year compared to a year ago, when released on Friday, at 3.00.

This would represent a slowdown from the 6.2% of the previous quarter. Any deeper contraction would raise concerns about the Chinese economy which might have a marginal effect on CAD.

The data will probably, however, be viewed in a more benign light as a result of the recent trade agreement between the U.S. and China, which saw the U.S. hold back from imposing higher tariffs on $250bn of Chinese imports in exchange for China lifting a ban on importing U.S. agricultural products.

Yet even this deal could be in doubt according to analysts, who say there remains a risk one or other of the two signatories have a last-minute change of heart.

The China Daily newspaper, for example, wrote as follows: “while the negotiations do appear to have produced a fundamental understanding on the key issues and the broader benefits of friendly relations, the Champagne should probably be kept on ice, at least until the two presidents put pen to paper.”

In the U.S. even secretary of state for the treasury Steve Mnuchin showed caution, warning China that, “I have every expectation if there’s not a deal those tariffs would go in place,” referring to the next round of tariffs scheduled to mid-December.