- Losses ahead of last six elections have averaged 3.3% says BMO.

- But "competitiveness" discussion presents two way risks for the CAD.

The Canadian Dollar could soften over the coming weeks as investors turn their attention to the looming general election set for late October, with the various policy platforms as well as the ebb and flow of opinion polls now likely to have an impact on Loonie exchange rates, some local analysts say.

Canada's Dollar has risen almost 1.5% against its U.S. rival in the last week and almost 1% against Pound Sterling, which might make it especially sensitive to political uncertainty in Ottawa up ahead. BMO Capital Markets says Canadian losses ahead of the last six general elections have been worth an average of 3.3% in the USD/CAD rate.

"We do think that election hedging is probably less skewed toward USDCAD buying in 2019 than it has been in previous Canadian elections held this century," says Greg Anderson, head of FX strategy at BMO Capital Markets. "With that caveat, we point out that USDCAD has risen by 3.3%, on average, over the 4M period leading up to the six Canadian elections of this century. "We don't put a ton of stock in election hedging as a factor, but we do think that it is probably worth 1-2% of USDCAD upside."

Anderson and the BMO team say international investors are likely to want to protect themselves against losses on their Canadian Dollar holdings ahead of the vote, although the process involved with doing that could itself lead the currency to fall over the coming weeks. Such investors would have to bet on a decline in the Loonie in order to insure themselves against losses, because the profits from doing so would offset the reduction in value of assets parked in Canada if the exchange rate falls. 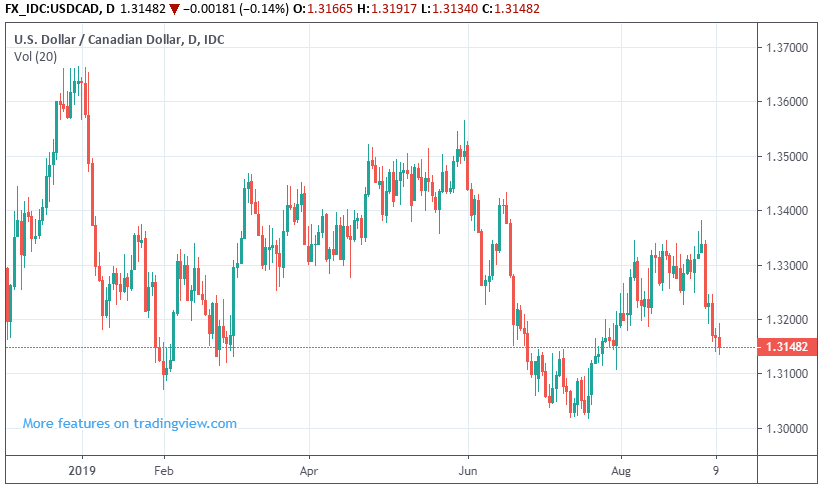 "The right policy prescription could have more impact on USDCAD than the aforementioned hedging pressure. As a consequence, we think that election risk is potentially two-sided. At a minimum, market participants will need to remain engaged throughout the debates," Anderson says. "The average of the 13 surveys taken in August had the Liberal Party (led by PM Justin Trudeau) 0.1% ahead of the Conservative Party (led by Andrew Scheer)."

Betting on a decline in the Loonie would increase the supply of currency on the market and lead the Canadian Dollar to fall if done en masse by commercial firms and financial institutions, But BMO says the directional risks are two-sided this time around given the likely focus on the "competitiveness" in the debates leading up to the vote.

Limited infrastructure to support the sale of oil onto global markets outside the U.S. and a host of other policy issues have in recent times had economists fretting about whether Canadian goods and services exports will be able to compete effectively on the global market in the years ahead.

And the strength of the Canadian Dollar in 2019 has only served to fuel those concerns in recent months, because a higher exchange rate makes goods and services more expensive for overseas customers to buy. 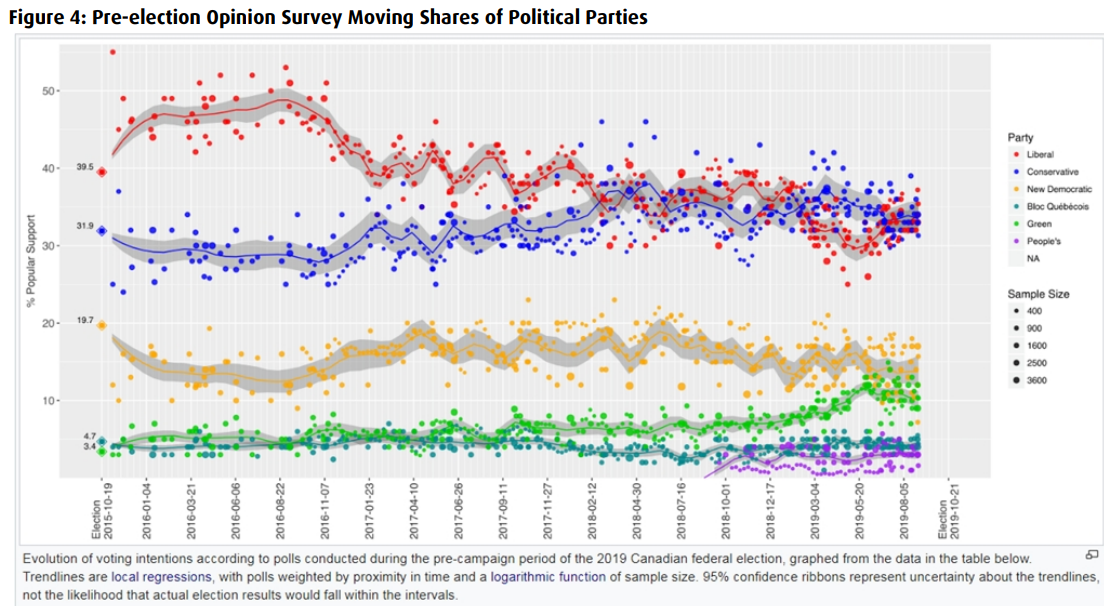 Above: BMO map of changes in voting preferences, sourced from Wikipedia under CC licensing.

"Criticism, along with a tight race, may prompt Scheer to detail a form of 'competitiveness plan' in the debates," Anderson writes, in a npte to BMO clients. "We don't pretend to have inside information on Scheer's strategy; we simply note that it is a possibility that he unleashes CAD-positive policy proposals over the next few weeks. With his probability of winning the election at roughly 50%, a proposal that markets deem as having 5% downside impact on USDCAD should in theory move the pair about 2.5%."

The debates among leaders of Canada's various parties kick off this Thursday at 20:00 local time, with a second discussion set to follow on October 01, although incumbent Prime Minister Justin Trudeau will not begin participating in them until October 02. Trudeau is said to be planning to participate in three televised debates ahead of the actual vote, which is scheduled to take place "on or before" Monday, October 21.

October's election could have significant implications for the Canadian Dollar if it results in a change of government and associated shift in economic policy, which will come around the same time the markets see the Bank of Canada (BoC) setting itself up for the first interest rate cut since the commodity price collapse of 2014-2016. The vote will also take place during what will be an important quarter for the global economic outlook.

"From the trading desk we see a disconnect between the underlying economic fundamentals that remain sound in north and south of the 49th parallel and the risk aversion noise in the global system. Themes in G10 foreign exchange are non-existent with the exception of central bank dovishness. The BOC has been more sanguine and delivered a more balanced statement which will continue to bore at the midpoint of the year’s 4% range," says David Piscatelli, a trader at CIBC Capital Markets. "The desk sees resistance coming in at 1.3475 -1.3625 and are reluctant to get overly excited as 1.3000 has become a major support level that is not likely to be breached."

CIBC's currency strategy team has advocated that clients of the bank bet on an increase in the USD/CAD rate upon moves back toward the 1.32 level and target a move up to the 1.35-1.36 area in the months ahead, while Piscatelli and others on the trading desk are confident the 1.30 threshold in the exchange rate will not be crossed over. A part of their rationale is centered on Bank of Canada interest rate policy and the earlier-referenced concerns about 'competitiveness' and strength in the exchange rate.

The Loonie is the best performer of the top 10 developed world currencies this year because the BoC has done little to suggest it will follow the U.S. Federal Reserve and other central banks in slashing interest rates over the coming months. This has seen Canadian yields, which represent the returns earned by investors in the local bond market, demonstrate resilience in the face of a sustained march lower by global peers. This has boosted the attractiveness of the Loonie in the eyes of investors.

"The CAD has outperformed versus competitor currencies since July. Given the concern around net exports going forward, the Bank is unlikely to sit on the sidelines and remain neutral for long," says Bipan Rai, head of FX strategy at CIBC. "We side with our economics team and expect that December is the more likely date to ease than October. USD/CAD view: We still like buying dips. Particularly if price action gets back toward the 1.3200 handle."

BMO and CIBC are tipping the prospect of a lurch higher in the USD/CAD rate over the coming weeks, which could mean the Pound-to-Canadian-Dollar rate also continues to move higher. This is especially the case now markets have rediscovered an appetite for the British currency in the wake of the parliament successfully hijacking control of the legislative agenda and passing a law requiring the Prime Minister to effectively abandon government Brexit policy and request another delay to the UK's EU departure. 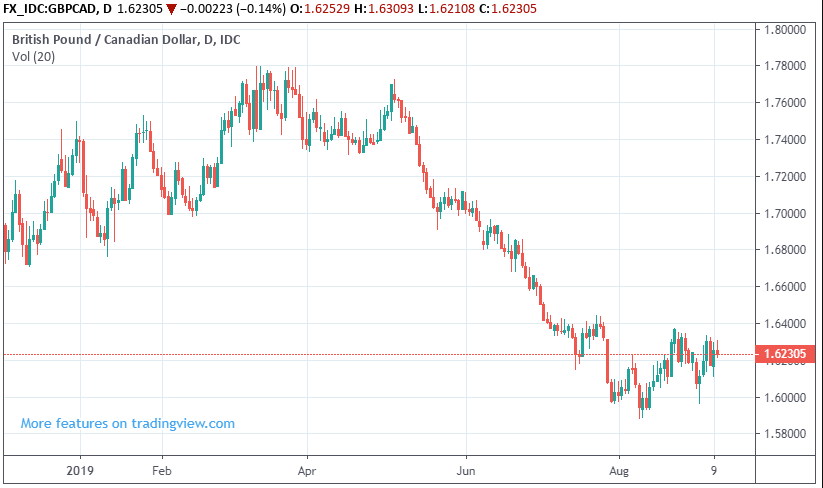