- GBP/CAD appearing to base and mount recovery

- Sterling moved by Brexit and Canadian Dollar by oil

The GBP/CAD exchange rate is trading at around 1.6153 at the start of the new week after falling a marginal -0.05% in the previous week. Despite declining overall, the charts are constructive and suggest the pair will probably move higher in the week ahead.

The 4 hour chart - used to determine the short-term outlook, which includes the coming week or next 5 days - shows how the pair has been rising since the August 9 lows, which probably marked a key bottom from which further upside is likely. 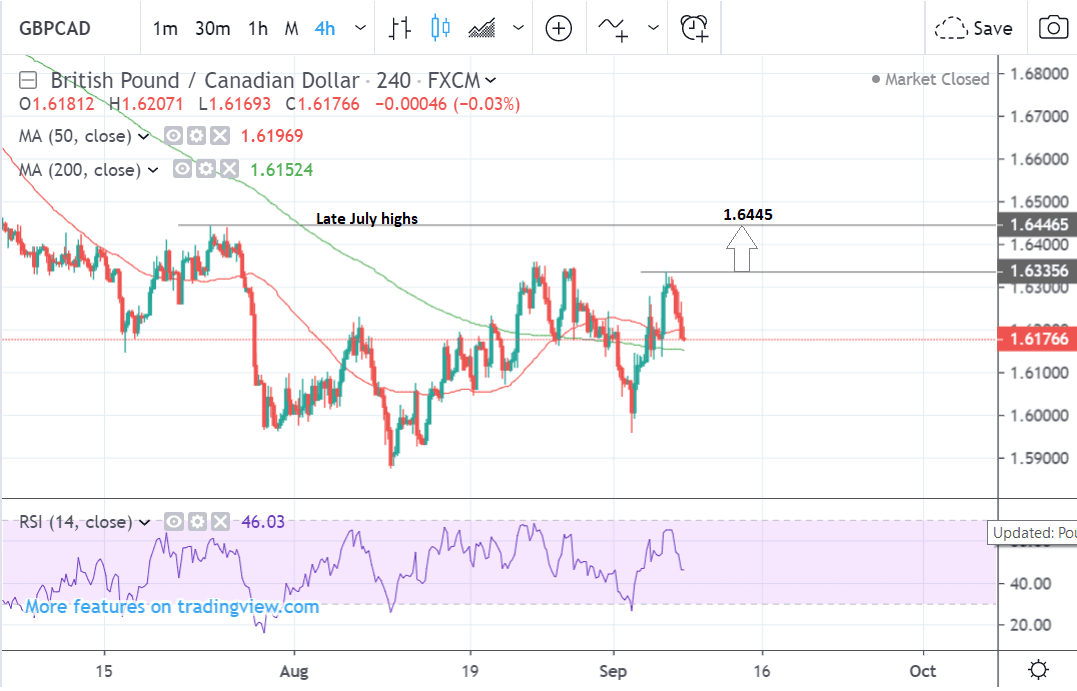 In the short-term, a break above the 1.6335 highs would probably give the green light to a continuation higher to a target at 1.6445 and the late July highs.

The daily chart shows how the pair may be in the process of rising in a bullish price pattern known as a ‘measured move’ which suggests more upside on the horizon. 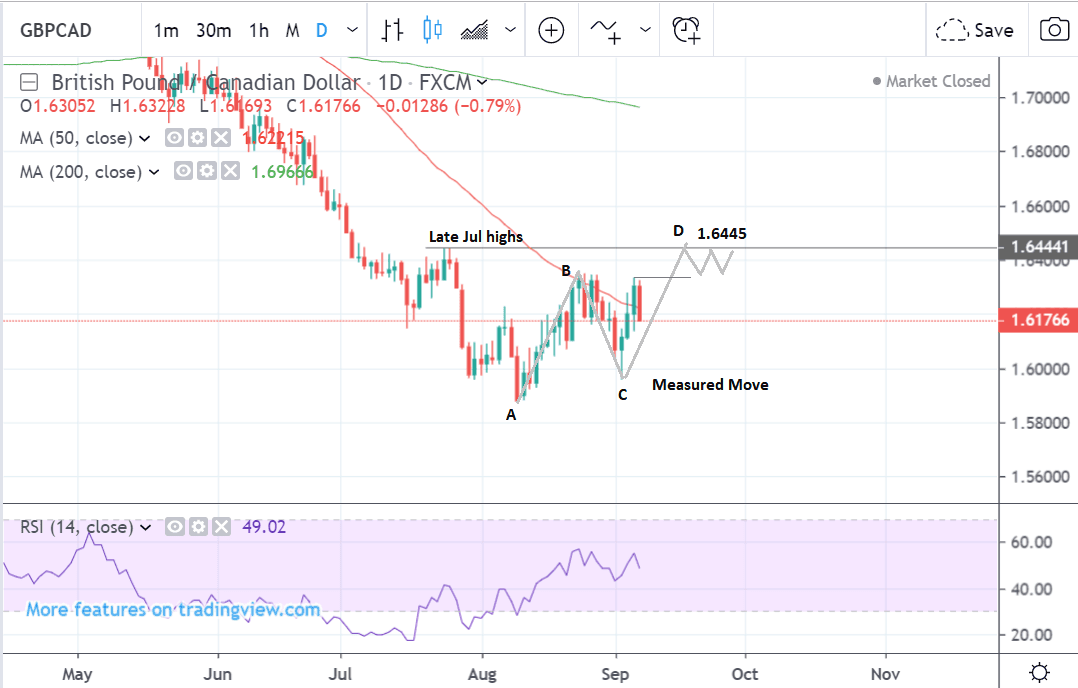 Measured moves are three wave patterns in which the final C-D wave is usually of a similar length to the A-B wave. This gives a final target of 1.6445 which happens to, coincidentally, be at the level of the late July highs.

The RSI momentum indicator is rising strongly and is at the same level as it was when the exchange rate was in the 1.70s, which is a bullish sign.

The weekly chart - used to give us an idea of the longer-term outlook, which includes the next few months - shows the pair having completed a larger ‘measured move’ which began at the 2018 highs. 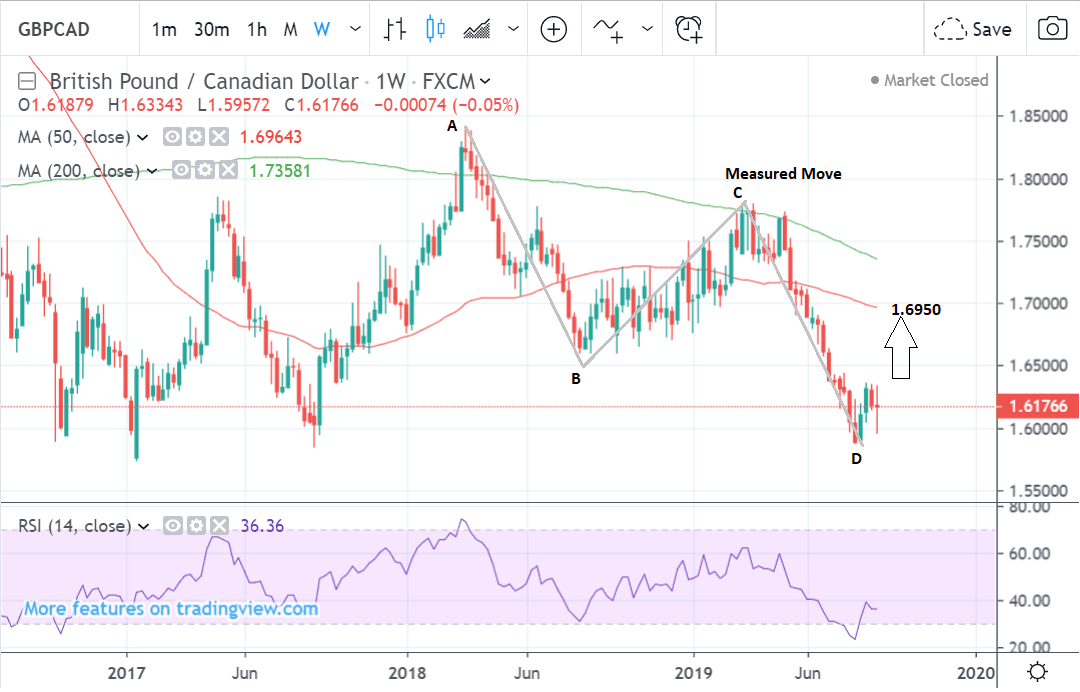 The pattern is now probably complete as the final c-d leg has reached the same length as the a-b leg.

The fact the RSI momentum indicator has exited the oversold zone and is rising quite strongly provides further bullish evidence and suggests a rise up to a target at 1.6950, at the level of the 50-week MA, is not out of the question.

The Canadian Dollar: Oil in Focus

The Canadian Dollar is positively correlated to the price of oil which may fluctuate when OPEC has its meeting, at 11.00 BST, on Thursday.

Whilst no-one expects OPEC to change their official policy of limiting supply to keep oil prices elevated, recent data shows countries that belong to the organisation have in reality chosen to allow supply increases, and these could lead to softer prices in the future.

“OPEC’s crude oil production rose in August compared to July, another market survey found on Friday, despite OPEC’s continued calls for sticking to the cuts to achieve “market stability,” says Tsvetana Paraskova, a reporter for oilprice.com.

According to the latest S&P Global Platts survey, OPEC’s production increased by 50,000 bpd from July to reach 29.93 million bpd in August, with Iraq, Nigeria, and Saudi Arabia boosting output.

A quiet domestic data calendar leaves Canadian Housing Starts, out at 13.15 on Tuesday, as the main release.

The consensus estimate is for a 204.5k rise in August but some analysts are more optimistic.

“Housing starts are forecast to rebound to a 230k pace in August on a partial recovery in both multi-unit and single family construction. Weather conditions in August were more favourable for construction after heat waves in the prior month, and recent signs of life in the resale market along with lower rates should also help support development. Annualized starts of 230k in August would push the six-month trend back to 220k – the highest since June 2018 – and help to support residential construction over the coming quarters,” says TD Securities, a Toronto-based investment bank. 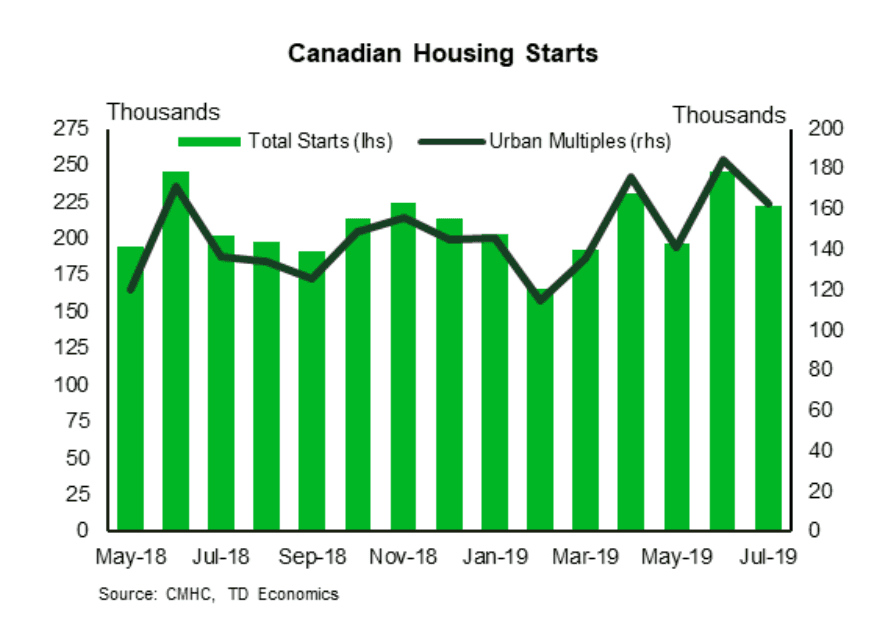 A strong housing market is normally a good sign for the economy. It is said ‘housing leads the economy’.

A good housing starts result, therefore, will help support the Canadian Dollar, even though it is unlikely to directly drive a move.