The GBP/CAD exchange rate is likely to see further losses before the year is out, according to the latest forecasts from Scotiabank, which have been downgraded due to the unforeseen resignation of Prime Minister Theresa May which has effectively put the Brexit process on hold.

Scotiabank, Canada's third largest lender and number 40 in the global league table, says Pound Sterling is now unlikely to recover its recent losses against the U.S. Dollar and Canadian Loonie in 2019 because the Brexit process looks as if it'll drag on for much longer than was previously anticipated.

Risk of a 'no deal' Brexit, which would see the UK leave the EU without any formal agreement and default to doing business with it on World Trade Organization (WTO) terms, is also rising given the mounting prospect of a pro-Brexit Prime Minister being installed in 10 Downing Street this summer. 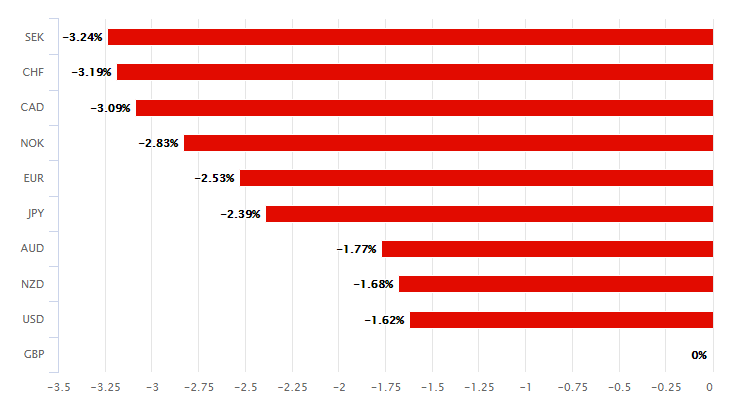 Above: Sterling's performance over the past month.

Prime Minister Theresa May resigned as leader of the Conservative Party this month and there are now ten candidates vying for the support of their parliamentary colleagues in order to replace her. Her resignation followed a drubbing for the Conservatives in the May European parliament election.

Once a balloting process that kicks off Thursday and runs for several weeks is complete, those ten will have been whittled down to just two, who'll then be presented to grassroots members of the party who'll choose the next leader of the country.

This means there's a risk of a pro-independence Prime Minister being installed in 10 Downing Street although the Westminster process creates scope for a pro-remain parliamentary party to leave grassroots party members with a choice between candidates who're perceived as being more 'moderate' than their Brexiteering colleagues.

Candidates' views on whether they'd be willing to pursue a 'no deal' Brexit if the EU refuses to omit the controversial 'Northern Irish backstop' from the EU withdrawal agreement are dominating the parliamentary balloting process and will likely be the focus point of the grassroots members.

"Boris Johnson has indicated that he would be ready to exit the bloc in late-October with, or without, a deal, while Michael Gove appears more amenable to bridging differences within Parliament," Osborne says. 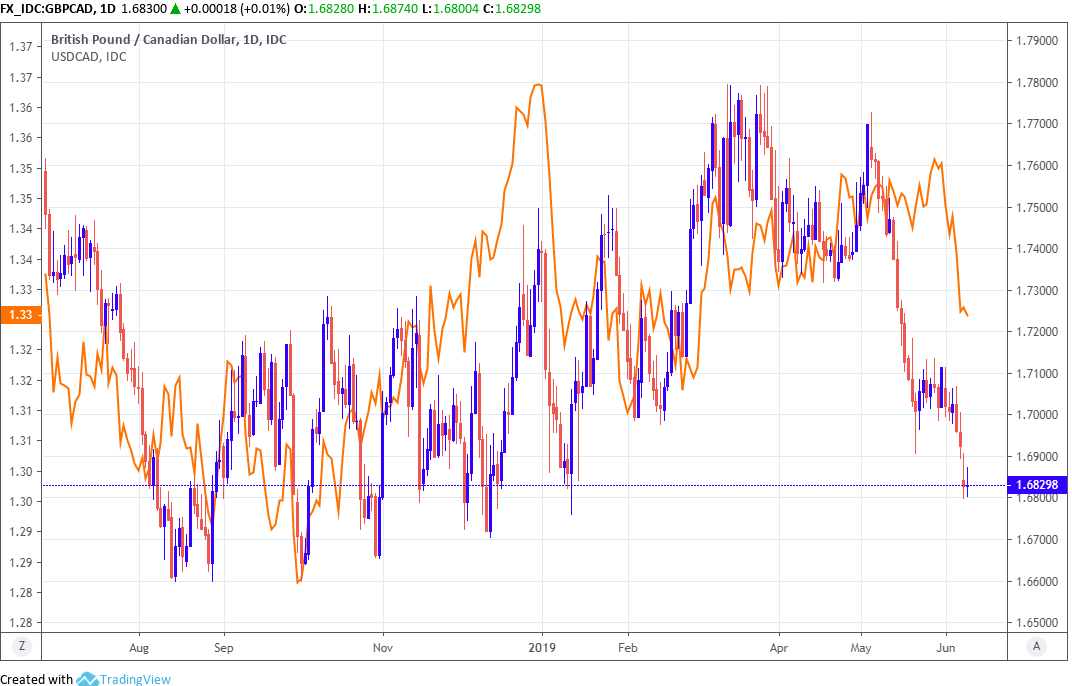 It's the bellicose pledges of some leadership candidates that have got financial markets uneasy in recent weeks, sending the Pound-to-Dollar rate down by more than 2% in the last month and the Pound-to-Loonie rate some 3% lower.

Members of the opposition Labour Party and some Conservative Party MPs have claimed they'll vote to bring down any government that attempts to leave the EU without signing the controversial withdrawal treaty, which may be the only thing that's spare Sterling from more punishing losses in recent weeks.

However, it's far from clear whether enough opposition MPs would actually make good on this threat given the result of the recent European election and Peterborough byelection. The EU poll saw the Labour Party slide into third place, behind the pro-remain Liberal Democrats and newly formed but first-placed Brexit Party.

Labour held onto the seat of Peterborough in last week's byelection but only by around 800 votes, which gave it a record low majority for a byelection. As a result it's not clear the opposition leadership would actually want to risk an election at present and it's even less certain the Labour Party would win one.

"We expect GBP to end the year around current levels and have a Q4 2019 forecast of 1.25," Osborne says, of the Pound-to-Dollar rate. "We have downgraded the outlook for the CAD modestly over the forecast horizon as a result of the weak start for domestic GDP growth to 2019 and lingering trade headwinds. We now forecast and end 2019 rate of 1.30 (0.77 USc), from 1.28." 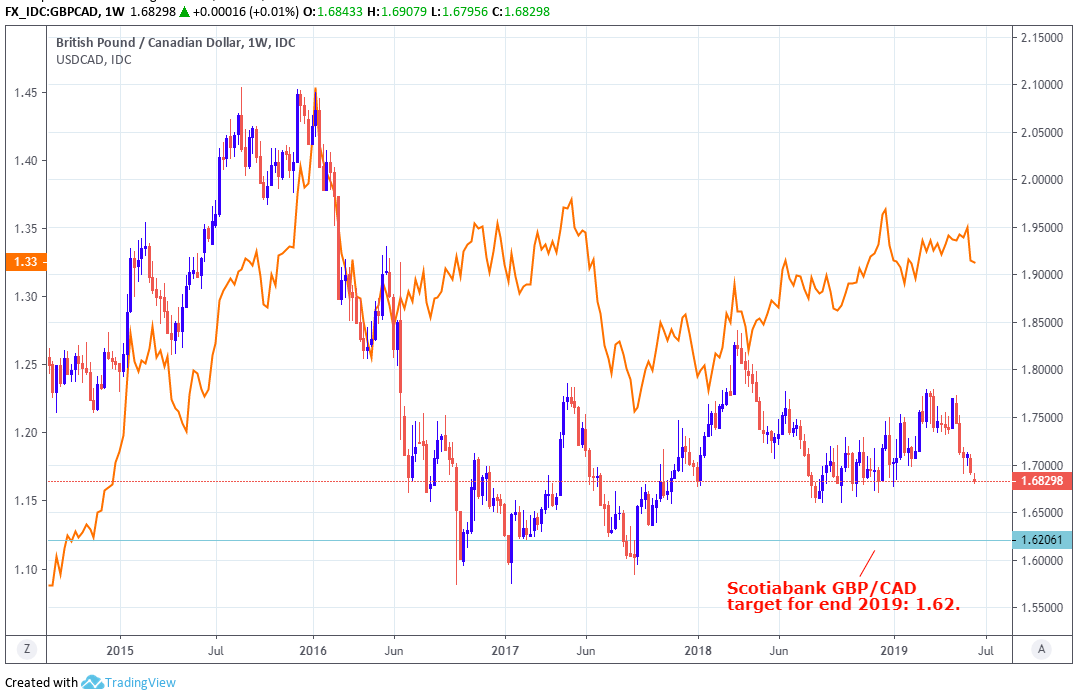 Scotiabank has cut its Pound-to-Dollar forecast for year-end from 1.40 previously to 1.25 which, when combined with a USD/CAD rate that's expected to go on declining due to a recovering Loonie, puts the Pound-to-Canadian-Dollar rate on course to return toward its post-Brexit-referendum low of 1.58.

Osborne projects the Pound-to-Loonie rate will fall to 1.62 by year-end, from 1.68 Tuesday. This is a downgrade from an earlier target of 1.79 and implies a further loss of 3.5% before the year is out. The short-term outlook is equally bearish, according to Osborne's technical analyst colleague Eric Theoret.

"GBPCAD is leaking lower, as expected, following the downside break from the base of the bear triangle consolidation," Theoret writes, in a note to clients last week. "We note that bear trend momentum is picking up on the shorter term oscillators and aligning with negative signals on the longer run trend momentum signals. This may induce a pick up in the sell-off, the more so if support at 1.6906 gives way. We think the GBP is heading towards a return to the 1.65/1.67 range (at least)."