-AUD likely bottomed in May, say Commonwealth Bank of Australia.

The Australian Dollar has likely seen its nadir of 2018 this May, according to strategists at Commonwealth Bank of Australia, who argue the Antipodean currency should edge higher against the US Dollar and see only modest losses to Pound Sterling during the rest of the year.

This call comes after a five month period that saw the Aussie Dollar rise strongly against its North American rival during January only to slide by more than 7% during the subsequent months to the middle of May.

That culminated in the AUD/USD rate coming within a hair's breadth of the 0.7400 level this month although, since then, the exchange rate has already begun to rebound higher and was quoted at 0.7594 Tuesday.

"The forces pushing AUD/USD down in March and April have faded," says Elias Haddad, a senior FX strategist at Commonwealth Bank of Australia. "We expect AUD/USD to consolidate in the 0.7400-0.7600 region in coming weeks."

Initially, the Australian Dollar rout that began in late January was sparked by weaker than expected inflation figures for the final quarter of 2017. This, and a poor fourth-quarter wages report, saw markets go from betting the Reserve Bank of Australia would raise its interest rate around August this year, to wagering it will now sit on its hands until well into 2019.

On January 22, 2018, the market-implied Australian cash rate in August 2018 was 1.67%, suggesting around a 70% probability the Reserve Bank of Australia would raise its interest rate to 1.75% at its meeting on the 07th of that month. By March 19, that probability had fallen to less than 5%, with the implied Aussie cash rate on August 07 sat at 1.51% and closely married up with the current rate of 1.50%.

This change was responsible for around half of the total year-to-date losses dealt to the Aussie. The rest of the pain has been the result of a resurgent US Dollar that lifted itself off from the depths of its own multi-year lows around the middle of April and has since converted a 4% 2018 loss into a 1.22% gain. 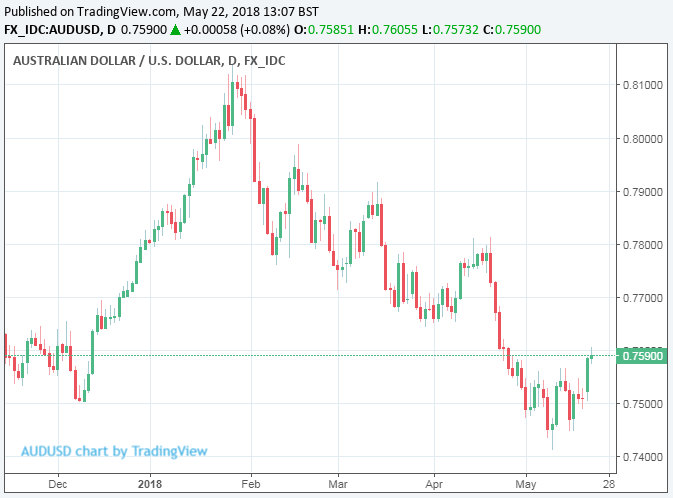 The US Dollar rebound seen in April and May has been driven by a step higher in American bond yields, which have reached multi-year highs during recent weeks, at a time when currency markets have renewed their focus on interest rate differentials.

This means recent weeks have seen investors incentivised to sell Aussie Dollars and to buy the greenback in order to invest in the American bond market rather than vice versa. That is the opposite of how the so called carry trade, which has traditionally propped up the Aussie relative to its international peers, used to work.

However, the CBA team say the US Dollar has already had its best days in the sun because there is only limited upside to US interest rates from their current levels and this means the yield-differential that drove the Aussie's losses during April and May cannot realistically exert much more downward pressure on the currency. There are also other reasons to think the US Dollar may actually resume its downtrend during the months ahead.

"USD will re-weaken and support a higher AUD/USD," says Haddad. "We expect this for a number of reasons." 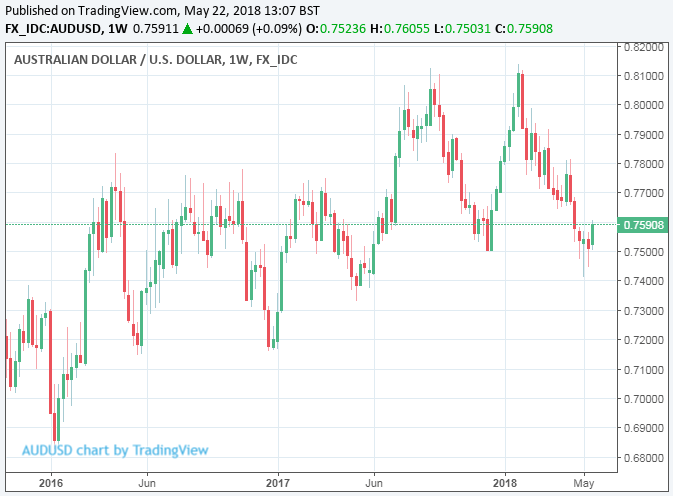 The CBA economics team forecasts a renewed upturn in global economic growth later this year and Haddad has flagged that the US Dollar normally tends to weaken as global growth picks up. This is because investors tend to rotate out of safe-have Dollar-denominated assets and into more risky but higher yielding assets elsewhere in the world, leading to a steady stream of Dollars being dumped onto the market.

A gradual withdrawal of monetary stimulus from central banks like the Bank of England, Bank of Canada and European Central Bank, which is not yet fully priced into currency markets, could also see the greenback weaken selectively later in 2018.

This is while, more over the medium term, President Donald Trump's tax cuts are expected to result in higher American consumer spending over coming quarters that ensures an additional supply of Dollars will be dumped onto the market as households and businesses import more goods from overseas.

Haddad and the CBA team forecast the AUD/USD rate will rise at a steady pace of one cent every quarter out until the middle of 2019, which should take it from 0.75 Tuesday to 0.76 by the end of June, 0.77 by the end of September and 0.78 by the time the year is out.

For the Pound-to-Australian-Dollar rate they predict Sterling will rise from 1.77 Tuesday to 1.82 before the end of December 2018 and that the exchange rate will remain close to that level throughout much of 2019. This implies an increase of some 3%.