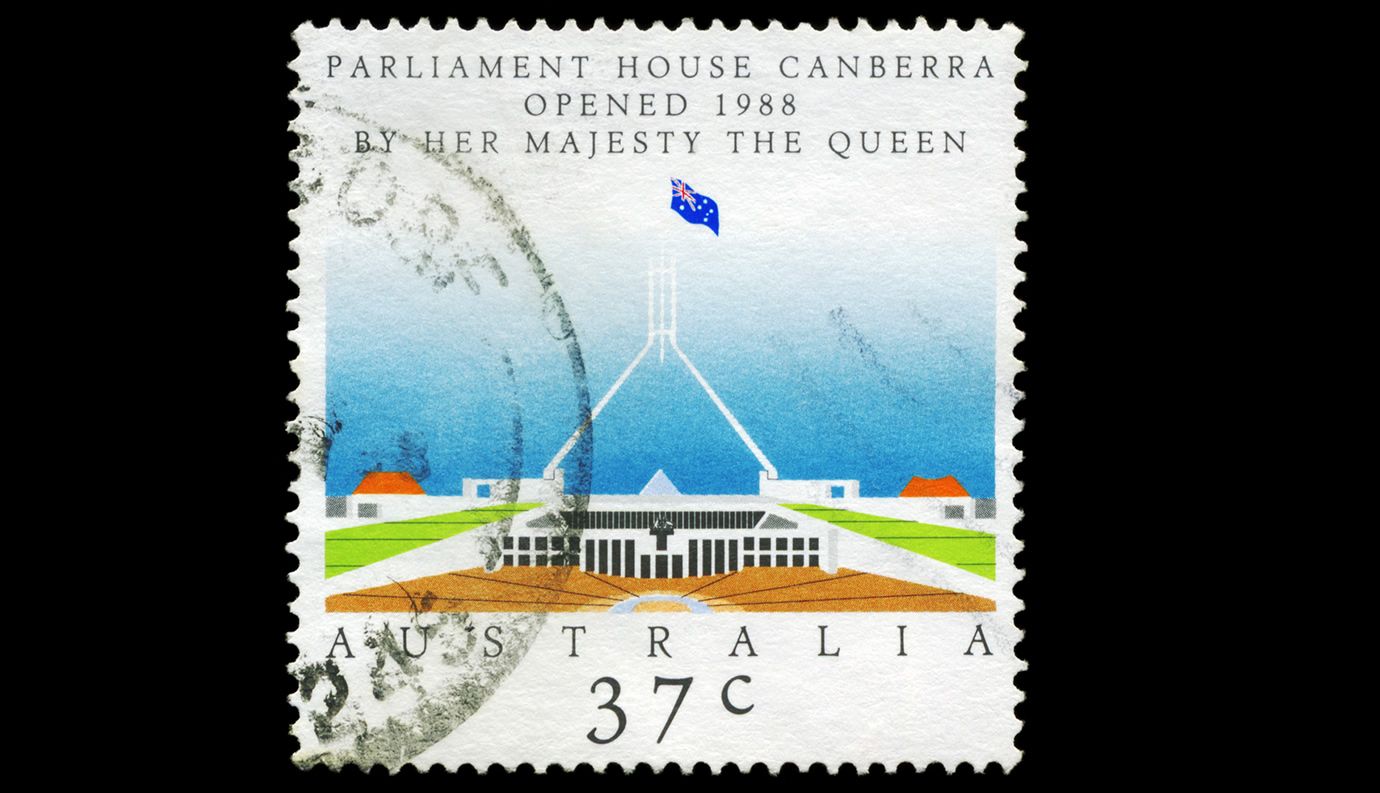 Westpac are bearish on the Australian Dollar's prospects against the Pound, despite contrary signs from charts and the views of other analysts which suggest the Aussie faces a decent 2018.

Analysts at Australian high-street name Westpac bank have written to clients confirming they maintain the view the Australian Dollar is likely to decline despite the currency doing better than many analysts had expected over recent months.

Against the US Dollar, the Aussie looks "pricey" when compared to estimates of what is should be worth, otherwise known as its 'fair value' estimates, and this indicates potential weakness as the currency drifts back down towards equilibrium.

"AUD/USD still looks pricey, with the pair well above our estimates of fair value given yield differentials, commodity prices, and increased volatility," says analyst Sean Callow at Westpac's Sydney base.

The Pound's continuing rebound against the Aussie is also likely to extend because of its high correlation with the US Dollar who Westpac see heading higher despite a tough few months.

The Pound-to-Australian Dollar exchange rate is seen to be below its long-term average trading ranges (since Brexit) as illustrated in the chart below, and therefore expected to revert back to more comfortable levels over time. 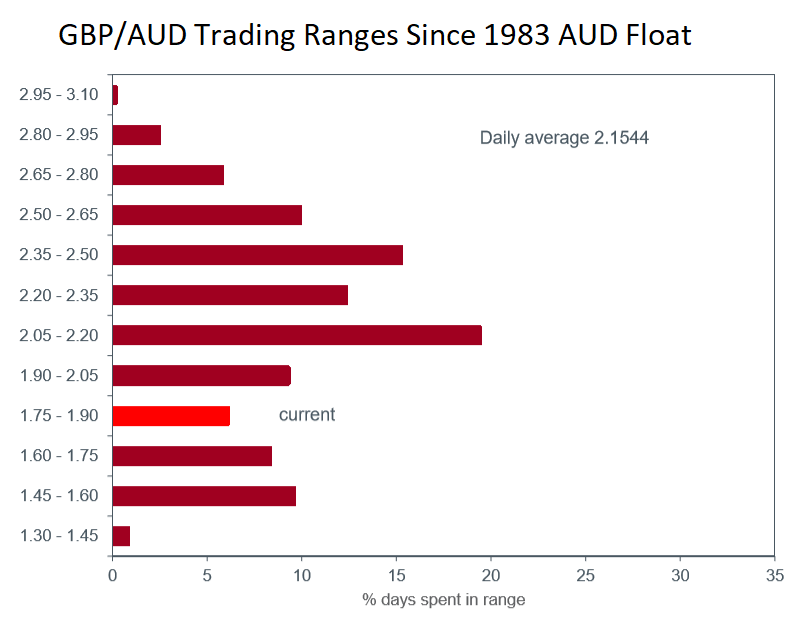 The direction of the difference between UK and Aussie country's interest rates also appears to favour a Sterling rebound.

Australian interest rates are higher at 1.50% than in the UK where they are 0.50% and this would normally be expected to favour AUD as investors prefer to park their cash where it can earn the most interest. The borrowing of cheap GBP being transferred into AUD-based assets that earn a greater return naturally creates a demand for the Australian currency that has over recent years seen it appreciate.

Yet, an increase in interest rates in the UK over coming months - as communicated by the Bank of England at various policy events - suggests the Australian Dollar's advantage on this front is likely to slide.

Westpac's house view remains that the Reserve Bank of Australia will not change interest rates in 2018 and 2019.

In short, the 'catching up' of UK interest rates with those of Australia is supportive of Sterling. 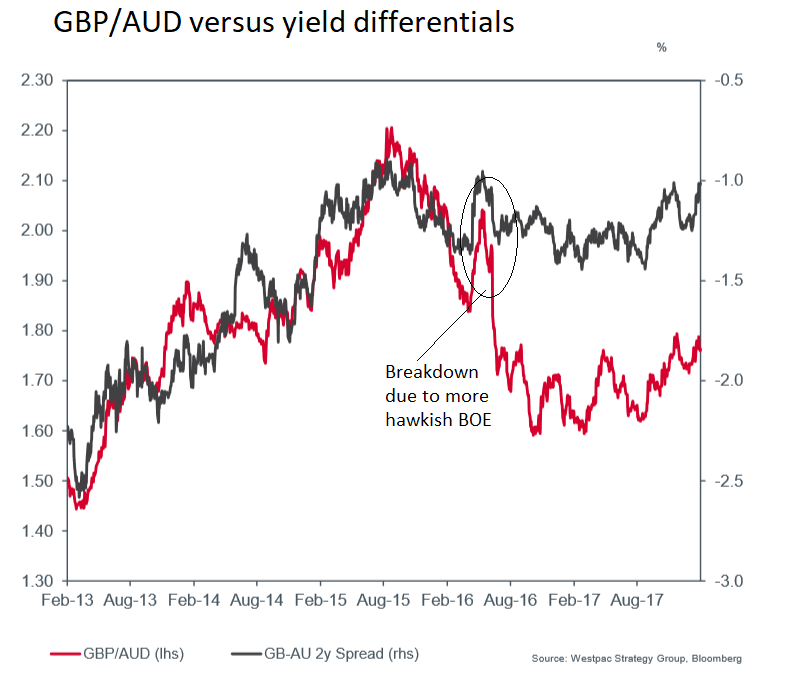 However, not all of Westpac's evidence is GBP supportive.

Sterling positioning in the futures' market is stretched making GBP/AUD vulnerable to a sell-off:

"Speculative Sterling long positions are very close to highs since 2014, which could see substantial profit-taking on any increase in concerns over Brexit or PM May's leadership or extra BoE caution."

When too many traders are bullish a currency in the futures' market, as they appear to be in the case of Sterling, it is actually a contrarian indication and poses a risk for the currency.

Overall, however, Callow is bullish GBP/AUD suggesting risks are on the upside with the pair rising to 1.82.

GBP/AUD Charts: Is this the End of the Road for the Sterling Rally?

Our own technical studies of the GBP/AUD charts confirm it is still possible to see the makings of a bearish double-top reversal pattern in the outline of market action which has formed at the recent twin peaks which formed in December 2017 and February 2018 on the weekly chart. 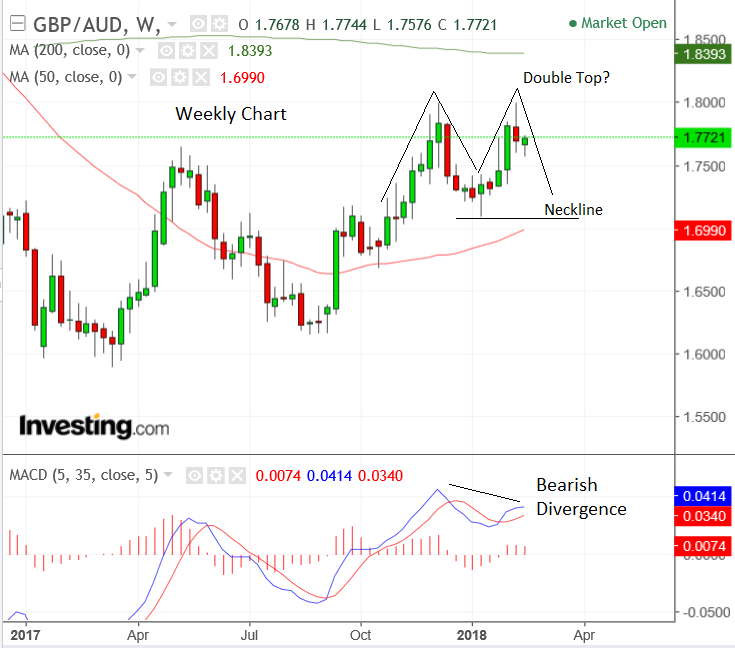 Technical analysts study price action and use charts for the purpose of forecasting future moves; their methods are widely used by professional forex traders.

If the market starts falling from here it could start to form a more compelling double top reversal pattern with more bearish connotations.

A break below the neckline at the 1.7094 January lows could usher in an even more bearish phase and see the exchange rate fall to a target in circa the 1.65 regions.

The MACD has diverged at the second peak which means upside momentum was not as strong in February and this provides supporting evidence of more weakness.

But Technicals Favour the Aussie Against the US Dollar

Whilst Westpac are bearish when it comes to the Australian Dollar's future prospects against the Pound, the outlook against the US Dollar appears to be more supportive with several technical analysts confirming they are mildly bullish on AUD/USD.

Peter Rosenstreich, head of market strategy at online bank Swissquote, for example, is short-term bullish AUD/USD based on the charts.

Analyst Karen Jones of Commerzbank is also bullish after noting that AUD/USD has bounced off of the 200-day MA and more upside is now on the cards with, "intraday rallies," forecast to "terminate circa 0.7895, possibly as much as 0.8000."

Our own analysis also leads us to adopt a more bullish AUD stance.

We note how AUD/USD has fallen to both the level of the 50 and 200-day moving averages in the 0.77-78 range, and this is an extremely significant bullish sign.

Large moving averages, especially the 50 and 200-day, can provide strong support to prices and there is a good chance the exchange rate could bounce at the current level or even reverse and start moving higher in a new short-term uptrend (see chart below). 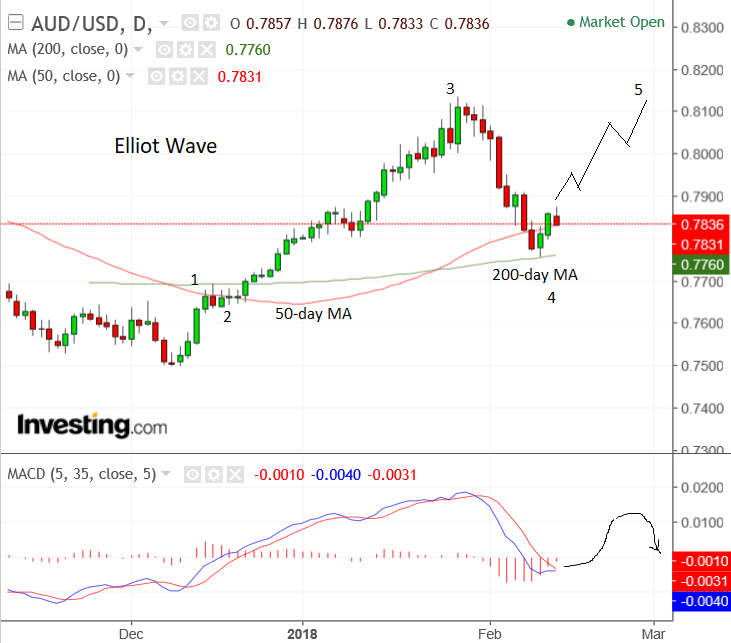 We expect the pair to start rising from its current level - and not just because of the support provided by the moving averages, but also because of the structure of the market which is closely resembling a type of cycle wave higher, called an Elliot wave.

Elliot waves move in five phases numbered 1-5, as illustrated in the idealized Elliot Wave below. 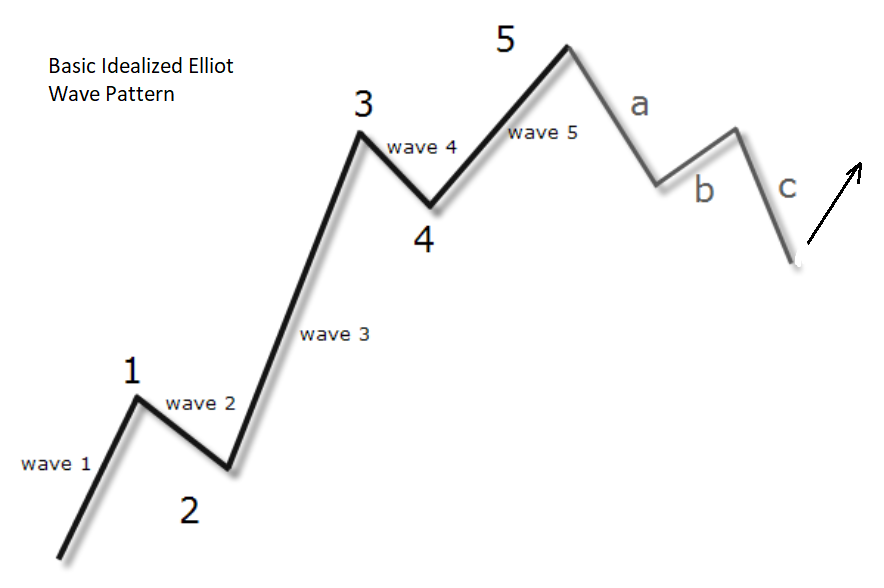 AUD/USD appears also to be forming what looks like a incomplete Elliotwave at the moment on the daily chart.

The pair looks like it has probably completed waves 1-4 although it has not yet finished the final wave 5 higher.

The MACD on 5,35,5 setting is dipping below the zero-line after peaking at the wave 3 highs, which is a sign wave 4 has probably finished too.

The next move, therefore, is likely to be wave 5 as it unfolds higher, reaching to at least as high as the top of wave 3 in the 0.81s.

The Australian Real Effective Exchange Rate, or REER, which is an index of the currency versus a basket of competitors, is also showing signs the current short-term move lower may be about to end.

The down move on the AUD index pictured below has reached a trendline where it is likely to be supported.

There is a good chance it could rotate at this level and start to climb.

The AUD index may also be forming a triangle with a bias to an eventual upside breakout higher, further suggesting Aussie strength both short-term and possibly longer-term too.

Another major influence on the currency could come from Australian iron ore exports.

Iron ore will see increased demand from its largest customer China as the 5-month winter shutdown instituted in November 2017, to reduce pollution, will end at the end of March, and before then demand for iron ore from the mills will probably start ramping up in preparation for reopening.

This could see demand for iron ore steadily increase over the six weeks between now and when the mills reopen.

This could be a major factor pushing the Australian Dollar higher as iron ore is its largest export and increases in demand for the commodity normally have a knock-on effect on AUD.

Despite enforced government cuts due to a new environmental push in China crude steel output was still expected to exceed a record set in 2016 by climbing to 832 million tonnes in 2017 and is forecast to continue to rise in 2018 as major mills ramp up operations to take advantage of steel's current price rally.