The Pound has defended the lower end of its multi-month range against the Australian Dollar and looks set to remain above A$1.72, with further rebound potential over the coming week which sees both the Bank of England and Reserve Bank of Australia deliver policy decisions.

The RBA decision on Tuesday comes on the back of four successive days in decline by the Aussie Dollar against the Pound, with markets anticipating another 50 basis point hike.

The Pound's recovery against the Australian Dollar was aided last week by the release of inflation data for the second quarter that suggested inflation might be nearing a peak, easing pressure on the RBA to step up the pace it delivers interest rates.

The Pound to Australian Dollar exchange rate rose half a percent last week to close at 1.7408, thereby defending the bottom of the range that has dictated trade in this pair since March: 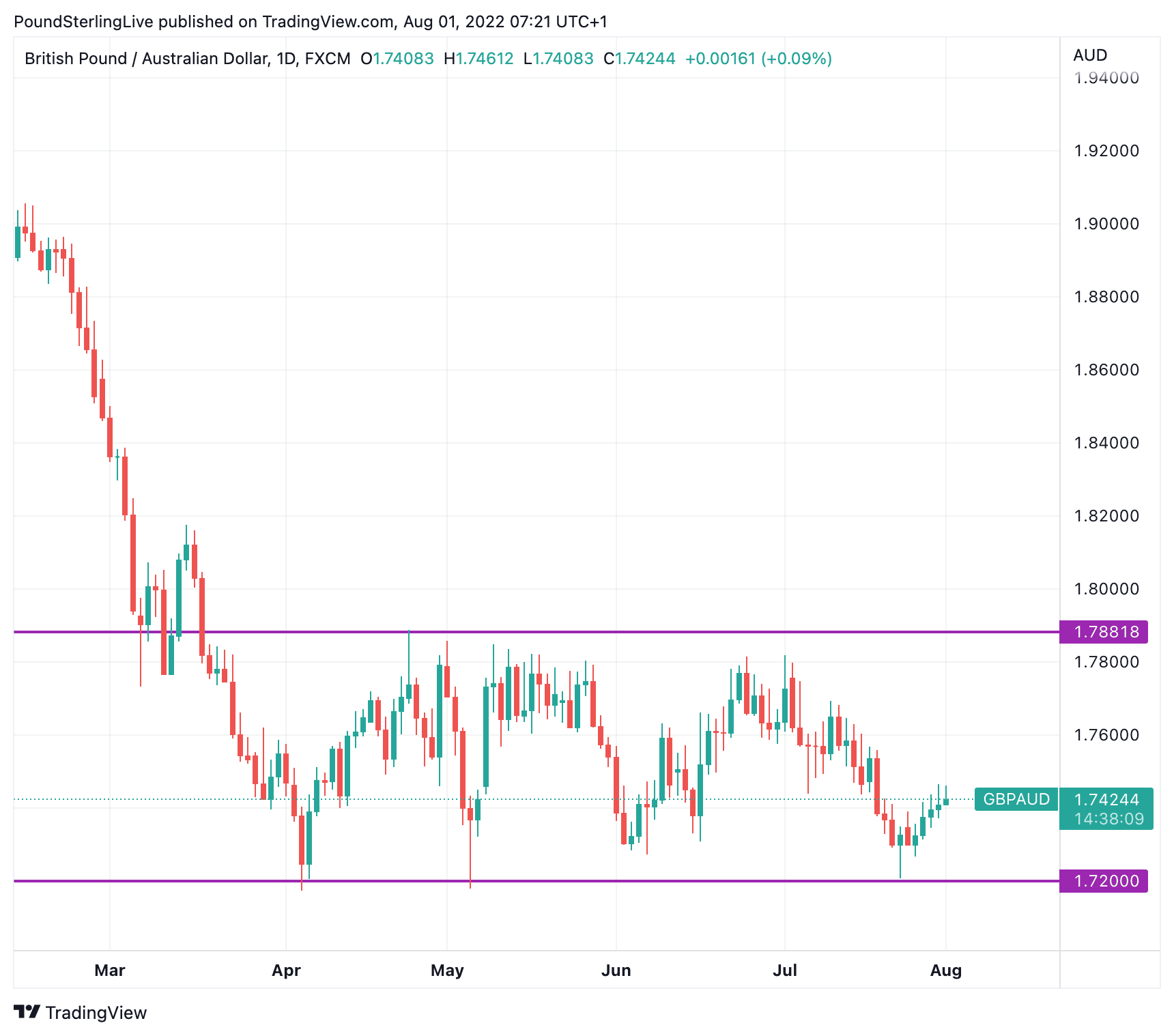 Above: GBP/AUD at daily intervals showing the approximate location of the dominant range.

For the market to break to the downside (AUD to strengthen) the RBA might have to surprise markets by going bigger than 50 bp, potentially hiking by 75bp.

In addition, the RBA would need to signal an accelerated approach to hiking rates. But this is unlikely, given the lack of surprise factor in last week's inflation numbers.

"We expect the RBA to hike rates by 50bp on Tuesday and with the market a bit under 80% priced for this outcome, it will not provide much of an impetus for the AUD," says Valentin Marinov, Head of G10 FX Strategy at Crédit Agricole.

"The market will be on the lookout for any signs that the RBA is willing to slow the pace of its rate increases,"adds Marinov.

Furthermore, the impact of rising interest rates are now most keenly felt in the Australian housing market where house prices continue to fall according to data out Monday, suggesting the policy is having the desired impact of cooling the economy.

The CoreLogic home value index, covering the eight major capital cities, fell 1.4% in July, following on from a 0.8% decline in June and a 0.3% dip in May. 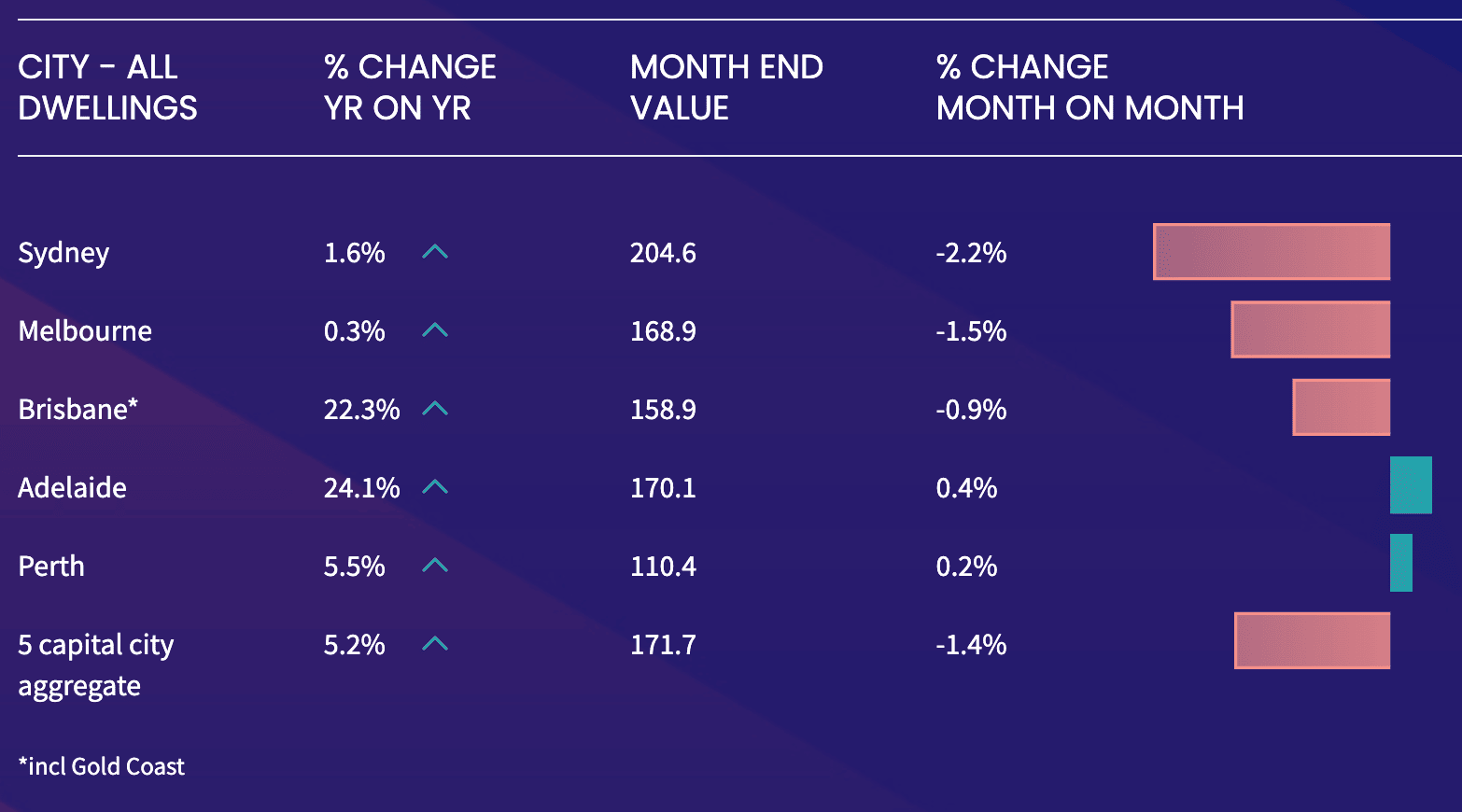 "The July fall is the largest monthly decline since 1983. That said, prices are still elevated, up 5.4%yr, the retracement to date only taking prices back to the level they were at in October last year," says Hassan.

The Core Logic data shows the price correction deepening in Sydney and Melbourne, and spreading to other markets, Brisbane, Hobart, Canberra and most regions also recording material declines.

"The price correction is likely to continue deepening and broadening as the RBA delivers more rate hikes in coming months. Conditions will only improve once policymakers are convinced that the inflation threat has passed," says Hassan.

For the GBP/AUD exchange rate much will of course also depend on the Bank of England's Thursday policy update, where markets are now anticipating a 50 basis point hike.

The initial risk for Sterling would be the Bank failing to validate market pricing and option for another 25 basis point hike.

Much will however depend on the guidance regarding future interest rate moves and the forecasts contained in the Monetary Policy Report (MPR).

The May MPR was met with a decline in the Pound as it showed the Bank was increasingly pessimistic about the outlook, prediction a recession would occur in the event of further interest rate hikes.

Furthermore, inflation was projected to fall back to the 2.0% target over the medium term.

But the Bank changed tone at the event of the June rate hike saying it would react forcefully to the UK's surging inflation rate.

Markets took this as a sign it was stepping up its fight against inflation, and this was seen to have supported the Pound.

Given the strength of the support in GBP/AUD at around 1.72 and the relative expectations regarding the two central banks, the pair should remain supported this week.