The Pound to Australian Dollar exchange rate edged toward five month highs just to the north of the close by 1.90 level early in the new week and could now be likely to hold onto the recently recovered 1.88 handle following a soft start to 2022 by the antipodean currency.

Australia’s Dollar slipped lower through the major currency league table during the earliest days of the new year and was vying with the New Zealand Dollar for the bottom spot by Tuesday in price action that has helped to rejuvenate and sustain the uptrend in GBP/AUD.

The Pound to Australian Dollar rate rose more than two percent during the week to Tuesday as Sterling climbed higher against the U.S. Dollar while its antipodean counterpart gave way to the greenback in price action that has so far kept AUD/USD suppressed beneath the recently lost 0.72 level.

“Net AUD short positions edged up for a third consecutive week. They remain elevated despite the more constructive tone of the RBA last month,” says Jane Foley, head of FX strategy at Rabobank, in reference to the final 2021 installment of Chicago Futures Trading Commission (CFTC) data covering the position commitments of traders. 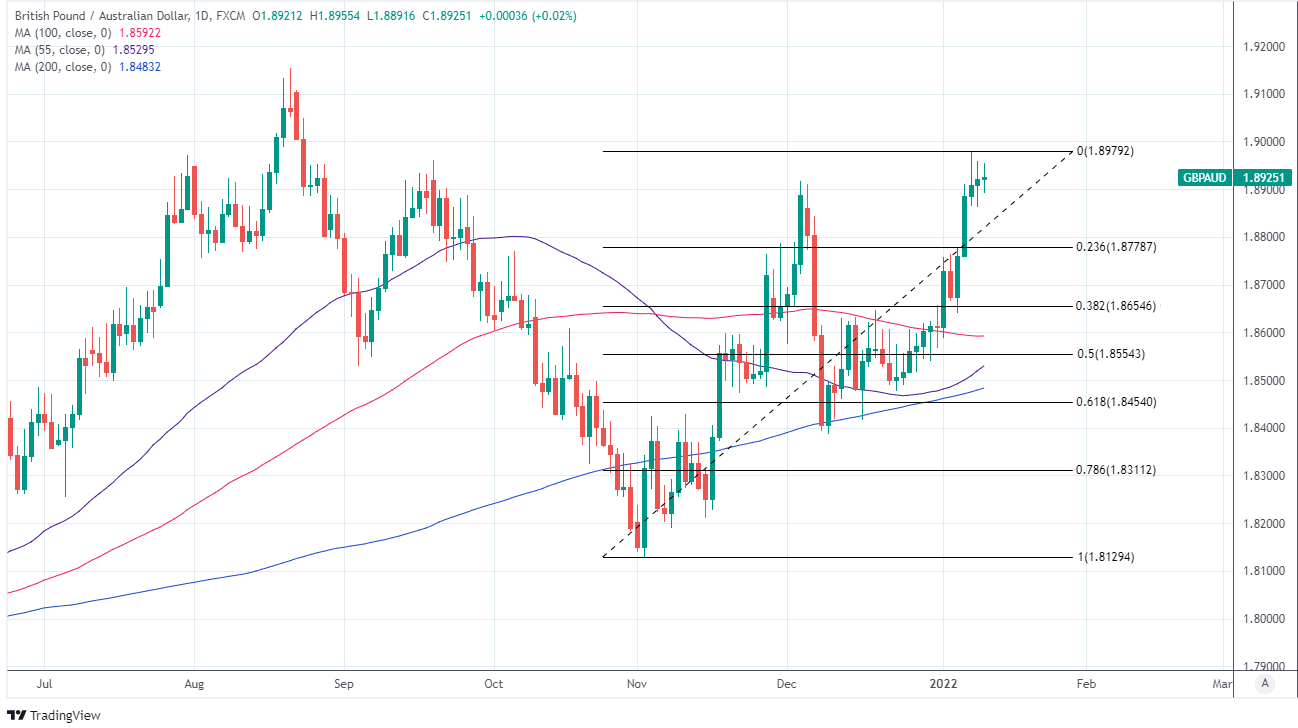 “Speculators’ net long USD index positions have edged up again, returning to their highest levels since October. The Fed has stepped up the hawkish rhetoric in recent weeks and this was extended last week through the minutes of the December FOMC. Very quickly the debate has switched from focusing on an accelerated tapering of QE to a reduction in the Fed’s balance sheet,” Foley and colleagues also said.

Australia’s Dollar enjoyed a moment of respite in December following almost a year of declines against the U.S. Dollar, which dealt GBP/AUD a setback early on last month before Sterling resumed the steady appreciation over the Aussie and other currencies that had characterised much of 2021.

But the Aussie has stumbled so far in the new year, leading it to fall around half a percent against the U.S. Dollar while lifting GBP/AUD back above a 1.88 handle that it could now be set to hold onto for the length of time that AUD/USD remains contained by its late December high around 0.7275.

“Overhead, the 50-day MA is now trending at 0.723, followed by the 0.7274-0.7277 early-Jan pivots and Oct 28 50% retracement. Sustained moves through there would be needed to restore the medium-term bullish outlook that was threatened with the early-Dec marginal overshoot of resistance noted above,” Hunter and colleagues wrote in a recent review of the Australian Dollar’s charts.

Hunter and colleagues are looking for AUD/USD to “retest the 0.7531-0.7557 resistance zone” during the months ahead but have told clients that this price action would only really be a live prospect if the main Australian exchange rate is able to sustain a break above 0.7277.

Unless and until that happens the Pound-Aussie rate could find itself supported around 1.8804, and would be likely to retain an upward bias for the length of time that AUD/USD remains under pressure or in any consolidation pattern. 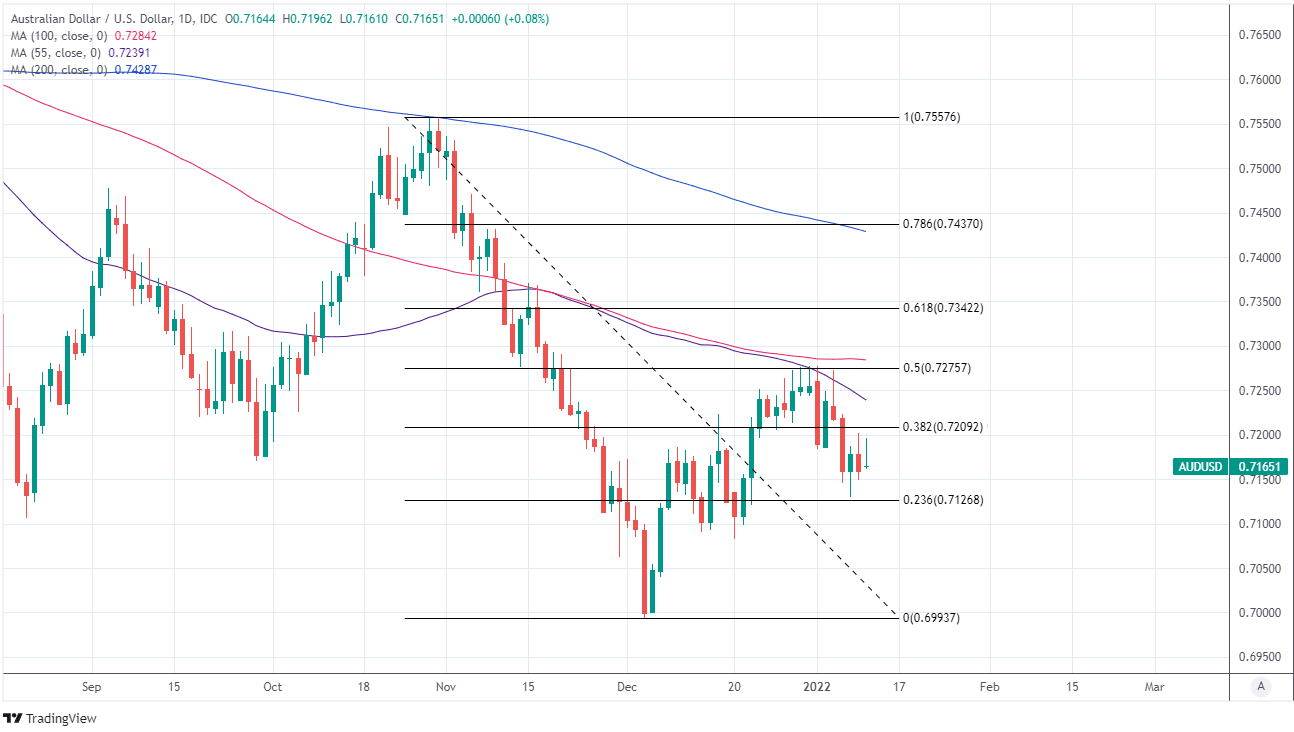 Above: AUD/USD at daily intervals with major moving-averages Fibonacci retracements of November decline indicating likely areas of technical resistance to any recovery.

GBP/AUD tends to closely reflect the relative performances of GBP/USD and AUD/USD, the latter of which drew little sustained benefit on Tuesday from Australian Bureau of Statistics data revealing a strong recovery in Aussie retail spending for December.

“More recently, there have been some tentative early signs of an Omicron-related hit in early Jan, particularly from our card data. High volatility around Christmas-New Year means it will take several weeks to confirm this. While a big Q4 gain in the wider consumer spending measures in the national accounts now looks assured, Q1 is looking shakier with some clear areas to watch,” says Matthew Hassan, an economist at Westpac.

While the Australian Dollar was able to overlook strong domestic retail figures on Tuesday it would likely struggle to avoid being swept up in the market response to U.S. inflation figures due on Wednesday, which are the highlight of the week for all major currencies.

These could potentially act as a headwind for the Aussie, making them an uplifting factor for GBP/AUD, if the data reveals a further acceleration of U.S. price pressures that leads the market to become more confident in wagering that the Federal Reserve is likely to lift its interest rate in March this year.

“The Australian rate market is pricing between three to four 0.25 point hikes from the RBA this year. Those expectations have been encouraged by the Fed’s and RBNZ’s plans to step up rate hikes this year, and by the strength of the Australian labour market,” says Lee Hardman, a currency analyst at MUFG.

“Market participants will be watching closely the RBA’s upcoming policy meeting on 1 st February for a hawkish policy shift. If the RBA decided to bring an end to their QE program it will further reinforce RBA rate hike expectations and support the Aussie although a lot is already priced in considering the RBA is currently signalling it does not expect to begin rate hikes until at least next year,” Hardman and colleagues said on Tuesday.