The Australian Dollar could benefit this year from a recently proposed review of the Reserve Bank of Australia’s (RBA) mandate.

Treasurer Josh Frydenburg told the Australian Financial Review this week that there would be an independent review of the RBA’s monetary policy mandate if the governing Liberal Party wins a majority in a federal election that is expected to be held some time in the first half of this year.

The commitment was made in an exclusive interview published by the Australian Financial Review on Friday and has reportedly been matched with a similar commitment from the opposition Labor Party.

This means there’s a chance of changes to the mandate over the coming year or more, which would likely impact RBA interest rate policy as well as market expectations for the Australian Dollar.

“One area of potential discussion is the RBA's inflation target, which is 2-3% (and therefore an effective midpoint of 2.5%). That target is 0.5% above the targets of all its peers,” says Greg Anderson, global head of FX strategy at BMO Capital Markets. 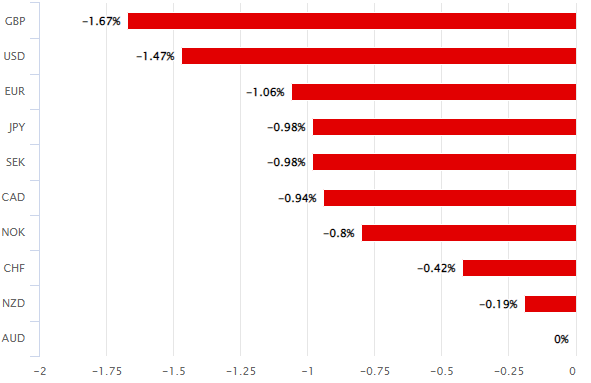 One likely focus of the review and the most important for the Australian Dollar outlook would be the inflation target and any decision whether or not to bring it into line with those of comparable counterparts like the Reserve Bank of New Zealand, Bank of Canada and Bank of England among others.

Australia’s central bank is mandated by the government to use its monetary policy tools like interest rates and quantitative easing in order to ensure inflation remains around or simply returns to 2.5% over a multi-year and medium-term time horizon.

The inflation rate is able to rise and fall around that level but generally shouldn’t deviate outside of a two-to-three percent range, according to the current mandate, although the target has barely been met at all through much of the recent decade.

“The undershooting of inflation targets has been a common, though not universal, experience. The reasons for this are complex but include increasing globalisation, advances in technology and changes in the way labour markets work,” RBA Governor Philip Lowe said in a November speech. 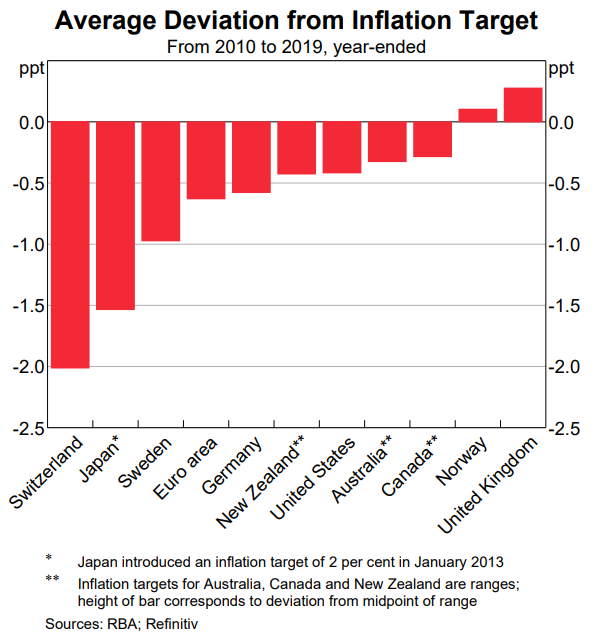 The reasons for why are a matter of frequent debate among policymakers but the RBA is far from being the only central bank to have struggled to meet its inflation target over the last decade and was already cutting its interest rate in order to lift price pressures long before the coronavirus came along.

Governor Lowe has previously indicated a preference to focus on meeting the existing target rather than seeking to reduce it to a level that could be more easily met, although there’s a chance that an independent review would recommend to the government that the targeted level be changed.

There would be potentially positive implications for the Australian Dollar in any scenario where the target is reduced because it would likely necessitate a sooner increase in the RBA’s cash rate from its current pandemic-inspired low of 0.10%, although any such outcome is likely some time away.

“With last year's change in the RBNZ's remit to include limiting house price increases, this is another potential area of emphasis,” BMO’s Anderson also said. 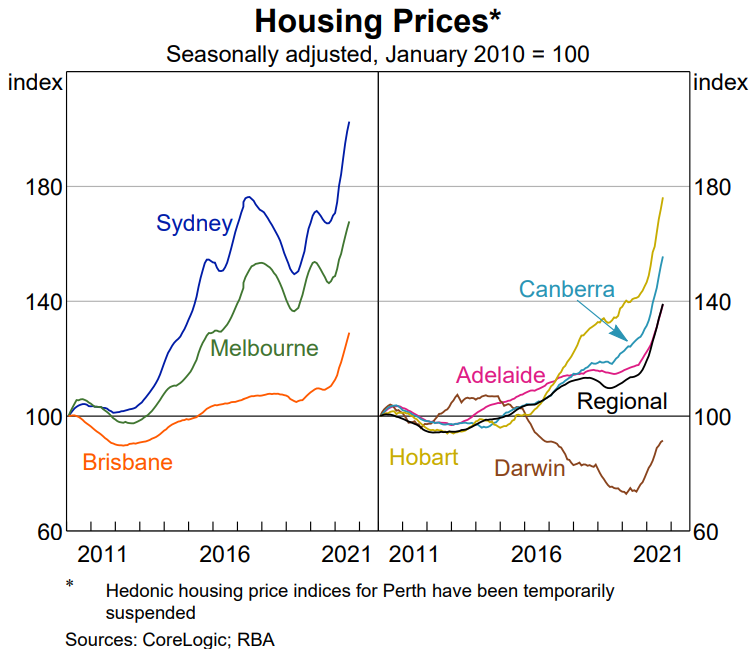 Another potential focus of any review is the possible impact that any change in the mandate could have on house prices that have risen to prohibitive levels for a large enough number of Australians to make them a hot button issue in political debate ahead of this year’s election.

The RBA has previously accepted that its interest rate policies do stoke demand and price increases for some types of housing, although it’s also well established that the prohibitive level of prices is also partly the result of an inadequate supply of housing in some parts.

“If Australia had not been building enough homes to house its population, you would have seen rents rising across the country. Instead, the situation has been mixed in recent years,” Assistant RBA Governor Luci Ellish told a parliamentary inquiry in November last year.

“Rents have been quite weak in the two largest cities of late, but in some regional areas, pressures on rental affordability are reportedly quite acute,” the deputy governor also said. 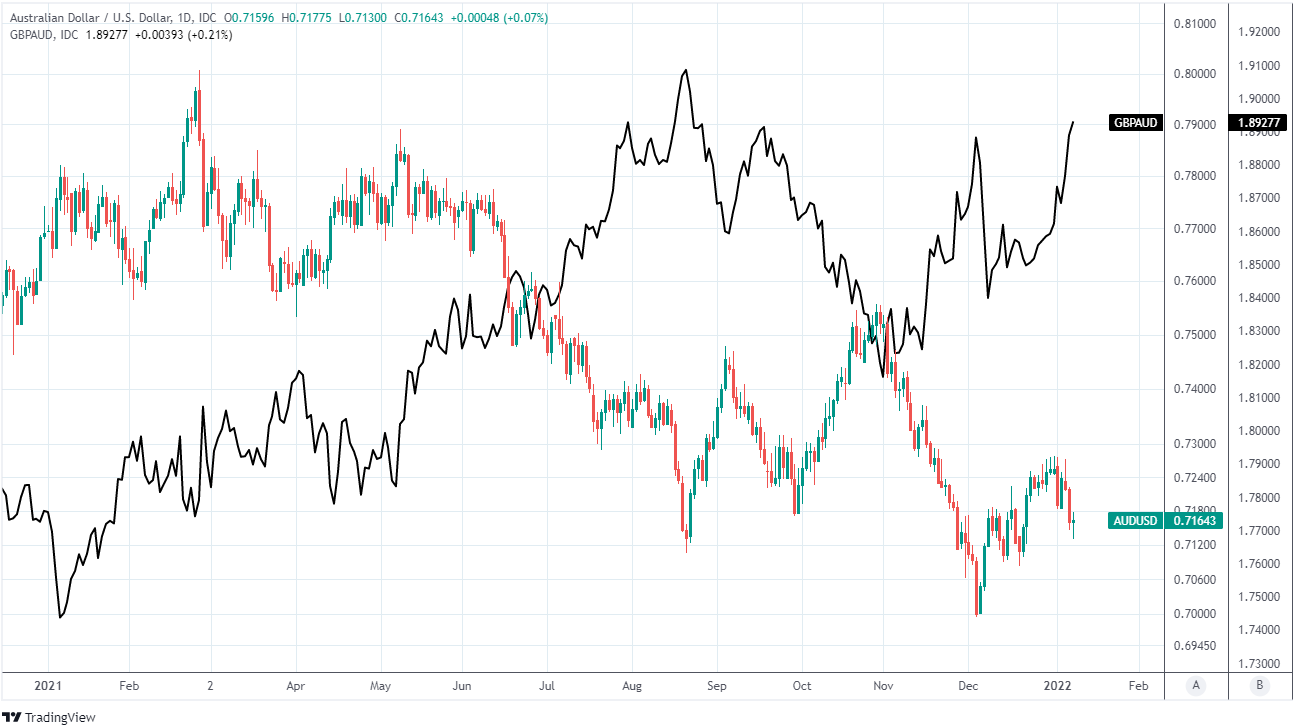 Above: AUD/USD shown at daily intervals alongside GBP/AUD.

There is often a negative or inverse correlation between interest rates and prices of houses, payments for which become more affordable when the cost of mortgage borrowing falls.

This may be why politicians in other parts of the world including in the UK have previously sought to lay responsibility for prohibitive house prices at the feet of independent central banks, rather than using the governmental departments they do control to address inadequacies of housing supply.

That kind of approach could, if taken in Australia, potentially lead the RBA to lift its interest rate sooner than might have been the case otherwise and this would typically be a positive influence for any currency including the Australian Dollar.

The RBA’s latest guidance about its interest rate suggested strongly that it could be among the last of the major central banks to begin lifting its cash rate, which is one reason why the Australian Dollar has underperformed many other major currencies thus far in 2022 and did also previously in 2021.

“The fact that the RBA is only in the early stages of prepping the market for rate hikes also gives AUD a bit more upside potential at the 3M horizon in our view,” says BMO’s Anderson, who tips AUD/USD to rise toward 0.73 over the three months and to 0.77 by year-end.

“USD strength seems to be steamrolling normal commodity effects for now. But if the USD were to flatline, which we would tentatively project for H2, then there would be much more scope for AUD and NZD to catch up to commodity prices, interest rate differentials (in NZD's case), and current account dynamics (in AUD's case),” Anderson wrote in a recent briefing setting BMO’s forecasts for 2022.