The Pound-to-Australian Dollar exchange rate (GBP/AUD) is seen moving higher and studies suggest the path of least resistance remains to the upside, although the Aussie will likely only benefit should the 'risk on' start to the new week extend over coming days.

GBP/AUD tested multi-week highs early on last week when it struck 1.8960 before retracing that advance and stabilising again above support at 1.8854.

At the time of writing the pair is back at 1.8866 as gains come amidst a solid start to the week for stock markets, hinting that global investors are in a bullish mood at the end of a shaky September.

How long any improvement in sentiment lasts will likely be the ultimate fundamental determinant of near-term Aussie Dollar price action.

"Focus this week will be on regional asset markets and long-end rates, with the near-term risks to the AUD balanced," says Brian Martin at ANZ Research.

GBP/AUD is advancing but the Aussie unit is holding its own against the U.S. Dollar and AUD/USD is firmer on the day at 0.7268.

As shown in the above, GBP/AUD respects an inverse relationship to AUD/USD, a result of the significant influence posed by the U.S. Dollar on global financial assets.

Should AUD/USD remain supported then limits to GBP/AUD upside can be expected over coming days; certainly the 2021 highs at 1.9154 reached back on August 20 will remain elusive with out a deeper dive in AUD/USD.

The Australian Dollar is generally in a consolidative mood at present, although analysis from Karen Jones, Head of FX and FI technical research at Commerzbank shows "downside risk remains".

"The market recently failed at the 4-month downtrend at 0.7409 and we will retain a negative bias while capped here," says Jones. 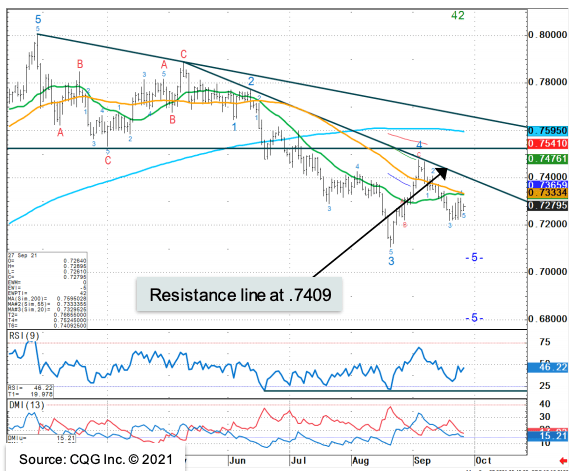 But Mark McCormick, Global Head of FX Strategy at TD Securities says he continues to anticipate a rebound in the Australian Dollar, telling clients last week to 'go long' against its New Zealand counterpart.

"While it is clear that the market has priced in the divergence between the RBA and RBNZ, we believe the price action has run ahead of the local and global drivers," says McCormick.

For the Australian Dollar the domestic scene looks quiet this week with no major economic events on the calendar.

Australia's acceptance that the zero-Covid strategy is no longer feasible (this is at least the acceptance in New South Wales and Victoria) has taken the sting of the Delta wave out of the Aussie Dollar's outlook.

Markets expect broader reopening in these two critical states to proceed in October, allowing for a stronger economic recovery into year end.

But this is largely 'in the price' of the currency and as mentioned what will dictate price action for Australian Dollar exchange rates over coming days will be the tone of global markets.

While stocks are up at the time of writing it must be observed that notable headwinds to sustained gains are in place.

Of particular concern is the ongoing global supply chain squeeze that has resulted in surging shipping costs.

Growth concerns are particularly focussed on China which is by no means immune to the Delta variant of Covid, meaning lockdowns are being imposed on major cities and regions on an ad-hoc basis.

"Beijing has been increasingly policing emissions to cut China’s energy intensity by 3% in 2021. Only 10 of 30 regions achieved their emissions goals in 1H 2021," he explains. "Power shortages have been triggered as coal supplies are limited and prices of thermal coal skyrocket."

"7% of aluminium and 29% of national cement production capacity has been affected," says Meyer, "Analysts have slashed their growth expectations for China’s 4Q 2021."

Indeed, Tesla and Apple have both already limited their Chinese production capabilities.

The susceptibility of the Australian Dollar to sentiment linked to China was on display last week when mega property developer Evergrande Group found itself on the edge of default, with little indication Chinese authorities would provide a lifeline.

Evergrande is not expected to pose a systemic risk to the Chinese or global financial systems but the episode does suggest the country's infrastructure-lead economic boom might have passed.

This downside risks for Australia's resource heavy export sector and, ultimately, its currency.