The future of the mega developer has been questioned amidst claims it would be unable to meet sizeable bond repayments due Thursday, leading to fears of a collapse that could spread to other property developers and Chinese institutions.

But Evergrande's European share listing surged midweek on news the company struck a debt deal over a repayment Thursday's repayment.

Shares listed in Frankfurt ruse 20%, taking the annual loss to 81%.

Evergrande Group has two interest payments due to bondholders on Thursday, one for $83.5MN and one for CNY 232MN.

Evergrande said in an exchange filing on Wednesday that an interest payment due Thursday on one of its yuan-denominated bonds "has been resolved via negotiations off the clearing house."

Wilson says aiding risk sentiment - to which the Australian Dollar is particularly sensitive - was news that China's central bank had boosted the injection of cash into the Chinese monetary system, in an effort to shore up confidence.

"The reopening of Chinese markets after the long weekend passed without a hiccup after the PBoC injected net 90bn yuan liquidity and Evergrande announced that it will make the yuan coupon payments tomorrow after negotiating with onshore bondholders," says Broux.

The Pound-to-Australian Dollar exchange rate fell a quarter of a percent to trade at 1.8838 at the time of writing. 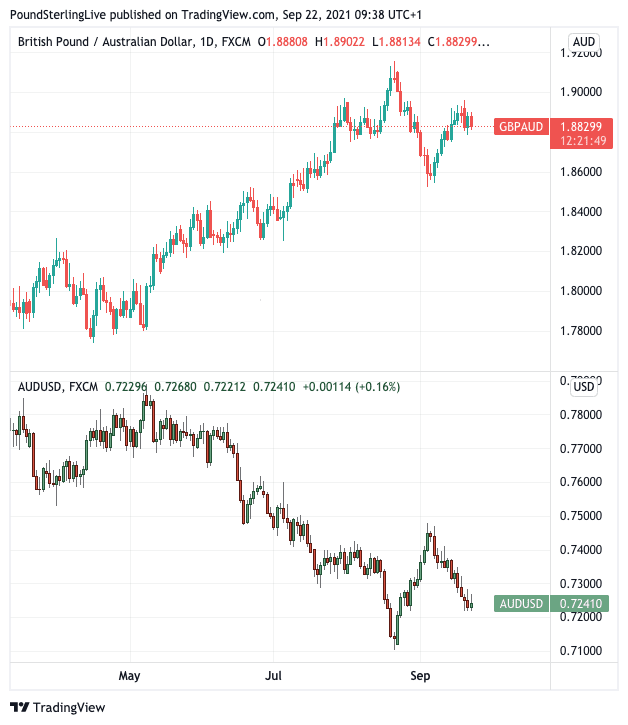 Markets in China have been closed over the past two days, ensuring global stock markets acted as the shock absorber to recent concerns over China's property sector and associated debt bubble fears.

The Australian Dollar was a laggard amongst the world's major currencies at the start of the new week after China's Evergrande Group was seen heading for default, with little indication Chinese authorities would provide a lifeline.

The crisis is just the latest setback to Chinese economic growth that has routes in a wider crackdown by authorities on technology stocks and the introduction of Covid-19 restrictions in some key regions and cities.

China's property and infrastructure boom has long been the primary driver of demand for iron ore, which is Australia's premier export and foreign exchange earner.

Although much of Australia has been locked down due to Covid-19 the country's economy still enjoys a robust terms of trade account - courtesy of iron ore - as a backstop.

Any easing in investor concerns over China's property sector therefore plays positive for both iron ore prices and the Australian Dollar.

"Fears that the (domestic) crisis is China's own Lehman moment are exaggerated in our view, but investors need more assurances with the real estate group owing nearly $306bn to bond holders and banks," says Broux.

The next major test for the Australian Dollar will be Wednesday night's update from the Federal Reserve.

The Fed is expected to offer up its view on the recent slowdown in U.S. economic activity while detailing plans to end its quantitative easing programme.

Current expectations are for the programme to be tapered starting in either November or December.

The real market moving event will however be updates to the Fed's interest rate forecasts, communicated via a chart plotting the forecasts of each individual member of the FOMC for future interest rates.

Should these dots imply a rate rise could occur as early as 2022 then the Dollar would rise and the Australian Dollar fall.

Analysis from TD Securities details a 'hawkish' outcome that would trigger Dollar strength as being one where the median dot shows rate hikes starting in 2022 and as much as 150bp of tightening by end-2024.

Significant upward revisions to 2022 as well as 2021 inflation projections would also be delivered under this scenario.

TD Securities attribute a 25% chance of such an outcome.

There would be no definitive signal on taper timing, but economy is close to achieving the required "substantial further progress," even with some cooling in growth recently.

The base case scenario is expected to result in limited movements in FX, providing an effective status quo outcome for Australian Dollar exchange rates.