- RBA to make key call on asset purchases
- Could open the door to a stronger AUD
- But Covid cases could prompt caution
- Dovish surprise could see GBP/AUD test 1.85

The Pound-to-Australian Dollar exchange rate (GBP/AUD) has fallen into the middle of its June-July range at 1.8390, an entirely predictable move given the gravitas of the looming policy update from the Reserve Bank of Australia (RBA).

The RBA's July policy update will see Governor Philip Lowe and his team decide the future of the RBA's asset purchase programme and given the heightened market focus on the decision analysts say volatility in the Australian Dollar is possible.

"These policies help lower lending rates in the economy. They also help to produce a weaker Australian dollar than otherwise would be the case," says Besa Deda, Chief Economist at St. George Bank in Sydney.

Therefore, a strong signal that the RBA is planning to exit its unconventional monetary policy stance will be interpreted by investors as being supportive of the Australian Dollar and could put GBP/AUD under some pressure. 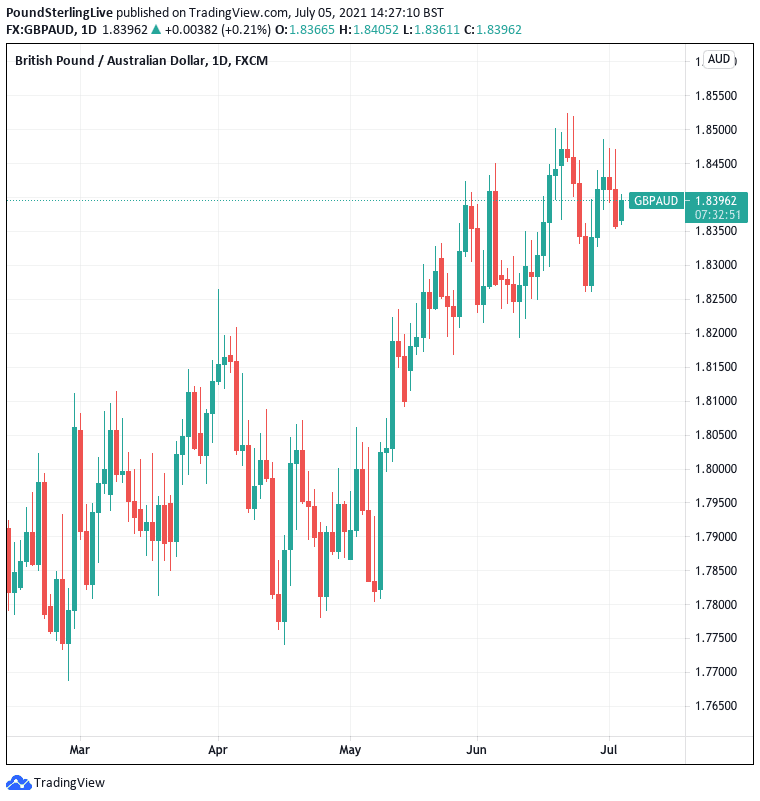 Above: The GBP/AUD has settled into the middle of its recent range ahead of the July RBA call.

The RBA decision however comes with the country's most populous state remaining in lockdown and with other states maintaining a high vigilance to further outbreaks of Covid-19.

The economic cost of the latest series of Covid measures - that saw areas of Queensland, the Northern Territory and Western Australia lock down - will not be lost on the RBA.

Economists at St. George Bank estimate that the two-week lockdown in New South Wales alone will cost the economy around A$750 million a week, and possibly as much as A$1 billion a week, provided the lockdown is relatively short.

A longer lockdown will have a bigger impact say economists.

Should the Covid situation prompt an air of caution amongst RBA policy makers then the Australian Dollar could lose ground against its peers.

"Consumers and businesses are grappling with the uncertainty of how long it will take for this outbreak to be contained in New South Wales and for restrictions to ease," says Deda.

The weekly Roy Morgan consumer confidence survey showed confidence fell 4.6% in Sydney in the week ended June 27, which captured only some of the lockdown.

But beyond the short-term the Australian economy remains buoyant and some economists warn that ultra-low interest rates and quantitative easing (the buying of government bonds to support the economy) are not consistent with an economy with such a bright outlook.

Employment is a key indicator of economic health observed by the RBA: In February the unemployment rate was 6.4% and the RBA's Statement on Monetary Policy (SOMP) forecast that it would be 6.5% by the time of the July update ahead of 5.5% in June 2022 and 5.25% by June 2023.

The unemployment rate is already back down at 5.1%.

The RBA therefore faces something of a balancing act on responding to strong labour market statistics and uncertainty over the domestic path of the pandemic, which could ultimately open the door to some currency-moving surprises.

"We expect that the RBA will likely want to avoid being seen as an early adopter of tapering in order to avoid any upside pressure on the exchange rate. If the Bank does decide on a more flexible approach to asset purchases, Lowe is likely to trend carefully to communication the central bank’s dovish credentials," says Jane Foley, Senior FX Strategist at Rabobank.

The asset purchase programme sees it control the cost of finance in the economy, ensuring it remains low enough to keep businesses investing and consumers spending, thereby protecting against any economic slowdown.

One method of keeping borrowing costs low sees the RBA buys bonds to keep the yield paid on the government's three-year bond at 0.10% in a programme called Yield Curve Control (YCC).

Keeping the yield on this bond low is important given much of Australia's lending system is structured around it.

The bond currently being targeted is the three-year bond that expires in April 2024.

The first major decision for the RBA will be whether or not to keep targeting the April 2024 bond or move on and target the November 2024 bond.

St. George Bank anticipate the RBA will keep its target pegged to the April 2024 bond.

"If the peg were extended to the November 2024 bond, it would imply the RBA does not intend to increase the cash rate until 2025, which is too late given the robust economic conditions," says Deda.

The market tends to agree with this call with Marshall Gittler at BD Swiss Group saying the impact of such a decision could be positive for Australian Dollar valuations, although he suspects the decision is in the market already.

A decision to target the November 2024 bond would therefore come as something of a surprise to the market and could well trigger Aussie Dollar weakness, which could in turn allow GBP/AUD to rally back towards its 2021 high just above 1.85.

The quantitative easing programme (the second element of the asset purchase programme which was only introduced in November 2020) meanwhile sees the RBA buy A$5BN worth of government bonds per week with maturities of 5 to 10 years over a period of about six months.

The value of purchases will total A$100 billion and it is due to expire in September.

"The RBA needs to decide whether to extend this programme and if there is an extension, what form this extension might take," says Deda.

St. George Bank anticipate the quantitative easing programme will be extended but they join the market consensus in anticipating the RBA will adopt a more flexible approach to the weekly purchase amount.

"The RBA is likely to review this program again around December. We still expect the RBA to continue the program to the middle of 2022, but the pace of purchases in 2022 is likely to be lower than in 2021," says Deda.