In particular, ANZ says the Reserve Bank of Australia's (RBA) stance on the outlook for the labour market is to be potentially challenged by a rapid fall in unemployment.

The RBA has indicated that interest rates won't rise until it has pushed unemployment down and wage growth back up to where it believes it should be.

"Despite the stronger outlook for output and the labour market, inflation and wages growth are expected to remain low, picking up only gradually," the RBA said in its May policy statement.

Current RBA labour market projections leave them communicating that a rate hike in Australia is "unlikely to be until 2024 at the earliest".

ANZ says this expectation on when the first interest rate rise might occur reflects the expectation of a decelerating pace of labour market improvement, particularly in 2022.

But ANZ says the performance of the labour market in 2021 is leaving expectations "in the dust".

"We have now significantly upgraded our labour market outlook and are forecasting the unemployment rate to drop sharply to 4.8% by Q4 this year," says Catherine Birch, Senior Economist at ANZ.

The RBA meanwhile forecast the unemployment rate at 4.5% by the end of 2022 and then holding at this level out to mid-2023.

"If wages growth accelerates faster than anticipated, which is a real possibility given the particular circumstances of this cycle, such as closed borders, then the current expectation for the cash rate could well need to be brought forward," says Birch.

From a foreign exchange market perspective, expectations for when interest rates might rise at the RBA have implications for the Australian Dollar.

Analysts say that should the RBA bring forward its expected timing of an interest rate rise, the Australian Dollar would find upside support. 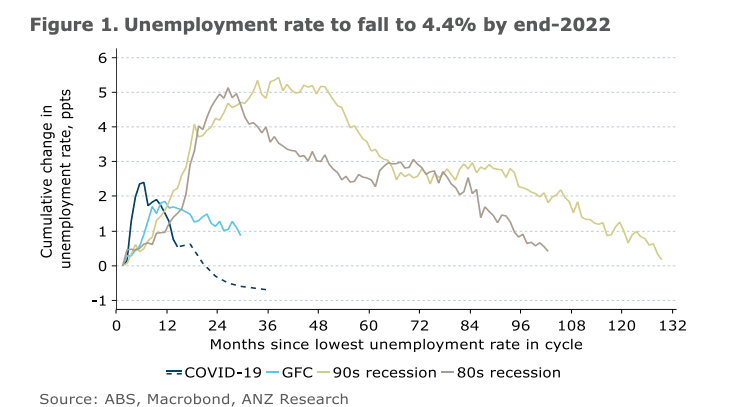 Currently the Australian Dollar has been bid higher on surging commodity prices and a general 'pro risk' sentiment amongst global investors.

However a missing leg of support for the currency is the RBA's 'dovish' policy stance, which largely rests on the view the the labour market must recover further before rates are raised.

But should the RBA respond to an improved labour market and introduce a more 'hawkish' tone - i.e. indicate that the time for rate rises might be approaching, then the the Aussie Dollar might find further support.

ANZ says they expect the Aussie labour market improvement to be faster than previously anticipated owing to overall employment growth not slowing down as the full-time employment recovery caught up to part-time.

They also note short-term leading indicators suggest robust employment growth will continue, despite the end of JobKeeper on 28 March.

ANZ's data on job advertisements has been found to be a consistently accurate guide to how the broader market is performing. 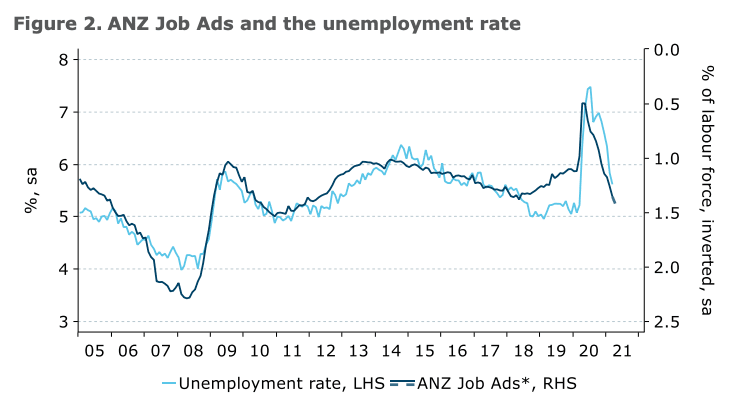 Job Ads for April was up almost 28% on its pre-pandemic level, suggesting the unemployment rate could fall to 5% sooner rather than later.

The Australian government is meanwhile observed to be offering supportive policies that will likely help unemployment continue lower.

ANZ cite Treasurer Josh Frydenberg as now wanting "the unemployment rate down to where it was prior to the pandemic [around 5%] and then even lower. And we want to see that sustained.”

This is a marked shift from the previous objective of switching focus to fiscal repair once the unemployment rate was "comfortably below 6%".

Risks to ANZ's bullish stance include the country's lacklustre vaccine rollout, which could in turn contribute to borders being closed for longer than expected.

"In our March forecast update, we assumed that international borders would start reopening from early 2022, but this timeline now looks as if it will be pushed back, particularly given the underwhelming pace of Australia’s vaccine rollout," says Birch.

"Genuine skills mismatches – many due to closed international borders – could slow the labour market expansion," she adds.