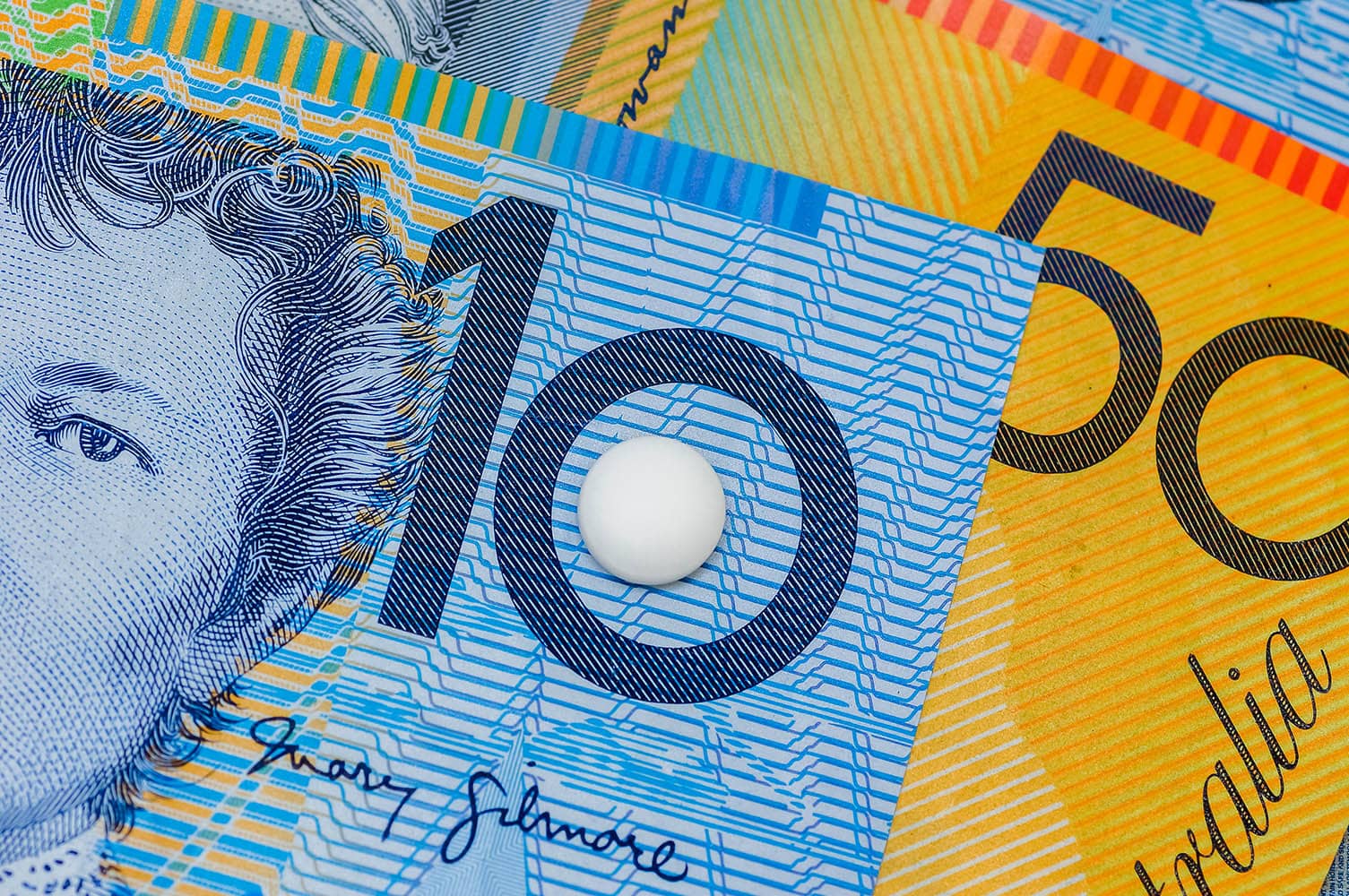 The Australian Dollar may now be facing an arduous journey back to 2021 highs without further gains for EUR/USD, owing to the combination of an elevated trade-weighted exchange rate and advent of Reserve Bank of Australia (RBA) FX interventions.

Australia’s Dollar lagged other major currencies for a second session on the bounce after being beaten back from the 0.78 level against the Dollar earlier in the week, but durable upside could now depend on developments elsewhere in the currency market and notably, in relation to the Euro-Dollar rate.

This is in no small part because RBA policymakers have seemingly developed an appetite for FX interventions as a means of preventing Australian Dollar bulls from undermining the bank’s pursuit of its 2%-to-3% inflation target, which has not been met sustainably since before 2014.

"The minutes suggested the RBA was more upbeat on the economy but still expects soft inflation outcomes for several years," says Matthew Bunny, an economist at St George Bank, in reference to minutes of the RBA’s April board meeting that were released this week.

Australia’s economic prospects have brightened of late and given the RBA tentative hope that it could see the inflation target sustainably achieved some time in 2024, but with the trade-weighted Aussie already at multi-year highs, further upside may be limited in the short-term. 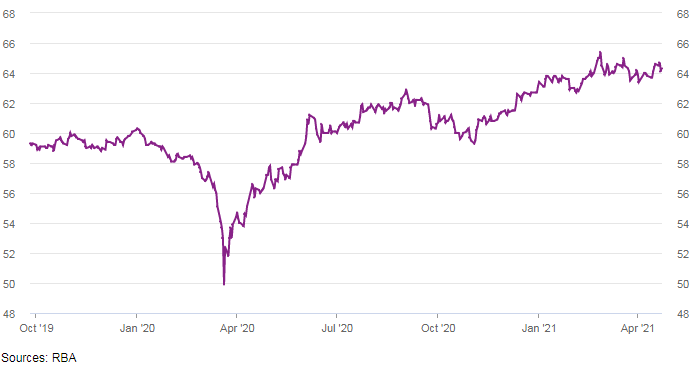 Australian Dollar strength, when measured against currencies of the country’s largest trading partners, can undermine the RBA’s inflation objective because it leads import prices to fall and these declines can have a knock-on effect on consumer price inflation.

The RBA has cut its interest rate to a new low of 0.10% and launched a maiden but since-expanded quantitative easing programme under which it buys government bonds in a bid to reduce financing costs, support the economic recovery and ultimately deliver its inflation target.

This is in addition to the nascent advent of direct intervention in the FX market.

The implication is that without a decline in the trade-weighted Aussie, AUD/USD’s journey along recovery road will be a long and arduous one if late February highs near to 0.80 are to be seen again and even more so in the absence of a steep recovery for the Euro-to-Dollar rate.

"The European Union is now catching up with the US vaccination rollout, with more Covid-19 vaccines to be made available; it is supportive of the EUR and the CNH given its long-held tight correlation with the single currency," says Qi Gao, an Asia FX strategist at Scotiabank.

A higher Euro-Dollar rate is a prerequisite for Asian central banks if they’re to allow their own currencies to strengthen against the U.S. Dollar, which is in turn necessary for deflating the trade-weighted Australian Dollar.

It may also be the case that a lower USD/CNH is key to an uplift for the Euro and broader increase for Asian currencies, account for more-than 60% of the trade-weighted Australian Dollar, with the Chinese Renminbi, Japanese Yen, South Korean Won and Singapore Dollar having the largest weightings within the basket. 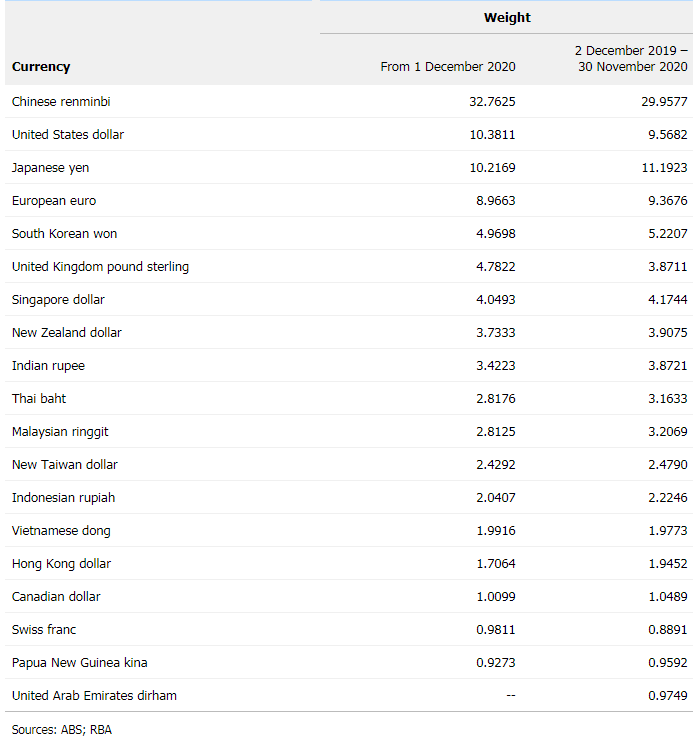 The Aussie is relatively unchanged against the Renminbi this year but higher when compared with the Yen, Won, Singapore Dollar and many others within the basket.

The export-heavy Eurozone economy and European single currency are titanic parts of trade-weighted exchange rates in Asia, hence the Euro’s crucial role, although the good news for the RBA is that these necessary price moves may now be in the process of playing out.

Europe’s single currency has bounded back from multi-week lows in recent weeks while USD/CNH has not only turned lower but also fallen through a key support level which analysts at Scotiabank see as a key single that further gains could be likely for the main Renminbi exchange rate. 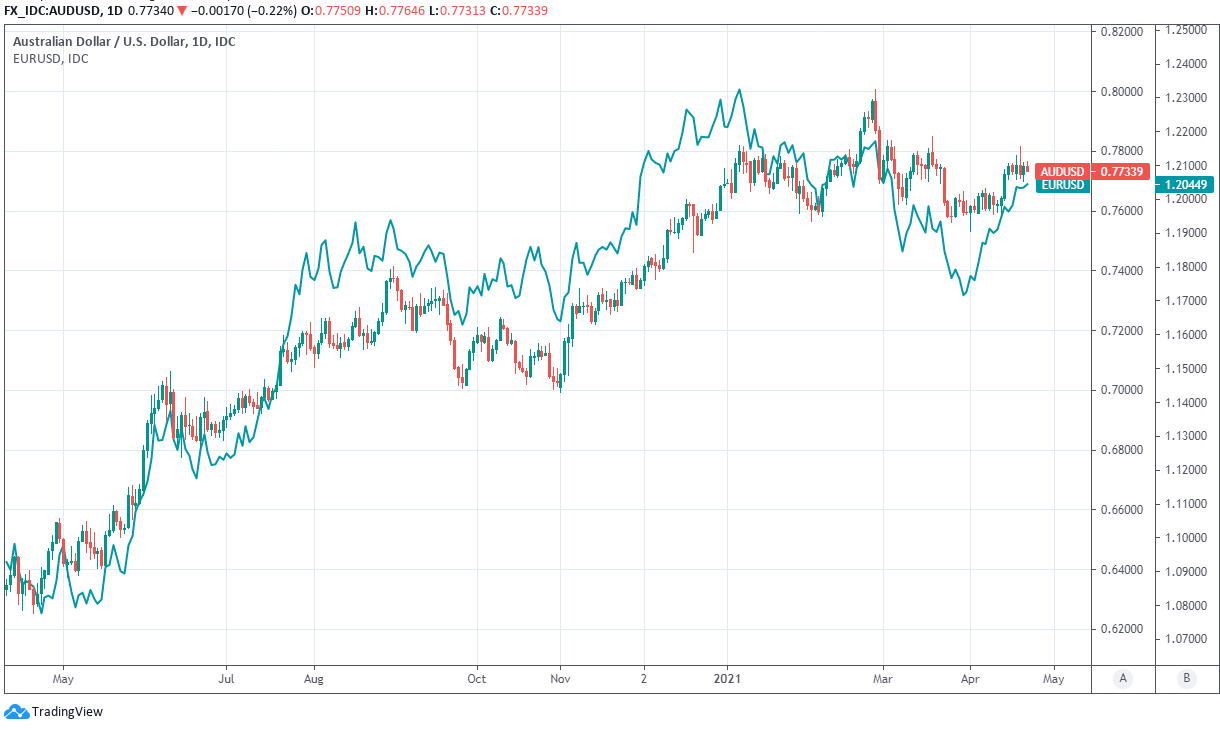 Above: AUD/USD shown at daily intervals alongside Euro-Dollar rate (green).

Meanwhile, and over in Europe, strategists at ING see the Euro having scope to extend gains over the Dollar in the coming weeks.

“After the very tough first quarter, EUR/USD continues its recovery, eyeing the 1.21 level. Despite the EUR/USD rebound this month, the pair still screens undervalued by around 1.5% based on our short-term financial fair value model. This suggests limited constraints for further EUR/USD rises in coming days and weeks,” says Chris Turner, global head of market and regional head of research at ING.