- AUD outperforms ahead of weekend, with gains over all majors.
- But strength limited as USD sellers celebrate Independence Day.
- While RBA decision looms, risking a softer AUD in days ahead.

The Australian Dollar was outperforming major rivals on Friday but gains were limited as risk assets ebbed in what was also the beginning of a holiday weekend for Americans, which comes as the next Reserve Bank of Australia (RBA) policy decision looms in the week ahead.

Australia's Dollar outperformed major rivals even as commodities softened and stock markets slipped one-by-one into the red in the final session of the week.

Americans were prolific sellers of the their Dollar this week with U.S. trading hours seeing the broadest and steepest losses while the Aussie has been a beneficiary, so antipodean gains could be limited this Independence Day.

More so given the weekend may also bring further adverse geopolitical and coronavirus developments, which have competed for investor attention this week with vaccine hopes and signs of a global economic recovery, in a market that has mostly been good to stocks and the currencies that follow them.

The Resere Bank of Australia will join the growing second wave of coronavirus in the U.S. and rising tensions between China and others in the world as a possible headwind for the Australian Dollar next week.

"We would expect more of a protest from the RBA if the AUDUSD threatened to sustain a move above 0.70, but doubt this would prompt a policy response," says Adarsh Sinha, a strategist at BofA Global Research. "The AUD TWI is roughly 5% undervalued relative to its long-term equilibrium level. This is hardly extreme from a historical perspective (well within one standard deviation) but is consistent with limited objection from the RBA." 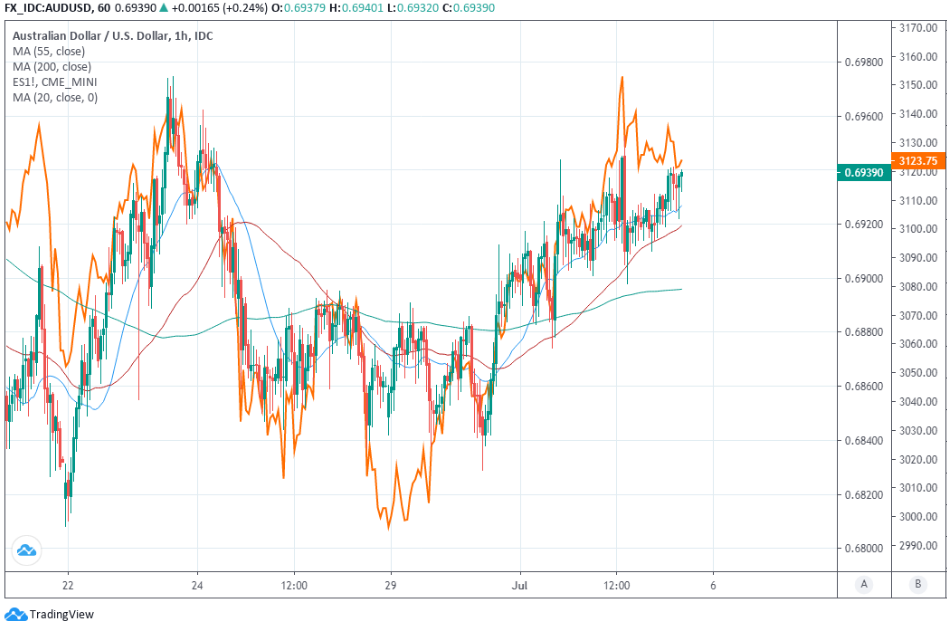 The Antipodean currency unit has risen a further 4% against the greenback since the RBA's last policy update in June, taking AUD/USD's total gains from the March trough to 26.2% if Friday's 0.6930 price level is taken as the endpoint rather than the peak of 0.7068 that was seen on June 10.

Those are exchange rate movements that risk fostering a disinflationary trend that would make attainment of the RBA's consumer price growth target less likely even without a still-live coronavirus pandemic having cratered the global economy in the second quarter before constraining the recovery in the third.

"It is unlikely the currency will be a feature in current commentary, given AUD/USD remains below 0.70," says Rahul Khare, an FX analyst at ANZ, which has a neutral outlook for AUD/USD next week. "Improving news and some suggestions that the pandemic may have reached its peak have seen the AUD outperform. Its medium-term prospects are likely to hinge on how fast activity can resume and how well economies cope with resurgences in case numbers." 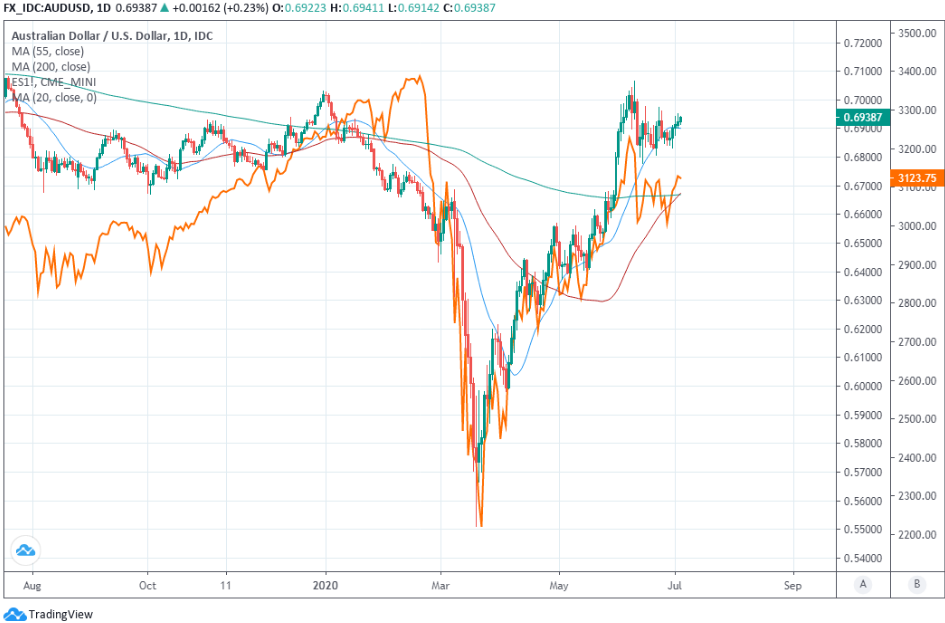 The RBA announces its July policy decision at 05:30 London time Tuesday and markets are looking for the benchmark of borrowing costs to be left at its new record low of 0.25%, with no changes to the yield curve control policy either.

Such an outcome would be what analysts call a non-event for the Australian Dollar although antipodean exchange rates would be forced onto the back foot if bank follows its Kiwi counterpart in protesting against currency strength, more so if Governor Philip Lowe threatens some kind of corrective intervention.

Currency complaints would weigh on AUD/USD even without any U.S. coronavirus or geopolitical burdens and would help to stabilise the Pound-to-Australian Dollar rate withouth matching declines in GBP/USD. 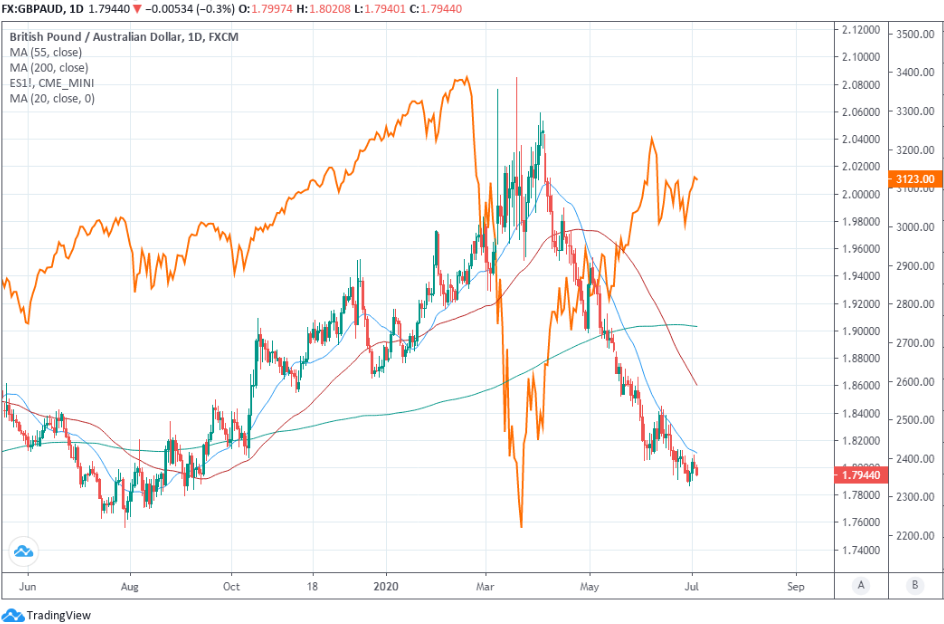 "It is possible that the upcoming rate meeting looks to talk up some of the possible downside risks to the economy and policy choices to keep the AUD from moving too much higher, though global market sentiment and appetite for the AUD and Australia's commodity exports could shortly turn for the worse if Covid-19 flare-ups in the US and elsewhere do not begin to turn back down again," says Francesco Pesole, a strategist at ING. "The role of a weaker AUD as a shock-absorber for the Australian economy is non-negligible, and the fact that neighbouring Reserve Bank of New Zealand is directly addressing a strong NZD as a hindrance to economic recovery is a case in point...Lowe may want to implicitly walk back from the message that the RBA is quite relaxed about the current AUD levels."

Pesole said Friday that any complaints about the currency would elicit a negative reaction from Australian exchange rates but one that is "relatively limited in size, in line with the reaction after the last few meetings." This means Sterling would likely need more than currency concerns at the RBA for the Pound-to-Australian Dollar rate to experience anything more than momentary relief from the selling pressures that drove it -13% lower last quarter.

Sterling has underperformed larger rivals since the coronavirus first landed in Britain but relative to the Australian Dollar it's gone from boom-to-bust in spectacular fashion after initially benefiting from risk-aversion and the resulting suffering of the Aussie in late March. Losses have resulted from fresh deadlock in the Brexit trade talks as well as the comparatively worse coronavirus situation in the UK, although forecasters remain bearish in their outlooks.

St George Bank forecast a period of stability being in the pipeline on Thursday, with Sterling seen remaining around Friday's 1.79 level until the end of September although the lender looks for a fall back to 1.7636 in time for year-end. But those moves are expected to give way to even further losses next year, taking Sterling down to 1.7301 by June 2021.

Westpac forecasts 1.7543 in time for year-end while Commonwealth Bank of Australia looks for 1.7361 before the curtain closes on 2020.