The Pound-to-Australian Dollar has lost significant value since late-March highs just above 2.05 were recorded, with the pair slipping into reverse gear as global financial markets embarked on a recovery sequence following the cover-19 market meltdown of preceding weeks.

The exchange rate is located at 1.8128 on Thursday, placing it within striking distance of 8-month lows.

As the Australian Dollar maintains a positive correlation with equity and commodity prices, the resultant global recovery has injected significant positive momentum into the currency leaving investors to step aside and not fight the trend.

According to analysis of the GBP/AUD exchange rate's daily chart conducted by Trading Central, "the downside prevails as long as 1.8838 is resistance". Only a break back above 1.8838 would invalidate the downtrend, a scenario that looks to be remote at present.

As the downside is a preferred scenario, Trading Central locate potential downside targets at support levels located at 1.7779 and then 1.7492. 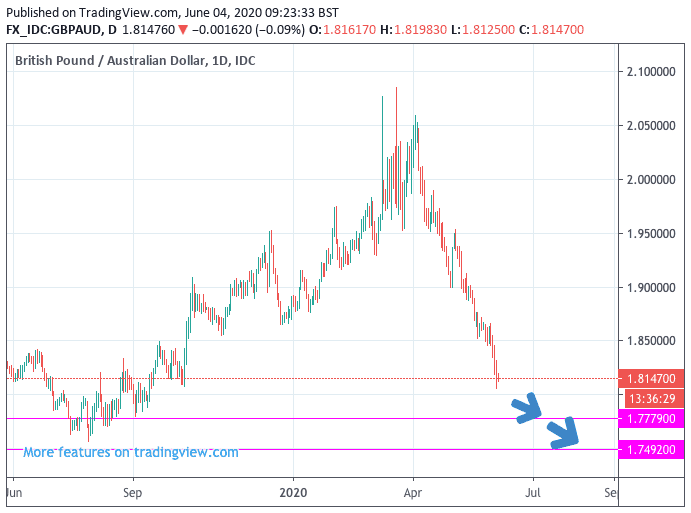 One point of caution is that the Relative Strength Index (RSI) on the daily chart is below 30: this indicator gives a good indication of momentum and exhaustion. If the RSI reads below 50 it signifies that momentum in a given financial asset is negative. But, when the RSI slips below 30 the move is considered to be running too hot, as it is noted the RSI rarely stays below 30.

The implication is therefore that the sell-off could be due a pause in the near future, to allow the market to catch up with itself.

"It could either mean that the pair is in a lasting downtrend or just oversold and therefore bound to retrace (look for bullish divergence in this case)," says Trading Central.

Further indications of negative momentum are identified as a MACD reading which is negative and below its signal line.

The Australian Dollar's run higher has paused in line with a softer tone to global markets on Thursday.

"The mood in equity markets remained positive yesterday, with S&P 500 (+1.4%); Nasdaq (+0.8%) both finishing higher, as investors focused on the potential economic recovery rather than the ongoing protests. This morning the tone is more muted," says a briefing note to clients from Petronus Partners. "Tensions between the US and China remain, with the Trump administration moving to block Chinese airlines from operating in US airspace."

Commodities remain a key driver to the 'commodity currency' bloc, to which the Australia and New Zealand Dollars are included.

A bellwether for the sector is oil, which slipped in value over the course of the past few hours owing to a a lack of agreement among producers on the extension of supply cuts.

Brent Crude fell back below $40 a barrel.

But it is perhaps dynamics in the iron ore market that are more important for the likes of the Australian Dollar, whose value is linked with to the export of iron ore to China.

Iron ore prices have been on a tear higher over recent weeks, thanks to strong demand from a rebooted China and severe supply constraints out of Brazil. This has left an open goal to Aussie ore exporters, which has aided the currency higher.

However, we have seen iron's sharp rally fade over recent hours, and we wonder whether this could be behind a pause in the Australian Dollar's uptrend. Regardless, we note the market to be in a bull run and we would expect further gains to emerge, particularly as the rest of the global economy follows China in recovery.