The Pound-to-Australian Dollar exchange rate fell a further half-percent to trade at 1.8137 in mid-week trade, as a multi-week rally in the Australian Dollar shows no signs of fading thanks to a combination of positive technical momentum and a fundamentally supportive global backdrop.

The Australian Dollar is the best performer of the past week and month courtesy of a sizeable jump in global stock markets and commodity prices built on a belief that the worst of the covid-19 pandemic is now in the rear-view mirror and the global economy is on course to stage a recovery over coming weeks and months, driving investors to snap up discounted assets.

The positive rally in the 'risk on' financial class - which includes stocks, commodities and the Australian Dollar - was on Wednesday fuelled by some better than expected data out of China, where the Caixin services PMI jumped to 55.0 in May, from 44.4 in April, which is well above the consensus expectation for 47.3 to be reported.

The data suggests the Chinese economy is well on the road to recovery, and this bodes well for commodity demand and the Australian economy which has significant export exposure to China.

"The headline spike in May was fairly broad-based, with both the output and new orders components surging to their highest levels in a decade. Domestic demand continued to do the heavy lifting, though, as new export orders remained in the red," says Miguel Chanco, Senior Asia Economist at Pantheon Macroeconomics. "It appears that China no longer is facing a lingering threat of mini-virus clusters escalating uncontrollably, as the authorities have been quick to mass test and tamp down on potential hotspots. This should support a steady recovery in services." 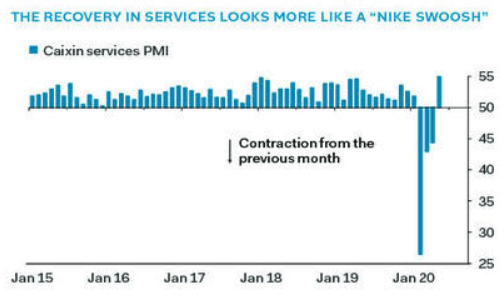 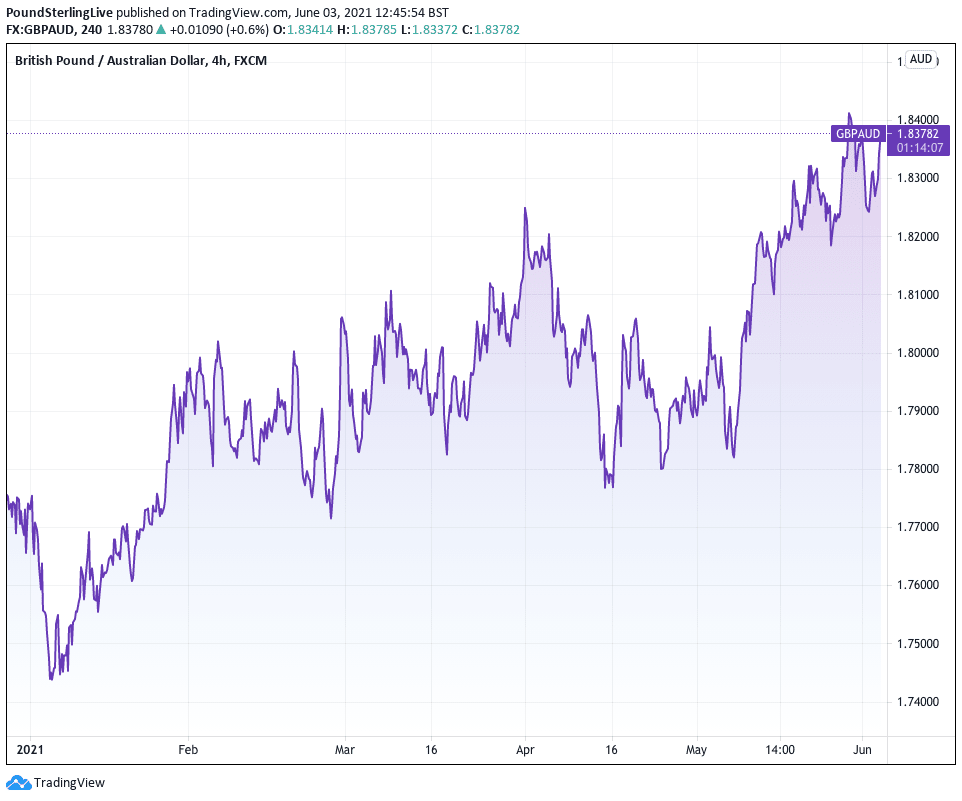 "The Australian Dollar has found itself on an upwards march," says Sebastien Clements, currency analyst at international payments company OFX. "Since the beginning of the pandemic, the U.S. Dollar’s safe haven status has seen it outperform all other major currencies, but these gains are withering as risk appetite globally improves and investors look to riskier assets once again."

As long as the global equity recovery story continues we would expect the Aussie Dollar to maintain a trend of appreciation.

Mazen Issa, Senior FX Strategist at TD Securities says "the FX market is very much just an equity trade. Correlations are very tight and stable, particularly among the usual suspects. Here, AUD/USD has been on fire, with the pair breaching 200dma resistance".

The implication is that the Australian Dollar now looks set to establish a new and higher trading range which Issa says is broadly marked by 0.67/0.70. 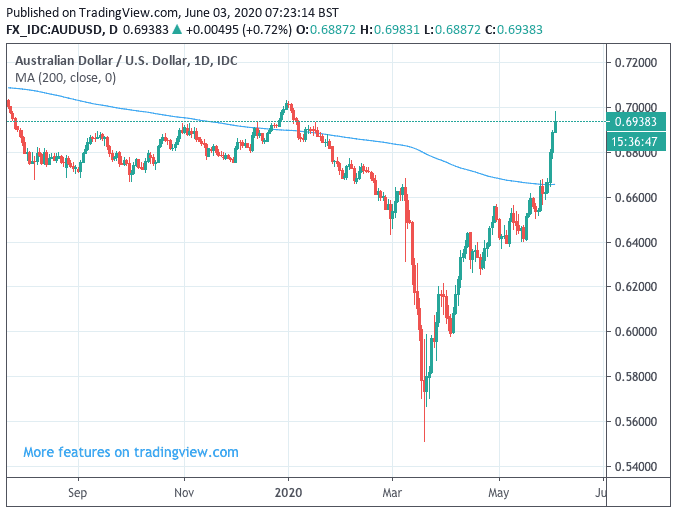 "This will become more more convincing if AUD/USD can manage to hold above that 200dma this week. In many ways, AUD is at the nexus of everything right now. On the one hand, you have AUD strength/long equities. On the other, you have weaker CNH/China tensions," says Issa.

Some financial market commentators have expressed surprise as to why the civil unrest in the U.S. has not been felt by stock markets and currencies, expecting some negativity to be shown. What they fail to consider is that the domestic disturbances appear to have consumed President Donald Trump's attention, meaning the steady flow of rhetoric on China that we have become accustomed to has ceased somewhat.

Therefore, a lack of headlines surrounding U.S.-China tensions have allowed some positivity to return to global markets and is allowing assets like stocks, commodities and the Aussie Dollar a free pass higher.

We would expect this rally to however be challenged when tensions start to rise again, which we see as highly likely given Trump will want to pursue a competitive approach towards China ahead of the November presidential election.

"With risk-on sentiment dominating, AUD had one of the sharpest moves I can remember recently. Hedge funds, retail, and real money accounts were all buying," says Gittler.

The rally in the Aussie Dollar flies in the face of the release of GDP data from the Bureau of Statistics which shows Australia's economy shrank 0.3% in the first quarter, amid bushfires and the early stages of the coronavirus pandemic.

The big fall in GDP in the current June quarter - that will take account of the brunt of the covid-19 lockdown - will mark Australia's first technical recession in 29 years.

Despite the GDP print, the Reserve Bank of Australia (RBA) this week struck a relatively optimistic tone regarding the outlook when they released their June policy decision.

"It is possible that the depth of the downturn will be less than earlier expected," said the RBA in a statement.

A relatively optimistic domestic picture is tipped by Gittler to provide ongoing support to the Aussie Dollar:

"The RBA has been one of the less dovish central banks – it has ruled out negative rates and has already started reducing its balance sheet from the peak. Thanks to its success in achieving its yield control target, it’s only had to buy bonds once in the last month. Australia (and New Zealand) are successfully emerging from lockdown, with few new virus cases (90 new cases in the last week for Australia – not bad for a country of 25mn people - and none at all for NZ)."