The Australian Dollar tanked Thursday and is tipped for more losses ahead after the October jobs report revealed a surprise increase in the jobless rate that has incited fresh bets the Reserve Bank of Australia (RBA) will cut its cash rate again before long, and brought 'quantitative easing' (QE) a step closer.

Australia's economy shed 19k jobs last month, leading the unemployment rate to rise from 5.2% to 5.3% in October, when markets had looked for a 16.2k gain to keep the jobless rate steady at its prior level. The data will not be welcomed by the RBA, which has cut Australian interest rates three times this year in the hope of fostering the 'full employment' and faster economic growth the bank says it needs to get inflation back within the 2%-to-3% target band.

"The market has now eroded the near term uptrend at .6930 and the 55 day ma at .6813 to leave the market vulnerable to further losses to initial support at .6724 the 16th October low ahead of the .6671 October low," says Karen Jones, head of technical analysis at Commerzbank. 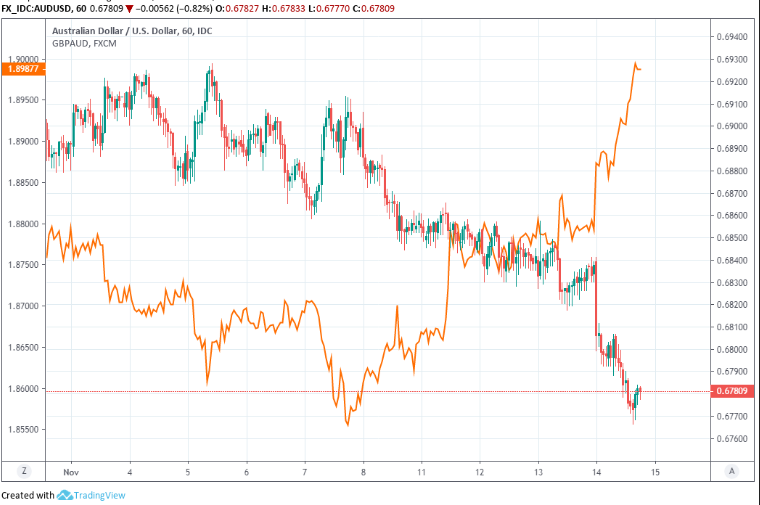 Thursday's data was followed by dire retail sales and industrial production figures from China, which are also important to the Australian economic and currency outlook given the two countries' significant trade with each other. Chinese retail sales grew by an annualised 7.2% in October, down from 7.8% previously and beneath the market consensus for an unchanged rate of expansion. Industrial production grew by 4.7%, down from 5.5% and also beneath the unchanged 5.5% reading that was anticipated.

The RBA said this month it would "wait and see" what the effects of its past rate cuts are before taking any further action, leading the market to believe it could be February before the bank cuts rates again. And a surprise decision this Wednesday from the Reserve Bank of New Zealand to leave the Kiwi cash rate on hold until then had reinforced that bias heading into Thursday's labour market release and lifted the Aussie in the prior session.

"We've seen a decent amount of AUDUSD selling at the lows which has been easy to do. It's interesting that AUD couldn't rally much last week despite the equity rip/China news and the UBS Strategy team has done work on the fact that Australia is no longer a true China proxy. After the jobs number, we saw very little and now everyone piling in down here with a February rate cut basically priced. Not sure it's worth chasing," says Matthew Lee, U.S. head of FX spot trading at UBS, in the noon hours Thursday. 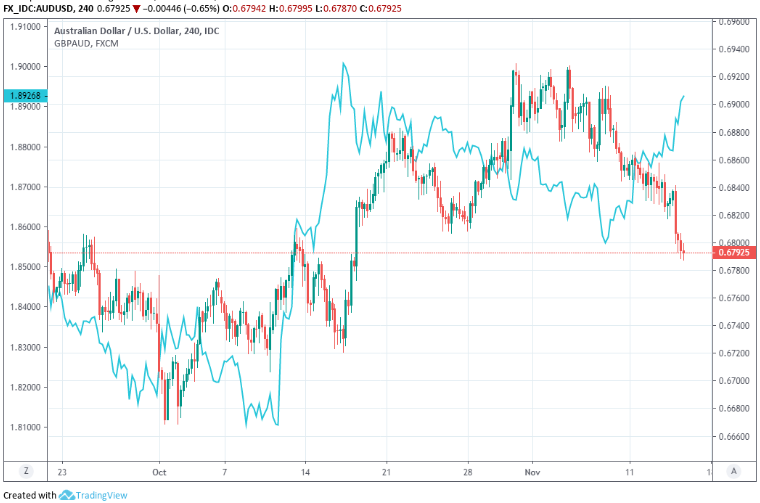 Australia's Dollar was in retreat, and the Pound-to-Aussie rate closing in on a fresh 2019 high, because the RBA has made the jobs market an important driver of its interest rate decisions. It hinted strongly in September that it's targeting 'full employment', otherwise known as 'non-inflation-accelerating-rate-of-unemployment', after saying in February that a "sustained" rise in unemployment that compromises the inflation outlook would force it into action. The jobless rate has since risen from 4.9%.

"AUD can move lower towards its 17 October low of 0.6753 over coming days as market participants increase expectations for additional RBA rate cuts," says Kim Mundy, a strategist at Commonwealth Bank of Australia. "Australian futures are currently pricing a 28% chance of a 25bp cut to the cash rate in December, up from around 15% yesterday.  However, we expect the RBA will remain on hold for the remainder of 2019 (to fully assess the impact of recent rate cuts) before cutting the cash rate by 25bps to 0.50% in February 2020."

RBA policymakers downgraded their forecasts for wages in the coming years last week and now anticipate that pay growth will pick up just 0.1%, to 2.3%, in the years to the end of 2021. Wages grew at an unchanged annualised pace of 2.2% during the third quarter, Australian Bureau of Statistics data revealed Wednesday, although any further increases in unemployment might risk forcing that number even lower in subsequent quarters.

Pricing in the overnight-index-swap-market implied on Thursday a February 04 cash rate of 0.56% at the RBA, down sharply from 0.62% on Wednesday, which has weighed heavily on the Australian Dollar during the morning session. Commerzbank says the Aussie could be on its way back to the 0.6720 area that's not been seen since mid-October. Assuming the GBP/USD rate holds above 1.2825, the aforementioned could put the Pound-to-Aussie rate close to 1.91 and at a fresh 2019 high. 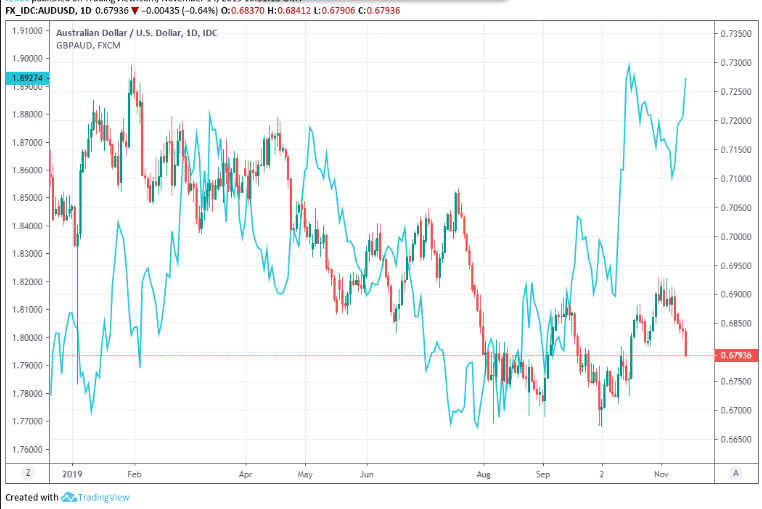 "It has resulted in the AUD/USD rate falling back below 0.6800-level which has largely reversed the relief rally from last month triggered by building optimism over a US-China partial trade deal. The relief rally ran out of steam after it failed to break above resistance from the 200-day moving average at 0.6940. It fits with our view [removed] that the Aussie remains subject to downside risks as the RBA moves closer to unconventional easing," says Lee Hardman, a currency analyst at MUFG.

The Aussie is at risk of further losses because with the cash rate already near the 0.25% 'lower bound', any further weakness in the labour market or economy could force the RBA to resort to the 'quantitative easing' that's so far been the preserve of only central banks in larger developed markets. That would see the RBA crush Australian government bond yields with regular, large scale asset purchases that would drive investors out of the market.

RBA policymakers have made frequent references to 'unconventional' policy options but remained tight-lipped about exactly what they are, although many now see the term as a byword for quantitative easing. The RBA needs to get inflation, which is sensitive to economic growth, back into the 2%-to-3% target band in a manner that can be sustained over the medium-to-long-term.

MUFG says the threat of quantitative easing is a downside risk to the Aussie but doesn't anticipate the RBA actually having to resort to it. The bank, the world's fifth largest, actually tips the antipodean unit for a gentle recovery in the year ahead although this is mostly due to a bearish view on the U.S. Dollar.