- Illusion of an agreement no game-changer for global economy.

The Australian Dollar got the better of a downward-correcting Pound Sterling Monday even as investors checked earlier optimism about an agreement struck by the U.S. and China last week, although the antipodean currency is tipped by ING and Monex Europe to cede ground to its British rival heading into year-end.

Pound Sterling, recently revived by claims of progress in the Brexit negotiations from both London and Brussels, corrected lower on Monday but is tipped to advance against a handicapped Australian cousin over the coming months as the UK navigates the path toward an orderly exit from the European Union and the antipodean unit is hampered by its central bank.

Meanwhile, the Australian Dollar bested Sterling Monday but underperformed other rivals and is expected to remain a laggard into year-end as the Reserve Bank of Australia (RBA) cuts its cash rate even further. The Aussie was on the back foot in part because of the lack of substance in Friday's agreement between the U.S. and China, which was under fresh scrutiny Monday.

President Donald Trump said late Friday the U.S. and China had reached "a very substantial phase one deal" that averts an increase in tariffs previously planned for Tuesday 15 October, which would have risked putting the already-slowing global economy under further pressure. But the rub for markets is that it will be weeks before accord, which is simply the first of a multi-phase deal, is written on paper and signed which means there's also still plenty of scope for the whole thing to fall apart. 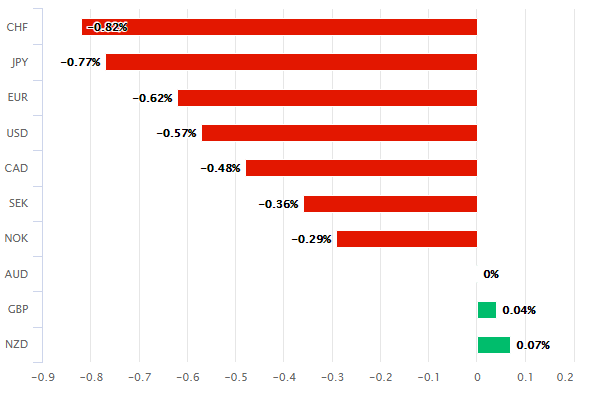 Above: Australian Dollar performance Vs major rivals on Monday.

"I think the biggest impact can be a shift in the OIS curve by one meeting ahead, but this may not have major implications for the currencies. The two central banks are likely going to keep their easing biases well in place, which will keep a lid on AUD and NZD unless a fully-fledged trade US-China trade deal is agreed, which still seems quite unlikely," says Francesco Pesole, a strategist at ING.

President Trump had threatened to lift from 25% to 30%, the tariff on $250 bn of imports from China this Tuesday and is still threatening to impose a new 15% tariff on all of China's remaining annual exports to the U.S. if it doesn't agree reforms to its "unfair" trade practices. The deal that was said to have been struck Friday partially covers key issues like intellectual property protections and exchange rate policy but there's still more to be done on those scores and other important issues also remain unaddressed.

The trade war has disrupted multinational supply chains, reduced international trade and spooked businesses. It's also slowed the global economy, particularly the trade-sensitive Eurozone, although its effects are increasingly being observed in both the U.S. and Chinese manufacturing as well as services sectors. And the shadow cast over Australia's commodity dealing and China exposed economy is long, although ING's Pesole says the domestic story will remain front and centre for the RBA.

"The RBA and the RBNZ have largely focused on the lacklustre inflation and employment numbers to justify their easing measures. Obviously, they are both taking trade tensions into account, but I am afraid that the inflation story will keep prevailing. They have probably already erred on the side of  “dovishness “ and used some of their bullets on the back of those weak inflation numbers, and one cannot exclude they will continue to do so even if the global backdrop improves," Pesole told Pound Sterling Live Monday. "AUD and NZD both remain as a quite appetible option to go long GBP against (rather than USD or EUR) if one wants to bet on a GBP-positive resolution of the Brexit gridlock." 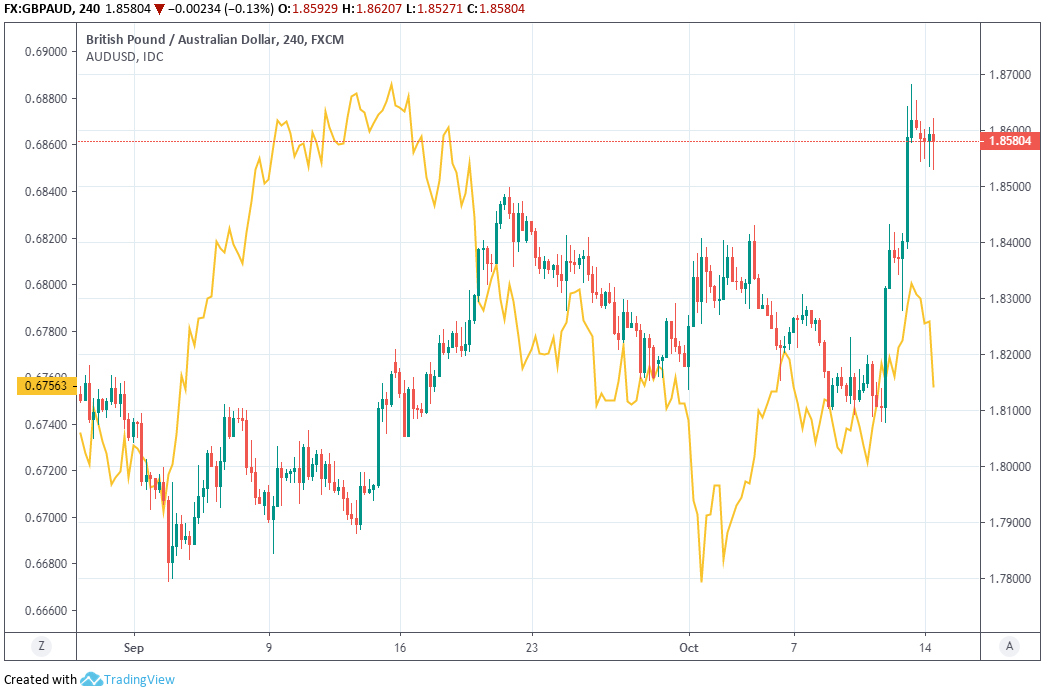 The RBA has cut its cash rate three times this year in an effort to revive Australia's inflation pulse, which has weakened further in recent quarters as the domestic economy has softened amid a bust in the housing market and uncertainty thrown up by the trade war that has impacted business confidence. And financial markets are betting heavily the bank will continue reducing its cash rate in the year ahead, which has weighed on the Australian Dollar.

Pricing in the overnight-index-swap market implied on Monday, a November 05 cash rate of 0.64%, which is below the current 0.75% but a long way off where it would be if the RBA cut the benchmark by a further 25 basis points. The rate implied for December 03 was just 0.55%, but still above the threshold that would prevail following an additional cut. Any move by the market to fully price-in another 2019 rate cut might weigh on the Aussie.

"The relatively narrow and partial deal discussed last week is hardly a sign of a resolution to the trade war so from our perspective action from the RBA and RBNZ is still likely in Q4," says Ranko Berich, an analyst at Monex Europe. "In NZ recent survey data has turned outright recessionary so if the picture worsens even another 50bp in November can’t be ruled out. The RBA is likely to be a little more hesitant given the recent improvement in manufacturing survey data. Their most recent report noted a “gentle turning point” in the economy so unless the US-China story turns utterly dire they will probably be on hold in November before cutting again in December."

Like ING's Pesole, Berich and the Monex team are optimistic in their outlook for the Pound heading into year-end because they anticipate that a 'no deal' Brexit will be avoided by the UK but that the RBA may continue cutting rates. The Pound has been dented in recent months by mounting fears among investors over the UK's path out of the EU, although last week appeared to deliver eagerly awaited but long-elusive progress in the negotiations. 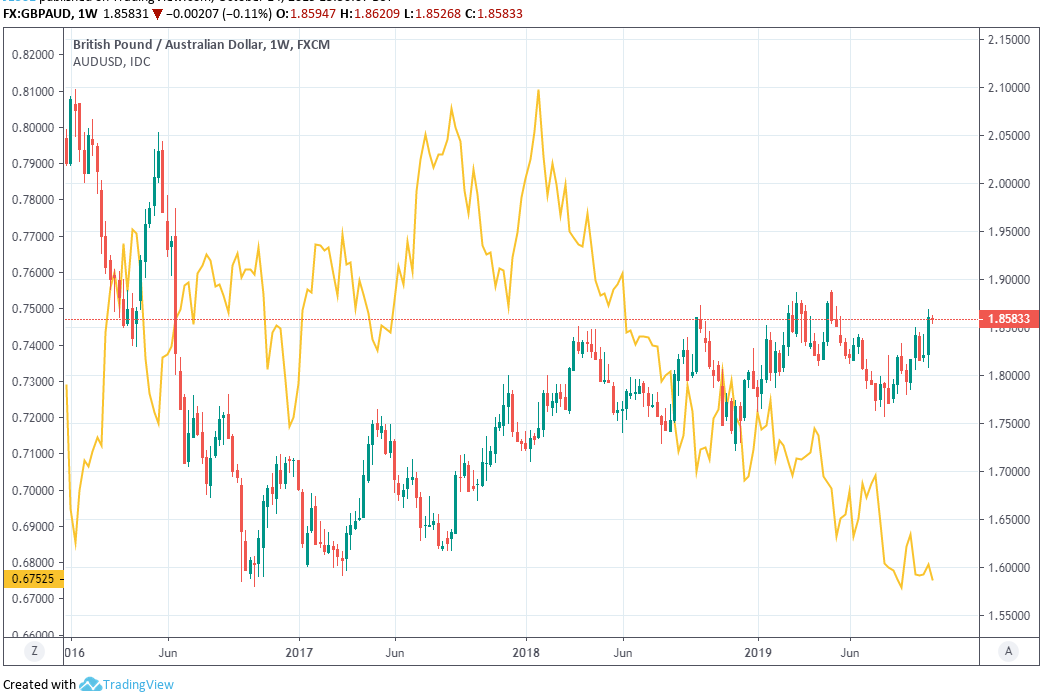 Prime Ministers of both the UK and Republic of Ireland said last week they could see a pathway toward a deal that would enable the UK to exit the European Union but avoid a 'no deal' Brexit, which many say would see the GBP/USD rate fall below 1.15 and potentially as low as 1.05. Thursday will see national leaders from across the EU meet in Brussels to deliberate on whether to accept the UK's proposals for managing the Northern Irish border after Brexit.

"Against GBP the trade war is a secondary factor at best for AUD and NZD – Brexit remains the only game in town for the pound. On the whole we are fairly constructive on sterling and think no deal will be avoided, supporting further upside against the G10 including AUD and NZD through to the end of 2019 and 2020," Berich told Pound Sterling Live Monday.

Pound Sterling was the best performing major currency last week due to hopes that a deal would be reached in time for this week's summit but EU officials have since downplayed the prospect of one being struck, leading to a downward correction in Sterling exchange rates Monday. However, if an agreement is not approved in the UK parliament before Saturday 19 the so-called Benn Act will come into force. That requires PM Johnson to request from the EU a third delay to the UK's departure.

Johnson has long claimed the UK will leave the EU at the end of the current Article 50 extension period on October 31, with or without a deal, and has maintained this stance even after parliament foisted the Benn Act on the government. In the absence of a deal this week, Saturday will reveal either that this rhetoric was all bluster, or that the Prime Minister had an ace card up his sleeve the entire time. And any request by the PM for a further Article 50 extension would be welcomed by the Pound.