- Westpac tips AUD/USD to sink back to decade low this month.

Australia's Dollar limped toward the weekend Friday after being crushed during the previous session in response to a surprise increase in the unemployment rate, which has prompted Westpac to warn of more rate cuts from the Reserve Bank of Australia (RBA) and losses for the antipodean currency.

The Australian economy created 34.7k new jobs during August, a far greater number than the 15.2k envisaged by the consensus among economists, but this wasn't enough to prevent the unemployment rate from rising by 10 basis points to 5.3%. Markets had looked for the jobless rate to hold steady at 5.2%, but an increase in the so-called participation rate drove the jobless number higher as previously 'inactive' workers re-entered the workforce.

Unemployment has now risen by 40 basis points in the last six months, from the 4.9% rate that prevailed back in February, which is a problem for the Aussie because the RBA has explicitly tied future interest rate decisions to "developments including in the labour market".

Westpac, one of Australia's four largest lenders, says this will see the RBA cut rates again in October. However, markets had recently begun to trade as if a rate cut next month was no longer likely, which could mean the Aussie is in for a bumpy ride. Westpac is tipping AUD/USD to return to a 10-year low this month. 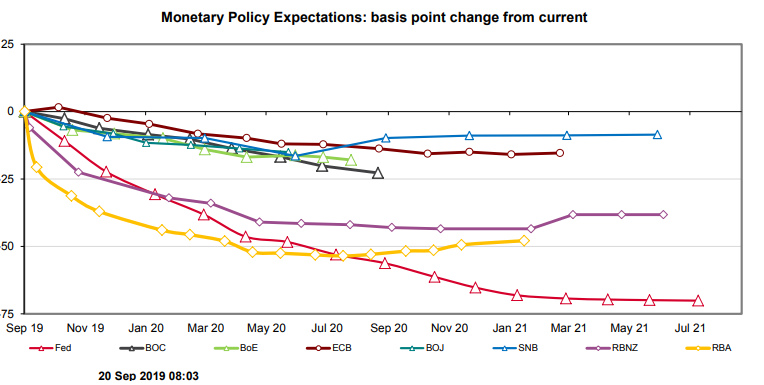 Above: Market expectations for RBA (yellow) rate cuts into mid-2021 in basis points.

"Pricing for the RBA to cut the cash rate to 0.75% on 1 Oct was only 25% into the weekend but after the labour force data was close to 80%," says Sean Callow, a strategist at Westpac. "This is a severe headwind for AUD/USD, especially in the wake of the Fed’s reluctant rate cut which should bolster USD near term. Unless Governor Lowe douses rate cut talk, AUD/USD should slip towards 0.6700 over the week but find buyers on any dips below that figure."

Westpac is reported to have been joined in its RBA call by analysts at Citi who're also now looking for an October rate cut, although those firms are by no means alone in looking for Aussie policmakers to rush into action next month.

"The unemployment rate edged up to 5.3% in August...Moreover, uncertainty about the impact of the stimulus from the tax cuts has increased. Consumer confidence fell a sharp 3.5% last week and is now running below its long-run average...Global policy settings are not helping the RBA’s cause either. The US Federal Reserve cut rates again in the US," says Felicity Emmett, an economist at ANZ. "These developments together make us feel more comfortable with our call that the next RBA rate cut will be at its October meeting. Governor Lowe’s speech next week will be closely watched for any hints." 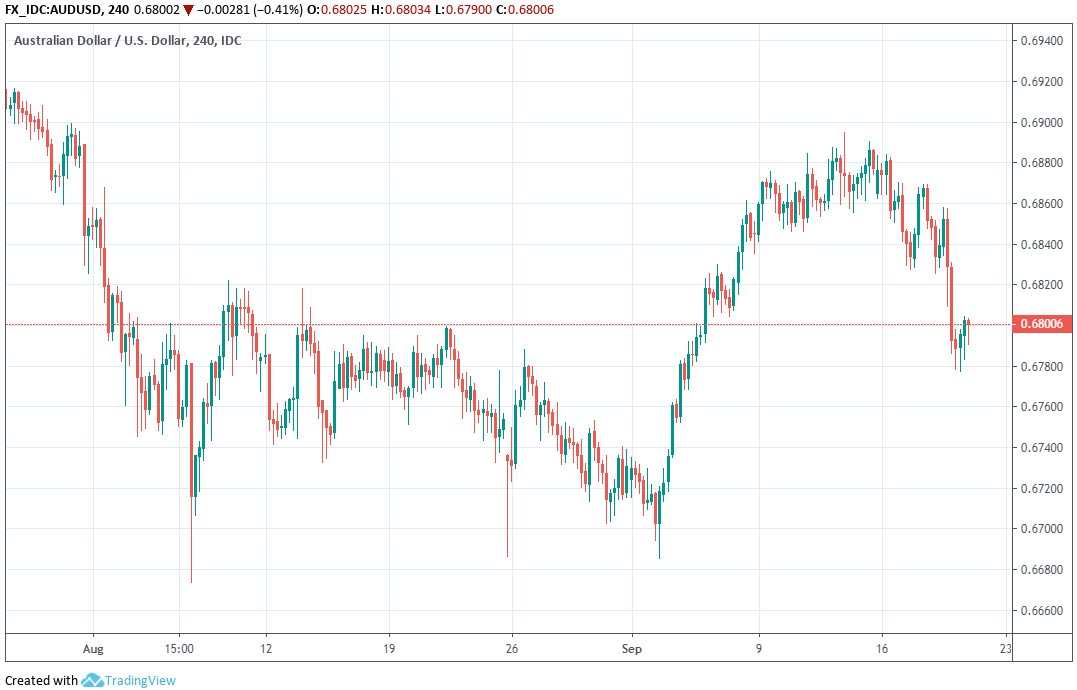 "We started the week with decent, albeit not great, chart technicals…but things really fell apart when these negative fundamental developments put repeated pressure on trend-line support in the 0.6840s.  With this level now broken and RBA rate cut odds surging once again for October 1st (78% now vs 25% at the start of the week), we think AUDUSD will continue to struggle here into next week," says Eric Bregar, head of FX strategy at Exchange Bank of Canada.

Speculation of a 'mini deal' to either end, or at least suspend, the trade war between the U.S. and China had lifted the Aussie throughout the first half of September because such a thing was seen as offering the Chinese and global economies respite from the U.S. tariff pressures that have riled both in the last year. Australia's commodity-backed Dollar is sensitive to changes in investor sentiment toward China and the global economy.

The Reserve Bank of Australia played a role in lifting the Antipodean unit in recent weeks too. It left the cash rate unchanged in the first week of September after having said in August it'd like to see an "accumulation of additional evidence" that more cuts are necessary before acting again. That led markets to believe a pause in the RBA rate cutting cycle could be afoot, although events since then have put paid to that notion.

"TD has changed its RBA call and now expects an October rate cut. The details of the employment report were soft, including the underemployment rate. The move in the underutilization rate underscores that spare capacity has started to rise. The result is likely to inject some caution into the RBA's thinking, especially as labor dyanmics cool. We also close out our short EURAUD idea after getting stopped out," says Mark McCormick, head of FX strategy at TD Securities. 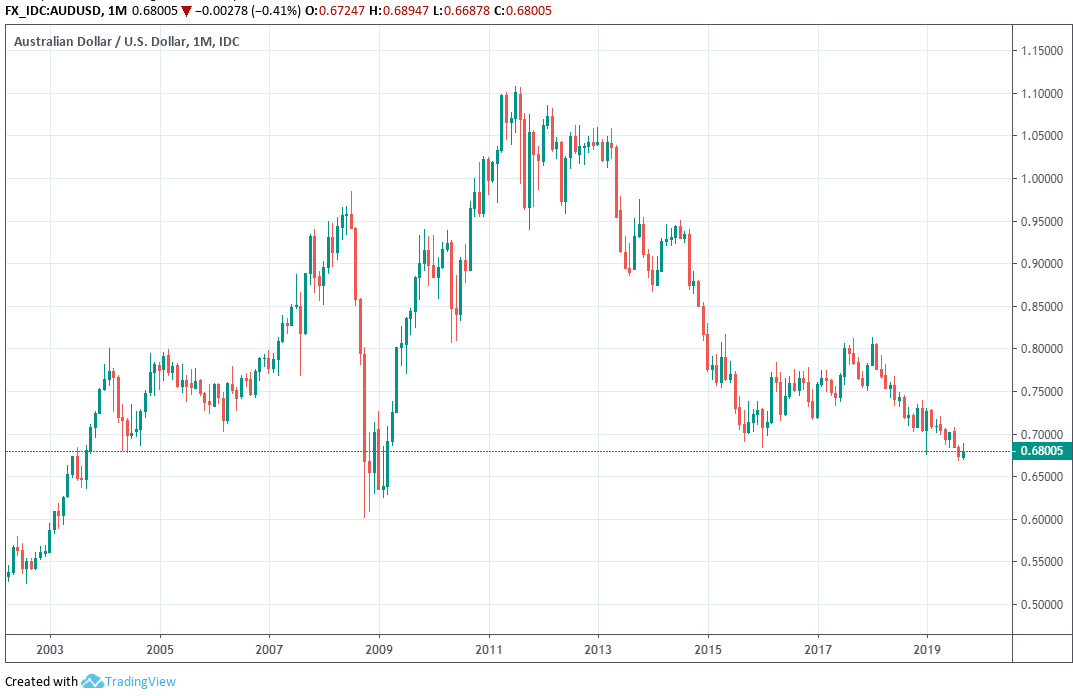 The RBA has cut Aussie interest rates twice this year in an effort to lift inflation back to the 2%-to-3% target band by stimulating the economy with lower borrowing costs. Jobs matter to the RBA because without low unemployment, and a 'tight' labour market, wages packets are unlikely to rise by enough over the coming years to facilitate the growth in consumer spending the bank says is necessary in order to get inflation back to the target.

"Job vacancies will be watched closely given increased focus on the labour market. The RBA’s Lowe and global growth will drive the AUD this week," says Rahul Khare, a strategist at ANZ, of the week ahead. "The RBA’s Lowe will provide an update with the market looking for clues on timing of further easing. Given the RBA’s broadening considerations, we seek to understand the “accumulation of evidence” required to warrant further easing."

Above: Market-implied cash rates for AU and U.S. at monthly intervals. Source: Westpac.

RBA rate cuts have seen the Aussie fall from grace among investors, who used to earn a yield premium from owning the Aussie instead of other currencies because of its typically higher interest rates. Australian rates are now only half those offered to savers in the U.S., which is a significant part of why Westpac and other firms are tipping the AUD/USD rate to decline in the weeks ahead.

"Growing calls for RBA easing have manifested themselves in the AU/U.S. 10-Year yield spread, now at ~-75.0bp, back from the ~-50.0bp level seen a couple of weeks ago," Eurex Exchange reports, in a morning newsletter Friday.

Expectations of more losses for the AUD/USD rate were egged on again late Wednesday when the Federal Reserve suggested there will be no further cuts to the Fed Funds rate in 2019 and, at best, only one rate cut in 2020. Markets had been betting on a steep reduction in U.S. borrowing costs in the year ahead that would have ironed out at least some of the negative difference between rates on both sides of the currency pair. 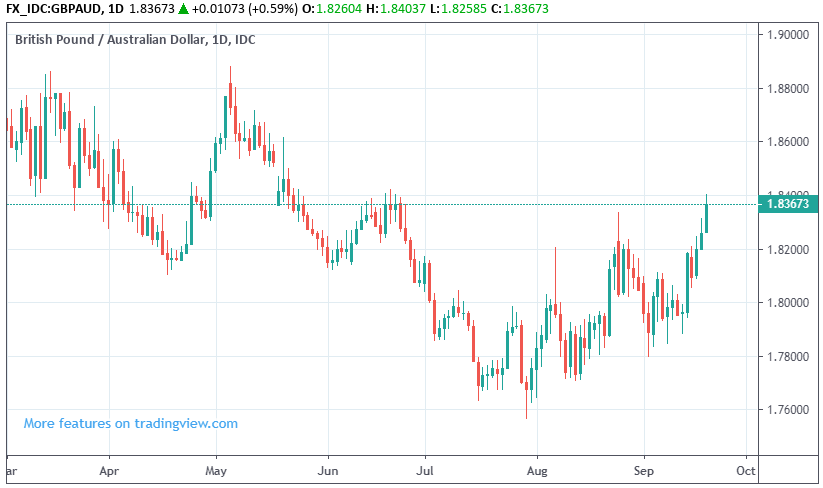 Australia's Dollar could catch a break when it comes to Pound Sterling in the weeks ahead as the Brexit Saga enters its penultimate chapter, ensuring that uncertainty about future trade arrangements and volatility in British exchange rates reaches fever pitch. Callow has warned of volatility in the weeks ahead but Westpac forecast in June that the Pound-to-Australian-Dollar rate would rise to 1.92 before year-end. It was quoted at just 1.83 on Thursday.

Parliament is prorogued, a Brexit deal is a distant hope and election outcomes remain as unclear as Brexit outcomes. GBP is likely to remain volatile," Westpac's Callow writes, in a note to clients Thursday.

Parliament has been suspended and the two sides of the Brexit divide are this week wrestling in the Supreme Court over whether the decision to end the current parliamentary session via prorogation was legal. All of thise is taking place as the clock ticks down toward deadlines on October 19 and October 31 that will be key to the next developments in the Brexit process.

Opposition MPs and 'rebels' from within the governing Conservative Party, with help from an apparently partisan Speaker of the House of Commons, succesfully hijacked the parliamentary agenda this month and imposed upon the government legislation that requires Prime Minister Boris Johnson to request a third Brexit delay no later than October 19 if an exit agreement has not been reached with the EU up until that point.

If such a request is not approved by the EU before October 31, and a deal not agreed, a 'no deal' Brexit will take place at 23:50 on Halloween. Most analysts say that would lead to further punishing losses for Sterling, and PM Johnson continues to insist that he will not request any extension of the Article 50 period if the talks fail, despite the law recently made in parliament.