The Australian Dollar was under pressure again Thursday after official data showed the unemployment rate remaining at an elevated level in May when financial markets had looked for it to pare back an earlier increase, which has encouraged speculation of further interest rate cuts to come.

Australia's economy created 42.3k new jobs last month, Australian Bureau of Statistics data revealed Thursday, when markets were looking for just a 16k increase. However, almost all of the new jobs were in the part-time category, which takes some of the shine off the numbers.

That jobs growth was not enough to bring down the unemployment rate in May, which remained at a 2019 high of 5.2% even though consensus had been for it to dip to 5.1%. Australian unemployment has now risen 0.3% since February.

"We don’t expect the RBA to read too much into the strength of employment in May as the result was likely heavily impacted by the election, which generally sees a lot of people employed to carry it out. More importantly, labour market slack remains elevated," says David Plank, head of Australian economics at Australia & New Zealand Banking Group (ANZ). 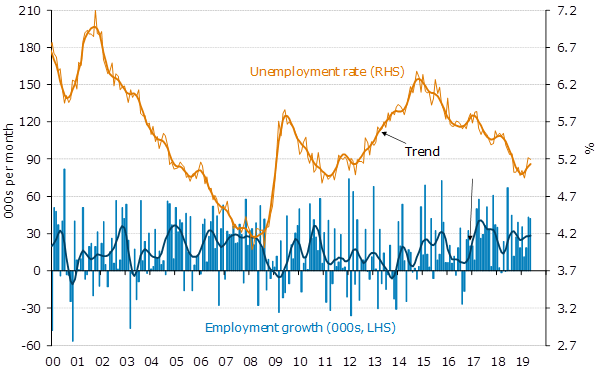 Markets care about unemployment figures because it takes a healthy labour market for workers to be able to demand improved pay packets, and the Reserve Bank of Australia (RBA) has said it needs wage growth of around 3% if inflation is ever to rise and hold within the 2%-to-3% target band.

RBA policymakers have been battling inflation that is below the 2%-to-3% target for a number of years now only now the domestic and global economies are slowing, depriving the bank of the increased labour demand thought to be needed in order to lift workers' wages and generate higher inflation pressures.

The RBA said in February that a "sustained" increase in unemployment would force it into cutting interest rates, and it then cut the cash rate to a new record low of 1.25% in May after joblessness rose 30 basis points and other data showed the economy slowing.

"The Australian May labour market data reinforce our view that the RBA will cut the cash rate again in August to 1.00%. Downward pressure will remain on AUD for now, despite the equal risk of Fed rate cuts," says Kim Mundy, a strategist at Commonwealth Bank of Australia.

The RBA gave little guidance in May on the question of if and when markets can expect another cut. Nonetheless, investors are betting it will cut again in August and, potentially, a third time in November.

"The Australian unemployment rate cannot recover perceptibly and thus sets the course for further interest rate cuts, as the RBA is monitoring this development in particular. As a result, the upside potential of the Australian dollar remains fundamentally restricted," says Marc-André Fongern at MAF Global. 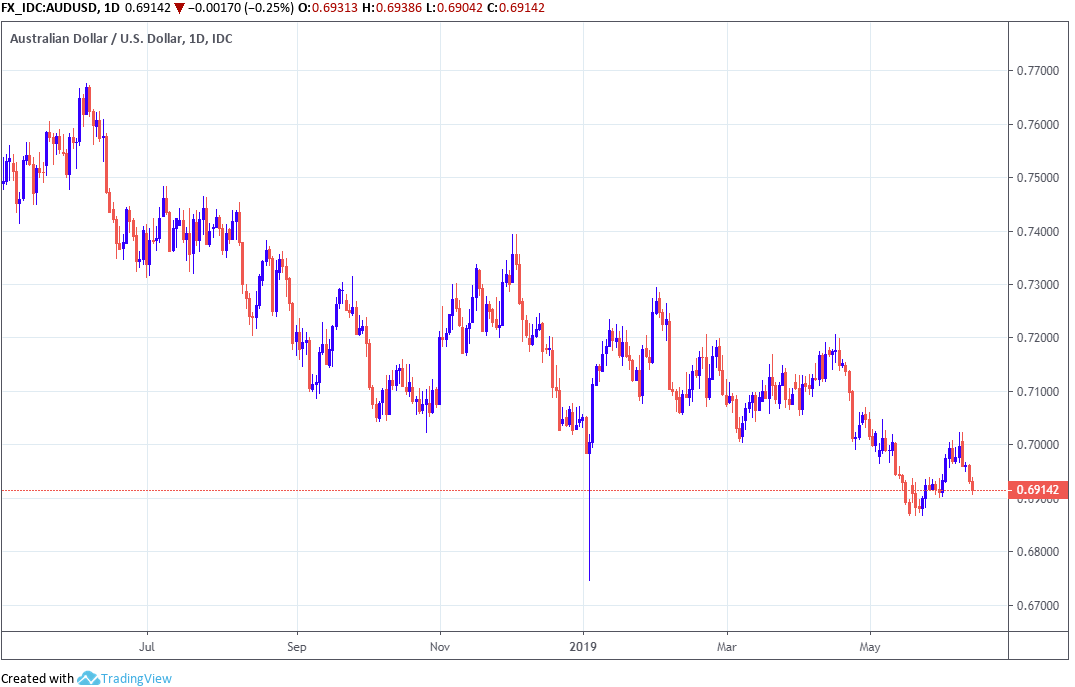 Above: AUD/USD rate at daily intervals.

"We see the A$ as being capped by 0.70 near term being the midpoint of our fair value band on the basis that offshore risks are rising. In this environment, with iron ore feeling like it has peaked as Australian supply has recovered, the A$ should underperform," says Sean Callow, a strategist at Westpac.

Callow and the team at Westpac, one of Australia's four largest lenders, have told clients to sell the AUD/USD rate around the 0.6985 level. They're looking for a move down to 0.68 to play out over the coming weeks.

The Pound-to-Australian-Dollar rate was 0.26% higher at 1.8362 and is up 1.47% for 2019, although it's been highly volatile given the ailments of the Aussie as well as ebb and flow of market expectations about the Brexit process.

"The 3-year Australian government bond yield slid to record lows below 1% as additional easing beyond is priced in. Overall this should keep downward pressure on the Aussie going forward," says Lee Hardman at MUFG. 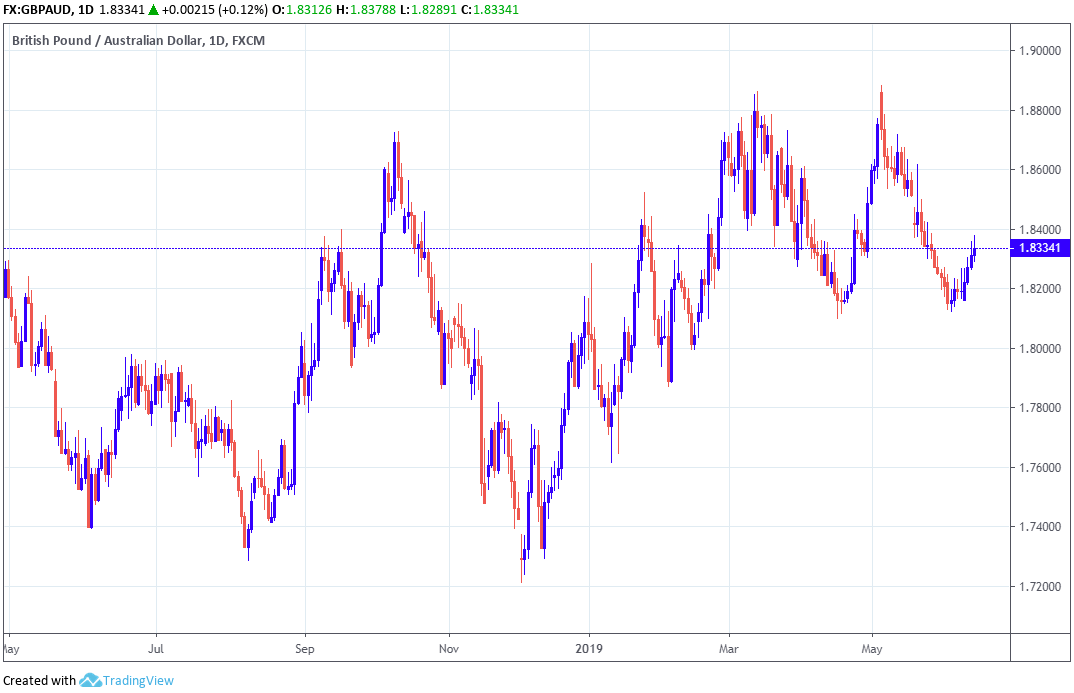 Above: Pound-to-Australian-Dollar rate at daily intervals.

Technicals Point to Lower AUD, but Some Still Forecast Recovery

Australia's Dollar received a new lease of life at the start of the new month when the RBA neglected after its June interest rate meeting to validate market bets that it would cut Aussie borrowing costs to another record low before the curtain closes on 2019.

The Antipodean unit was buoyed further last week when U.S. data incited a tidal wave of wagers that the Federal Reserve would cut its own interest rate on multiple occasions in 2019. But the tailwind did not last for the long and after failing to overcome the 55-day moving average of prices, the AUD/USD rate has entered retreat.

"AUD/USD has recently rallied to and failed just ahead of the 55 day ma at .7023 and the April peak at .7069 and we suspect that the near term correction higher is over. We have exited our long positions and reinstated short positions," says Karen Jones, head of technical analysis at Commerzbank. 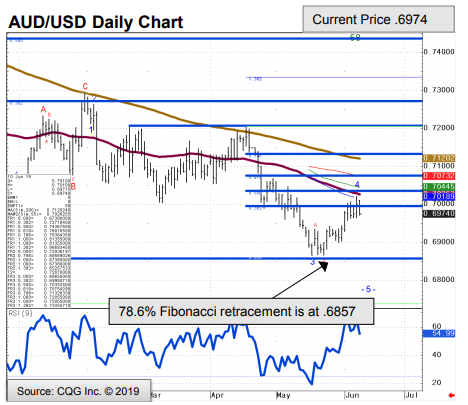 Jones is now betting on fresh declines after having bought the currency when it was trading around 0.6950, which was close to its lowest levels since the immediate aftermath of the global financial crisis.

However, fundamental analysts at the Germany-headquartered lender still hold out hope for an Australian Dollar recovery of sorts later this year, mostly due to an anticipated weakening of the U.S. Dollar.

"We have slightly lowered our AUD-USD forecast as we expect a more dovish RBA, but continue to forecast an upward trend due to a weak US dollar," says Thu Lan Nguyen. "As long as the uncertainty about the negative effects of the US trade disputes on the real economy continues, the fact that the US Federal Reserve can and will adjust interest rates most strongly and probably most actively among the G10 is likely to weigh on the US currency."