- AUD pops after RBA neglects to validate market bets on 2 cuts.
- But door is open to further rate cuts, households in focus at RBA.
- Westpac says "sell" AUD, more cuts will come and weigh on currency.

The Australian Dollar rose on Tuesday after the Reserve Bank of Australia (RBA) cut its interest rate for the first time in two years but neglected to validate market bets that it will slash borrowing costs again before the year is out.

Australia's Dollar bested all of its G10 rivals including Pound Sterling Tuesday after the RBA cut its cash rate to a new record low of 1.25%, which is a rare currency market response to a central bank interest rate cut.

Markets were well prepared for Tuesday's move, which was the first cut since August 2016, after Lowe said in May the RBA would consider the case for a cut at its next meeting. They're also looking for more cuts this year but RBA guidance failed to validate this view, which might explain the Australian Dollar's strong performance early in the Tuesday session.

"Today's decision to lower the cash rate will help make further inroads into the spare capacity in the economy. It will assist with faster progress in reducing unemployment and achieve more assured progress towards the inflation target," says Reserve Bank of Australia Governor Philip Lowe. "The Board will continue to monitor developments in the labour market closely and adjust monetary policy to support sustainable growth in the economy and the achievement of the inflation target over time."

Interest rate cuts normally see investors driven out of and deterred away from a currency because capital flows tend to move in the direction of the most advantageous or improving returns. And a cut in Australia amounts to an improvement in the relative-return proposition of other currencies.

Tuesday's decision follows years of below-target inflation and comes at a time when growth is slowing and the outlook for the Australian economy is souring because of declines in domestic house prices and due to President Donald Trump's trade war.

"The RBA’s latest rate cut is aimed at heading off a further slowing in growth which would threaten higher unemployment and lower for longer inflation," says Shane Oliver, chief economist at AMP Capital. "More rate cuts are likely to be needed ultimately taking the cash rate to a low of 0.5% next year."

Interest rate decisions are normally only made in relation to the outlook for inflation, which is sensitive to changes in economic growth, as they are the primary tool policymakers use to control price pressures. The RBA said Tuesday the consumer price index should reach the 2%-to-3% target in 2020.

President Trump's trade war threatens Australia's largest trade partner, China, as well as the outlook for prices of Australia's commodity exports. RBA governor Lowe said Tuesday that "downside risks" to the global economy have increased in the last month due to an escalation in the U.S.-China tariff fight. 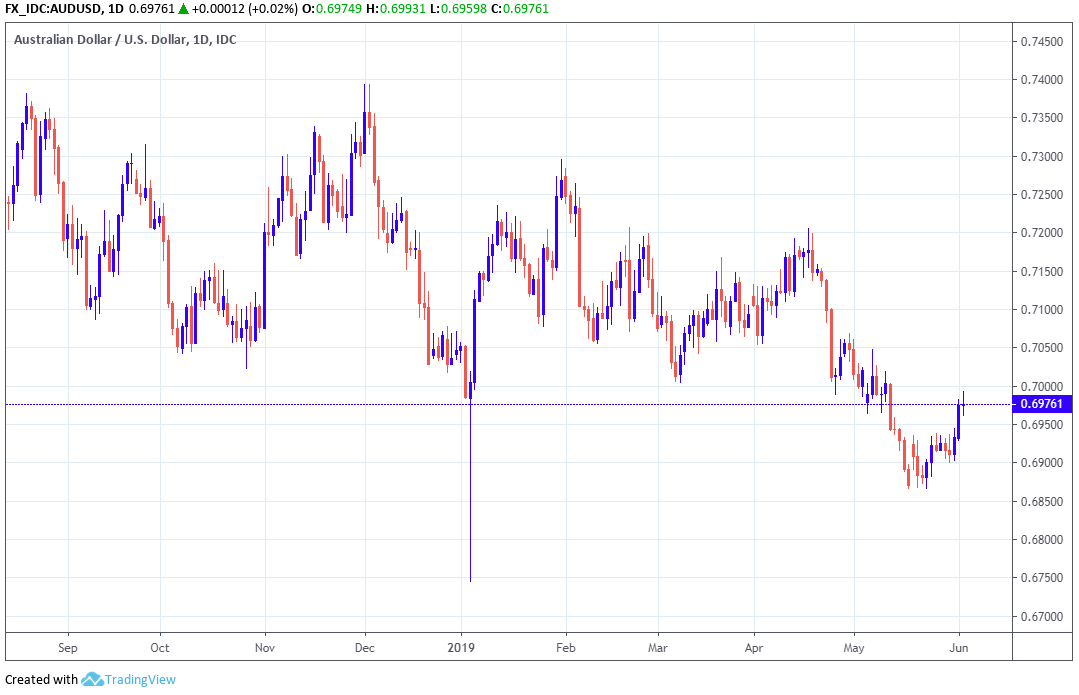 "AUD/USD has eroded its 23.6% retracement at .6945 and looks set for further gains to its 55 day ma at .7035. It remains upside corrective near term. We suspect that it has recently based just ahead of the 78.6% Fibonacci retracement at .6857," says Karen Jones, head of technical analysis at Commerzbank. "Initial resistance is the March low at .7004 as well as the 55 day moving average at .7035...Elliott wave counts are implying that the market will struggle at the .7069 30th April peak." 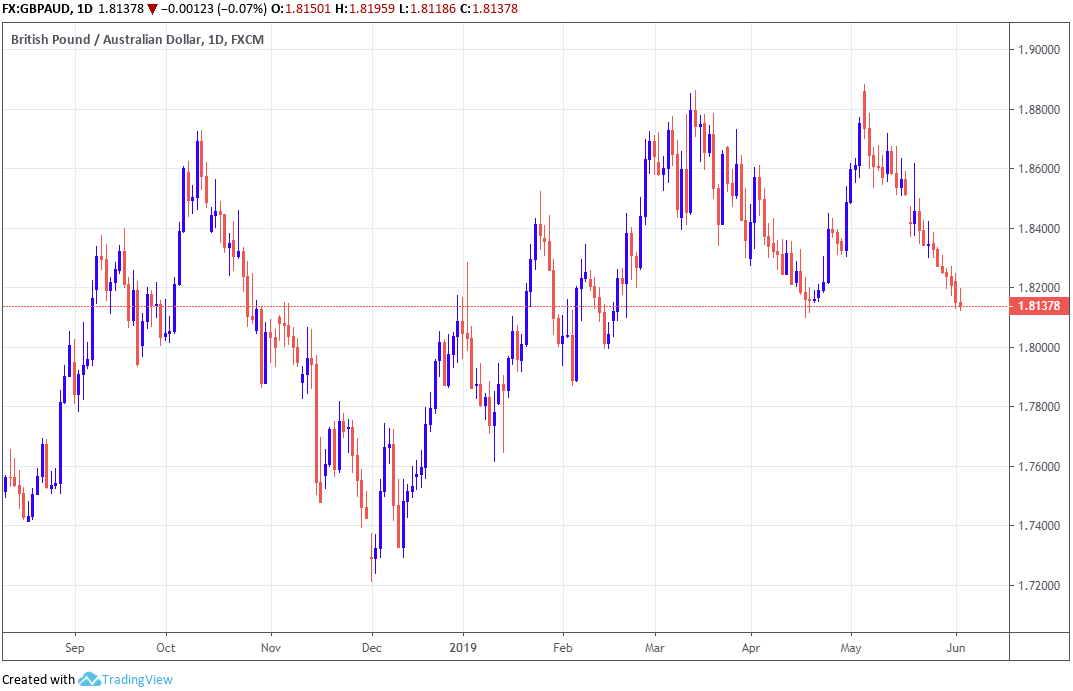 Analysts at Commonwealth Bank of Australia and RBC Capital Markets had tipped the Aussie to do well in the aftermath of Tuesday's rate cut, citing the RBA's propensity to avoid pre-commitments to future policy action which in this case, risked forcing the market to reconsider its own outlook for Australian interest rates.

Now, some local analysts are already telling their clients they should sell the Antipodean currency ahead of further declines up ahead, citing forecasts for further interest rate cuts this year that are not yet fully priced-in by the market.

Financial markets are still betting the RBA will cut interest rates again before the year is out and they're flirting with the idea of pricing-in a third interest rate cut, but there's still more work for them to do before a third cut becomes baked into the price of the Aussie Dollar.

"We see the A$ as being capped by 0.70 near term being the midpoint of our fair value band on the basis that offshore risks are rising. In this environment, with iron ore feeling like it has peaked as Australian supply has recovered, the A$ should underperform," says Sean Callow, a strategist at Westpac.

Callow and the team at Westpac, one of Australia's four largest lenders, have told clients to sell the AUD/USD rate around the 0.6985 level. They're looking for a move down to 0.68 to play out over the coming weeks.

Westpac forecasts a total of three interest rate cuts from the RBA in 2019, with the next seen coming in August and the final cut projected to be delivered in November. The market-implied RBA cash rate for November 05 was 0.90% on Tuesday, although it would be 0.75% if a third cut was actually delivered.

The RBA has for a while, hinged a substantial part of its interest rate decision making on developments in the labour market, because jobs growth and low unemployment are need in order for wages and household spending to grow. Higher wage growth and spending could lift inflation toward the RBA's target.

Australian unemployment rose from 4.9% in February to 5.2% in April, which prompted Lowe to say in May that he'd consider a rate cut this month. Westpac forecasts the jobless will rise further still this year, to 5.4%.

"The market could be excused from assuming that even a sideways move in the unemployment rate, let alone a bump higher, will deliver a rate cut at the next RBA meeting," says David Plank at Australia & New Zealand Banking Group (ANZ). "While we think there will be a further easing in coming months, our view is that the RBA will display some patience, given it doesn’t have a lot of policy space. If some of the key forward indicators display notable improvement then the RBA may sit pat for a period even if the unemployment holds around current levels. If they don’t, it will go sooner."