- Politics back on the agenda for Sterling

It's a soft start to the new week for the Australian Dollar, with the currency going down 0.15% against both Sterling and the U.S. Dollar.

The Pound-to-Australian Dollar rate is trading at 1.82 amidst thin trading conditions as most of the world's largest financial markets are on holiday. We therefore won't read too much into the Pound's move higher.

Losses in GBP/AUD seen in the previous week came mainly as a result of the Australian Dollar strengthening after the release of positive data out of China, its largest trading partner. The Pound was however supported after strong retail sales and wages data confirmed the UK economy to be in robust shape.

From a technical point of view, the broad outlook for GBP/AUD suggests a narrative of decline. This will probably continue conditional on clearance of heavy support below. 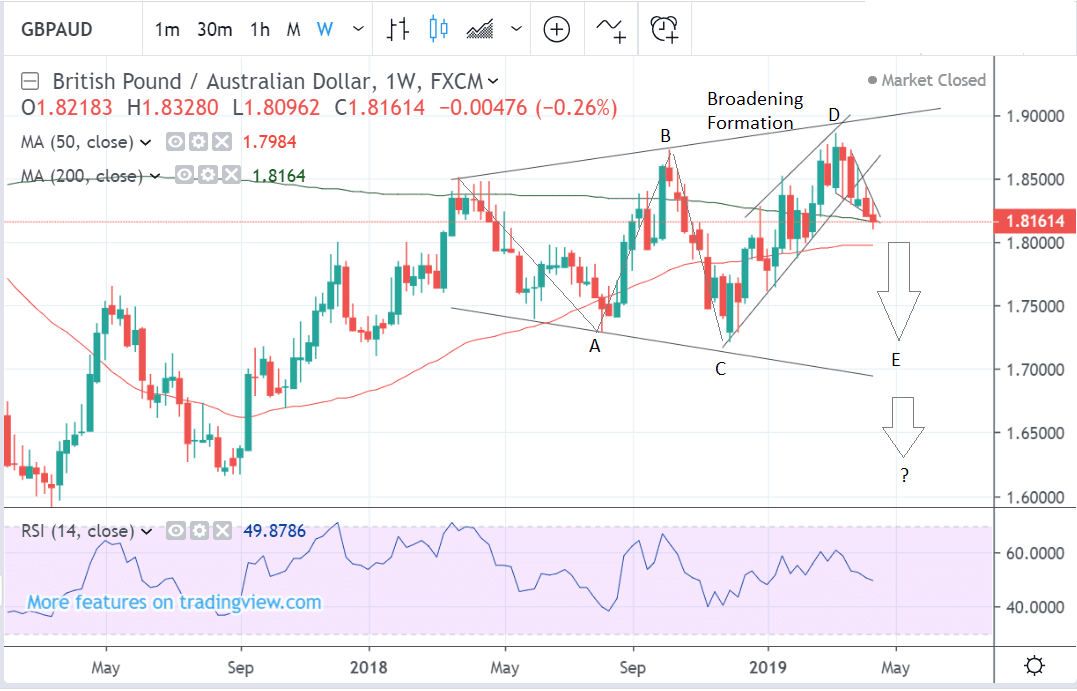 Our lead interpretation of the chart is that it has been forming what is probably a bearish broadening formation (also known as a loudspeaker pattern) ever since the beginning of 2018.

Broadening formations are usually composed of 5 waves, labeled A-E, with GBP/AUD in the process of unfolding the final 5th E-wave down. Wave-E might take the pair all the way down to the border line at around 1.7200 eventually.

Looking more closely at recent activity and we note how the exchange rate has now successfully broken below the lower channel line of a rising channel; last week’s second bearish candle in a row confirms the break. 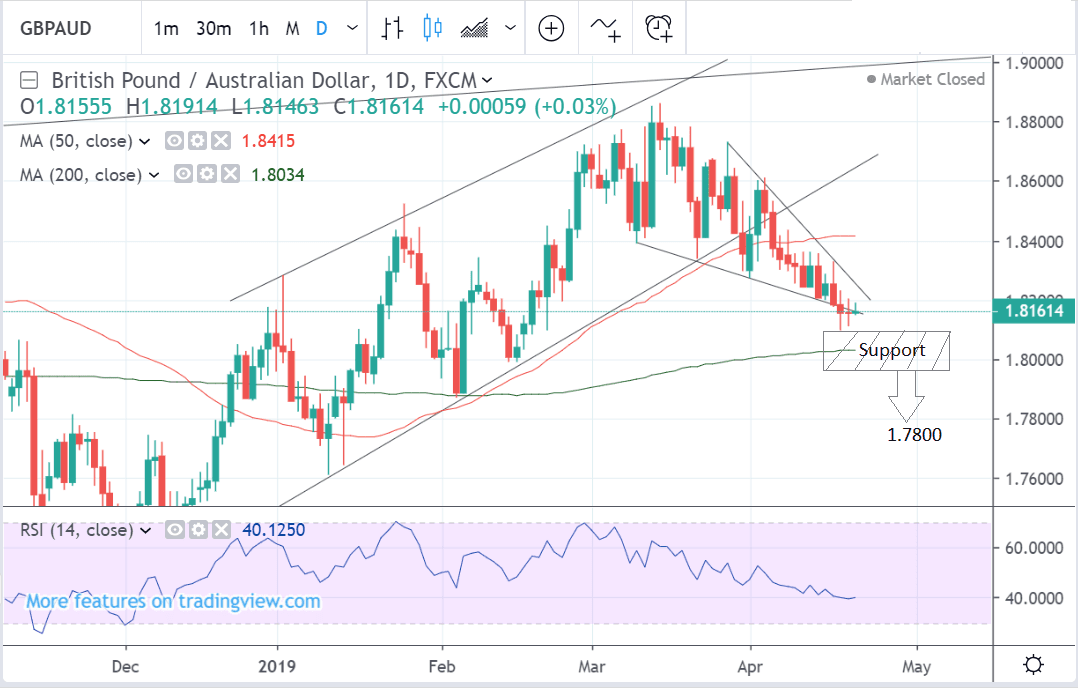 Although the broadening formation is a bearish indicator, in the short-term, the pair is running into some hefty support in the 1.7950-1.8160 region and this will slow its decline. In fact, the support is so tough that an extension of the downtrend is only conditional on a clear break below the zone, as would be signaled by a move below 1.7900.

The support zone (hatched area on daily chart) is made up of several major moving averages (MA), including the 200-week, 50-week and 200-day MAs.

Momentum is bearish but tailing off on the daily chart and showing some potential to pivot higher. On the weekly chart, it is not very bearish at all and isn't particularly signalling further declines in a big way.

This is a make or break moment for the exchange rate. Can it break through the support matrix below and continue the new bear trend lower or will it bounce off the floor and reverse trend higher? 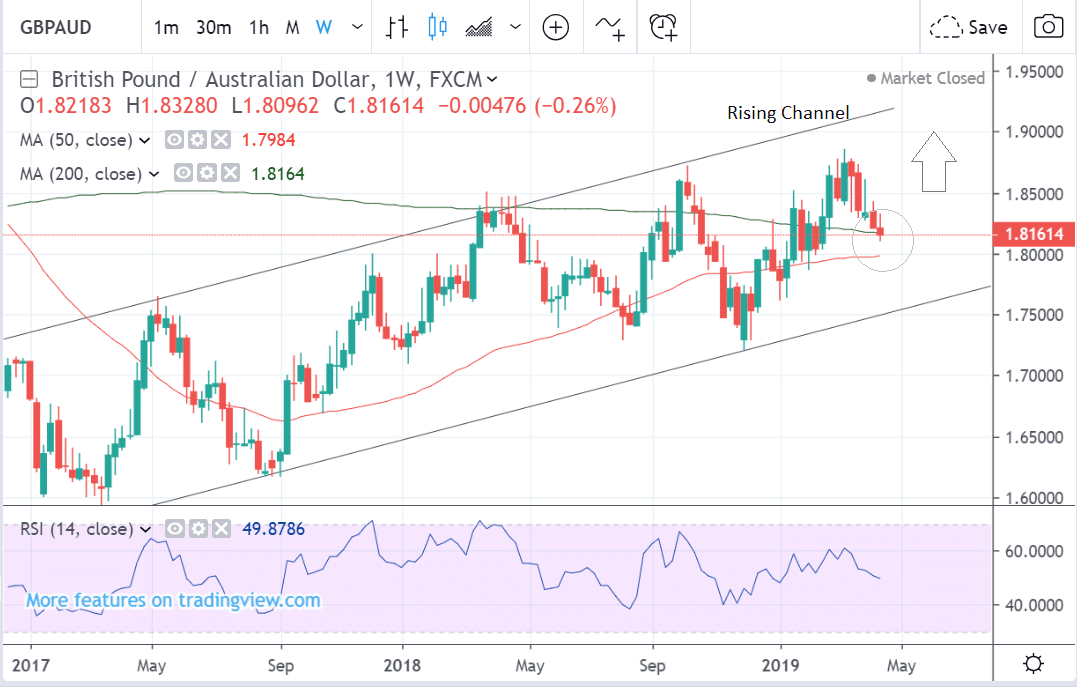 The picture is further complicated by an alternative equally valid interpretation of the chart which simply sees GBP/AUD rising within a very large ascending channel. This produces a more bullish general outlook for the pair over the medium term, unlike the broadening formation.

The Aussie tends to do well when global stock markets and commodity markets are rising; particularly if that rise is linked to good news out of China.

While there are no major Chinese data releases to watch out for, developments in China from an economic and financial perspective will be watched.

Developments in U.S.-China trade negotiations are of particular interest with signs pointing to a positive resolution.

The main fundamental data release for the Aussie Dollar is inflation data out on Wednesday at 02.30 B.S.T. which is forecast to show a 1.5% rise compared to a year ago, and a 0.2% rise quarter-on-quarter in Q1.

If the actual results are as forecast, inflation will have fallen from the previous period when it showed a 1.8% and 0.5% respective rise.

“Australia’s Q1 CPI figures will likely indicate a continued absence of inflation pressures. The Q4 CPI slowed to 1.8% year-over-year, while core inflation measures were also slightly below the Reserve Bank of Australia’s 2%-3% medium-term target range. Inflation pressures were benign across the spectrum, with goods and services inflation both running at just 1.7%,” say Wells Fargo in a client briefing.

If anything, however, risks may be tilted to a slowdown in inflation as the economy wrestles with some key challenges including relatively low wage growth, low general economic growth and house price decline. If it does, the Aussie could follow suit.

Politics is back on the agenda for Sterling as UK parliamentarians return to their desks.

A top member of Prime Minister Theresa May's Conservative Party will tell her in the coming week that she must step down by the end of June or her lawmakers will try again to depose her, the Sunday Times reported, without citing sources.

The pressure on May comes amidst a precipitous drop in support for the Conservative party after a lengthy Brexit delay was announced, with voters apparently flocking to the newly-formed Brexit Party of Nigel Farage. We see the implications of the sudden shift in domestic politics as posing downside risks to Sterling with a 'Brexit at all costs' likely to come on October 31.

The Conservatives, under May or a new leader, know further delays will only deeply damage the party's standing with the public.

A change in leader of the Conservatives could mean the UK could be under the leadership of a 'Brexiteer' Prime Minister by late summer, we believe this creates the kind of uncertainty that would weigh on Sterling over coming weeks and months.

According to the report, the Conservative Party could go as far as changing party rules on leadership change.

May survived a vote of no confidence in December with current party rules stating parliamentarians cannot challenge her again until a year has passed. Graham Brady - who oversees party rules - will tell May the rules will be changed unless she quits, the Sunday Times reports.

There is also the chance of a vote being held on whether the UK should remain in a customs union, which could cause a surge higher for Sterling if affirmative.

It is a thin week for UK data with the most important releases being the UK public borrowing data and figures from the Consortium of British Industry (CBI), which is often a useful leading indicator for the broader economy.

UK public borrowing basically measures how much the government needs to borrow to meet its outgoings in the month in question. The data on Tuesday is forecast to show a relatively small £50m (£0.05bn) sum was required to cover the shortfall.

The chart below shows how over time the government has reduced the amount it has needed to borrow to cover its outgoings. This is obviously a positive sign for the economy, both because it reduces the country’s reliance on outside lenders which can leave its currency more vulnerable, and also because it suggests the economy is generating more tax revenue, which is a sign of increased activity. 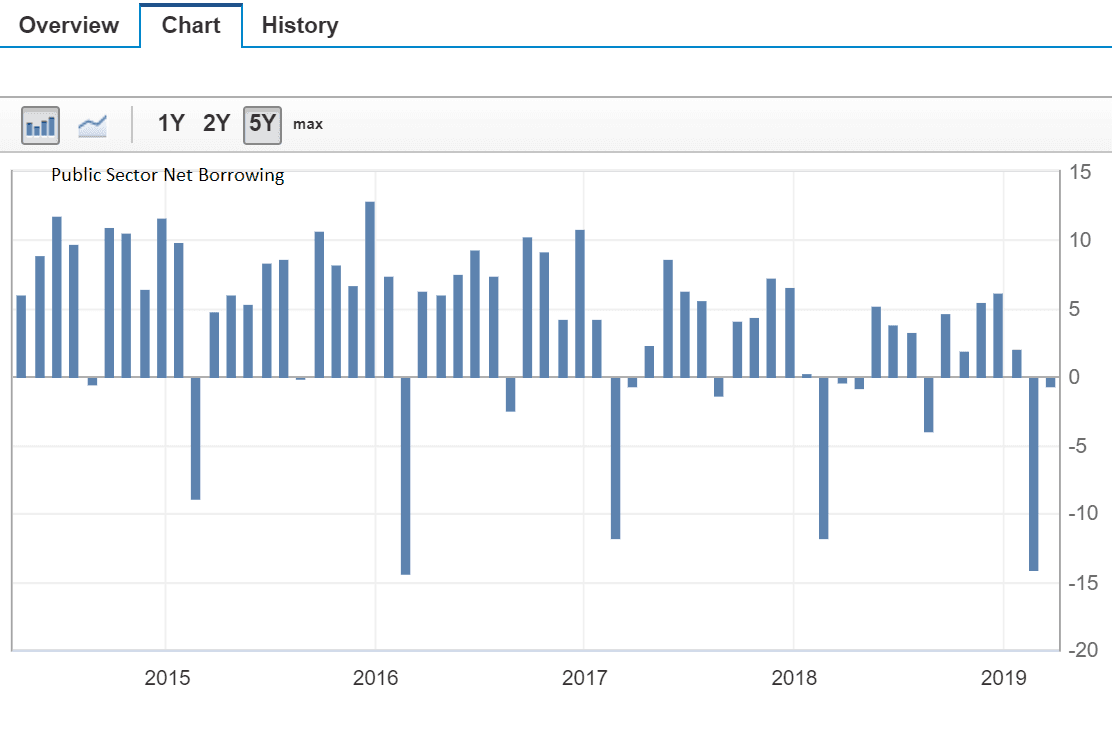 Public sector borrowing is not likely to move Sterling unless it surprises grossly higher or lower. Nevertheless, it provides useful background information. It is released at 9.30 BST.

The other key releases for the Pound are the CBI distributive trades and CBI industrial trends orders reports.

The former is a gauge of the “wellbeing of the retail sector” based on a survey of 150 retailers; the latter is a survey of manufacturers.

Both are considered important leading indicators and can impact on the Pound if the actual result differs substantially from the expected.