"Stronger performance linked to resilient demand risks keeping domestic price pressures elevated, thereby increasing the risk that the BoE has to really slam on the brake to sustainably bring down inflation" - Berenberg.

South Africa's Rand rose by less than Sterling against a broadly weaker Dollar in Wednesday trade after local inflation surprised on the downside of the market consensus once food, energy and some other items are removed from the basket of goods for which prices are analysed.

"This will likely be insufficient to see the SARB halt its rate hike cycle, but a 50bp, instead of a 75bp hike is likely in January, as the US has similarly slowed its pace of interest rate hikes, with hopes of 25bp," says Annabel Bishop, chief economist at Investec.

"CPI inflation is likely to see a downward trend over H1.23, as base effects drive down the inflation rate year on year in a weaker inflation environment, and the global economy is expected to remain weak, recovering only in H2.23," Bishop adds following a look at the data. 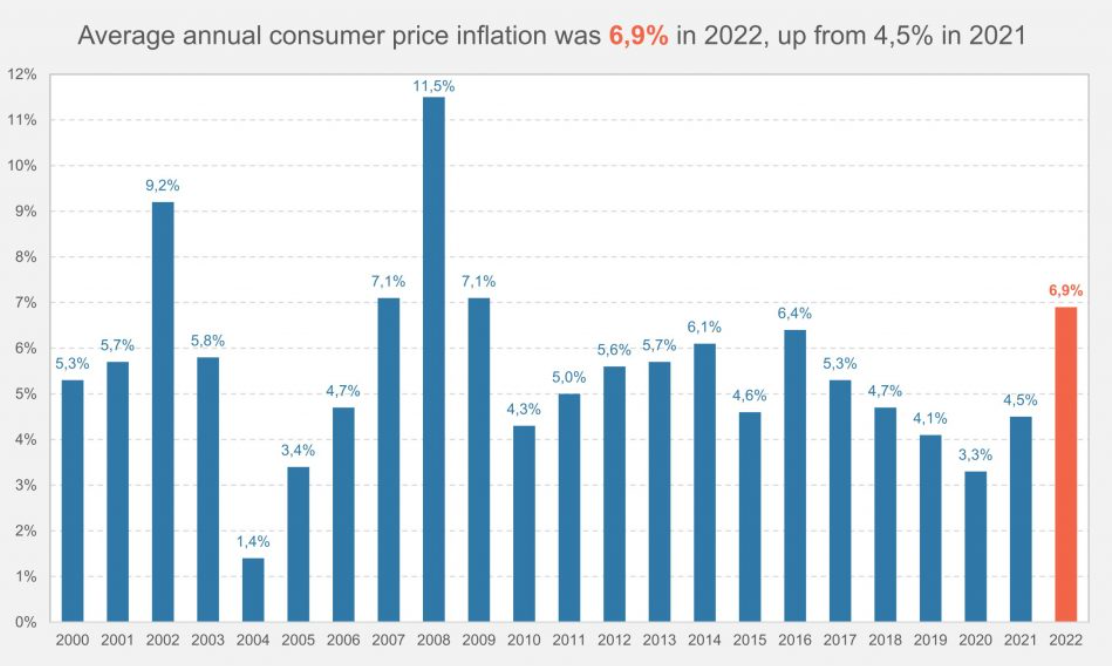 South Africa's core inflation rate ebbed to 4.9% from 5% previously and in contrast to the picture in the UK where the Office for National Statistics (ONS) said just a short earlier that core inflation had held stubbornly at 6.3% going into year-end owing to accelerated price increases for some services.

"It’s important to note that core services jumped from 6.4% to 6.8%, a development that the BoE should particularly take into consideration, and when added to yesterday’s wage data should tilt the balance towards a 50bp hike in February," says Francesco Pesole, an FX strategist at ING.

Previously in the UK other figures suggested pay growth for workers had accelerated again in the final quarter of last year while last week, GDP data indicated the economy has not deteriorated to the same extent envisaged in the November's Bank of England (BoE) forecasts.

"Stronger performance linked to resilient demand risks keeping domestic price pressures elevated, thereby increasing the risk that the BoE has to really slam on the brake to sustainably bring down inflation," says Kallum Pickering, a senior economist at Berenberg. 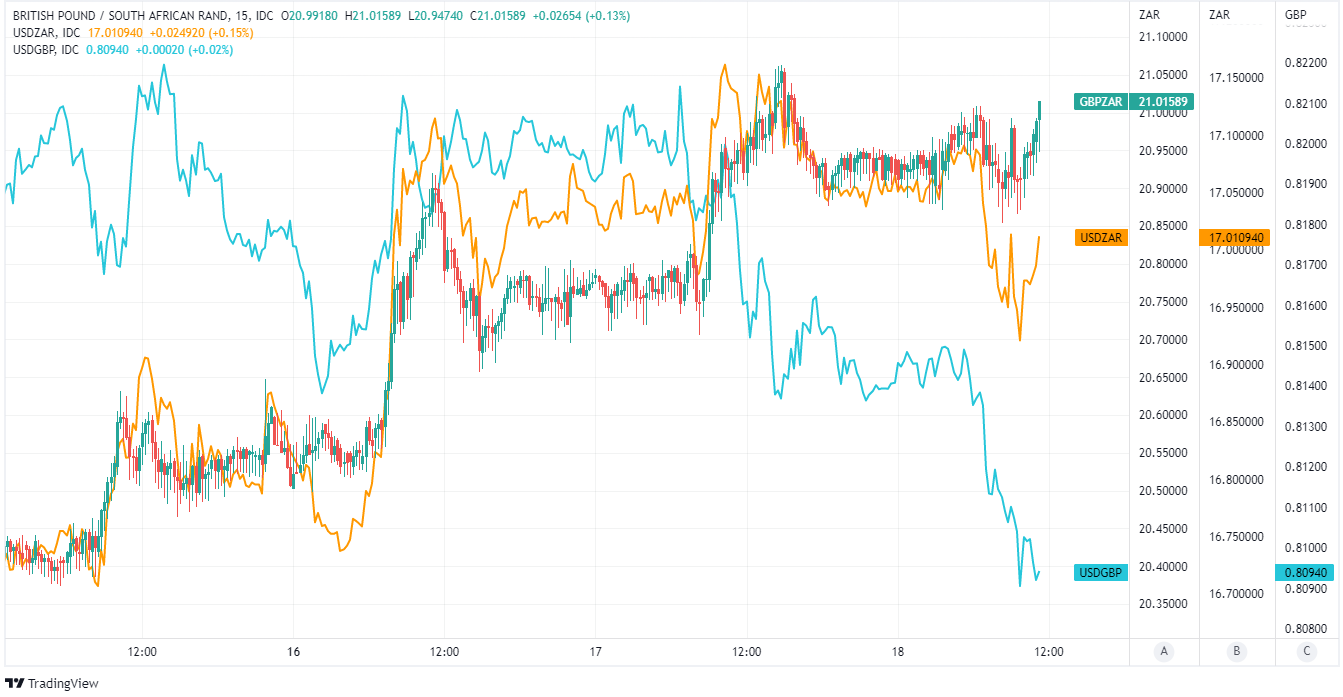 Wednesday's buoyant performance in GBP/ZAR also came amid widespread declines for U.S. Dollar rates and ongoing market interest in the Bank of Japan (BoJ) where a decision to leave monetary policy unchanged for January was followed by relevant commentary from government ministers.

Notably, Minister of Economy, Trade and Industry Yasutoshi Nishimura reportedly told the World Economic Forum that an end to the BoJ's loose monetary policy is drawing closer but that "until we can see a clear path in the future, I understand the BOJ is going to maintain its current policy."

It's not clear whether these remarks, which included the suggestion of a five percent wage increase being in the pipeline for Japanese workers, were behind the Dollar decline though earlier selling of the Yen had appeared to drive the U.S. currency stronger.

"USD/ZAR is still in a short-term downtrend now with the 50 day moving average providing short-term resistance above which also coincides with a downtrend channel in shape since November. The 200dma around 16.8485 today, is providing some support below for now after a couple of attempts to fall through it," says Brad Bechtel, global head of FX at Jefferies. 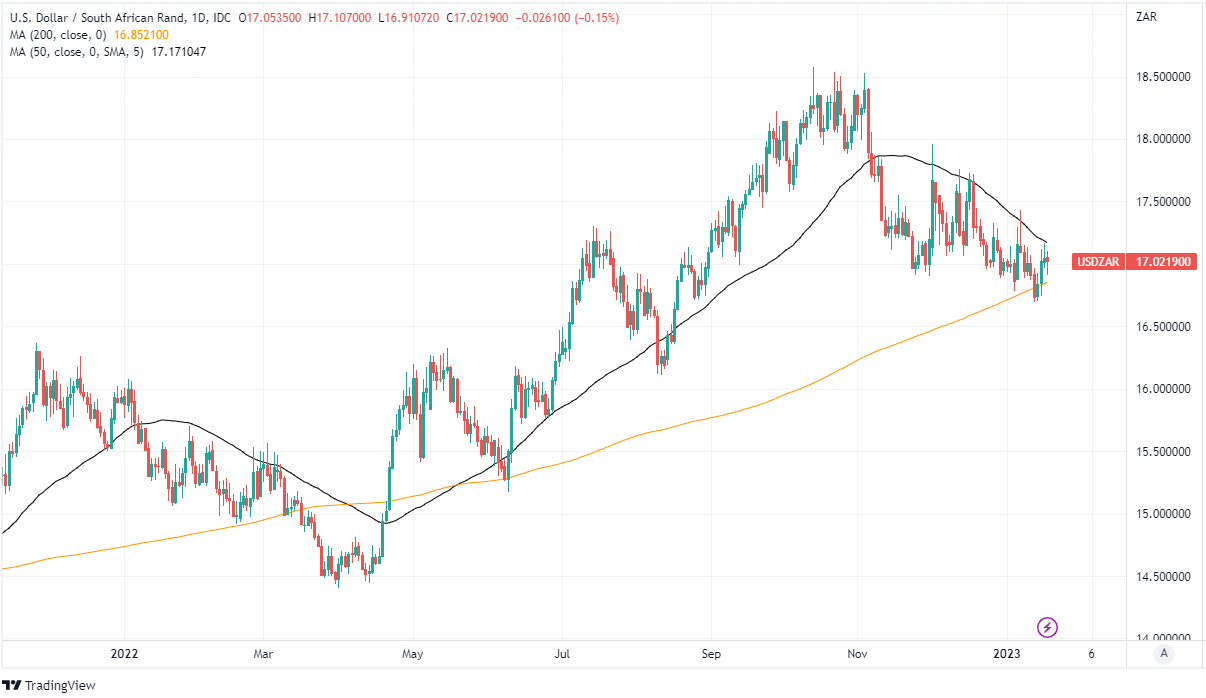 Above: USD/ZAR shown at daily intervals with selected moving-averages. Click image for closer inspection. If you are looking to protect or boost your international payment budget you could consider securing today's rate for use in the future, or set an order for your ideal rate when it is achieved, more information can be found here.