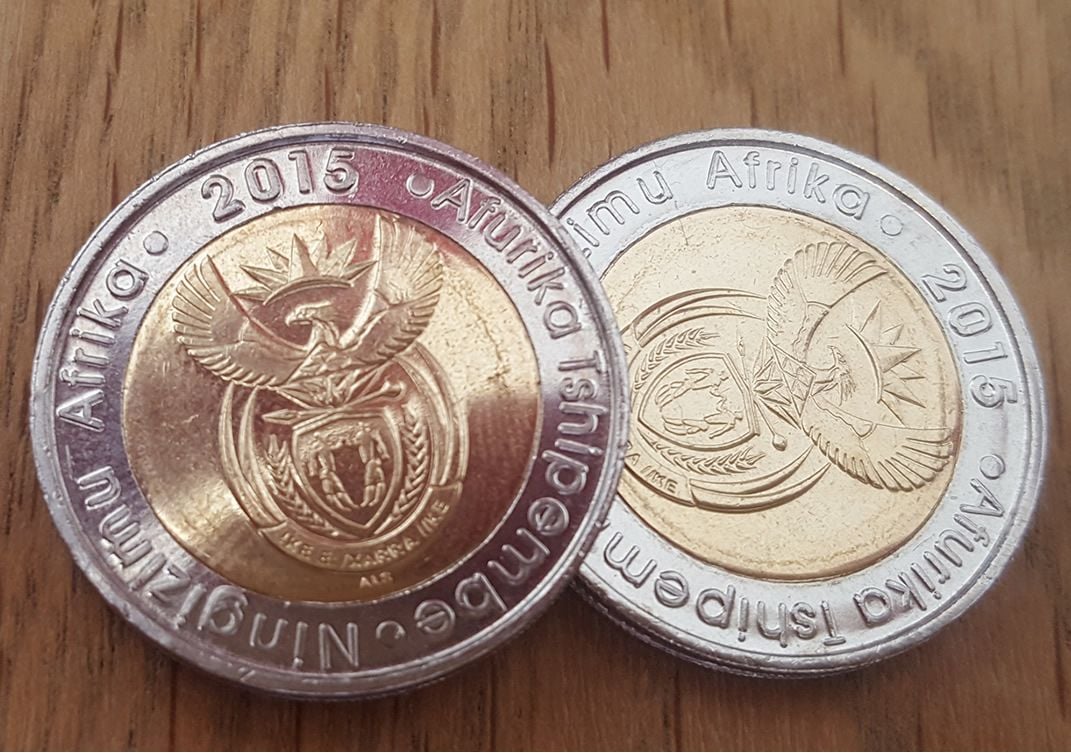 - Rand to be moved by risk markets and Moody’s conference

The Pound-to-Rand exchange rate is trading at around 18.15 at the start of the new week after declining 1.53% in the week before. Studies of the charts suggest a risk of more downside subject to a break below a tough zone of chart support at 18.00.

The 4hr chart - used to determine the short-term outlook which includes the coming week or next 5 days - shows the pair recovering after bottoming at the September 4 lows. 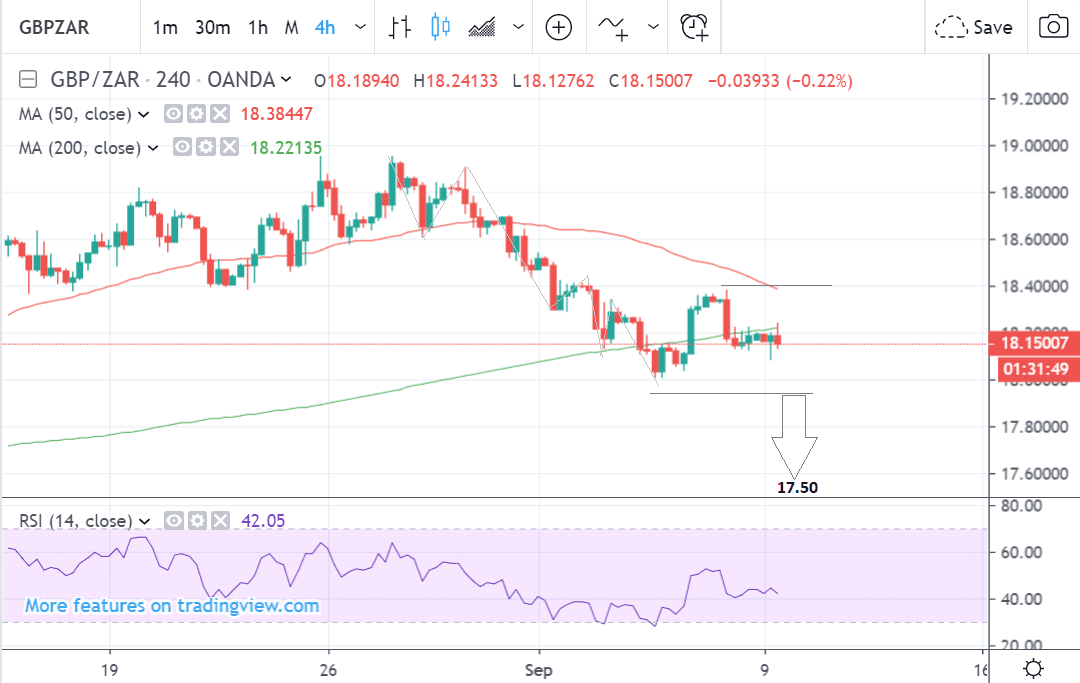 The recovery is not yet strong enough to indicate a risk of a reversal of the downtrend higher.

The pair has also managed to cut through a tough support zone between about 18.30 and 18.00.

Now subject to confirmation from a break below 17.95, it should simply continue lower to the next target at 17.50.

The daily chart shows the pair trading close to the level of both the 50 and 200-day moving averages (MA). These are components of the support zone in the area. 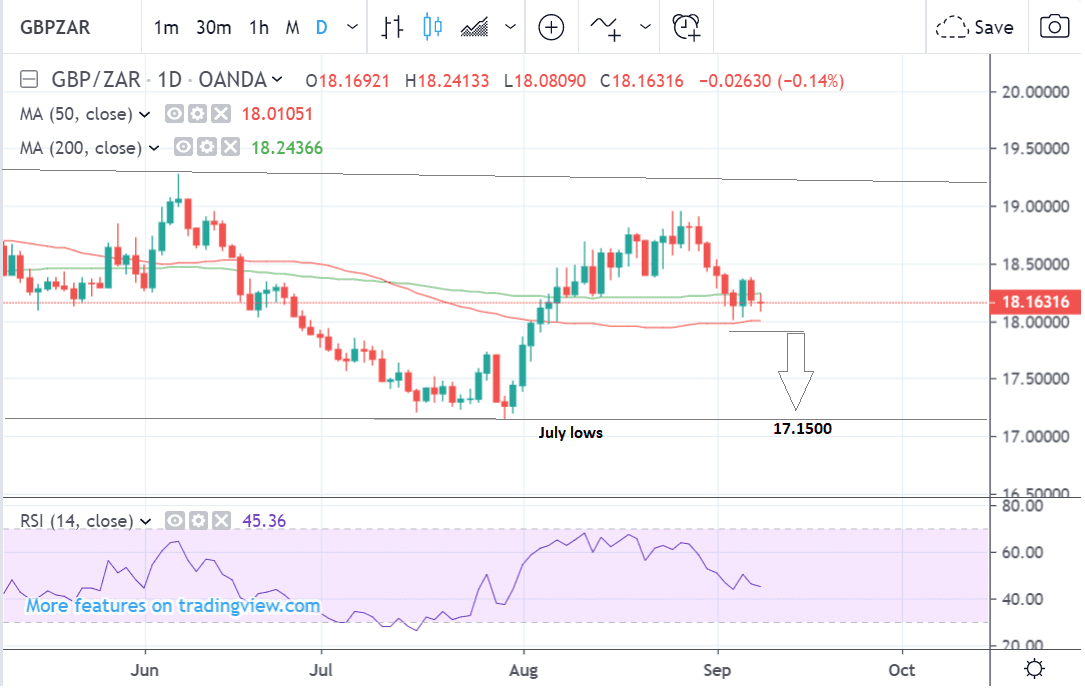 Assuming a successful break below the zone, confirmed by a break below 17.95 the pair could go all the way down to a target at longer-term range lows situated at 17.15.

The weekly chart - which is used to give us an indication of the outlook for the long-term, defined as the next few months - shows the pair in a large, long-term, sideways range. 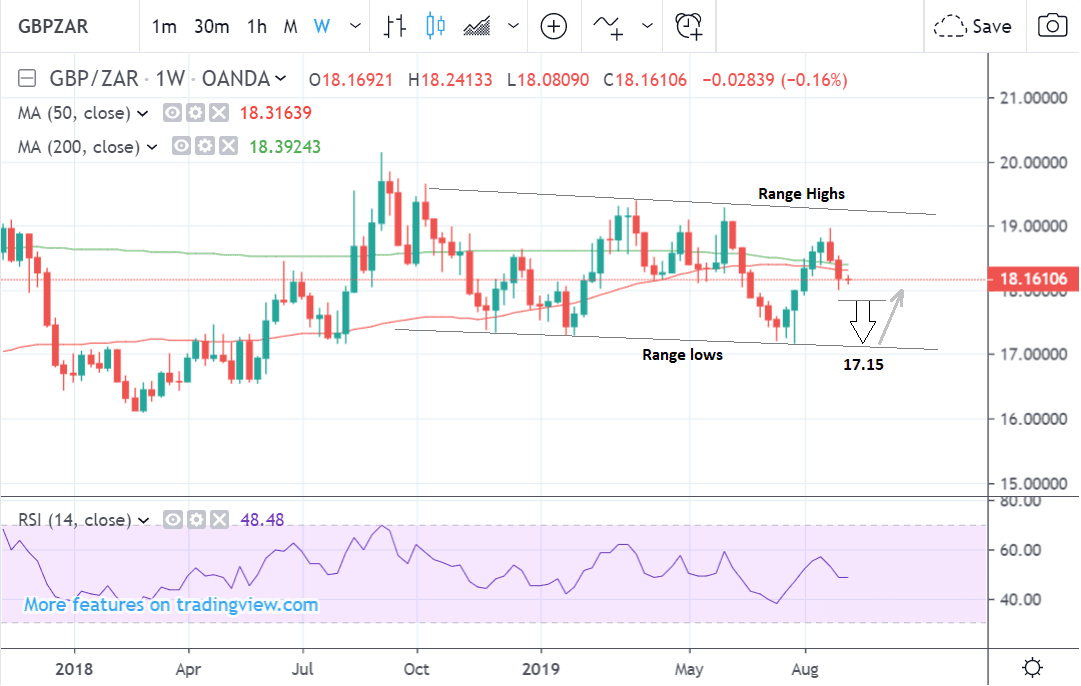 If GBP/ZAR successfully breaks below chart support at the current levels it will reach the July lows at 17.15 and then likely rebound.

The South African Rand: What to Watch

The main fundamental factors impacting on the Rand are insights gathered from the Moody’s conference on Tuesday, mining and manufacturing data, global risk trends and the U.S. Dollar.

SA’s credit rating sits precariously one notch above junk status and there is a risk it could fall if economic conditions deteriorate. If that happened the Rand would decline sharply due to massive outflows of foreign capital. Many global fund and investment managers are only able to invest in assets that meet a certain risk criteria, hence the downgrading of South African debt to junk status would invariably force them to sell their South African bonds, which would in turn place downside pressure on the Rand.

Moody’s is the largest credit rating agency and the only one of the three still assessing SA’s rating as above junk and therefore of 'investment grade', its conference on “South Africa Post Election: Threats & Opportunities to Credit Risk”, could well reveal Moody’s current views regarding the country, and whether they see the current rating enduring.

“The Moody’s invitation suggests that the conference will provide benchmarks for South Africa’s credit rating by reviewing the sovereign’s strengths and challenges compared to other sovereigns in the region, analyse the prospects for investment, examine the banking system and the corporate sectors’ strengths and challenges, and take a ‘deep dive’ into the credit linkages between the South African sovereign and its troubled state-owned companies, such as Eskom,” says Peter Worthington, an economist at ABSA. “Thus, the conference could provide some insight into what Moody’s will do on the scheduled biannual rating review date of 1 November.”

Another key driver of the Rand is likely to be the U.S. Dollar - to which is it highly negatively correlated - and global risk trends in general.

Risk aversion has eased recently after China and the U.S. agreed to trade talks in October and the People’s Bank of China (Pboc) unveiled another stimulus policy aimed at supporting its slowing economy.

These developments have helped the Rand and other emerging market currencies and weighed on the U.S. Dollar.

The improvement in risk appetite is in line with seasonal trends which show a pattern of risk aversion peaking in late August and early September, and then easing.

The seasonal bias appears to be playing out yet again, this year, as usual.

It has been reflected in a recent “shift in mood” in markets, “due to the de-escalation in the U.S./China trade war, the move by Hong Kong to remove the bill for extradition to mainland China, and the lowered odds of a no-deal Brexit,” says Michael Kramer of Mott Capital Management. “Suddenly the dense fog of gloom and doom of last month appears to be lifting.”

Another sign market risk may be easing is the VIX indicator which measures volatility and is looking increasingly vulnerable to further weakness.

“Now the risk aversion trade may be unwinding. The VIX, for example, had been trading in a range of 16 to 21 throughout August. But as of September 5, that measure of volatility is testing support at 16, and could be heading lower as fears continues to ease,” says Kramer.

Gold is a traditional safe-haven many investors buy when markets turn risk-averse and it has reached a key resistance level where it could pull-back.

Taken together these are all positive signs for the SA Rand. 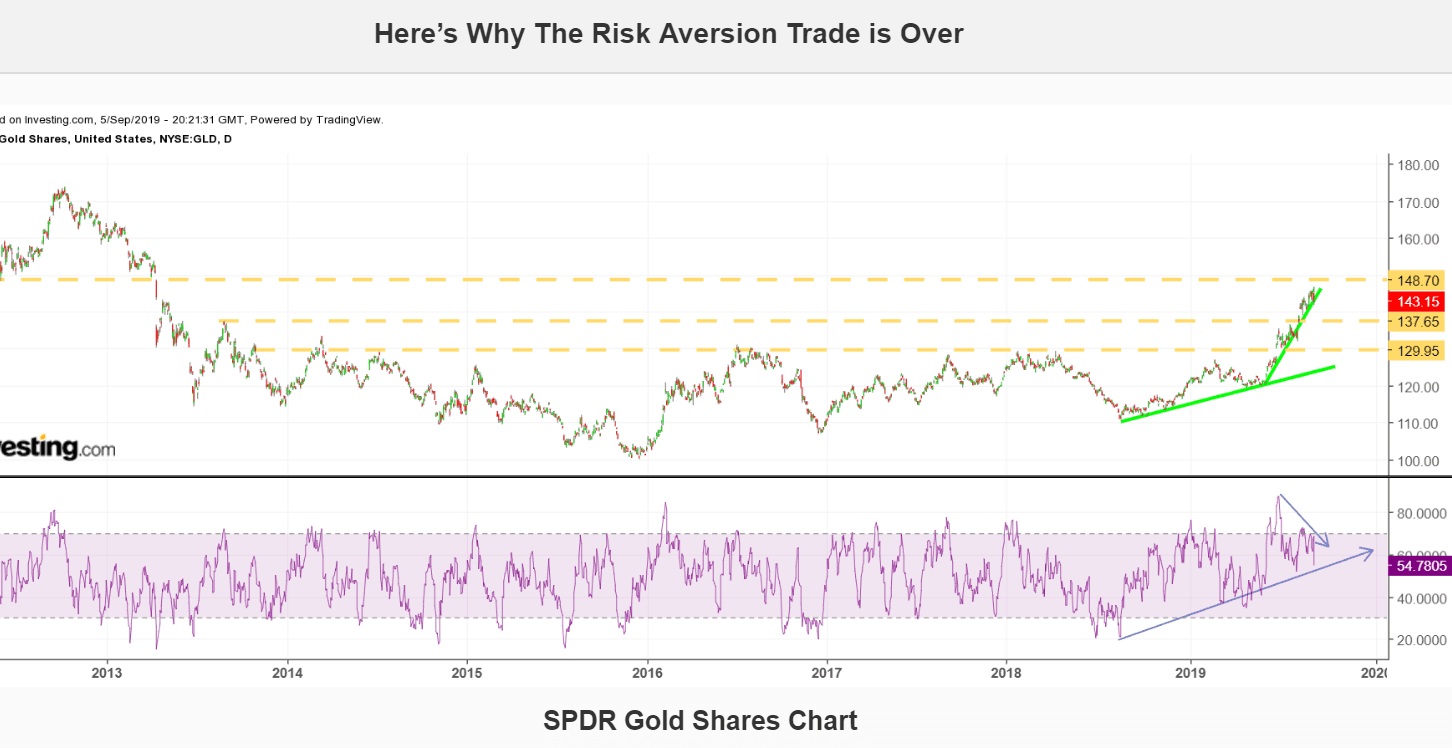 Although no major hard data events are scheduled for this week second tier releases will provide some early evidence for growth in Q3.

SA Manufacturing in July is forecast to show a rise of 0.4% when released on Tuesday at 14:00 BST. This would represent an improvement from the -1.5% of the previous month.

Mining data will probably show a reduction after a strong May and June result when it is released on Thursday at 12.30, according to ABSA’s Worthington.

“Mining production rose strongly by 3.1% m/m sa in May and 3.3% in June. These increases were mainly driven by PGM’s output where firms likely built-up stockpiles on concerns over a possibility of strike given the on-going wage negotiations in the sector. We think that output will fall in July as a result of some payback effects. We forecast seasonally adjusted mining production to fall by 4.2% m/m in July, which would be a relatively weak start to Q3 after production increased by 14.6% q/q saar in Q2,” says the economist.

Another key release will be the Q3 Business Confidence index out on Wednesday at 12:00 .

“The print comes after a surprise sharp increase in private sector fixed investment in Q2 of 15.2% q/q saar. Stats SA attributed this surge to spending on equipment and machinery in the quarter. It is hard to know if this represented a one-off development but the results of the BER’s business confidence survey will be a key clue into private sector business sentiment and the outlook for investment growth,” says Worthington.