- ZAR boosted by hopes that trade war escalation to be avoided.

South Africa's Rand ruled the emerging market roost Thursday amid renewed hopes the U.S. and China will return to the negotiating table, but the currency is tipped by Investec Bank to rise even further into year-end as the Federal Reserve (Fed) cuts U.S. interest rates.

The Rand is still down more than 6% against the Dollar for 2019 but was on its front foot Thursday after China's Ministry of Commerce said it is seeking to resume talks with the U.S. and that it'll send a delegation to Washington next month, in an apparent contradiction of its earlier line. The comments prompted a bid for risk assets including stocks, commodities, commodity currencies and most things in the emerging markets.

China, whose economy has been damaged by the a year-long trade fight with the U.S., is South Africa's top export destination and a country with which it runs a sought after trade surplus. That economy-boosting surplus has been threatened by damage done to the Chinese economy and a retrenchment among its consumers, so Thursday's comments are a boon for the Rand.

"This weekend will see the US and China both start to impose a new set of tariffs on each other’s goods despite the general bonhomie on trade," says Michael Every, a strategist at Rabobank. 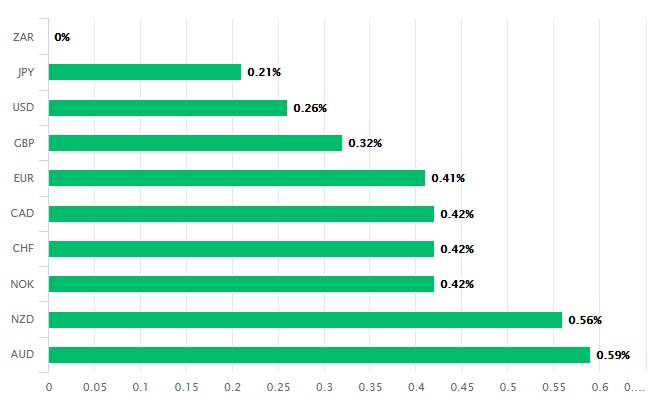 South Africa's close economic ties with China and its precarious financial position, which have seen the country threatened with the loss of its top credit rating,have often seen the Rand suffer disproportionately compared to other emerging market countries. But hopes of at least a lull in hostilities are now running high following last week's escalation, which saw both countries exchange tit-for-tat blows over a U.S. plan to clobber China's remaining exports to America with new tariffs beginning in September.

However, there are also doubts over whether the talks will lead to a true breakthrough. Some have branded Thursday's price action as a sign of desperation for good news on the part of the market. Nonetheless, Investec sees a silver lining for the Rand in any continued trade tensions because they could mean the U.S. Federal Reserve becomes more likely to meet market expectations for reductions to its interest rate.

"Trade developments this year also likely require additional insurance rate cuts in order to alleviate the risk-off sentiment that global markets have returned to this month, and such US rate cuts would likely support rand strength, particularly in Q4.19 and Q1.20," says Annabel Bishop, chief economist at Investec. 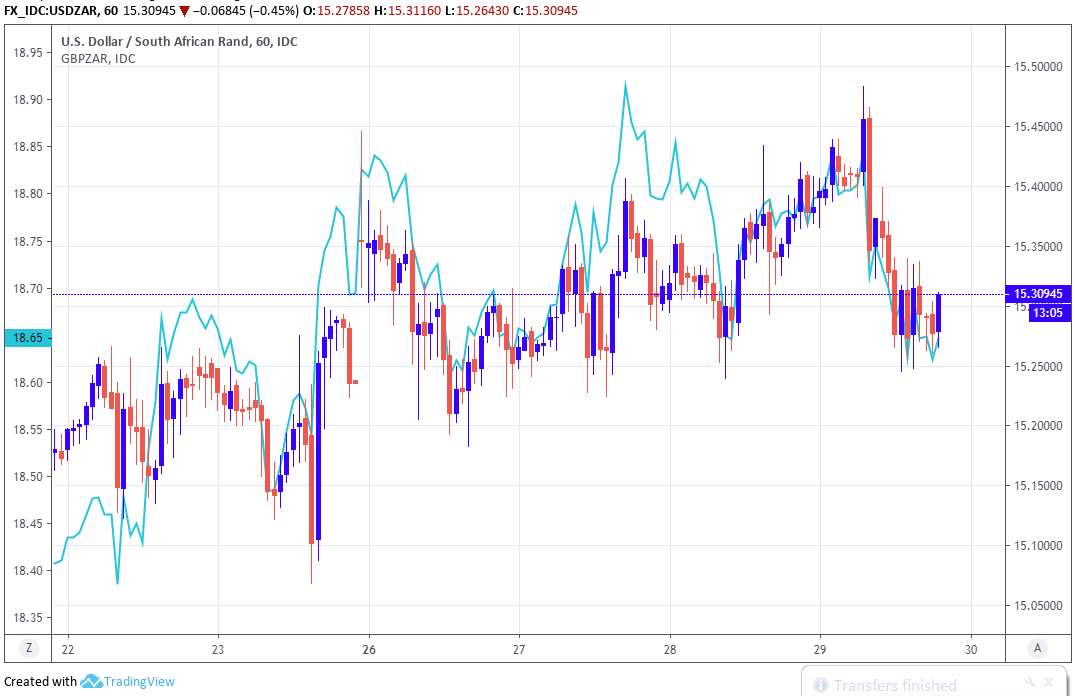 Thursday's developments are notable for the Rand because much about the outlook for South Africa's currency depends on events in the international sphere, with Federal Reserve interest rate policy and White House trade policy being particularly key. The Fed is itself a reluctant hostage of White House trade policy, although both of them have roiled markets this year.

U.S. interest rates are an important driver of Dollar strength as well as global borrowing costs, which matter for the Rand because they both make it more expensive for countries like South Africa to pay off their Dollar debts. The Fed raised interest rates nine times between the ends of 2015 and 2018, leaving the Fed Funds rate at 2.5% until July 31, when the bank reduced it to 2.25%.

"Subsequent to the July FOMC meeting, risks on the international trade front have escalated, more so over the past weekend, where the US threatened to raise tariffs on US$250bn worth of imports from China, and China announced new tariffs on US$75bn of imports from the US," Bishop says. "We believe the chance of a 25bp interest rate cut in October is building as well for the Fed(and is our expected case), with these cuts supported by financial market conditions and not those of the US economy." 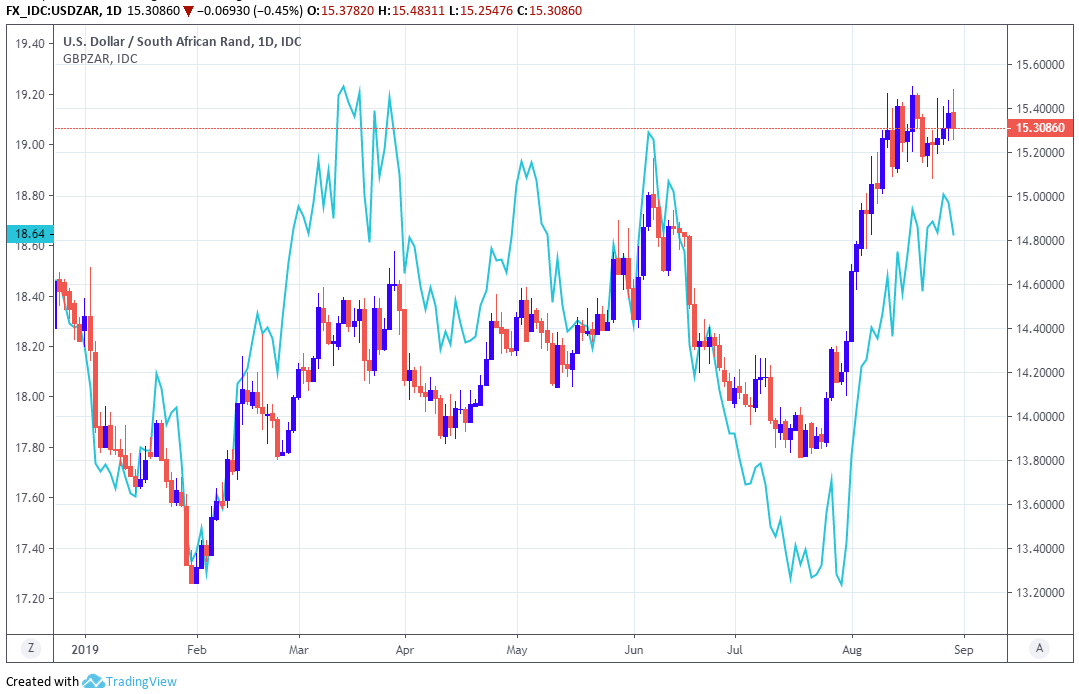 The strong U.S. economy has left the Fed reluctant to reduce U.S. rates even as it worries about the odds of a global slowdown eventually hurting the U.S., but financial markets have bet big on cuts being delivered, while President Donald Trump is heckling and berating the bank into such action on a daily basis via his Twitter account. Trump has stated that his motivation is both a desire to keep the U.S. expansion going and a need to address the strong Dollar.

A strong Dollar can have many effects on markets and economies, which were written about this week by Dario Perkins, a managing director at the London-based independent research firm TS Lombard. Perkins explained the underlying mechanics of these effects in a note to clients, where he suggested the fate of the current economic cycle might depend in no small part on the direction taken by the Dollar in the months ahead.

"A stubbornly strong dollar can be a problem for the global economy, restricting international trade, damaging the balance sheets of dollar borrowers, discouraging cross-border lending and hurting risk appetite," Perkins says. "It seems to have undermined global economic activity and triggered periods of ‘risk off’ in financial markets. And when investors are nervous about the market outlook they tend to seek safety in dollar assets." 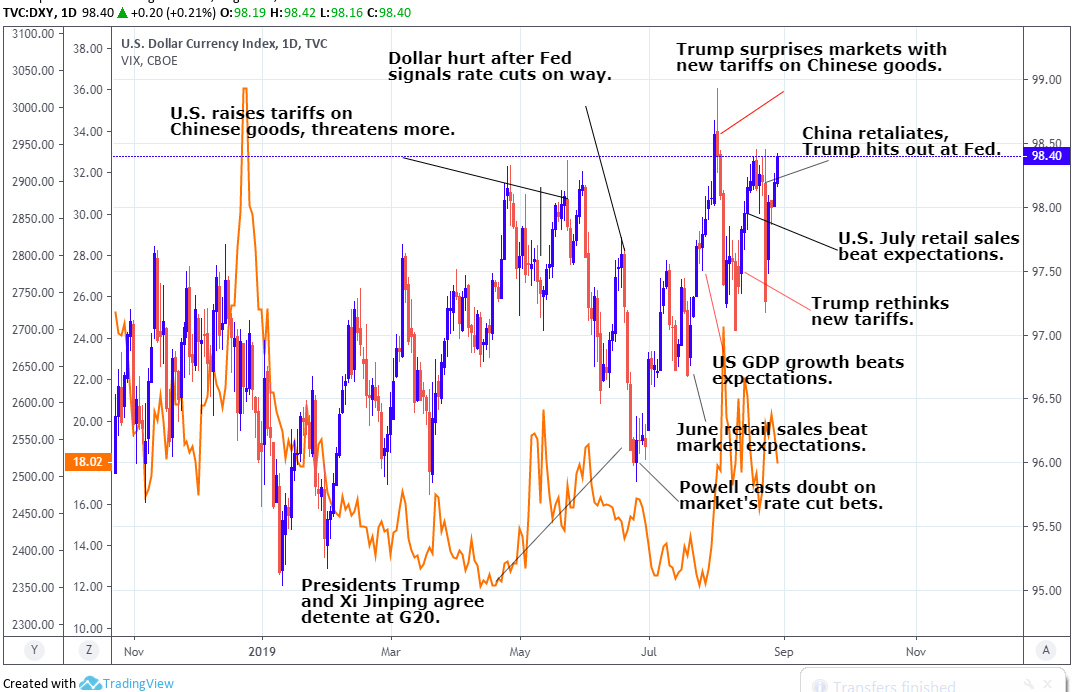 The Fed is key to the trajectory of borrowing costs in the U.S. and further afield, which impact growth the world over. And faster growth outside the U.S. is necessary for the creation of alternatives to Dollar investments, which are also necessary if the Dollar is to weaken.

Markets are pricing-in an 85% chance of a Fed cut in September, a 56% chance of another 25bp cut at the October meeting and a 42% chanceof a 25 basis point cut in December. Bishop says this level of cuts could provide a significant tailwind to the Rand, which is still forecast to rise against both the greenback and Pound Sterling before year-end and to continue its uptrend next year. The USD/ZAR rate is up 6.7% this year while the GBP/ZAR rate has risen 2.1%

"Factoring out these expectations would likely spark further EM currency weakness, and resultant volatility in the rand," Bishop says. "We continue to believe that the rand will remain volatile, and have revised down the expected case forecast for a somewhat more depreciated level as global trade tensions have worsened, and showlittle chance of resolving in the near term."