- Momentum is converging, market is oversold.

The Pound-to-Rand rate was trading around 17.38 on Monday after having fallen almost a full percentage point thus far in the new week, but studies of the charts suggest the pair will probably stall and go sideways in the days ahead as momentum wanes and Sterling hits a tough floor of support.

The 4-hour chart, which we use to determine the short-term outlook covering the next 5 days, shows the pair is trading just above a major trendline that is likely to provide support at around the 17.15-to-17.20 area.

The relative-strength-index (RSI) momentum indicator is converging bullishly with price and taken together with all the above-mentioned supports, strongly suggests the sell-off in the Pound-to-Rand pair could at least pause this week resulting in sideways trading.

Convergence occurs when the exchange rate makes a new low but the RSI does not follow. It is usually indicative of waning downside momentum. 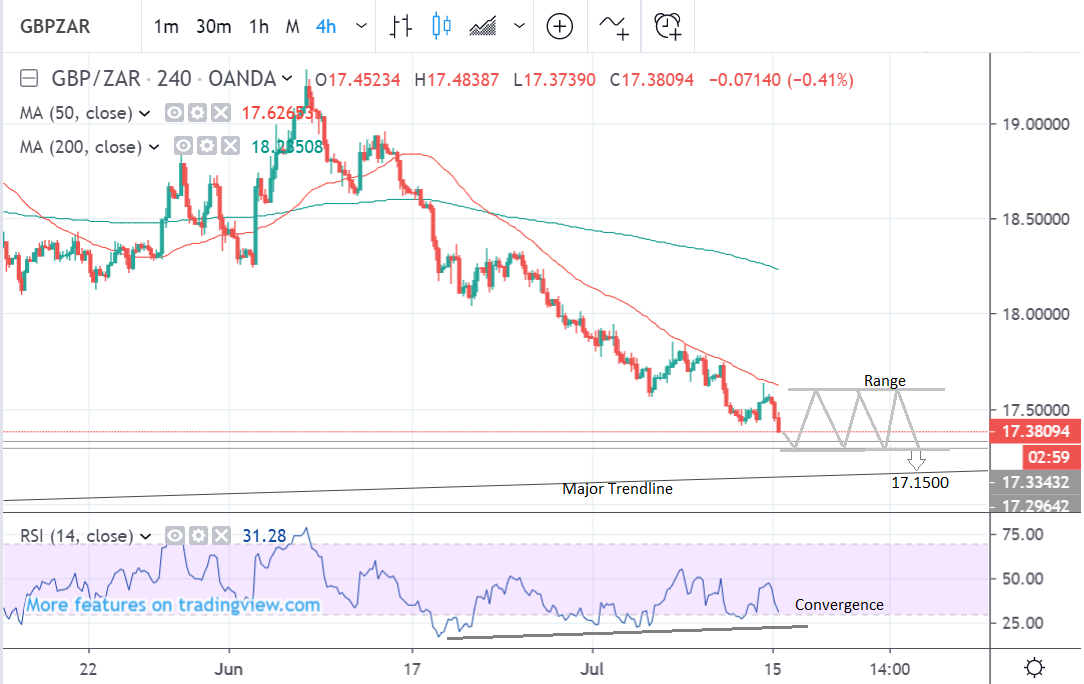 The daily chart shows the Pound-to-Rand pair is in a downtrend that has reached support at a major trendline.

The oversold RSI is indicating a heightened risk the pair could stall or bounce and taken together with the impending hard floor of support at the 17.15-20 level, also argues for a sideways range over the medium-term.

A clear break below the trendline, confirmed by a move beneath the 17.00 level, would probably lead to 16.55 and the May 2018 low. We use the daily chart to analyse the medium-term trend, which includes the next one-to-four weeks of price action. 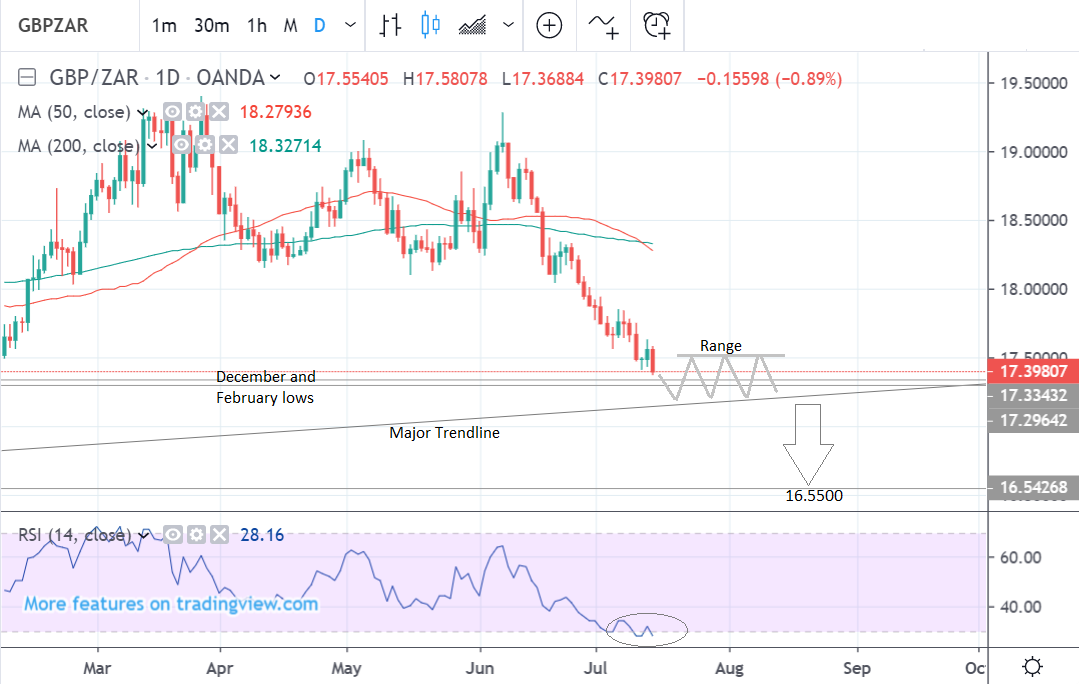 The weekly chart shows the pair rising in a channel over the long-term and casts the major trendline as the lower borderline of this ascending channel. The market is at risk of breaking lower over the longer-term, which we define as the next one-to-four months.

A breakout from the channel would be confirmed by a move below 17.00 and would indicate a probable decline down to the May 2018 low at 16.55. The RSI momentum indicator in the lower pane has fallen in line with price, which is a bearish sign. 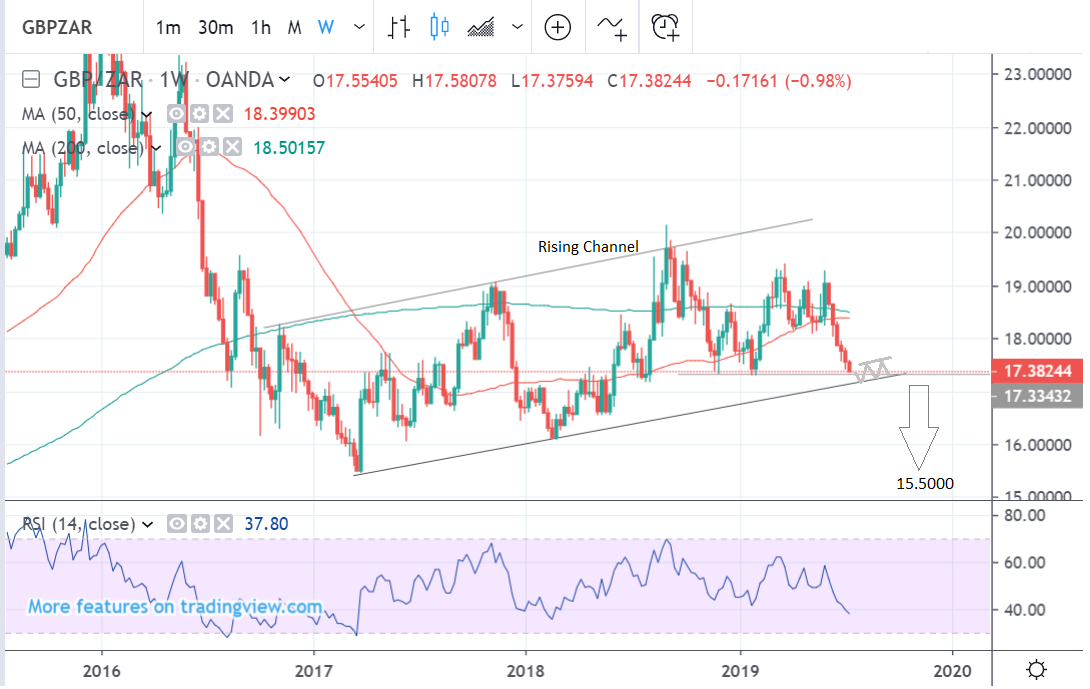 The main event for the Rand in the week ahead is the South African Reserve Bank (SARB) interest rate decision due on Thursday at 14.00 London time. The central bank is overwhelmingly expected to cut its rate from 6.75% to 6.5% due to subdued inflation, poor economic growth and a relatively strong Rand.

“We are confident that the SARB MPC will cut the repo rate by 25bp to 6.5% on Thursday," says Peter Worthington, an economist at ABSA in Johannesburg.  "Our view is in line with consensus but there are also a few analysts (4 out of the 30 surveyed by Thomson Reuters) calling for ‘no change’ while two are calling for a deeper 50bp cut.”

The Rand is unlikely to trade with much of an upside impetus given the looming rate cut. Currencies tend to move in tandem with interest rates so a cut is likely to weaken the Rand assuming that it hasn't already been priced in. Lower interest rates tend to dampen a currency as they make it less attractive to foreign investors who're looking for somewhere to park their money.

Of particular interest to Rand traders will be the SARB’s accompanying policy statement as well as commentary from Governor Lesetja Kganyago in the press conference after the meeting.

The current market expectation is for more than one rate cut so if there are hints in the statement from Kganyago that the SARB is not thinking about cutting more than once, the Rand might actually rise following the meeting.

On the other hand, a more pessimistic outlook that envisages more than one additional 0.25% rate cut then the decision would have the opposite effect and weigh on the currency.

The movement of the Dollar, which is negatively correlated to the Rand, could also impact the exchange rate this week when U.S. retail sales data for the month of June is released.

Only an extremely strong retail sales result would even begin to have an impact on speculation the Federal Reserve is preparing to cut U.S. rates, which is unlikely according to analysts. As such the Dollar seems more likely to fall in the week ahead, which might provide the Rand with some support in the process.

South Africa's own retail sales report is also out and expected to show a slight slowdown to 1.6% growth in June, from 2.4% previously. The data is scheduled for release on Wednesday at 11.00.